Saturday 19 May was a momentous day for me – my first parkrun since I donated my right kidney to a friend. I can’t tell you how good it felt!

My friend Kirsty suffers from a condition called Polycystic Kidney Disease, which is hereditary and passed on by her mother. Her youngest daughter also has the condition and will more than likely need to go through the same process later on in life. I am 36 and Kirsty is 42.

I have known Kirsty for around seven years. She started off as my hairdresser and she would pop round to my house to do my hair and we struck up a friendship. When Kirsty first told me about her condition she said that she would need a transplant in the future I said that I would have the blood test to see if we matched, and my husband also offered to be tested if I was not suitable. Each time Kirsty came round the time frame had dropped it was two years then all of a sudden it was a case of her being put on the deceased donor list whilst trying to find a live kidney donor.

Kirsty’s husband was tested and he was not a match then I was tested and the hospital said I was a 2-2-1 Mismatch, which is confusing, however this is a good enough match to start going through the process. If I hadn’t have donated the kidney, Kirsty would have been on the transplant list waiting for a deceased donor to be matched and on dialysis.

The process of donating a kidney for me seemed to go smoothly. I had my bloods taken at the James Cook University Hospital and I was allocated a fabulous nurse who took care of all my appointments and a running total of any expenses that I accrued during the entire process. I was given a full MOT which included the CAT scan and MRI scan, if I had anything going on inside they would have found it. My Transplant nurse was amazing and she was there for me all the time, she contacted me regularly just for a chat and to see that I was okay. I could have stopped the donation going any further at any point and that was made clear.

The transplant took place 4 April 2018 and I was in hospital for two days. I had Keyhole surgery which was performed by the Clinical Lead in Urology at the Freeman Hospital Newcastle Mr Soomro. I have five scars, four of which are very small incision scars from the tools used to detach the kidney, and a larger scar beneath the bikini line where the kidney was removed from.

Kirsty’s operation was more invasive and she has a large scar which she is very proud of and can’t wait to show off when she is able to travel again (strange girl!). The kidney was piggy-backed against Kirsty’s so she now has three kidneys, however as the disease takes hold there will just be the donated kidney working.

Everything went according to plan and the kidney started working straight away for my friend, which was fantastic. Who knew people got so excited about wee!

My recovery time was going to be around 4-12 weeks which is great going; my body may not fully recover until 12 months after donation but this is fine as I don’t feel any different. Kirsty’s recovery time is 3-6 months however again this is varied and may take a lot longer for her to be completely healthy again.

The post-surgery was painful but as each day passed the pain eased a little. The transplant has been a success and now we are moving forward to get on with our normal lives. Having only one kidney will not affect my day to day life, if anything I will be healthier now than ever as I will have yearly check ups to ensure I am okay. There is a slight chance that I could develop kidney disease in later life, but that is just a slight chance.

My doctors advised that I should be walking around but listening to my body to help recovery. Four weeks after the operation I walked Sedgefield parkrun with the Tail Walker who was amazing. I only managed one lap but that was the start. The next week I made it all the way round and as my good friend Tracy Williamson doubled back after crossing the finish line to walk with me I cried. I was so emotional to know that I was going to get over that finish line, the volunteers and supporters were amazing and I couldn’t have asked for more. My first run (jog) was amazing, running with my friends and feeling that this was a fresh new start. The volunteers are just amazing! 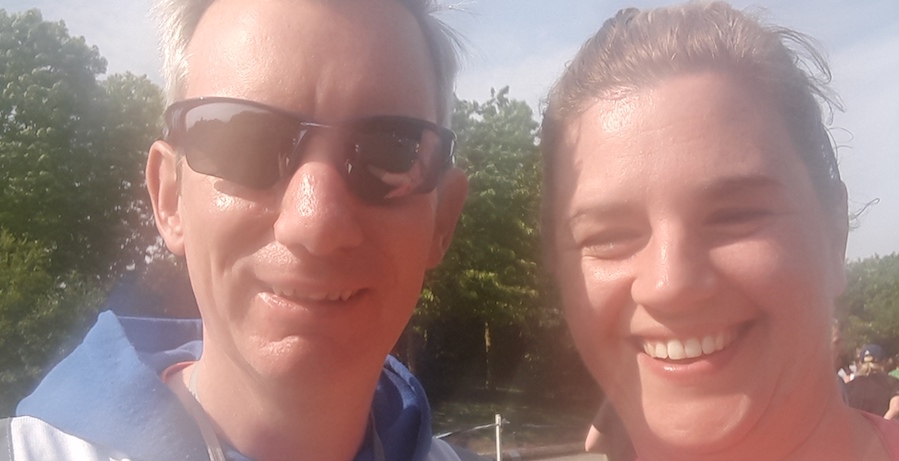 parkrun has been a part of my life for a number of years now and getting back to it after the donation has been amazing. I have good friends who made sure I was okay. parkrun has really helped me mentally as well as physically as I was starting to feel depressed being stuck in the house looking at the same four walls. Just getting to parkrun and talking to people and going for a cuppa and tea cake makes all the difference. I now have targets that I can use to get myself back to where I was or even be able to run a new PB – wouldn’t that be something?!

I have entered the 10k Race For Life which takes place on 1 July so I will be getting my training in. I am back to the early morning bootcamps and classes. Back to work and currently trying to get through a Level 5 Diploma in Leadership and Management. The company I work for have been really supportive too.

If you have ever thought of donating or if you are curious as to the process, speak to your local hospital department and they will be able to tell you all you need to know. Personally I can honestly say that I am proud of what I have done and I would encourage more people to step forward and think about donating. All the help and support you will need is available.