I remember looking through a running magazine just after I was diagnosed with Multiple Sclerosis (MS) in 2005. I cried when I saw an MS Society advert – I felt that in a moment I’d gone from being a runner to someone who people ran for.

I used to love running. I had run the Edinburgh Marathon (4 hours 42 minutes) amongst other things, and was very much a ‘fun runner’. My favourite event was ‘Race the Train’ in Wales and my 10k PB was 50 minutes.

There is no cure for MS. It is an autoimmune disease of the central nervous system (brain, spinal cord and optic nerves) in which the body’s immune cells attack the myelin sheath insulating the nerve fibres themselves. As pretty much everything we do is ultimately controlled by the brain, pretty much anything and everything can go wrong! For that reason everyone’s MS is different. Common symptoms include problems with mobility and balance, clumsiness, pain, incontinence, tremor, visual difficulties and slurred speech. The severity of the disease is also highly variable.

It is estimated that about 100,000 people in the UK live with MS. It is usually first seen in people in their twenties and thirties, but although there are now treatments to slow down early MS (it is best caught right at the start), many people living with MS today are too late for these and there is no treatment for advanced MS. For most people, MS starts with discrete attacks ‘relapses’ with periods of recovery ‘remission’ in between. As the years go by, recovery becomes less and less complete, long-suffering nerves start to die, and an irreversible steady decline sets in.

I actually kept running for quite a few years, but diminishing distances and I never entered another race again (had a drawer full of medals and out of pride refused to accept worsening results). Going to races as a spectator with my husband was hard and I quickly learned to stay away. It’s a pity parkrun had not reached Somerset back in 2005, as the non-competitive atmosphere and support would have been good for me. There must be lots of people with MS still running today, I hope they’ve all discovered parkrun!

I first heard of parkrun in 2015 when my husband’s daughter ran a parkrun in Leeds. I never ran a parkrun myself, this was well after my running days, although I do love exercise and the feel-good endorphins flowing through my brain when my heart rate rises. Not to mention all the other health benefits. I still swim and cycle tandem with my husband, and I also do some results processing for our local athletics club so still feel connected to the running world and I’m always encouraging other people to try running.

To get involved as part of the core team setting up the new Street parkrun was an obvious choice for something where I could usefully contribute and feel valued. More selfishly, my 18-year-old son started running a year ago and anything that gets half my genes out running at 9am every Saturday morning works for me! As part of the core team, we’ve all made sure we’ve tried all the parkrun roles and take turns to RD. The only thing I can’t do is help with pre-event set-up on the morning, so I make up for this by writing most of the run reports. My favourite job is barcode scanning as there’s chance to chat and get to know people better. 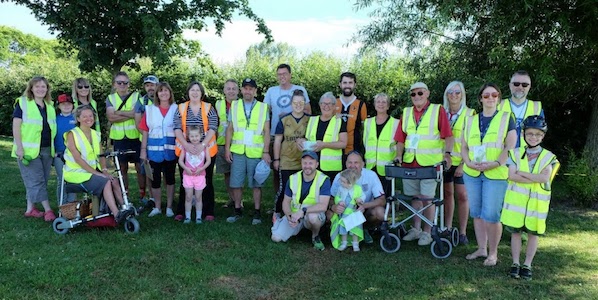 Today, I’m completely over the initial shock of diagnosis and having lived with MS for 13 years I fully accept increasing reliance on wheels to get around. Wheels are freedom and independence! Not that I’m a couch potato by any means! So you’ll understand where I’m coming from when I say I’m always trying to encourage other people to exercise and was super keen to get involved in setting up the new parkrun in Street.

My advice to anyone nervous about coming to parkrun for the first time? Come along, find a friendly face in a parkrun high-vis vest and ask if you can watch what they’re doing. You’ll soon feel part of the event and be encouraged to come back and run/jog/walk or sign up for a volunteer role yourself. It’s addictive and becomes a Saturday morning habit. And a great start to the weekend!

Personally, I had Initially envisaged going along maybe once a month but I love parkrun so much I can’t think of anything I’d rather be doing that early on Saturday morning. Being with other people, especially outside in the fresh air is good for the mind, and volunteering gives me a sense of self worth.

Street parkrun is entirely grass and, even with an all-terrain chair, extremely difficult to self-propel around (I know because I tried it!). I have huge respect for wheelchair athletes, self-propelling is tough, especially uphill. One week I might be brave and attempt a parkrun with a firm and flat course, but in the meantime I’m very happy to be one of the volunteers, smiling and cheering on everyone else.

parkrun has appointed two volunteer Outreach Ambassadors for MS who run a Facebook group for parkrunners with MS which you can join here.