I was six when I first went along to Southampton junior parkrun. My dad knew one of the people who was involved in starting the event, and he thought it was a good idea so he talked to me about it. I do a lot of dancing, and I back then I swam once a week.

I thought it was a good opportunity so I went along with my dad to the first ever Southampton junior parkrun in November 2013, and I have been every week except when I’ve had dance competitions. Sometimes I go with all my family, including my sister who has a condition called Rett Syndrome. She can’t run but she still loves walking round and being part of something that she can join in. Other times, mum or dad take me and my brother.

The course at Southampton is two laps. You do one lap of the field Including a small straight of trail section, then you do a second lap where you cut through the middle of the field. It is all on path, apart from the small trail section that occasionally gets really muddy. There are always lots of marshals on the course to cheer everyone on.

I have gradually got faster and for me I think of it as a chance to run away from my worries for a bit. I have made lots of friends from little children at the age of four to the adults who volunteer at the event. It is a great opportunity to be social and have some time with people you may never have met otherwise. I have also got into the school cross-country team and run races because of the running that I do at parkrun. 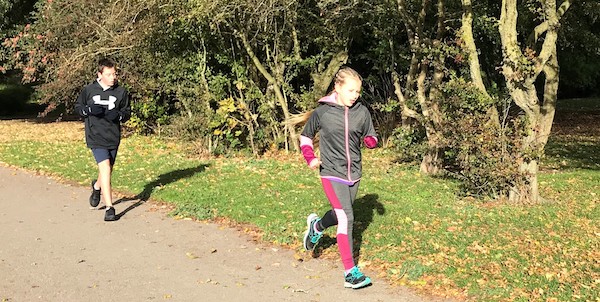 I have earned my 25 volunteering t-shirt and I have done a range of things from sorting tokens to collecting the cones and doing the first timers briefing. I love helping out and I get pleasure out of both the running and also keeping it on track.

I have had lots of funny moments at junior parkrun. At Easter we had loads of people bring in chocolate and there were two massive chocolate bunnies and the person who was first girl and first boy won a chocolate bunny. I was first girl. When I got to the finish it wasn’t there because it had been crushed and my brother and sister had eaten it! I am still annoyed about this now!

Another time, at Christmas, James who was Run Director dressed up as Santa and only I knew it was him because I went to the car and sat in it and I watched him go to his car and put on his Santa costume!

I would highly recommend junior parkrun to any other young person. It doesn’t matter how fast or slow you are, whether you want to run or walk or just enjoy the social side and being in the fresh air in a crowd of amazing people. To me, being at junior parkrun with my friends is more important than any milestone.