The inmates behind the world’s first prison parkrun

Every journey starts with a single step…

Six months after this email was sent, HMP Haverigg became the first prison in the world to host a parkrun and last Saturday they celebrated their first anniversary.

Wedged between the boundary of the Lake District National Park and the Irish Sea is a little strip of land barely the length of a parkrun. There lies HMP Haverigg, one of the 140 prisons and young offenders institutions in the UK.

It’s a land of contrasts. England’s highest mountains loom large on one side and beautiful white sandy beaches adorn the other. Enjoying either is a privilege not a right however, with the average annual temperature a chilly seven degrees and the exposed coastline providing little shelter from the howling Arctic wind.

The prison itself is not immune from the disparities that seem to be a feature of this secluded headland. Barely a mile down the road is the pretty town of Haverigg with its busy holiday park, in stark contrast to the barbed wire covered walls of the prison that bares its name.

Saturday mornings are no different. Beyond the eerie silence of the prison car park and the security checkpoint lies a corridor filled with the echoes of excited voices. This narrow passageway joins a concrete courtyard to the sports hall where the prisoners meet before parkrun and socialise afterwards with tea and coffee. You feel the atmosphere before you see anyone.

If you were led from the car park to the sports hall blindfolded, with no idea of where you were, when you were opened your eyes you could be forgiven for thinking that you were mingling with the masses at any other parkrun. And it is – free, 5k, every week, forever. But it’s what this parkrun represents that makes it so significant.

“We all have enormous pride in being the first prison parkrun and it’s great to see more and more prisons joining the parkrun family,” says Shane Spencer, who first floated the idea of bringing parkrun to HMP Haverigg and has been the Event Director since day one.

“When I initially got in touch with parkrun HQ with my idea I had no idea the impact it was going to have, not just on me but also the men in our care.”

Black Combe parkrun, as the event is known, is named after a prominent hill that can be seen from the outdoor sports field where parkrun takes place. In its first year it’s not only had a positive impact on the 300 prisoners and staff who have taken part as walkers, runners and volunteers – the benefits have extended throughout the prison environment at HMP Haverigg and far beyond its walls. A further eight prisons and young offenders institutions in the UK and Ireland now host parkruns, with two more set to launch this year and many more in the pipeline.

The sports hall in the prison is a hive of activity as 9am approaches, with around 25 prisoners warming up for their 5k around the prison field while a handful of others don high vis vests, get the equipment ready and deliver the pre-event welcome.

While physical activity programmes are not a new thing in the custodial estate, the prominence of volunteering at parkrun and the variety of roles available on a weekly basis adds an extra dimension to what is currently available. Prisoners deliver the event for other prisoners.

Richard, who is one of four inmates at Black Combe parkrun to have joined the 25 volunteer club, wanted to keep up his involvement after picking up an injury.

“The community spirit is great and my friends all take part so I volunteered as a course marshal, a timekeeper and then Run Director. For a weekend morning activity, parkrun is incredibly popular and has maintained its numbers whereas other sessions at the same time haven’t.”

One of the walls in the sports hall proudly displays newspaper articles announcing the launch of Black Combe parkrun as the world’s first prison-based event. There are also photos, printouts of previous results, the volunteer roster, weekly newsletters, parkrun blogs and letters from former prisoners who were introduced to parkrun at HMP Haverigg who now take part in the wider community. Because the prisoners don’t have access to technology, this is how they keep informed.

“The men here are very aware that they are part of parkrun history,” says Shane. The 44-year-old has lived in the area his entire life and has spent half of it working at HMP Haverigg. He was an officer for the first 11 years before moving into the gym as a Physical Education Instructor (PEI) in 2007.

“Saturday mornings have become a focal point for a lot of the men here and it is something they really look forward to,” he says. “The sense of camaraderie during each event is really encouraging and the fact that we fill our volunteer roster come rain or shine is testament to the pride that the men have in this event and their determination to keep it going.”

The course itself is eight loops of the prison field, with participants collecting a wristband on each lap. Aaron, who heard about parkrun at his gym induction, says his favourite role is handing out the lap bands.

“I enjoy the responsibility of organising and passing out the bands and encouraging and motivating everyone as they go by. I was proud to achieve my 25 shirt because it makes feel appreciated and part of a team.”

The enclosed route means that the inmates and staff can see each other from all points on the course, with encouragement and banter echoing around the yard. Malcolm, a regular Timekeeper, says he wanted to support the event after seeing the effort people put in.

“I love encouraging people at the finish line and shouting out to people when they set a new PB, and I’m definitely keen to keep volunteering when I’m released.

“I like it on the wing when people ask me what my purple milestone shirt means – I get a great feeling telling them. This is another way in which parkrun is succeeding at promoting social interaction and I think other prisons should get involved.”

Many of the inmates wear clothes and trainers that have been donated thanks to collections from local running clubs. A further boost has been the linking of Black Combe parkrun with HMP Haverigg’s medical facility, which has become an official ‘parkrun Practice’. These referrals, which see prisoners prescribed physical activity rather than a traditional prescription, is enhancing the event’s reputation as a health intervention.

“One of the key things for me is speaking to men who don’t attend the gym and encouraging them to try parkrun,” says Shane. “The changes to some of these lads is really significant, not just physically but mentally as well. It’s great to see their improvements – PBs are always nice – but the real benefit is to their health and wellbeing, including their attitude, mood and their behaviour on the wings throughout the week.

“parkrun has also improved the relationship the men have with each other and the staff. Some inmates who never would have interacted on the wings before have met through parkrun and socialise outside of Saturday morning.” 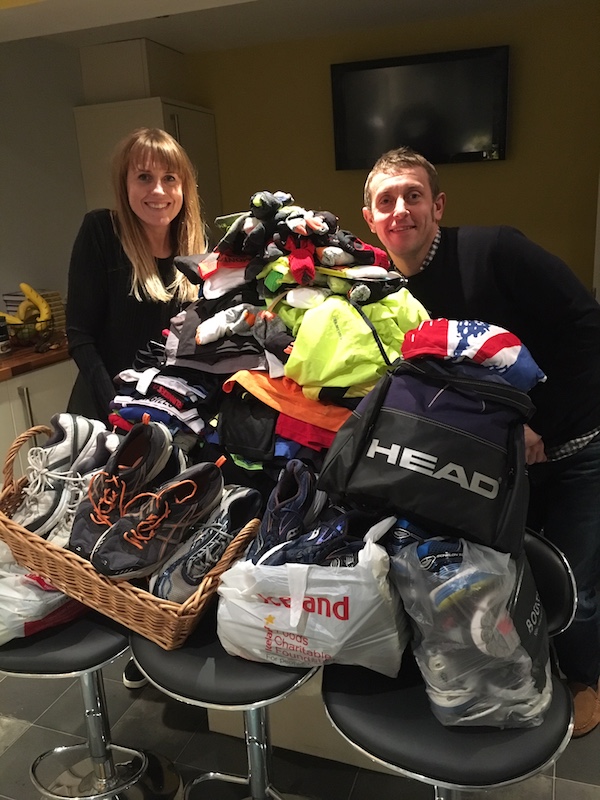 In addition to the volunteers who have joined the parkrun 25 Club, HMP Haverigg bought parkrun Apricot shirts to award to everyone who completes 25 events.

“The men take great pride when they pull on their milestone and apricot shirts and it’s a great added incentive to other participants. They also enjoy having the odd participant from outside Haverigg, such as a drug worker who was visiting one day. One of the lads taking part was due to be released that week, so the two of them ran their local parkrun together the following Saturday,” says Shane.

More than 800 different people have now completed a prison-based parkrun across the UK and Ireland and 310 have volunteered. Paul, who has volunteered 30 times, was encouraged to get involved by another prisoner. “I enjoyed the atmosphere, encouraging people and simply being outside,” he says. “I am certain that volunteering at parkrun will help me when I’m released.”

More and more stories are emerging from people who were introduced to parkrun while in prison who have carried on after release, including Alfy Kirkley who began parkrunning with his daughter. Alfy wrote a letter to his fellow inmate who first got him involved with parkrun telling him that it saved his life.

Six weeks after his release, Alfy and Shane met up to run a parkrun together and were interviewed by ITV News. Alfy explained how parkrun was helping him to reintegrate into society by providing a positive circle of influence, and was motivating him to run, go the gym and eat healthily during the week. For Alfy, parkrun was his focal point.

Earlier this week Shane was carrying out gym inductions with new prisoners that included one man who has been taking part in the HMP Wayland parkrun, which launched back in April.

“I told him he will be the first person to cross over from one prison parkrun to another. I have been waiting for this day, it’s absolutely brilliant,” says Shane.

“I have seen a lot of men come and go but what never changes is the positive attitude they all get from parkrun and that sense of achievement, whether it’s a new PB, running the full 5k or just completing their first one.

“It fills me with pride when I see them continuing with parkrun upon release and many send me a photo of them at their local parkrun. As more prisons and young offender institutions start their own parkruns, the positive impact will only increase.”

With special thanks to Shane, Richard, Aaron, Malcolm, Paul and Alfy.

You can read more about prison-based parkruns here.

If you work in a prison and are interested in starting a parkrun, please get in touch with us using this form.