Growing and caring at parkrun

According to figures from Carers UK, 6.5 million people across the UK are carers, supporting a loved one who is older, disabled or seriously ill – that equates to 1 in 8 adults who care, unpaid, for family and friends.

One of those is parkrunner Fiona Sefton, who is the primary carer for her son Adam, who has a learning disability. Fiona tells us how important parkrun has been for her wellbeing as a carer, and the role parkrun has played in helping Adam gain confidence and learn new skills.

“This week, parkrun are looking for stories about carers who use parkrun as a short break from their caring situation. If this applies to you and you are happy to share your story, please comment below. Thank you”

My initial response when reading the request above in the parkrun for people affected by Learning Disabilities and/or Autism Facebook group was “oh, that doesn’t apply to me because I run with Adam”.

But then I thought about it and realised that just because parkrun isn’t a short break from my caring situation, it doesn’t mean that I, as a carer, don’t benefit from parkrun in the same way as I would having time to myself.

I started parkrun in August 2013 with my son, Adam, as a way for both of us to keep active and get some more formal exercise into our week. Back then, as now, Adam would talk to me all the way around and constantly asks “How are you?” or “Are you OK?” or “Is it nice weather for running?”. After about 3k of our parkrun I am down to one-word answers, whereas he’s still going strong!

Fast-forward more than five years and together we have completed more than 160 parkruns, and it has become so much more than “getting some formal exercise”. It’s time for Adam and me, and sometimes his dad, to get some mum and son time. It’s not that we don’t spend time together during the week, but at parkrun we get uninterrupted time, one-on-one.

I have breaks from my caring role during the week, so I don’t need it on a Saturday morning and instead, I would rather have the time with Adam doing something we both enjoy and benefit from. I have completed around 20 parkruns without Adam but, to be honest, it doesn’t feel like a break because I miss his constant chatter!

Sometimes, when he is feeling good, Adam will decide to go off and leave me in the last 800m or so. If Adam finishes before me, he will go through the funnel, get his finishing token and get his barcode scanned without feeling the need to wait for me first. Now he does this week in, week out, and will then wait for me near the barcode scanners before going off to communicate with other people and socialise, while I catch up with other parkrunners.

This may sound like a minor thing for the majority of people, but for Adam it represents a big step, and shows just how far he has come. 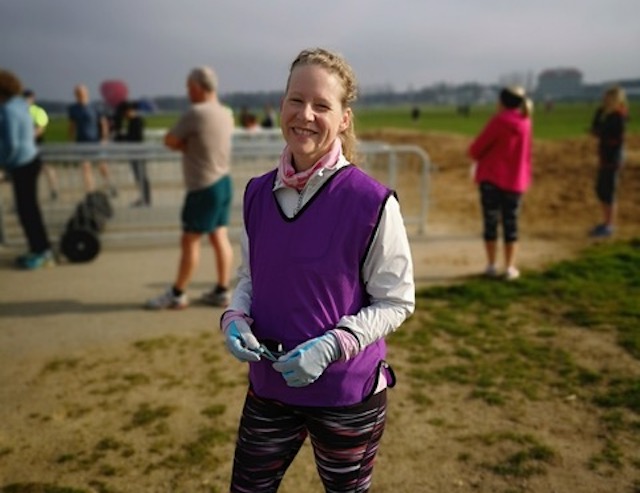 It’s not just the running at parkrun that has benefited Adam, and us as a family. If Adam decides that he would like to volunteer while I run, we are both confident enough to let him do that. And on days when we both volunteer, I no longer feel we need to do the same role together.

parkrun would never be a break for me if I wasn’t confident about where Adam was and who he was with, but I know that while I am running, the other parkrun volunteers will help him if he needs it as we are one big community.

Whilst parkrun doesn’t give me a break from my carer role, it has helped in so many different ways. I have met so many people and made so many friends whom I wouldn’t have otherwise, and lots of them have even offered to run with Adam, when he’s ready.

In fact, Adam has run without me once, last summer when one of our Run Directors asked if Adam would like to run with him to break the elusive 30 minutes… he not only broke it, he smashed it with a time of 28:06!

parkrun is a “safe place” for Adam which means that he is happy and comfortable and knows who he can go to for help if he needs it. But I think for me, the biggest benefit of parkrun is seeing Adam grow in confidence and learning and developing new skills, which he then transfers into other areas of his life.

He is gaining independence whilst still being protected. As his mother and primary carer, I couldn’t ask for anything more.