Ahead of Father’s Day this Sunday, we want to tell you about the inspirational story of a parkrunner who has taken on the Running Down Dementia mantle from her dad after he died a few weeks before the start of this year’s challenge.

Hayley Hawthorne’s dad, Stewart Waldridge, was a Running Down Dementia stalwart having taken on the challenge every year since its launch in 2016. He was inspired by his parents who both died with Alzheimer’s disease.

The Moors Valley parkrunner was planning to do it again this year, but he died suddenly in March, a day after his 63rd birthday.

His distraught daughter decided she would take on the challenge in his honour. She signed up for the 100km challenge but has already passed her target so has doubled it to 200km.

Hayley, who is a regular at Pontefract parkrun, has also created Team Stewart, with 11 people joining her in taking on the Running Down Dementia challenge in her dad’s memory.

They include Hayley’s sister, Emma Alford, who is using the challenge as motivation to get out and about having given birth to her daughter just three days after her dad passed away. 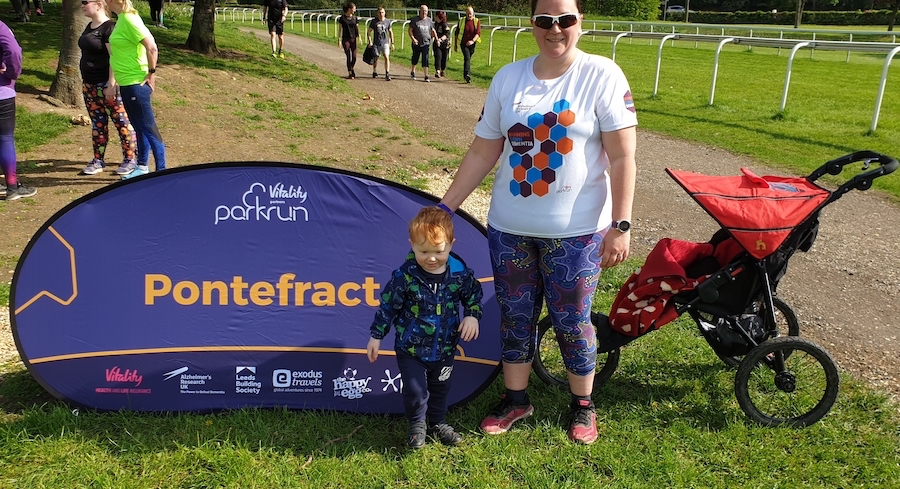 Hayley said: “Dad was an avid parkrunner and he and my mum were regulars at Moors Valley.

“He did parkrun for the first time at Bournemouth on the 27 December 2014 and went on to complete 163 parkruns at 13 different locations, from Rouse Hill in Australia to Inverness in Northern Scotland. Not long before he died, he also clocked up his 50th volunteer stint.

“Dad was passionate about parkrun’s partnership with Alzheimer’s Research UK because of the experience he had with his parents.

“My grandad died in 2010 having spent the last few years of his life in a care home. My dad cared for my gran until she died in 2016 and ensured she didn’t have to go into a care home. It was very stressful for him, it took over his life for a long time.

“He was an amazing, kind, down-to-earth man, who always put other people first.

“It was such shock when he died and I still don’t think it has sunk in yet. But doing Running Down Dementia in his honour is really helping me and I’ve been so overwhelmed by how Team Stewart has grown and the support we’ve received.”

You can sponsor Hayley here.

If you haven’t signed up yet for Running Down Dementia, there’s still time take on the challenge to run 100km (Pioneer), 300km (Epic) or your own choice of distance (Maverick) by August 31 and raise £100 or more for dementia research. Sign up here.

Meanwhile, this week we are running a special campaign called #ThisIsDad for Father’s Day, celebrating what makes our dads special and the moments that define them.

We’d love you to join in by posting a picture of your dad on social media and explaining why he’s so special. Don’t forget to use the hashtag and tag us in – we’re @ARUKnews on Twitter and AlzheimersResearchUK on Facebook and Instagram.