After the birth of her second child, Gail Seal was feeling overweight and unfit, and her confidence was at an all-time low. It took a year for her to work up the courage to go to parkrun for the first time. This is her story.

I just celebrated my 100th parkrun! It was a beautiful morning at the Walthamstow Peter May centre, the place where my running journey properly began around two and a half years ago.

I’ve been thinking back to the first time I heard about parkrun. My second child, Oscar, was still very young, and the preceding few years of pregnancies and sleepless nights had left me overweight, unfit, and with my confidence at an all-time low.

I joined a free Sunday morning fitness class in my local park, and the class leader, Sharron, told me that she was the Event Director of the local parkrun, and suggested that I might like to try it.

It took me a further year to work up the courage, but eventually, in February 2017 I went along, barcode in hand, to my first parkrun.

I saw very quickly that my worries had been for nothing.

Yes there were speedy runners, but there were all kinds of different types of runners; Mums with their children, guys pushing babies around in buggies, the run/walkers, the tail walker at the back making sure nobody gets left behind.

As I struggled up the hill a marshal shouted out that I ‘looked strong’ and that I ‘could do this!’ and I was overwhelmed by her kindness.

I finished that first parkrun in around 36 minutes, and immediately knew that I had to go back the next week to try and beat my time. I loved seeing the results stack up against my name on the website, and the text congratulating me if I managed to get a PB!

I started to see the same faces each week, people genuinely happy to see me progressing, people who taught me local running routes, and paced me to my first sub-30 5k, something I had been working on by then for over a year! 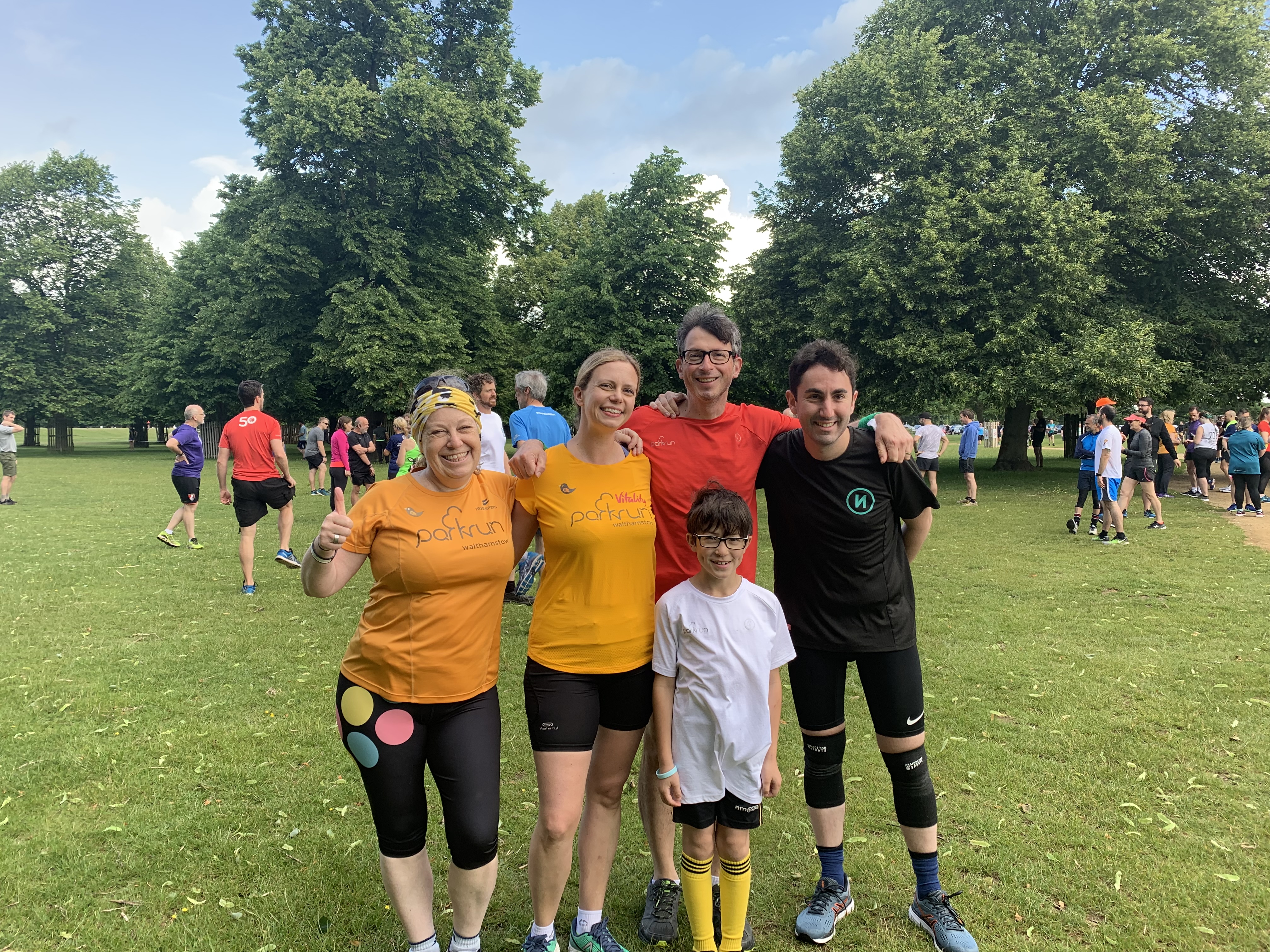 It was with the Walthamstow parkrun team that I went to volunteer at the London Marathon in 2018. I remember standing at the start line, cheering on the elite athletes and the waves of runners that flooded past after them, completely in awe of what they were about to do.

Little did I realise the chain of events that had already been set in motion that day: by volunteering, the team was rewarded with one place for the 2019 marathon, a place that would ultimately go to me, setting me off on a truly life changing experience of training for and running the London Marathon!

I started running longer distances by myself, but every Saturday I would come back to parkrun, the cornerstone of my weekend. I enjoyed visiting other venues whenever I was away from home, loving the familiarity of it all, even when in another country! My times were continuing to improve, with my PB currently standing at 24:22, and I don’t think I’m quite finished yet!

One Saturday I wasn’t able to run due to a lack of childcare, so took the kids along to volunteer with me. They loved cheering on the runners, so much so that they still clap and shout ‘great parkrunning!’ to ANYONE we see out running in public!

We have started attending junior parkrun on Sundays, and when they’re ready, I hope they will join me for the full 5k one day.

My only regrets about parkrun are that I wish I had discovered it sooner. I wish it had been around when I was younger, before my self-consciousness around being slow and uncoordinated nearly put me off sport for life.

How wonderful that we have this place where the achievements of the back of the pack are celebrated with as much delight as those of the sub-20 minute runners.

Where everyone is made welcome and encouraged, where people volunteer not out of obligation, but out of a genuine desire to help others enjoy it as much as they do.

parkrun has genuinely changed my life for the better, not just from the new friends I’ve made, but I’ve never felt so fit and healthy as I do now. The pictures of my progress over the last two years probably speak for themselves!