Two seconds at a time

Deborah Biggs was encouraged to take part in parkrun when the band she plays in staged a ‘parkrun takeover’. Here she tells us how she’s gone from being terrified, to not being able to wait for parkrunday every week.

I did my first ever 5k about five years ago, a Race for Life which I walked in about 55 minutes, weighing 22st 9lb.

It was the hardest thing I’d ever done.

I joined Slimming World a year or so after that, and as the weight started coming off I started jogging (late at night when nobody could see me).

In July 2018 the RAF Wyton Area Voluntary Band, alongside others from RAF Wyton, staged a ‘parkrun takeover’ at Huntingdon parkrun to mark 100 years of the RAF. The band played before the run began and as a member at the time I was asked to go along and play.

All band members were then invited to take part in the run, either by running/walking or volunteering, and my friends encouraged me to give it a go.

My fiancé Michael ‘ran’ with me and we finished in around 44 minutes. I found it so, so hard but for some reason I wanted to go back and do it again – and so it began!

I was terrified the first time, not of turning up and having a go, but of being overweight and slow and knowing I’d be right near the back and one of the last finishers.

I’m still slower than my friends and usually in the last 50 or so runners each week, but I’m improving and now I can’t wait for parkrunday.

I have lots of memorable moments – my favourite is probably the finish when I was really struggling and two of my friends came back to help me. I run as part of ‘Band on the Run’, from RAF Wyton, and the support I receive from them is phenomenal. It’s impossible not to find something extra for the finish when they’re all there shouting my name. 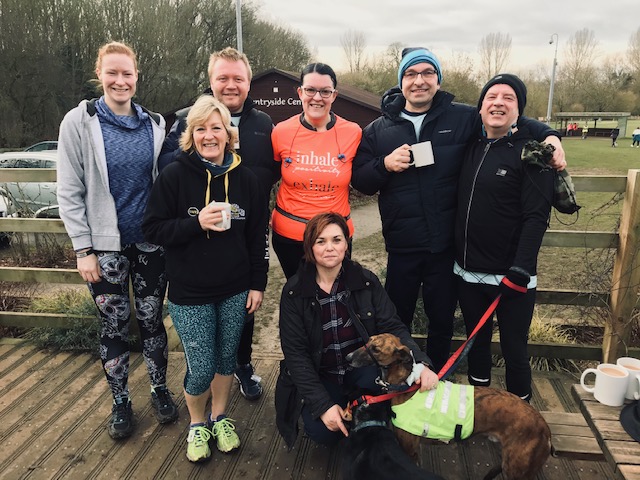 I loved ringing the PB bell for my fastest ever time of 36:20. I never thought I’d even get under 40 minutes and am super proud of myself.

We have an incredible volunteer called Henry at Huntingdon parkrun. He of the infamous ‘Henry’s Hill’, and he gave me a fantastic piece of advice a few weeks ago. He told me to always think ‘two seconds’. That’s all. If I’m tired and I want to slow down, or I can’t find that last push, I think ‘how will I feel if I miss my PB by 2 seconds?’ and it makes me keep pushing.

Next big aim for me is under 35 minutes. Two seconds at a time…