More than I ever imagined

Hannah Latham is on the core team at Alvaston parkrun in Derbyshire. Here she tells us how being willing to ‘just have a go’ brought a whole community together, and showed her that she was capable of more than she could have ever imagined.

The below photo is from one of the best days of my life: the day we launched Alvaston parkrun while simultaneously celebrating my 25th volunteering milestone.

It’s me and my sister literally jumping for joy. 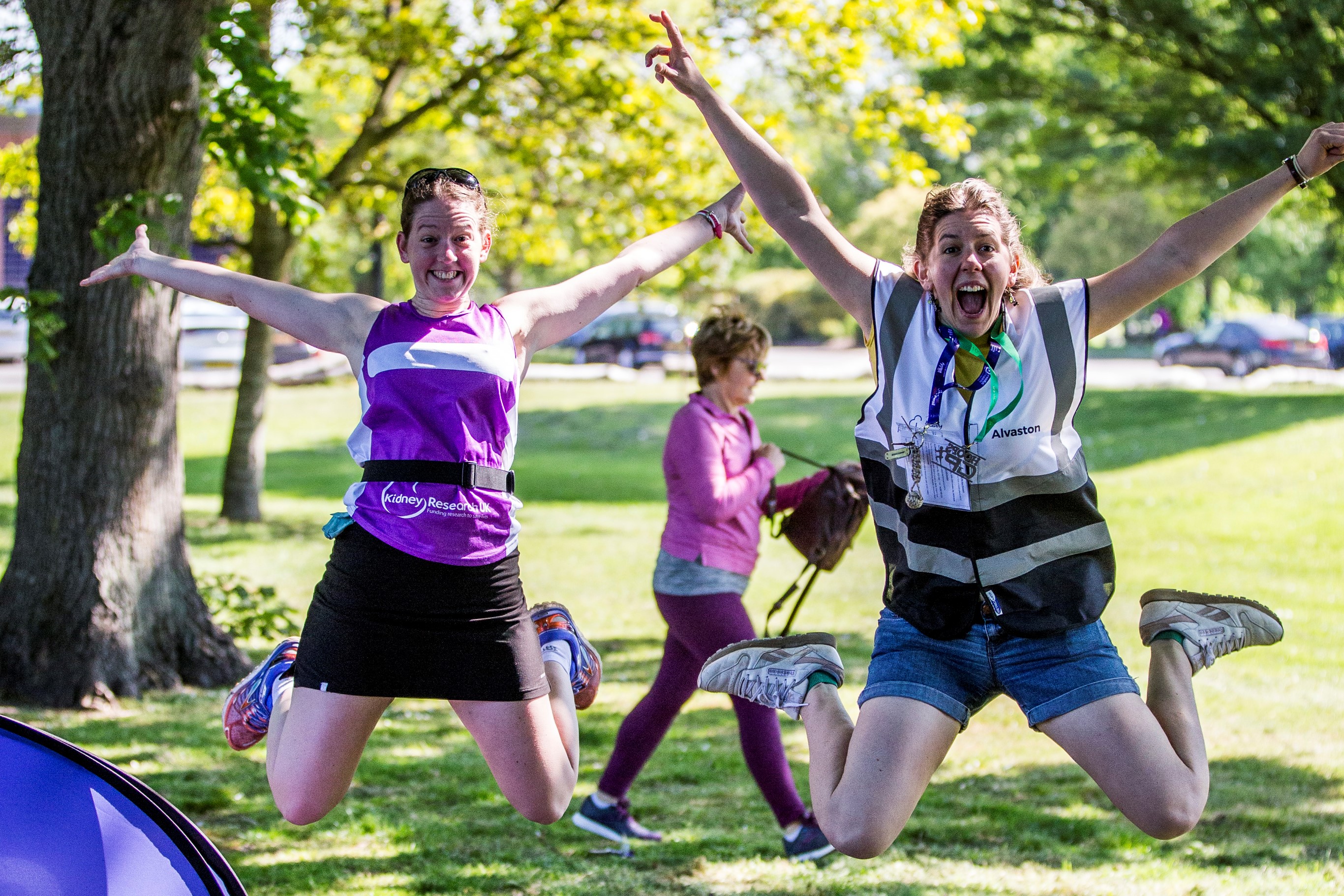 This picture always reminds me just how great it is to do something meaningful through volunteering, especially when you get to share that experience with other people. It also reminds me how sometimes we can surprise ourselves and do more than we thought possible.

I never imagined when I started this journey that you could become the Event Director of a brand new parkrun without being a “super experienced” volunteer (I hadn’t even got half way to my volunteer T-shirt milestone when I filled out the “interested in starting a parkrun” form). And yet by being willing to have a go and because a lot of other people were willing to have a go too, between us we started Alvaston parkrun and I became an Event Director.

“Just have a go” has kind of become my parkrun motto.

It was a friend of mine who suggested going to parkrun in the first place after helping me do couch to 5k. I remember telling him that I wasn’t good enough to go to a “running event” with “proper runners”. But he persuaded me to have a go and I was astonished to turn up and see a mass of “ordinary people” some of them with dogs, prams and children in tow.

Just over 18 months later I’d managed to run the whole thing in under 30 minutes and get my longed for red 50 t-shirt.

A few weeks later I saw something on Facebook asking for Run Directors at our local juniors. I didn’t even know junior parkrun was a thing but I thought if it was anything like the grownup version it would be great.

So I got in touch and basically said I had no idea what being a Run Director involved as I’d only just started volunteering but that I could “give it a go” if someone could help me learn what to do. And so I (and a number of other equally inexperienced volunteers) discovered that if you simply work your way through doing all the main volunteer roles you’ll pick up most of what you need to know. It might sound scary but the thing is you discover that there are plenty of people willing to help you if you get stuck. And it’s a great way to make new friends.

I hadn’t even got to my first go at Run Directing when our little “Run Directors in training” group had a memorable conversation in which we ended up discussing the rumour about a new parkrun in the area.

A year later on May 25th 2019 – just three years after I first turned up at Markeaton parkrun – we launched Alvaston parkrun.

The amazing thing is that on the day we launched I was completely new to Event Directing, not a single member of our core team (except me) had ever been a Run Director before and some of the people who volunteered at our inaugural hadn’t even been to a parkrun ever!

We’ve now put on 23 events and over 2,000 different people have visited and enjoyed our parkrun, which just goes to show what you can achieve without a lot of experience if you’re just willing to “give it a go”.

Seeing the difference parkrun is making in our local community and thinking of the friends I have made still makes me smile. And that photo is now in pride of place on my wall.

So what I’d say to everyone is: if the opportunity presents itself, even if you feel a bit nervous, why not try giving it a go because you might just find that you can do more than you imagine!

This week’s quick recipe fix is our Banana and Peanut Butter Smoothie, perfect for breakfast or brunch on the go.   Don’t forget to scan your Membership Card QR Code at your local event this weekend to receive your money off voucher!    In case you might have missed it – to celebrate the return…