Orangefield parkrun in Belfast launched in August 2018 and welcomes close to 100 parkrunners each week. 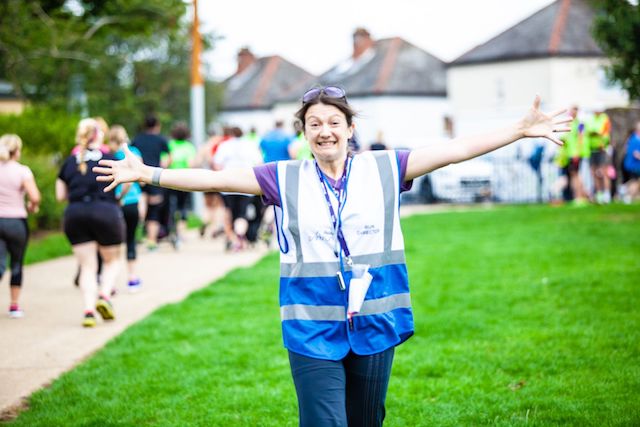 At school I was not considered ‘sporty’ and I carried this with me as an adult, but I slowly became interested in running, and a big part of that was accidentally discovering parkrun, which was so easy and accessible and fun. It just became part of my week to run and then also to volunteer, and I’ve since also got a couple of marathons under my belt.

I lapsed a bit with my running for a few years while I had children (though I did run Carrickfergus parkrun while pregnant!), but missed it and really it was my slightly selfish need to have a parkrun on my doorstep, rather than packing two children and a double buggy into the car each Saturday morning, that made me enquire about setting up Orangefield! 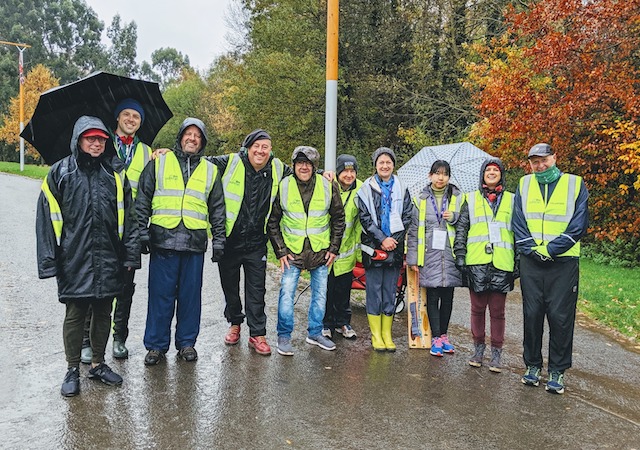 From the very beginning at Orangefield I have been humbled by how AMAZING the volunteer team are, to step up and support this brand-new event in the first place, and the utter dedication and brilliance they show each week. THEY are why I love our event.

Marilyn and Feena, in particular, have been there from the start and have gone above and beyond. There are many other superstars amongst the volunteers, walkers, joggers and runners here at Orangefield, and I’m incredibly grateful to them all; they have all grown this into a lovely community, a parkrun family 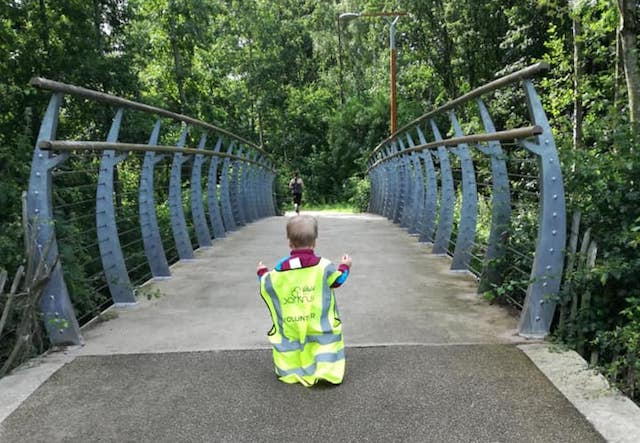 The course itself is mostly on paths, through a wee hidden gem of a park, with a bit of woodland trail to keep things interesting. Oh, and it’s surprisingly hilly…

The most famous landmark at our event is the pavilion because it’s where you can relax with a cuppa afterwards. We also have a super new play park, and a river that occasionally bursts its banks and floods Marshwiggle Way, leading us to use our backup ‘flood route’. 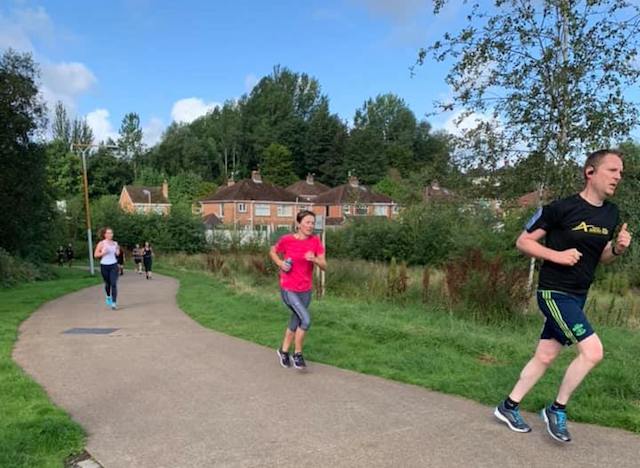 We love to welcome tourists to Orangefield and they will be in for a treat, whatever the weather, with such a beautiful park. We often have people from elsewhere in the city comment that they had no idea the park was there and how great it is, despite the surprise hills, and the friendly crowd roaring and cheering you over the finish line make all the difference.

We are very lucky to have access to the bowling pavilion in the park, thanks to Belfast City Council, and we offer tea, coffee, juice, biscuits and the occasional cake for free to volunteers, walkers, joggers and runners. 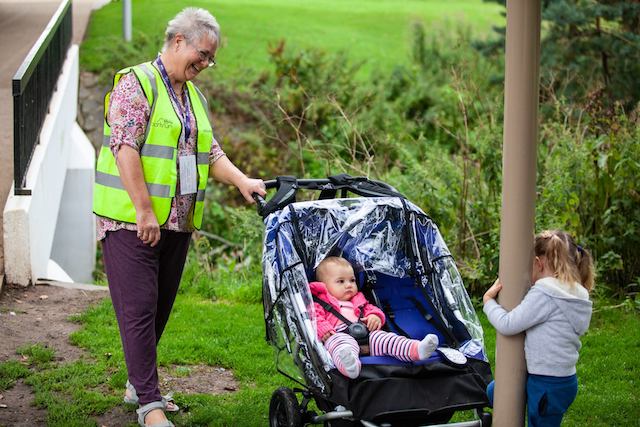 We’re part of the Connswater Community Greenway, which is a 9k linear park through East Belfast, following the course of the Connswater, Knock and Loop Rivers, connecting the open and green spaces. It links us with our neighbour, Belfast Victoria parkrun, and is a lovely additional community to be a part of.

We have multi-generational families participating as runners and volunteers, several with buggies (including triplets!), and we have several doggy participants too!

The park itself surprises people, as small and tucked away as it is, it is home to a huge amount of wildlife as well as playing fields, a bowling green, tennis courts, soccer pitches, a cycling track, outdoor gym, and the brand-new playpark. Three bridges intersect the park, Collier, Avalon and Kingfisher, and our route crisscrosses over them all.

We have an amazing volunteer team with many superstars, but one, in particular, has given more than any other, Marilyn. She has been with us from the beginning and is there most weeks, often as Run Director, sometimes in another key role, occasionally running, and always on hand in the week to chat and support others in the team. 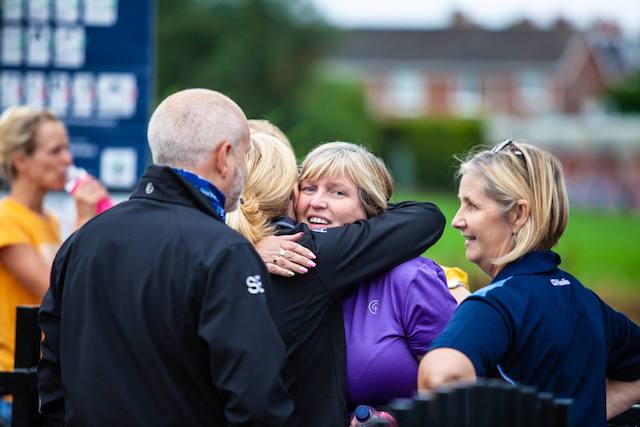 She has been instrumental in encouraging other people to volunteer as well as cheering people on as they participate on the day. I often worry that Marilyn gives too much, but she insists she has nowhere else she would rather be!

Marilyn is an extraordinary person, who has experienced huge grief and loss in her life that triggered a long battle with anxiety, a battle that she ultimately won because she is determined and strong!

She did this long before parkrun was a part of her life, but parkrun, including running and volunteering and cheering people on and calmly managing the event each week, is part of the continuation of that. 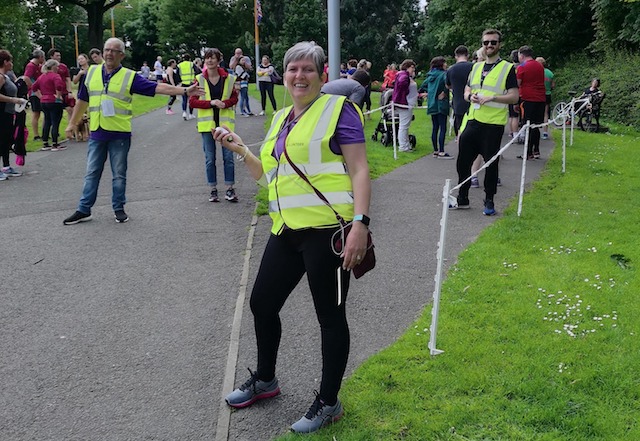 The first parkrun on the island of Ireland was in Belfast, at Waterworks, and we now have several in the city itself as well as further beyond. It’s amazing to see the reach parkrun has had, when I mention it outside of our event I’m often met with excitement about how fantastic and enjoyable it is.

We also find that many of the local couch to 5k programmes come to us for their 5k graduations, and it’s a great excuse for extra celebrations. Long may it continue!

1. The promoter is: parkrun UK (company no.09411750 whose registered office is Lower Deck, Unit 3, Phoenix Wharf, Eel Pie Island, Twickenham, TW1 3DY)   2. The competition is open to residents of the United Kingdom, with UK addresses, aged 18 years or over except employees of parkrun UK and their close relatives and anyone…