Where my heart is

The parkrun practice initiative now has more than 1,500 GP practices partnered with their local parkrun, ‘prescribing’ local events to help improve the physical and mental health of patients and healthcare staff.

Building on the success of the initiative here in the UK, the Irish College of General Practitioners has now announced the launch of their partnership with parkrun Ireland.

General Practitioner Simon Tobin tells us more about the transformations he has seen in his practice.

What’s parkrun ever done for me? Well actually it’s changed my life and the lives of many of my patients too.

As an NHS GP for 25 years I’m fully aware of the physical and mental health benefits of parkrun.

My practice was the first in the country to become a ‘parkrun practice’, as part of the initiative launched by parkrun and the Royal College of General Practitioners (RCGP) in June 2018.

I’ve now signposted more than 150 patients to my local parkrun in Southport and have seen firsthand some astonishing improvements in people’s health as a result. 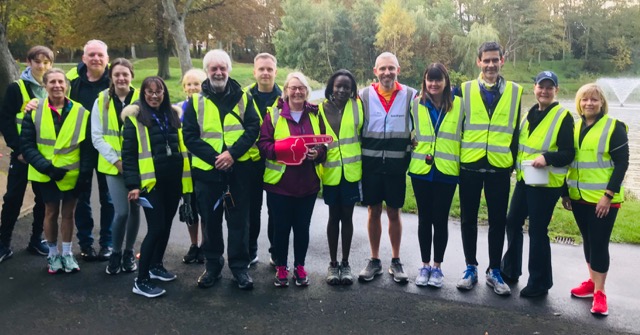 It’s hard to think of a medical condition that physical activity won’t improve – I’ve seen people with diabetes and high blood pressure take control of their conditions and reduce or stop their medication. I’ve seen others find their mental health is better and no longer need antidepressants.

Interestingly, parkrun’s recent UK Health and Wellbeing Survey shows that the benefits of volunteering may add even more impact than running, jogging or walking with 84% of volunteers reporting an improvement in their happiness.

I love asking volunteers I meet at parkrun if volunteering has made a difference to their lives and their answers are often enlightening.

A regular volunteer told me that following the death of his wife a few years ago he became much more isolated, stopped going out and had lost contact with many of his friends. He said he was ‘in danger of disappearing’. Encouraged to volunteer by his parkrunning daughter he now looks forward to meeting with his friends each weekend.

Another volunteer who is challenged with overwhelming anxiety at times told me ‘volunteering at parkrun has revolutionised my life’.

Many of our volunteers are students. Usually in their early teens they arrive shy, self-conscious and feel embarrassed to speak to people outside their own age group. We start them off as marshals and as their confidence grows give them roles with more challenge. It’s wonderful to see a previously timid volunteer bossing the finishers around in the funnel.

I worry a lot about people on the margins of our communities, who feel disconnected due to poor mental or physical health, bereavement or shyness and I wonder what we can do to connect with them.

I can think of a number of volunteers who felt socially isolated having moved to a new area. Making friends in a new town is challenging, particularly for people who are shy or introverted. I’ve seen volunteers connecting over a post-run coffee whilst token-sorting, develop new friendships and who now meet during the week for a coffee and a chat.

A volunteer (now a good friend) told me that ‘volunteering has been a real lifesaver’.

Many times I’ve noticed how parkrun can be an amazingly powerful catalyst in helping our fragmented communities begin to reconnect and strengthen.

It’s a basic human requirement to feel wanted and to be useful. Time and again I’ve seen volunteering fulfill this role, often for people who had come to think that they had little left to contribute to society or their community.

Another volunteer told me that she volunteers to show her support for her daughter. She explained that her daughter has achieved some astonishing personal health goals at parkrun. After coming along to spectate, before long she found herself volunteering, which has given her a tremendous sense of fulfilment. We now we have two  people healthier and happier as a result.

For me, I still love to run but volunteering is where my heart is. At parkrun I’m surrounded by friends new and old, as well as those I’ve yet to meet.

I’m excited to be a tiny part of a world-wide revolution.

As a doctor, I feel more deeply rooted in and connected with the community I serve than ever before.

Time to get in the zone – five things you need to know when training during lockdown 3.0

Lockdown 3.0 has given us a chance to redefine our comfort zone and what this means to us. Many have taken up baking, some may have reignited their creative flair and taken up art, whilst others may have upped their fitness game and taken on a new challenge.   This could be taking part in…