Farook Mota is Co-Event Director at Gloucester City parkrun.  A passionate parkrunner, Farook loves bringing people together and helping increase the levels of physical activity in his community.

He got in touch to tell us about fellow Gloucester City parkrunner Rob. Rob lost his hearing and eyesight and used parkrun to help rebuild his confidence and independence.

Before Rob lost his eyesight and hearing he had a full time job with a major retailer and a successful nine year career.  Life was as normal as it could be.

Then in an instant Rob’s world was turned upside down.

Rob has a chronic and rare neurological condition. In late December 2013, he started suffering with migraine type headaches and experiencing flashing lights in his vision.

Within six weeks Rob had completely lost his eyesight and hearing, and with that his independence and his job.

For anyone, losing a job or experiencing any other setback in life, it’s extremely difficult to accept and move on but also having to cope with losing one’s sight and hearing at the same time is unimaginable.

With the stress of having lost two fundamental senses as well as his independence, confidence, fitness and a lot more; Rob started putting on weight and getting out of shape.

In May 2016, he decided he had to do something about this and started chatting to a friend who knew that Rob had an interest in running. This friend mentioned this thing that happens on a Saturday in Cheltenham called parkrun; which Rob had never heard of before.

After a lot of conversation Rob was persuaded to go along and see what this parkrun thing was all about. He was really excited but understandably very nervous at the same time.

He went and was immediately surprised and taken aback by the friendly and supportive atmosphere, where everyone was encouraged regardless of ability. The volunteers and fellow runners were amazing.

On 4 June 2016 Rob turned up for his first parkrun and finished with the help of a guide in a time of approximately 43 minutes.

He went on and eventually ran his 50th parkrun in Cheltenham two years later. With his Guide Runner Robert, Rob bagged a PB of 34 minutes to celebrate his milestone.

He’s ran 51 parkrun events in total at Cheltenham and has also gone on to be quite a parkrun tourist. In April 2018 Rob ran his first parkrun at Gloucester City and has now run 26 events with us, mostly with Guide Runner Robert. They do love the course. Robert and Rob know the it very well and Rob has made Gloucester City his home parkrun.

With Rob’s amazing determination, together with the encouragement and support he gets from the parkrun community, he continues to improve his times. Rob amazes himself and others, week in week out.

Rob said that he would not have been able to do this without the help, support and encouragement of the fantastic parkrun community.  Rob also credits the parkrun community for all the new friends he’s made.

On 19 October Rob did his 100th parkrun at Gloucester City; a place that feels to him like a second home. 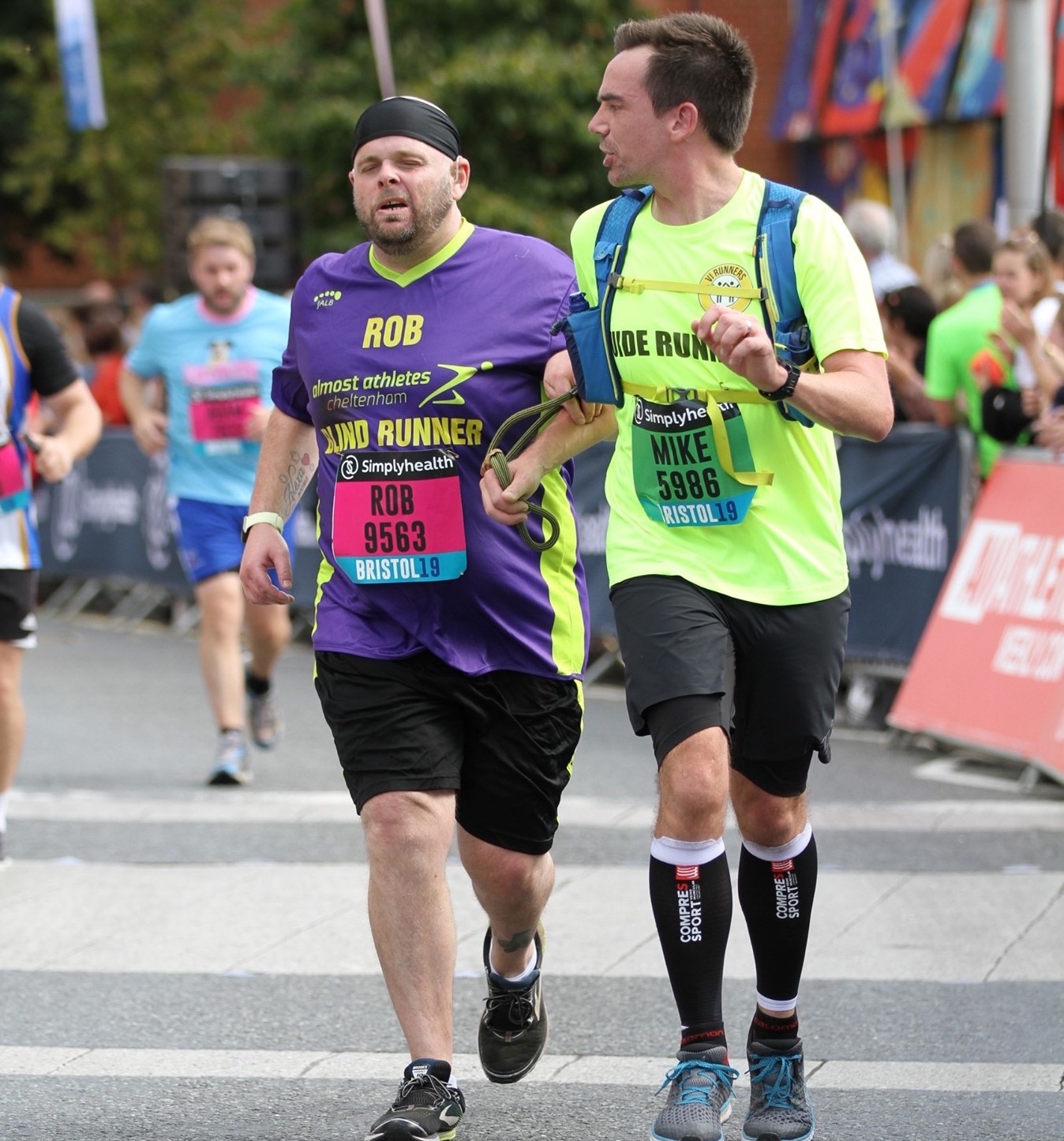 Rob has also now gone on to compete in and finish 10k races as well as half marathons.

He is not stopping and hopes this is only the start of a fantastic journey of many more years to come.