Nothing to be embarrassed about

Curtis Ledger wants everyone to know that weight is not a barrier to participating at parkrun. After tail walking with his daughter at Bodington junior parkrun, a chance set of circumstances started him on his journey to taking part in 5k events.

Having just completed his 50th parkrun at Woodhouse Moor in Leeds, he tells us his story.

I first heard of parkrun via my Vitality work health insurance scheme. Their membership encouraged people to become more active, and it had a programme where one of the ways you could earn points was by volunteering or running at parkrun events, which led me to search out the website.

I started a couch to 5k programme, struggled to get beyond week four, due to the rate at which the demands increased, and gave it up as something I’d never be able to achieve.

Some years later, one of the parents in my daughter’s class posted on social media about a new junior parkrun starting nearby.  My eldest daughter Alice (then eight years old) had done a few bike rides with me, so I thought it might be something she’d enjoy.

I took her to the first one and was surprised to see a lot of the parents taking part alongside their children.

I went back with Alice for the second event and took my youngest daughter, Grace (then five years old) with a plan to go round the course with her, secretly hoping that I’d be able to keep up with her and complete it.

As it turned out, Grace was by far the slowest child there that day, and we walked/jogged around the course alongside the Tail Walker, Liane, who was fantastically supportive. As Grace crossed the line she got a huge cheer from all the volunteers, which she loved, and immediately agreed that she’d like to come back to the next one.

I volunteered to be the Tail Walker at the next event, given that I would most likely be accompanying Grace at the back. In order to be added to the volunteer roster, I had to register with parkrun and get my own barcode number. 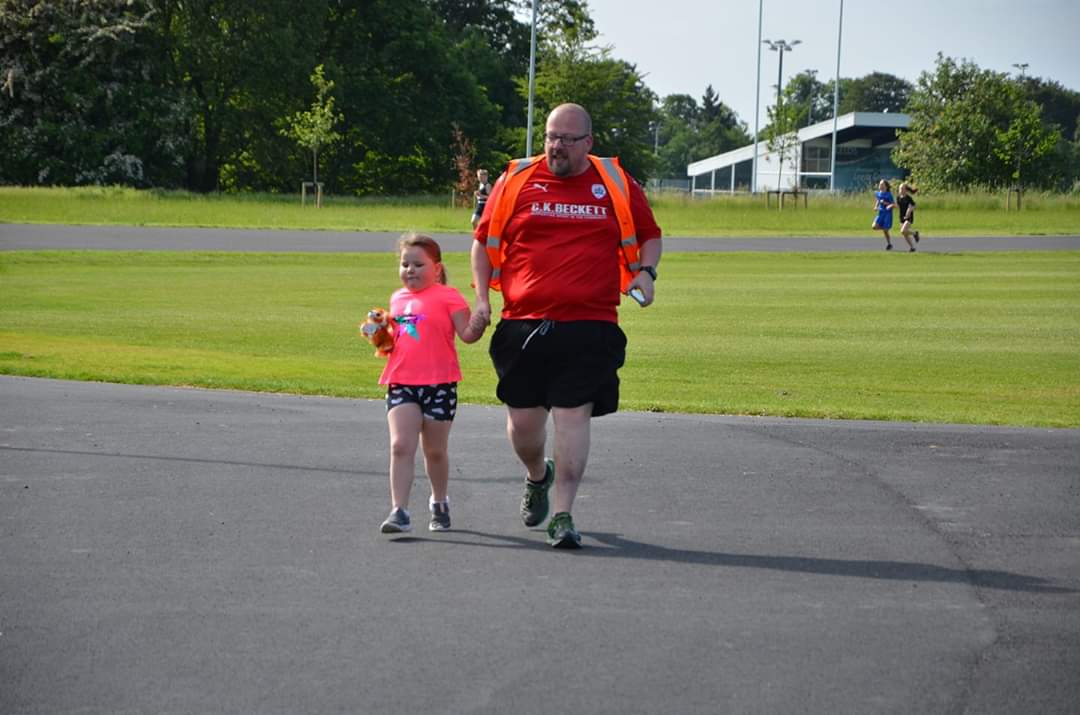 Over the next few weeks, I became the regular Tail Walker for the early Bodington junior parkrun events.  Alongside this I did a Google search for “couch to 5k for obese people” and discovered an online programme called None To Run, which had a gentler progression than the other couch to 5k programmes.

I was now spending each Sunday surrounded by a volunteer group who were regular parkrunners, and eventually, they encouraged me go to one of the main parkruns.  My first parkrun was at Woodhouse Moor in June 2018, on the weekend celebrating 70 years of the NHS.

My friend, Jaz, had organised a small group of people who would walk round the course that day and had decided that I should be one of them! I agreed to this, but said that I actually wanted to try doing it using the walk/run intervals I’d been training with.

I turned up really early that morning and was incredibly nervous, not knowing whether or not I’d complete the course. A couple of friends from the volunteer group turned up and told me that they were going to accompany me around the course, which helped ease my nervousness, but I genuinely expected the whole thing to be an embarrassing failure.

In the end, I completed the course with a time of 54:10 and got a huge amount of support and encouragement from everyone, both there and at the post-run cafe afterwards.  As I politely assured everyone that I’d enjoyed it and was planning to come back I realised that I was actually telling them the truth. I already knew I’d be back the following week. 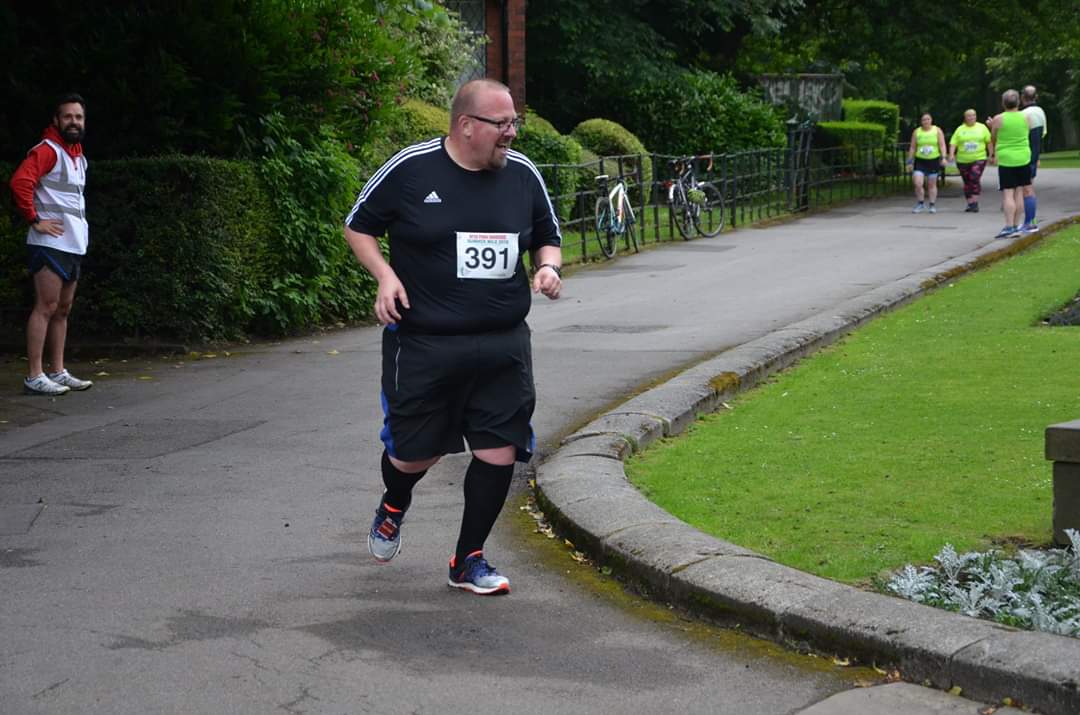 My journey was through a specific set of circumstances, where a simple plan to take my daughter to a junior parkrun naturally snowballed from there.  Looking back, I wonder if I’d have reached this point if the particular chain of events hadn’t quite fallen in that exact way. If Grace hadn’t been the slowest child, or if I’d not emailed the volunteer team that day, I doubt that I would have been tailwalking at the following event, so it might all have been very different.

Consequently, my advice is to NOT to rely on fate in this way, and just get out there and give it a go!

For many people, this is a relatively easy step to take, but I’m conscious of those out there, like me, who currently see parkrun as something for serious runners only, and who don’t see themselves as candidates to give it a go.

There are still many people out there who have those same fears as I did – of being too slow, too unfit, of embarrassing themselves or looking stupid alongside a load of lycra-clad athletes.

It’s easy to say with hindsight, but the real power of parkrun is the fact that you become part of a local community, and it’s an immensely supportive environment. Within a couple of weeks of starting parkrun, I had a huge number of faster runners shouting words of encouragement as they passed me, many of them calling me by name.

Small things, such as people pointing out that I was further around the course than the previous week as they went past, made such a difference, and this support was coming from every type of runner on the course, from those at the front and those who I subsequently discovered were using me as their target to keep up with as their short-term goal.

I’m so proud to have seen both my daughters hit various parkrun milestones.  Both now have completed over 50 junior parkruns, and both have earned their 10 milestone shirts at the main parkruns. I was Run Director at Bodington juniors on the day that Grace earned her marathon milestone for 21 junior parkruns, so I got to present her with her wristband on that day. 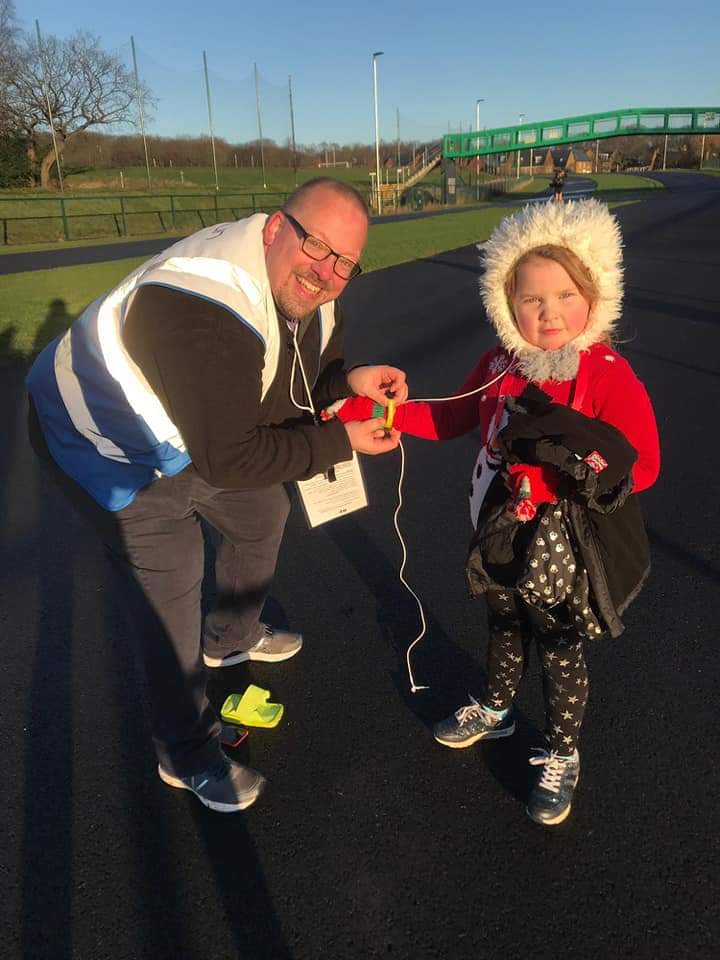 My wife, Sophie, is also now a member of the Bodington juniors core volunteer team, and she’s done several parkruns alongside our daughters, so parkrun is now well embedded into the whole family.

It’s an honour to think I might be having an influence in getting other people to give parkrun a go, as a result of me talking about my experience.

I’ve gained the confidence to do things I never thought possible prior to parkrun.

I’d like to use my story to encourage more obese people to participate in parkrun, and to demonstrate that weight is not a barrier. Go along to a local parkrun to spectate and see what it’s all about without participating, as seeing the diversity of runners that take part each week will assuage a lot of those doubts.

Taking that initial step, whatever it is, is the hardest part to overcome but very few people will ever regret doing so. 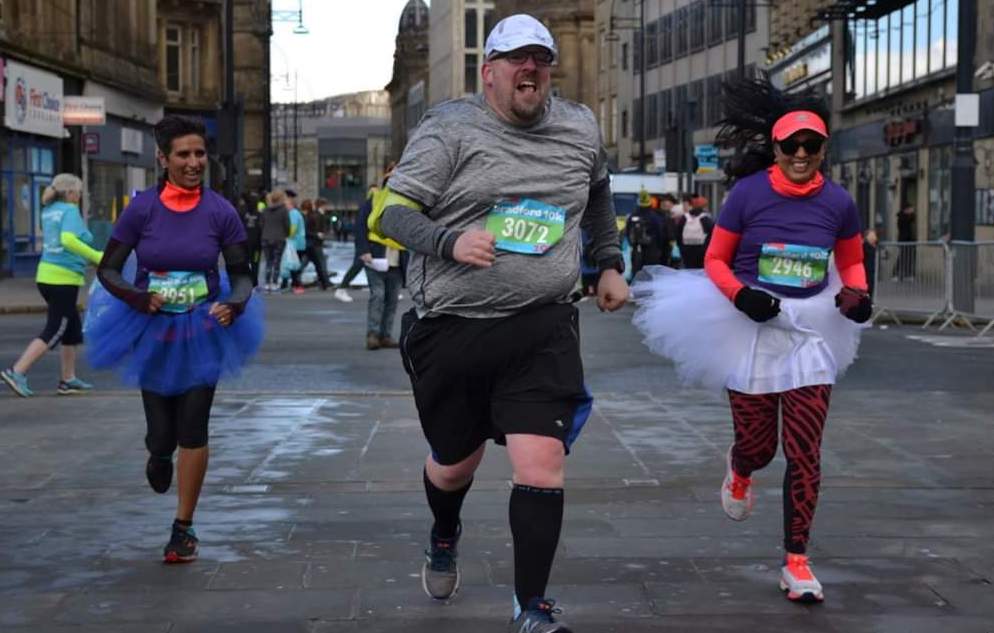 You can watch Curtis discussing parkrun on our YouTube channel here.

Melanie Norman and her husband Andy have been helping their parkrun community stay engaged and in touch with each other over lockdown.   Melanie tells us what they’ve been up to.   My husband, Andy and I are avid parkrunners. Our home parkrun event is Worcester. I have completed 193 parkruns and Andy 248. I did…

Roger Boys challenged himself to run one mile per year of his life over July. That’s 74 miles!   Up until 2002 I had not run a mile for the best part of 40 years having given up playing football. We were on holiday in the Isle of Wight and my wife Nicky had gone into…