As we plan the reopening of parkrun events it is critical that we understand the intent to return of walkers, runners, and volunteers. This insight helps us anticipate the number of participants, gauge the level of enthusiasm for taking part, and ensure that there are sufficient volunteers for our events to be delivered.

Since events were paused, we’ve carried out insight work to assist us in our planning and decision making. For example by making over a thousand telephone calls to event teams and volunteer ambassadors, or by surveying samples of parkrunners from around the world.

Our ‘intent to return’ survey has been crucial in this regard and, for the last nine Fridays, we’ve been asking* UK parkrunners the following two questions:

If official government guidance changed to enable parkrun to return in four weeks time how likely would you be to turn up and walk or run?

At the same time, the percentage of respondents saying that they would be unlikely or very unlikely to return has dropped from 14% in early July, to 8% in late August. 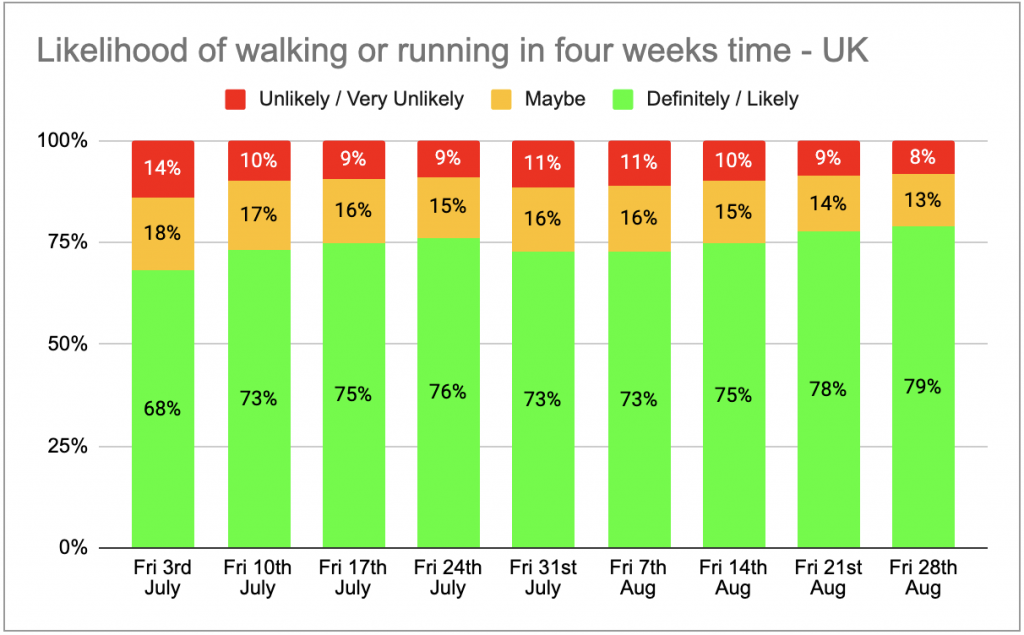 * Recipient criteria is ‘has walked, run, or volunteered, at a parkrun event at least once in the last 12 months. Average number of weekly responses = 1,188.

The second question we asked was:

If official government guidance changed to enable parkrun to return in four weeks time how likely would you be to volunteer?

On an average Saturday, parkrun UK requires about 15,000 volunteers for events to take place, alongside the 175,000 walkers and runners. This ratio of around 11 walkers and runners to every volunteer means that, by definition, people are much more likely to walk or run than to volunteer. And we see this reflected in the survey results, although, encouragingly, at a much closer ratio. 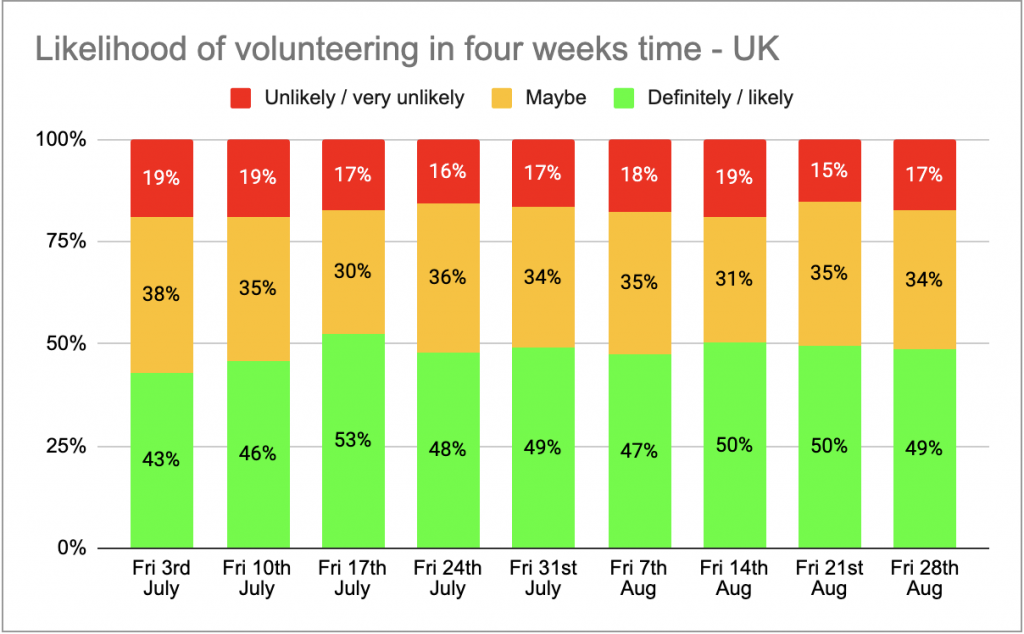 Also positively, amongst those who had not volunteered, 9% said they would definitely or likely volunteer. This equates to 90,000 people out of the 1,000,000 who have walked or run in the last 12 months but not volunteered.

Overall these findings give us confidence as to UK parkrunners’ intent to return in the near future as walkers, runners, or volunteers. And it is encouraging to see that, not only are people keen to return, but that this positivity is increasing over time.

We also know from speaking to event teams that one of their biggest concerns is recruiting enough volunteers for their events each week. Thankfully, our insight suggests that events won’t be overwhelmed with walkers or runners but will be able to engage enough volunteers.

However, our insight work around this specific area will continue over the coming weeks and inform the level and type of direct support we provide to event teams going forward.