Roger Boys challenged himself to run one mile per year of his life over July. That’s 74 miles!

Up until 2002 I had not run a mile for the best part of 40 years having given up playing football. We were on holiday in the Isle of Wight and my wife Nicky had gone into a supermarket and had inadvertently left her purse on the car seat. I decided to run the 70 yards to give it to her and set off. By the time I got to her I couldn’t speak for being so short of breath! This was the trigger to start running.

My plan was to be able to run a mile and swim a mile on the same day. Not difficult I hear you say, but at the age of 66 years it was quite a challenge.

It was while having a bit of treatment by a physiotherapist, having damaged my Achilles tendon, I first heard of parkrun and decided this was a goal for me to achieve.

I remember my very first Newbury parkrun. I was feeling very nervous as I did not know anyone there and I had never run with so many people. I did not know what to expect. However, once I had started all was well, I plodded along at the back and spoke to a number of other runners and enjoyed the atmosphere.

That was back in 2014. I’m well on my way to 150 parkruns now with a good number of volunteering days under my belt too. I have made lots of friends through parkrun and enjoy their company whether that is parkrunning or volunteering. 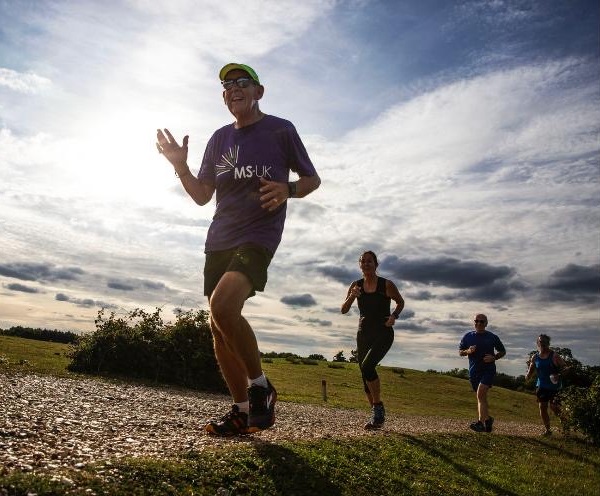 Just like so many others, I have missed parkrun a lot over these past months. I noticed that a number of charities were suffering badly as events used by them, to raise funds to support others, were closed down. So I decided to do my bit to help out. I set myself the challenge of running one mile for each year of my age during the month of July, that was 74 miles! I wanted to raise money to support a multiple sclerosis charity

I ran three times per week averaging around six miles each run. As the sponsorship money began to rise the pressure to succeed became greater and I did experience some concerns that I might get injured and therefore would let people who supported me down. Fortunately this did not happen.

In fact, the running was becoming fun, as I explored the tow path on the Kennet and Avon canal searching for the wildlife and butterflies that became my companions. Other days I explored new parts of Greenham Common looking for relics of the period when it was used by the US Air Force during the cold war, also the Craven Estate, a beautiful place to run with the sheep and lambs and very occasionally deer. Some days it was very hot and humid others windy and rain, neither affect the determination of the long distance runner!

For my last 2 miles I was joined by friends and supporters who offered to accompany me for the final run in. Some were standing on the route waving banners and cheering me on observing the protocol of social distancing of course! There was an amazing atmosphere and it was great fun as we tackled the parkrun course which is 3 miles giving me an extra mile making the grand total 75 miles completed during July! So that’s one mile in the bank for my 75th birthday! Challenge completed, phew!

Since finishing my challenge I have continued to run 3 times per week, clocking up around 15 miles per week.

Thank you parkrun for giving me the confidence to take on my challenge.

As we move through the reopening process for parkrun and junior parkrun, we’re publishing a UK-specific update every Friday to keep ambassadors, event teams, parkrun communities, and landowners informed on our progress.    ***   England   Saturday’s reopening in England went incredibly well, with around 500 events restarting, taking the total of  walkers, joggers…

10 things we loved about the return of parkrun in England

Not even the unsettled weather could dampen the mood as more than 500 5k parkrun events returned across England on Saturday.   We take a look at 10 things we loved from the weekend.   Almost 100,000 walkers, joggers and runners took part in a 5k parkrun across the UK on Saturday, supported by more…