Tony Collier’s diagnosis with prostate cancer did not signal the end of his enjoyment of running instead it was the start of his love affair with parkrun.

I admit it, I never truly got parkrun and it took a life changing event for me to really understand the ethos.

As it happens parkrun was starting to really take off just as I started marathon training.

What was my issue with parkrun then?

Well I couldn’t possibly do a 5k “race” on a Saturday morning and then do a 20 mile training run on a Sunday and that was my epic failure, not recognising that parkrun wasn’t necessarily about racing, it’s so much more. Saturday mornings for me used to be a short recovery run of 4 or 5 miles and I could easily have done that at parkrun but no, if I was doing 5k I was going to race it!

My early experiences of parkrun were when I was leading a Couch to 5k group that would graduate at Bramhall parkrun and I ran alongside that year’s cohort to encourage them. I didn’t even register a time because I didn’t want a slow time on my record. Totally wrong and so different to the true ethos of parkrun.

Then disaster hit when I found out in May 2017 that my runners “groin strain” was actually terminal prostate cancer and I might only have 2 years to live. The “groin strain” being stress fractures of the pelvis where the cancer had eaten into my pelvic bone.

Did this signal the end of my running life? No, but it did signal the start of a love affair with parkrun.

I was told that I would be able to resume running but I’d be a lot slower and should avoid running long distances. The treatment would remove testosterone and this would have a massive impact on athletic performance.

After letting the pelvis heal I resumed running in July 2017. 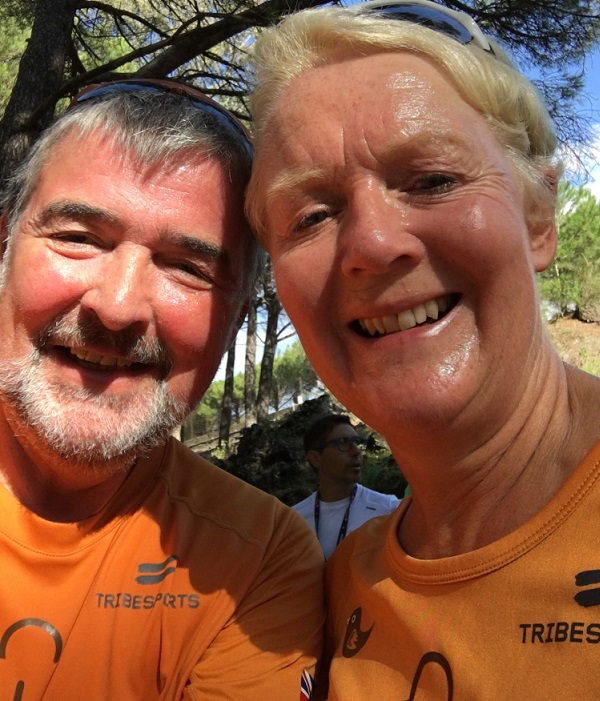 As expected the treatment started to really impact on my 5k times, but it helped me realise that ‘times’ is not what parkrun is all about. parkrun is totally inclusive, non-judgemental and, most importantly, it’s not a race, unless of course you want it to be.

For me racing lost a lot of its importance. I was just desperate to be able to continue to run.

I started to take part in Wilmslow parkrun most weeks and got to make loads of new friends and realised that parkrun is much more than just running. It’s a real community of friends and the best bits have often been having a pre or post run chat and a coffee.

The community at Wilmslow have been so incredibly supportive of me on my cancer journey to date, encouraging me and, although they wouldn’t have known it, helping me through some real dark days where my mental health was in tatters through dealing with my diagnosis. I had so many kind and positive words from fellow parkrunners and the amazing volunteers that would keep me going on days when the cancer related fatigue was making running a real struggle. This for me is the essence of parkrun, everyone encouraging everyone else from those at the pointy end to those right at the back. What better sight is there at parkrun than seeing the final runner finish to the biggest round of applause of the day?

I’ve now completed 21 different parkruns in 5 different parkrun countries, England, Wales, South Africa, Italy and Australia and had it not been for Covid 19 I’d have added Germany and Holland in 2020. 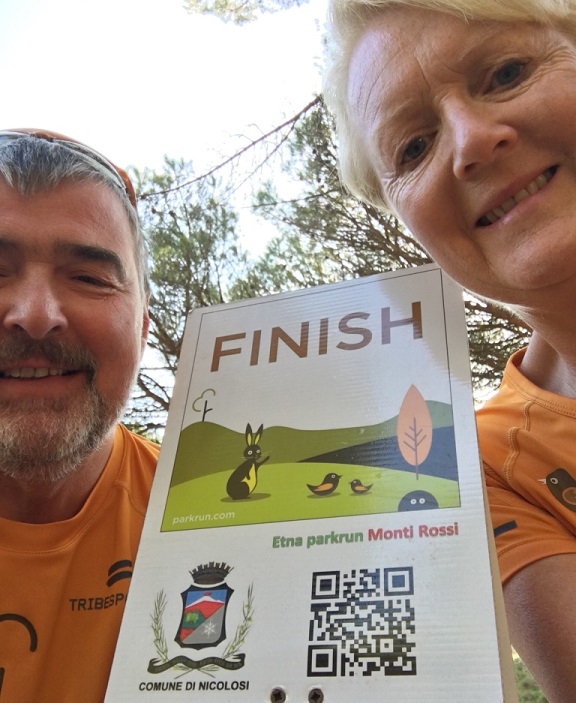 I also love volunteering and have volunteered now on 44 occasions. There’s nothing better than marshalling by the first bridge at Wilmslow parkrun and encouraging runners going in all directions. I think, for me, this is the best part of parkrun. After all, running hurts and volunteering doesn’t.

Then parkrun really went up a notch for me in its importance when, in October 2018, I heard about the amazing organisation that is 5k Your Way.

I’d continued to run since my diagnosis because it had a massive positive impact on my physical and mental health and I remain convinced that staying fit will extend my prognosis. It also enabled me to take control of my illness and do my best to combat it. Then here was an organisation, 5k Your Way, doing exactly that. Encouraging people living with and beyond cancer to continue or get back into exercise by walking, jogging, running, volunteering or simply being part of the parkrun community on the last Saturday of the month and then heading off for a coffee where we could all support each other.

I took the step of contacting 5K Your Way to understand what would be needed to set up a group at Wilmslow and had an exchange of communications with the amazing Lucy Gossage, co-founder and international Ironman triathlon champion and we decided we could make this work. The next step was to approach the parkrun core team. Would they support this? I can only say that I’ve since had nothing but amazing support and encouragement from the core team and all the volunteers. They truly get and understand the value that 5K Your Way brings and have been right behind me ever since.

I was also blessed to know Sara Harris another Wilmslow parkrunner who is a community paramedic for the North West ambulance service and we chatted about 5k Your Way and I was delighted that she was positive about being my co-ambassador at Wilmslow. She has been an absolute delight to have on board and has brought so much energy and enthusiasm to the role as well as cake!

I worked really hard leading up to the launch, having lots of conversations with cancer health care professionals across Greater Manchester. What was amazing was that they really understood what we were trying to achieve and have been amazingly supportive as well as regular attendees at 5K Your Way. There are far too many to mention them all but it would be remiss not to mention Matthew Evison a lung cancer specialist whose son Jacob became an absolute star at Wilmslow 5K Your Way. We’ll never forget the videos that Matthew took of him and Jacob taking part in 5k Your Way, especially the outtakes version.

Then there is Claire O’Rourke, Associate Director at GM Cancer and herself an ultra-marathon runner. She has been an amazing supporter as has her husband John, himself now dealing with a double cancer diagnosis. Both have been regular attendees and really enjoy chatting with our 5K Your Way community over coffee. 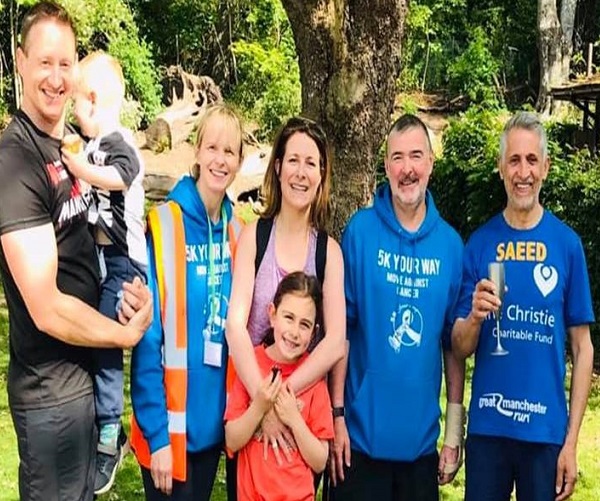 We launched at the end of February 2019 and have had regular attendances of 15-20 and as high as 40. We’ve helped lots of people and have received some amazing feedback. We had our 1st year anniversary just before the pandemic put a stop to our parkrunning for a while. 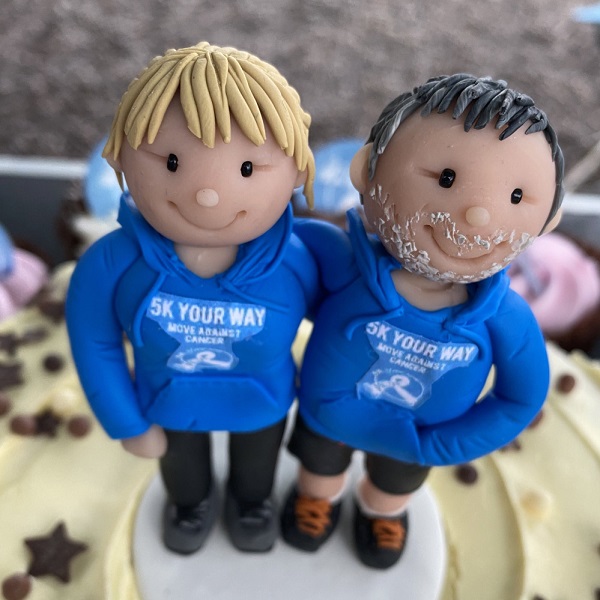 It’s fair to say that I’m a complete convert to parkrun and incredibly grateful for it embracing 5K Your Way.