Nicola Churchill couldn’t run to the front door. Along with two friends, she decided International Women’s Day would be the ideal time to give parkrun a try out.

I had always thought parkrun sounded like a great thing to be part of, but as I couldn’t run to the front door, I never ever thought it would be something I would get involved in.

I generally keep fit going to gym classes several times a week, swimming and school runs. If I used the treadmill at the gym it was for a brisk walk.

One of my friends had taken up the Couch to 5k challenge and had got to the week when she ran for 20 minutes. She was so proud of herself, she was doing so well I wanted to support her. She had never run before but was really inspired by the challenge.

I saw a post on social media about the International Women’s Day parkrun the same week and thought it would be a great thing to get involved with together and support her running further.  I asked her and another friend if they fancied it. Girls together!  So we registered and turned up on the damp, chilly Saturday morning ready to go.

It was easy to register for parkrun and we found the event was really well organised.  We were instantly at ease and could see that there were people of all abilities.  The Marshals were great and cheered us on at every point.

As a group of three we were all different fitness levels and we were pretty much the last to finish but at no point did we feel under pressure to hurry up or get a move on. 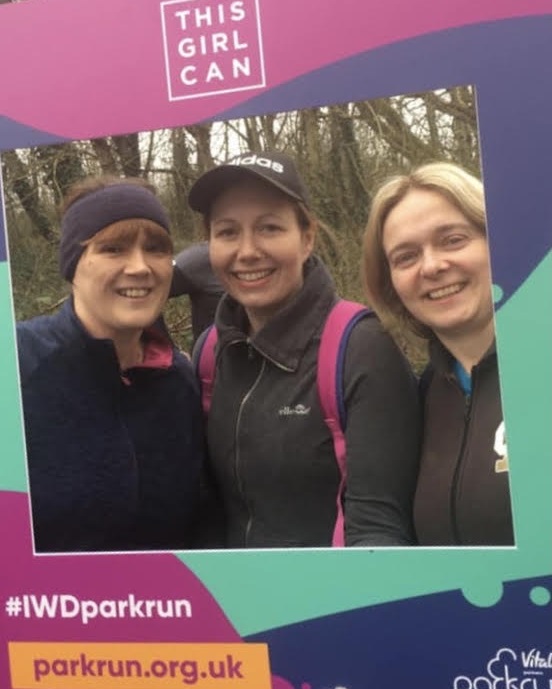 The atmosphere was fun, relaxed and very friendly.  I thought to myself then, that I would probably try it again.  I would definitely recommend it to anyone who wants to get active or for those who run regularly.

I was totally inspired by that first parkrun and my friend doing the Couch to 5k so on the following Monday I started the Couch to 5k myself.  It was hard but I was pleased I’d decided to give it a go.

Then the pandemic hit! However, as we were still allowed to leave the house once a day for exercise I decided to carry on. I loved it, even my neighbours would clap and cheer as I came back down our street out of breath. In fact one of them started the challenge too.  I completed my challenge in May.  I was really proud of myself and found that, as hard as it was, I really loved running.  I signed up for another challenge in July and ran 50 miles in the month.  I have continued to run 5k 2-3 times a week.  I even got my husband interested.  He started the Couch to 5k three weeks after me and now runs 5-10k three times a week. He is well and truly hooked.  I’m hoping that we can parkrun together once were back to some sort of normality.