After being diagnosed with prostate cancer aged 40, Tim Beynon found running, and parkrun, to be the tonic he needed to get through the psychological and physical challenges of cancer.

Today, thankfully in remission, he is on a mission to make more men take their health seriously. Here he explains why a regular dose of parkrun and a trip to the GP should be a must for all those with a prostate.

“Barcodes! Who’s got the barcodes?” This is the soundtrack to our Sunday mornings as my wife and I routinely shepherd our children out of the door, all of us vaguely dressed and with toast in hand, for the ever-brilliant Queen’s Parade junior parkrun in Aldershot.

Together with a small horde of other similarly dishevelled parents, we park up at 8.58am and find ourselves, once again, sprinting to the start line for the last 20-seconds of the warm-up, before the children disappear into the distance at the sound of the starting claxon.

However chaotic it may be, this weekly pilgrimage to the corner of a vast playing field for two-laps of all-weather joy is something that I relish and, thanks to a brush with prostate cancer three years ago, is now something that I certainly don’t take for granted.

At 40-years-old and as a parent of two young children, the prospect of being struck down by a disease that I had assumed was only of concern to those of more senior years, was not something that I had ever contemplated.

But strike me it did and in December 2017 I found myself in a consultant’s room on the receiving end of a diagnosis that confirmed I had stage 2 prostate cancer. Shocking? Yes. Unexpected? No. I had undergone months of tests beforehand, all of which had pointed towards the news being bad, so when it was finally confirmed, my wife and I were fully expecting it. I was a 40-year-old dad of two who had defied odds of 10,000:1, to contract the disease.

It was almost too much to believe, but after I’d worked my way through the anger and the disbelief, I actually came to realise, quite quickly, how lucky I was.

I had learned a huge amount about prostate cancer during the months of testing. I had discovered, for instance, that it is treatable if caught early, but that sadly far too many men are unaware of its presence until it is too late.

I had no symptoms whatsoever and my cancer was only picked up because I was amongst the minority of 40-year-old men who bother to attend the free NHS health check to which they are entitled. My check detected a raised PSA (prostate specific antigen) level in a blood test and kicked off the testing journey that culminated in diagnosis, surgery and a lengthy recovery period.

Had I not attended that health check, I would not have received another invite until I was 45 years old, by which time my cancer would have been incurable. So, it is no exaggeration to say that I owe the NHS my life.

It is also no exaggeration to say that finding yourself on the receiving end of life-changing news, plays havoc with your mental wellbeing, especially as you weigh up the balance of luck. On the one hand you are one of the unluckiest 40-year-olds in the UK to contract prostate cancer, but on the other you are one of the luckiest to have had your cancer caught early. This bizarre cocktail of self-pity, mixed with a shot of gratitude, unsurprisingly leaves you with a 24/7 mental hangover.

Throughout the whole experience, however, I continued to run. 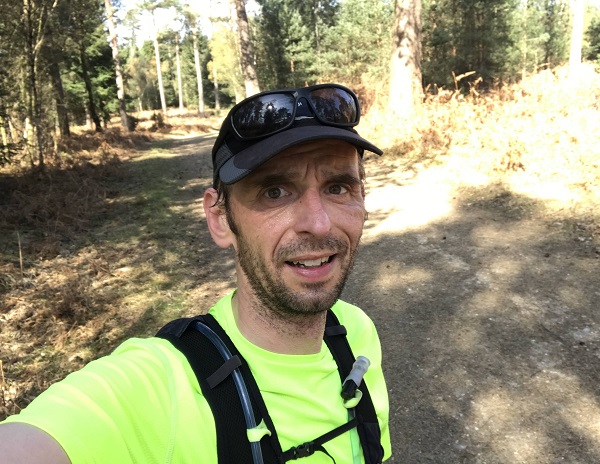 The trails and pavements around my hometown became the crutch I leant on to help me gain physical strength and also to deal with the low moods, anxiety and fear that gripped me if I allowed myself to dwell on the ‘what if’ questions that inevitably come with cancer.

Ensuring I was as fit as I could possibly be for surgery also thankfully meant that my recovery was quicker than anticipated and, in the weeks that followed my date with the surgeons, I subsequently felt almost duty bound to apply for a place running for a prostate cancer charity team for the 2019 London Marathon. The charity had helped me greatly and I was delighted, upon securing a spot, to have an opportunity, albeit a challenging one, to give them something back.

What followed was a period of time that I will forever look back on fondly. I ran to get stronger, I ran to keep the psychological cancer demons at bay and I ran with the goal of completing the most famous 26.2 miles in the world. And along the way, I had parkrun, and junior parkrun, to remind me of the sheer joy that comes from a sport that embraces diversity.

The Rushmoor parkrun on a Saturday morning encompasses two, mostly-flat circuits around a large playing field and along a picturesque stretch of the Basingstoke Canal.

Like all parkruns, Rushmoor blends seasoned parkrunners with newbies, parents with buggies and those who are just pleased to be there. Being a part of that shared experience is wholly positive, but as part of my recovery it added something else. Like receiving a weekly injection of happiness, the familiar faces, start line small talk, ever-cheery volunteers, coupled with the challenge of pushing myself closer to my PB, meant that parkrun felt like my home, and the perfect base from which I could kick on with my marathon training.

Thankfully, my recovery and training went well and, at the end of April 2019, I crossed the famous finish line on The Mall with a time of 4 hours, 20 minutes and 1 second. I had achieved a lifelong dream, raised over £2,500 for the prostate cancer charity and was finally able to draw a line under a chapter of my life that had tested my physical and mental strength, like never before. 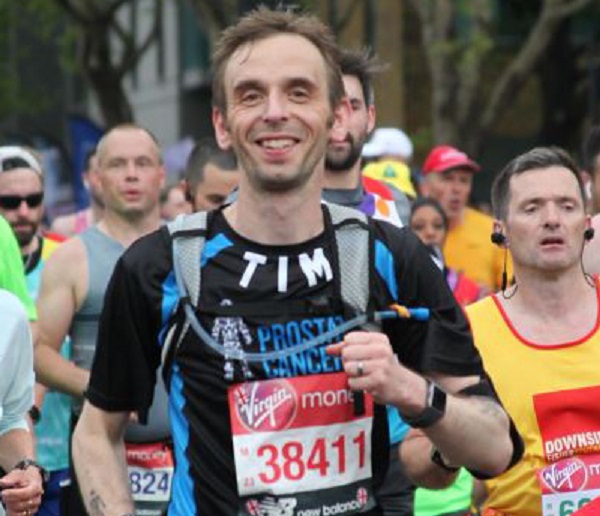 Today, I continue to run around the streets and trails of my hometown, forever grateful for the head-cleansing effect that running has on my mental wellbeing. Indeed, no matter what is going on in my life, I know with certainty that each time I lace up my trainers and head out the door, I will return home sweaty and dishevelled, but revitalised and re-energised, with the worries that had previously dogged my day now compartmentalised and packed away. 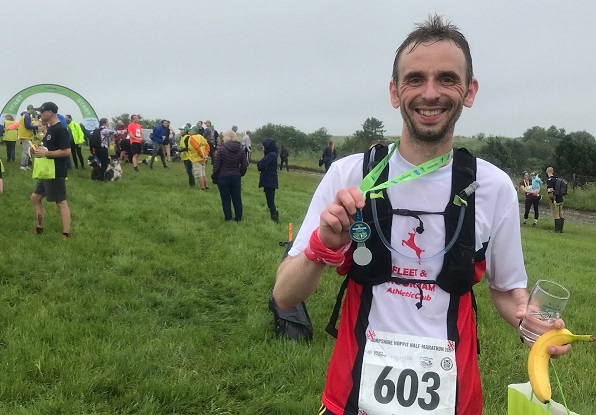 While running continues to be central to my life, so too is championing men’s health and raising awareness of prostate cancer amongst men in their 40s and 50s. One in 8 men will be diagnosed with the disease in their lifetime, but I am convinced this devastating number can be reduced if more middle-aged men knew their PSA levels.

Incredibly, there is no national screening programme for prostate cancer in the UK. So, to all parkrunning men entering their fourth decade, I’d urge you all to take 10 minutes out of your day to surrender a test tube of blood, especially if you have a family history of prostate cancer or are black, both factors that put you at higher risk.

However, I am white and have no family history, so whether you are in a high risk category or not, knowing what your baseline PSA level is will allow you to keep track of it in the years ahead. Afterall, prostate cancer is treatable and curable when caught early, so why not attend that health check you’ve been putting off, or cough up for a private test if you have to? Knowledge, as they say, is power.

As for running and parkrun, I am aware that I am preaching to the converted here, but to any of you facing a challenge to your mental health; I know how hard it can be to find the energy and the will to get out of the front door, but no matter how much your head is telling you to shut yourself away, force yourself out. You won’t regret it.

Keep running, get tested and, if you ever find yourself in Aldershot on a Saturday morning, I’ll see you on the parkrun startline.