In June 2018, a partnership between parkrun UK and the Royal College of General Practitioners saw the launch of the parkrun practice initiative.

Four years on, more than 1,600 GP practices have now signed up as parkrun practices resulting in thousands of staff, patients and carers being introduced to the joy of parkrun.

The initiative initially set out to raise awareness of parkrun amongst GPs and practice staff, encourage them to take part in parkrun and signpost their patients/carers to parkrun events.

Some practices have gone one step further and set up parkrun events in their own communities. When Sheffield Doctor Ollie Hart set up the first GP-inspired parkrun in the UK, he asked the receptionist Jo Eccles to take the lead.

Little did she know it would transform her life!

Jo explains – “I’ve previously suffered with anxiety and depression, I was in a serious relationship which took a bit of a turn for the worse and it ended up being an abusive relationship. He pushed me over the edge and it stripped me of my confidence and self belief.”

Ollie Hart said, “I wouldn’t say Jo wouldn’t talk to people but she was definitely a shy person, and I think the thought of speaking to people in public probably would have horrified her. When we thought about setting up a parkrun we talked amongst the staff and there were a few people who were keen, and Jo was one of our receptionists at the time. She was really keen on the idea but she told me she was a bit nervous about being up front.”

Jo said, “When Ollie asked me to help him start Graves parkrun I thought maybe it was going to be a couple of Saturdays a month.”

“Increasingly over time she built confidence and she became much more of a leader of the event,” explains Ollie. “What I’ve noticed with Jo is that her self assurance and self confidence has just naturally grown, she’s got this air of composure now and her reputation goes before her now, she’s parkrun Jo, that’s how people refer to her!”

Jo said: “I thought I was falling apart before I started parkrun and I think parkrun helped me to pull myself back together.”

Dr Abbie Brooks, a GP in York recently organised a takeover at Heslington parkrun, bringing together GPs from all over the city. 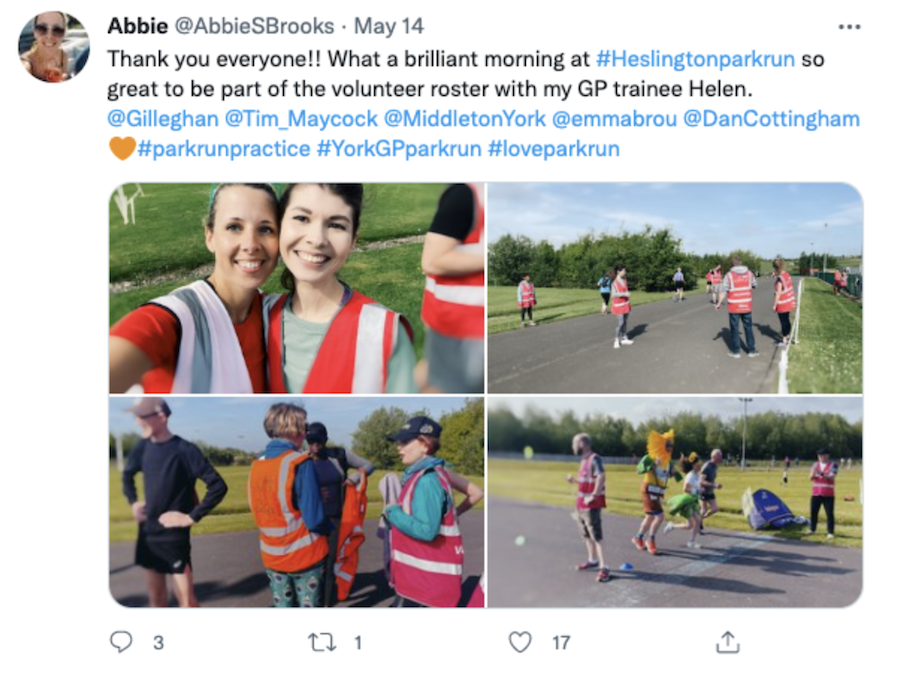 On the day Abbie said: “I’m really pleased with the turnout, there are lots of GPs from trainees to veterans and there are lots of newbies here today who have never run or volunteered before. These events are perfect for getting those people to see the benefits of parkrun and they pay it forward by speaking to their patients about it!”

“What I would say to all GPs is give parkrun a go yourself. Just go to your local parkrun, you don’t even have to run, you can walk, volunteer or just watch. Stand there between 9 and 10 on a Saturday morning and just see what goes on.

Then you can start to say why it’s helpful. We have lots of different ways of advertising parkrun; on our notice boards, on our TV screens, on our website and social media but the strongest message is the one from me personally to a patient who is sat in front of me or on the telephone telling them why parkrun is so brilliant.”

In the wake of the global COVID-19 pandemic, the parkrun practice initiative has an even more important role to play in helping promote the health and happiness of people and communities in the months and years ahead.

You can find out more and sign your practice up as a parkrun practice here.

If you are part of a GP practice, and would love to establish a parkrun in your area, why not make 2022 the year to do it?

If you want to know more please contact us at support@parkrun.com and we would be happy to help.