From the operating theatre to parkrun

Back in January this year, Mike Boice was at the Royal Sussex County Hospital to have an aortic valve replaced in his heart.

Six months after the operation, known as TAVI, he is back parkrunning at his local – Hove Promenade parkrun.

His recovery from the operation has been such a success he has now been invited to go to Paris and speak at a European cardiology conference.

Mike, 80, a retired educationalist, said: “I was born with a bi-cuspid aortic valve – basically mine had two flaps instead of three. I didn’t even know until about 20 years ago when I started having palpitations. I went to see a GP and a specialist diagnosed me. For years it was manageable with an annual check-up but by December 2020 I was advised that the condition had worsened and I needed to have an operation.” 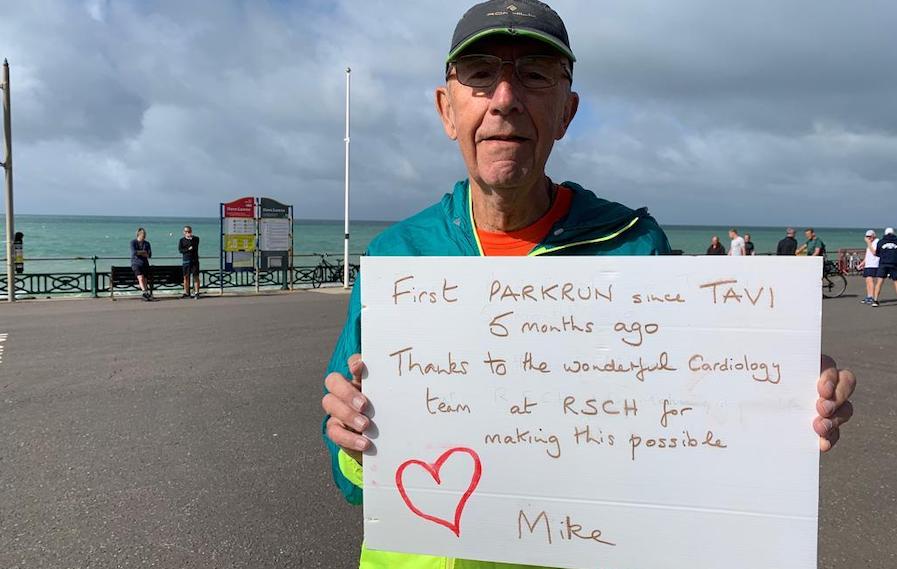 Mike added: “I was pretty asymptomatic but my heart was working harder than is should have been. I have always been a keen runner but I was basically warned off it and I stopped completely last year. That was a big wrench.

But once I’d had the op, which went really well so they tell me, I was told I could start again in time.

I celebrated my 80th birthday having a run beside Lake Garda with my son Mathew and I then did my first post-op parkrun in June in Hove.

I did another one last weekend and hopefully, once I get the total all-clear from the docs and my confidence increases with my new valve, I can get back up to speed and go for a 10k!”

He said: “Mike is very fit for his age and he had not been hugely troubled by his condition but it was getting worse and he needed to have the operation.

We are one of about 20 hospitals in the UK who do the TAVI’s. In Mike’s case his recovery from the operation has been really successful and it is great to see him back doing what he loves.”