The reason I am still here

At parkrun, Finn has found a place where they feel like they belong – exactly as who they are.

Here, Finn talks us through their journey and explains why the friends made at parkrun make them feel more comfortable than anywhere else they’ve ever been.

I got into parkrun in 2017 when I found out that there was a new parkrun starting near where I lived in Ruchill. I had heard of parkrun through my aunt who took part every week at Pollok, but this was a little far to get to on foot so I had never done a parkrun until April 2017. I loved the atmosphere. Everybody was so friendly and welcoming, I couldn’t wait for the next one. I had definitely caught the parkrun bug!

I went along every week that I could and got to know the core team by volunteering after my parkruns too. I then asked if it was possible for me to join the core team as a run director (RD), and the team were delighted to welcome me in. As I was under 18 I had to do my first block of shifts shadowed by one of the more experienced RDs, but I grew in confidence and after that first stint in May 2018, I have been a run director many times across several events. 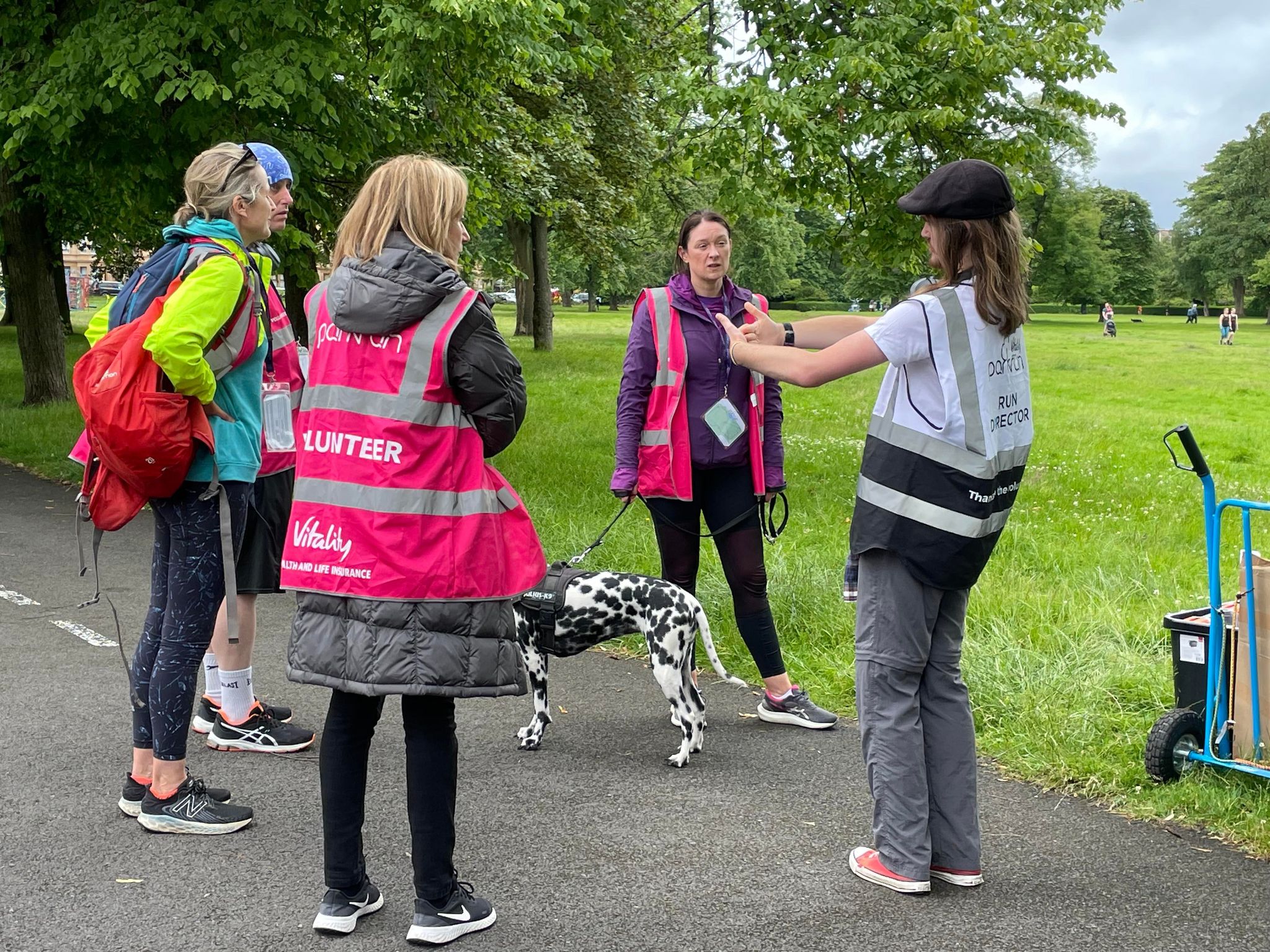 Since the beginning of my parkrun journey, and at the time of writing, I have completed the 5k 102 times (72 of them at my home parkrun of Ruchill) and volunteered on 167 occasions (40 of which as a run director).

In late 2018, I had a major setback in my mental health. After coming out as pansexual to my friendship group at school, I didn’t receive the support that I expected but more a sense of questioning me and judgement. This made me feel a large mix of emotions; anger, sadness, distrust, loneliness. This is the day that my life changed, the first time that I remember having very clear problems with my mental health.

I went through the final six months of my school life feeling like an outsider, with an overwhelming amount of trust issues surrounding everyone around me. I didn’t really talk to that many people and I felt really lost and alone. With my trust broken by those who were supposedly the closest to me, I didn’t really feel at home anywhere. The one thing that kept me grounded and in some sort of positive mindset was my running.

Going along to parkrun on a Saturday, running or volunteering, gave me a sense of belonging and community that I didn’t really have anywhere else at that stage in my life. It was somewhere that I felt comfortable, without mentioning anything about my sexuality or who I truly was. I was almost hiding my true self out of fear, but also because it wasn’t necessary and I just enjoyed the fact that I could go for a run and chat to my friends without feeling like I was being judged by the people I was with, the way I was at school.

Running also helped to offer a distraction from what was becoming a much more challenging time at school as I continued to receive backlash on a few occasions and as a result became distracted from my schoolwork and remaining focused on whatever task was at hand.

I began to live what I now see as a double life; I had my school life which became more and more isolating and upsetting as I shut myself off from everyone around me and began to suffer in so many ways due to that, and alongside that I had my running life where I could release myself, feel at home and be surrounded by people who I actually felt comfortable being with. 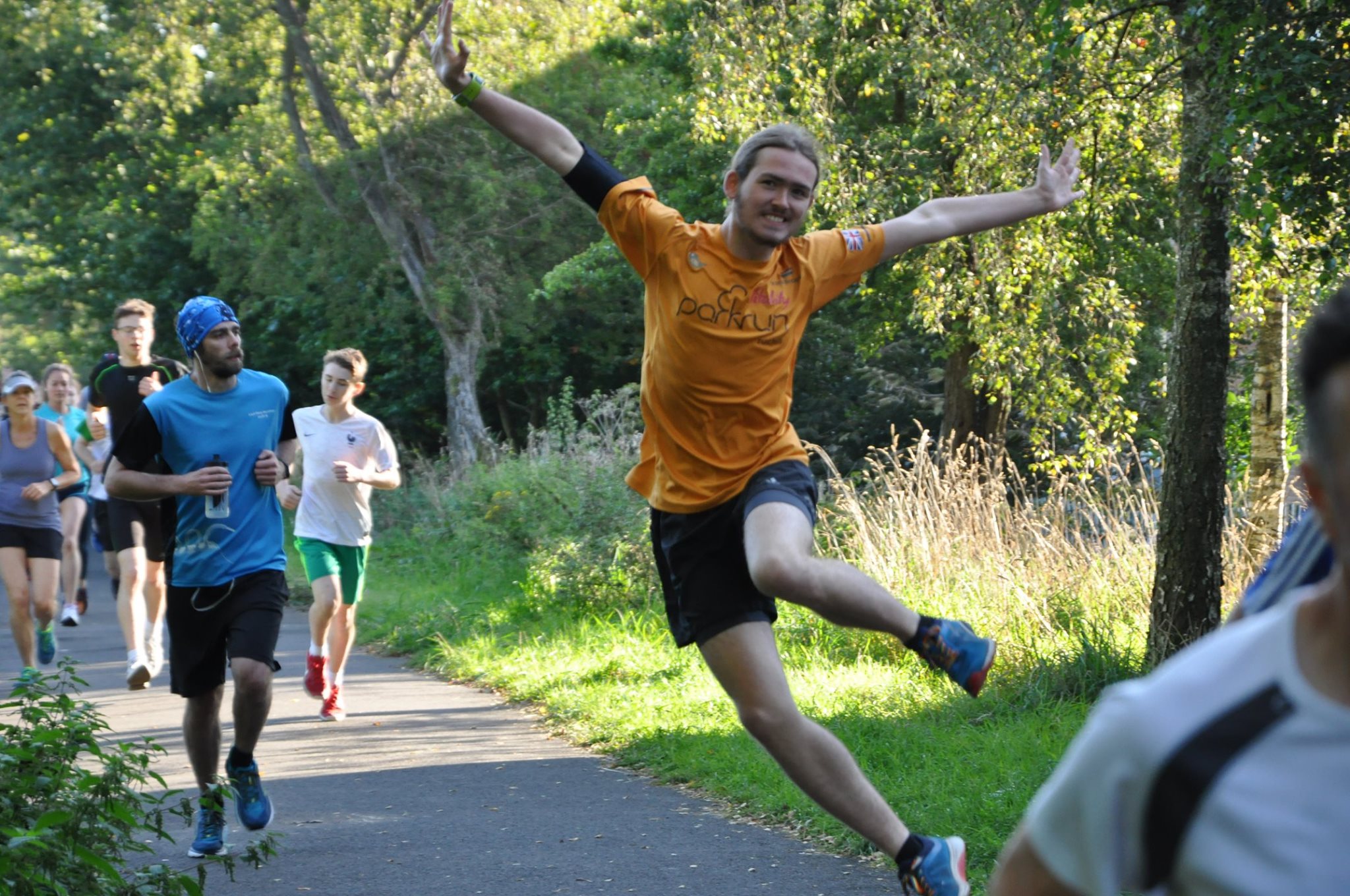 The pandemic beginning in early 2020 had a large effect on my mental health, as it did with so many people as it was and continues to be an incredibly challenging time in so many ways. Once again, it was running that kept me grounded but without parkrun, it wasn’t quite the same. I realised how important running with a group of people was and that while running solo got me outdoors in the fresh air for a while, I missed the social aspect of parkrun more than anything.

I was compounded with yet more misery after I was hit by a mysterious injury in July 2021 and was unable to do any running at all. Having moved out of the family home and living alone, as well as taking a year out of university in order to make the beginnings of some sort of recovery, I felt myself being more isolated than I had ever been. The eventual glorious return of parkrun was just around the corner though, and I am so glad that it was.

parkrun coming back meant that I got to see people again, I couldn’t run but I was there every week as a volunteer just so that I could get involved and feel that I was a part of something again. It meant that at the weekend when I had the strength to come along to the park to help out I would be rewarded with being able to talk to fellow parkrunners and friends, something that without parkrun just would not have been possible. 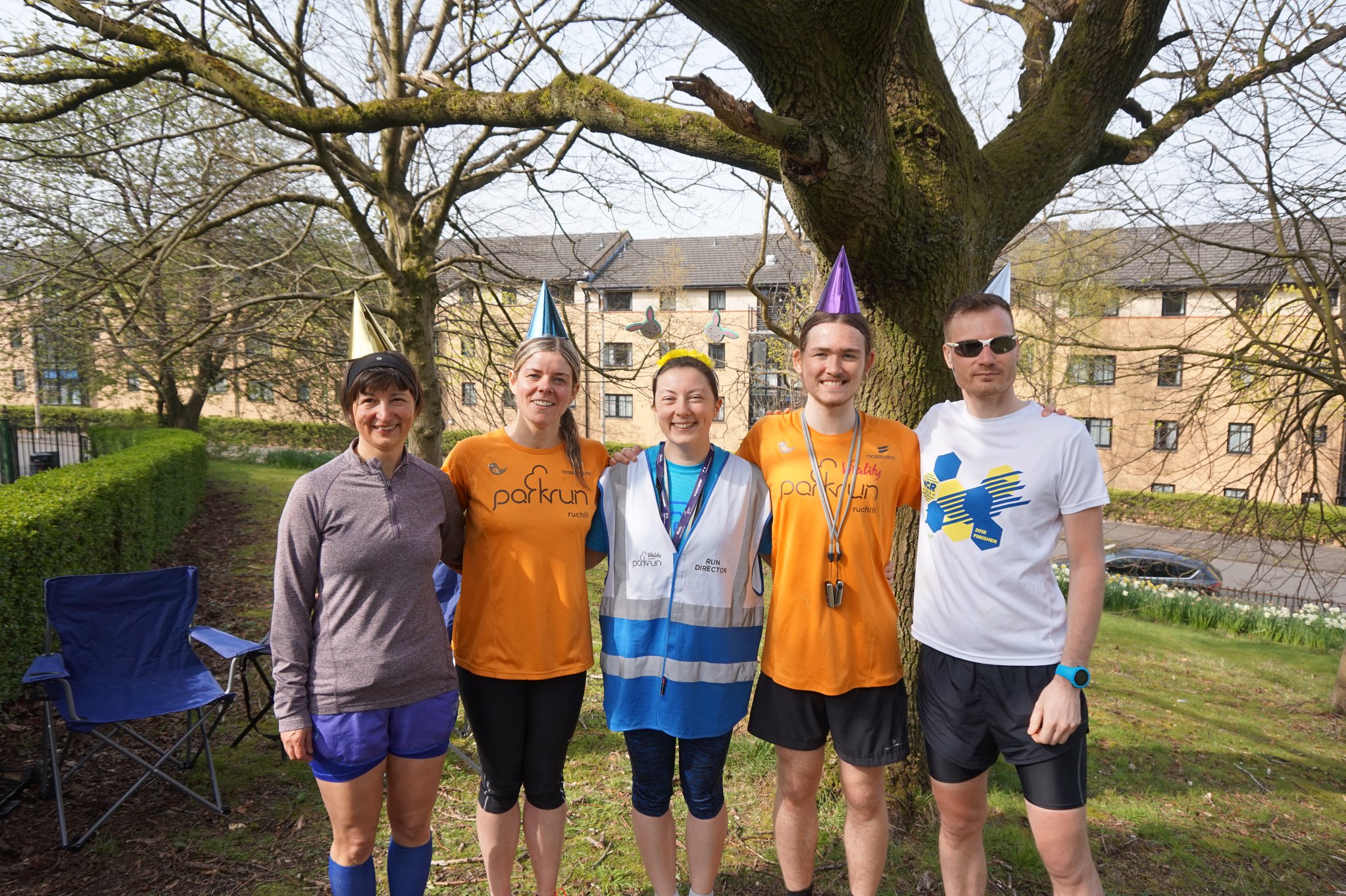 Towards the end of 2021, I started doing a bit of parkrun tourism which included visiting various junior parkruns on Sundays as well as different Saturday parkruns. After attending Elder Park junior parkrun, I felt like it was such a welcoming environment that I began to come along every week after I had finished my volunteering tourism of the local junior parkruns.

After one of the events, there was a meeting where a discussion was being had about a proposed 5k parkrun in Elder Park. I attended to offer my advice as an experienced run director myself, and ended up offering my services as part of the core team. As the team was made up of five run directors, now six, I thought it wasn’t that much extra effort to join the core team alongside that of Ruchill.

After a while, I was approached by the event director of Elder Park junior parkrun who asked if I would like to join their team as a run director too. I was grateful to oblige, as I was there practically every week anyway, it was no extra effort to take up the role of run director at another parkrun. Soon after, I became involved in a fourth parkrun, Barshaw junior parkrun.

I went along one week when Elder Park junior parkrun was cancelled, and the event director mentioned in passing that a couple of their run directors were stepping down. I said that, when I was able, I would be willing to help out as a run director especially as there is quite a large core team at Barshaw so there is not a lot of pressure to be there every week. I will have my first run director shift at my fourth different parkrun on 31 July! 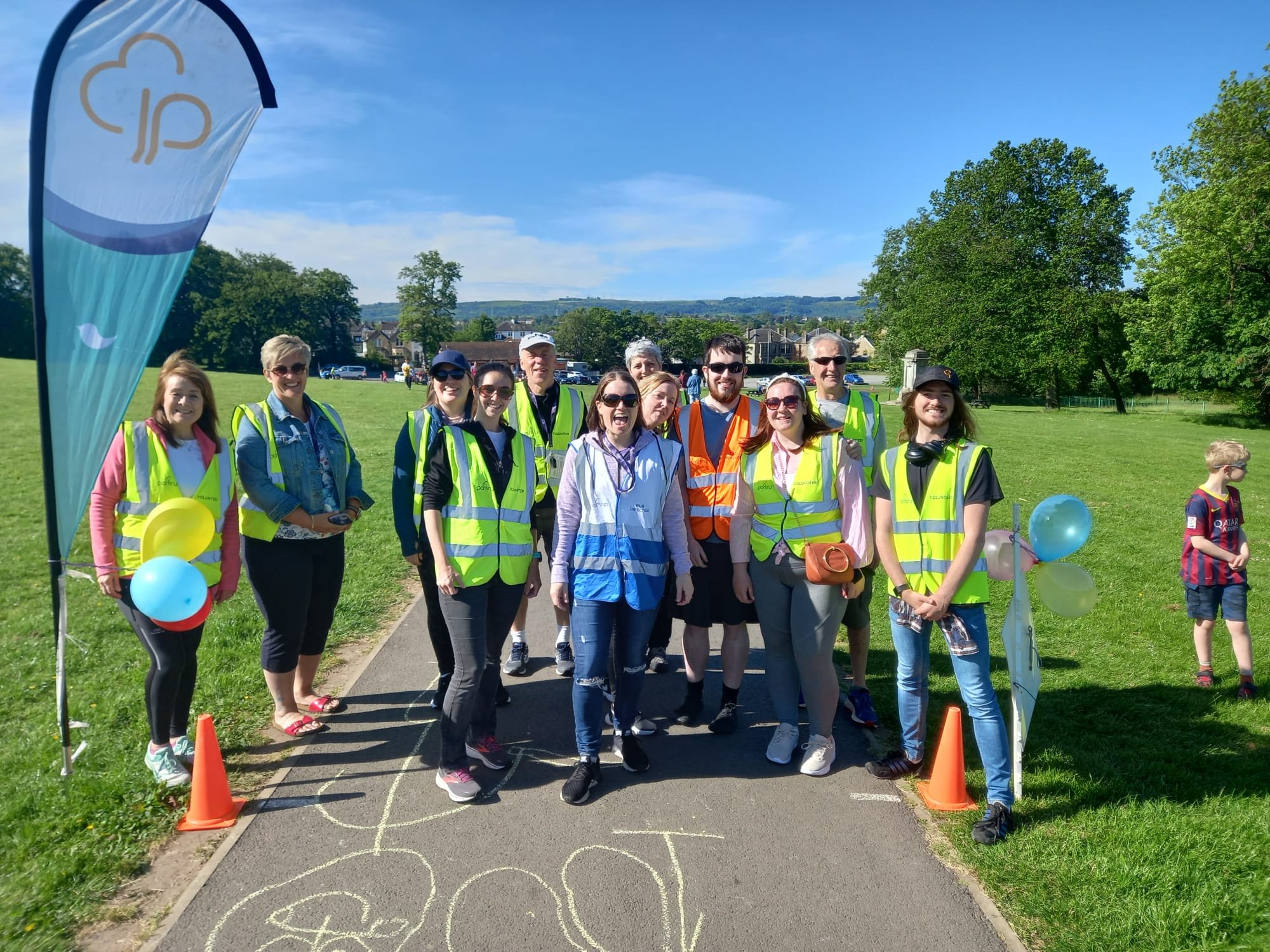 There are honestly points where I wonder where I would be without running, if I would be here at all. There have been plenty of points over the past few years where I have felt like there is literally nowhere for me to go. The friends I have made through parkrun have been such a large part of me still, being here to this day, even by just talking to me on a Saturday morning they have helped me feel like I belong somewhere when everywhere else I have felt so isolated, alone and under appreciated. 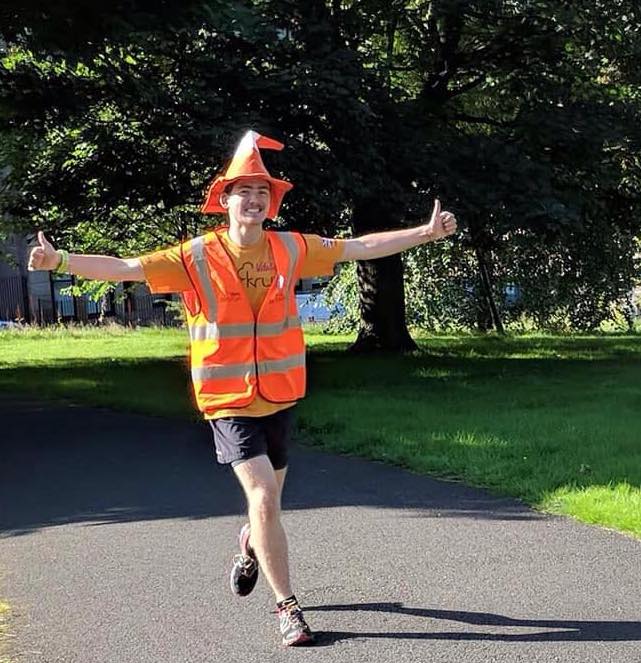 Despite the great differences in age, they make me feel much more comfortable than anywhere else I have ever been. When I am injured, as I have been for 10 months of the last year, I yearn to be back at parkrun to talk to my running friends. I don’t think they understand how much they mean to me, how they are basically the reason that I am still here, how despite just making silly jokes or giving me training tips that they are the reason that I am still around to hear those jokes and take on those tips.

My running friends are much more like true friends to me given how they have embraced me following my recent transition to identifying as non-binary and using they/them pronouns. My fellow parkrunners have welcomed me in in a way that I simply wasn’t by those who were closest to me at a time that I really needed them several years ago. Without those people, adults and young people wise beyond their years, I would be even more alone than how I generally feel a lot of the time and I cannot thank them, the general running community and the sport as a whole for what it and they have done to shape my life in such a positive way.

Peter Jones was put off running at school but has recently discovered parkrun and how enjoyable exercising with others outdoors can be, alongside the added benefits to physical and mental health it provides.   I’m a 43 year old nurse and having been forced to run in school, I resented it and had no plans…

A match made …. at parkrun!

Linwood parkrun provided the romantic setting for Melissa and Ryan Waldron to first get chatting, and a while later for Ryan to propose!   On Saturday 6 July 2019, I ventured down to my local Linwood parkrun where a familiar face from my running club said hello and invited me on a cool down jog…