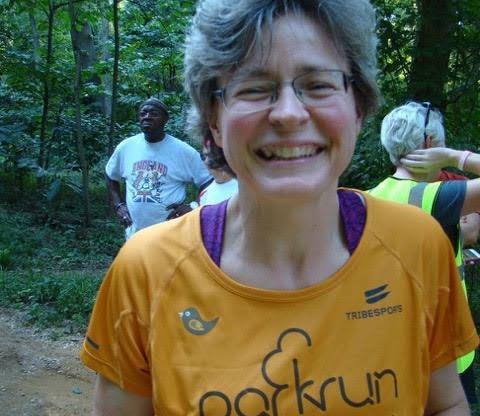 “If you had told me 3 years ago that I would be heading up a weekly 5k today, I would have laughed in your face. I was no runner, and had no interest in becoming one. Having a husband who had run all his life and was a pretty competitive runner was no incentive—if anything, it was a disincentive.

But there was an annual 5k that weaved right through our neighborhood, and that everybody took part in, and after walking it or just spectating for years, I thought what the heck, I’ll do a couch-to-5k program and finally run the thing. Well that happened, but along the way, I discovered, at age 49, that I love running. Who knew?

“What does this have to do with parkrun? Everything! The factors that led to me giving running a try were: accessibility, inclusiveness, and community involvement. For the past 3 years, running has enriched my life in a hundred ways.

I want to pay it forward. I don’t kid myself that parkrun will make everyone a runner. But parkrun provides the best opportunity for anyone who has never run before to give it a try: it’s free, it’s close to home (for anyone who wants it badly enough to start one), if you’re busy one week, it’s still there next week, it is incredibly welcoming to people of all ages, shapes, and sizes, and it’s an event with familiar faces cheering each other on, week after week.

It is nothing short of magic that a simple idea in one guy’s head nearly 12 years ago has positively impacted the lives of so many people in so many ways. I couldn’t be happier to be helping share the wealth with others. Come visit us at College Park parkrun!”

The first parkrun in Poland took place on 15 October 2011.   As the country celebrates its ten year parkrun anniversary, Poland’s Country Manager Jakub Fedorowicz takes us for a look back at some special moments.   Back in the autumn of 2011, when five participants arrived at the very first Polish location, parkrun Gdynia, no one…