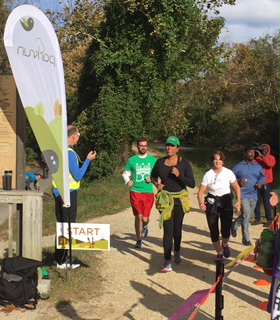 Two runs, two mayors:  Patrick Wojahn, Mayor of of College Park, Md, showed up to run at his local parkrun on October 22nd. On the same day, Muriel Bowser, Mayor of Washington, DC, showed up for her second parkrun at Fletcher’s Cove. This is no coincidence: both have been very supportive of parkrun in their towns from the beginning, as a way to help their constituents lead healthier and happier lives.

Clermont Waterfront parkrun, Fl, our largest event by numbers, single handedly broke the historical 10,000 runs mark in October. Another fun fact is that they’ve had over 1600 out-of-country visitors since their first parkrun 3 & 1/2 years ago.  Proximity to ‘the Mouse’s house’ in Orlando certainly has helped…

Meanwhile, Crissy Field, parkrun’s status as the westernmost parkrun in the world – meaning that their last finisher is the last parkrunner in the world each Saturday – is challenged by the start of Richmond Olympic parkrun, Vancouver, at the end of October. Honolulu parkrun, anytime soon, anyone?

Watch this space, there’s a new parkrun on its way. Did somebody say Ohio?

Finally, we wish to welcome Lynn Boven as the new Event Director at Livonia parkrun, Mi. Lynn takes the reins from Rick and Lori Brauer, who started the first parkrun in the US, in 2012 and took the lead on getting parkrun going in this country. We are very thankful for the leadership they have provided over the years, and hope they will see – and run – the vision of a parkrun in every community that wants one. Thank you Rick and Lori!

The first parkrun in Poland took place on 15 October 2011.   As the country celebrates its ten year parkrun anniversary, Poland’s Country Manager Jakub Fedorowicz takes us for a look back at some special moments.   Back in the autumn of 2011, when five participants arrived at the very first Polish location, parkrun Gdynia, no one…