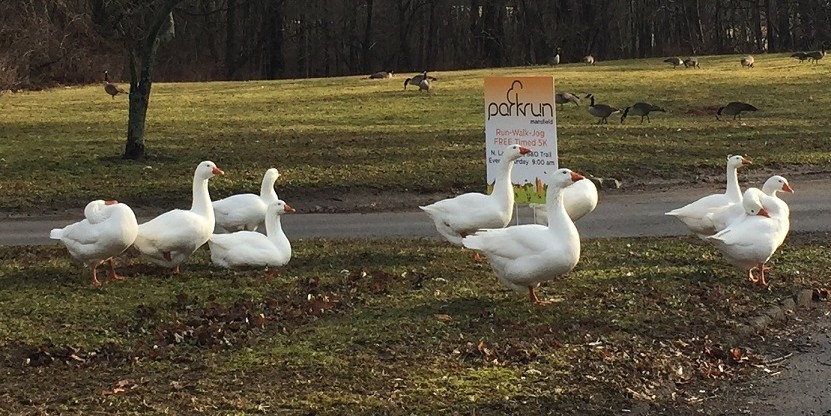 Colin Phillips, Co-Event Director at College Park parkrun, tries his hand at some parkrun tourism in Mansfield, OH and, for good measure, sets a (likely fleeting…) course record on their inaugural run.

Mansfield, Ohio probably wasn’t on your tourism bucket list, but for parkrunners it now should be. With a crack team of volunteers in charge of our home parkrun (more on that below), Andrea Zukowski and I drove the 400 miles from DC to run in the inaugural Mansfield OH parkrun. We’re very glad that we made the trip.January 21st sounds like an inauspicious time to launch a parkrun in central Ohio, so when the day dawned mild and sunny, everybody was doubly happy. The run venue has a similar effect. After passing through streets that look like they have seen better days, North Lake Park takes you by surprise. Pass the ducks and swans to reach the huge gazebo that serves as parkrun HQ. No need to worry about rainy run briefings or bedraggled barcode scanners at this parkrun. After the briefing it’s a short walk to the start on the beautiful B&O Railroad Trail. Mansfield may be the fastest parkrun course in the continent. It’s a simple out-and-back on perfectly smooth asphalt, with nothing remotely like a tight curve (except the turnaround, of course), and with shade from trees throughout. There’s a very gradual rise in the first half, and a corresponding drop in the second half. But the grade is barely noticeable, so you get to feel smug about your speedy second half. We heard that there had been a big storm a week before the launch, so volunteers had been working hard to clear debris from the trail. It was fantastic to see an enthusiastic crowd of 87 parkrunners turn out. This is the second largest inaugural for a US parkrun. Not bad for a mid-size town in Ohio in January. Credit for this great turnout goes to the Mansfield team. Karen and Steve Crane are ringleaders, but they’re already working closely with Karyl Price from Richland County’s Creating Healthy Communities program, among other local groups.I’m a mild coffee snob, and I’m a big fan of the place that we use for our home parkrun. But I think Mansfield has us beat. Relax It’s Just Coffee is a cafe-bakery in downtown Mansfield, in a lovingly renovated building that looks like it has been snatched from New Orleans. The coffee is outstanding, the pastries are deliciously evil, and the merchandise tells it to you straight. On the day of the parkrun launch, they had the longest line they had ever seen, and there was still plenty of room to hang out. We also got to share a few tricks of the trade with Karen and Steve for fixing parkrun results anomalies.We stayed at the Holiday Inn in downtown Mansfield, which is about the only option if you want to be close to the parkrun and to the post-run coffee. Not the highlight of our trip, but the run and the people more than made up for it. Downtown Mansfield is undergoing a bit of a renaissance. After your coffee you could visit the charming carousel museum, or you could take in the Shawshank Trail. Later in the day you could visit the Phoenix Brewing Company. But don’t arrive too late, as this is a town that eats and sleeps early (perfect for parkrun!).Not everybody will want to drive 400 miles for a parkrun. But it’s a great stop off if you’re on a road trip. And millions of people live within an hour or two of Mansfield, making it a fun morning adventure. On our visit we met Lynn Boven from Livonia parkrun in SE Michigan. Lynn is almost certainly the most prolific US parkrunner, and he’s now one of the Livonia event directors. Mansfield was his 163rd parkrun, after running Livonia 162 times. This was the first time since Livonia launched in 2012 that there was another parkrun within 10 hours drive for Lynn. On Jan 1st 2016 there were only 4 parkruns in the US. Mansfield is now the 8th event, and with a good many more in the pipeline, we’re looking forward to many more opportunities for US parkrun tourism.Oh, and I almost forgot to mention the story of our runs. You might recall that on Jan 21st there was something big happening in Washington, so at 8:45am, while talking with the lovely Mansfield team, I started getting texts from our run director, who was stuck in traffic on I-95. We hurriedly put out some calls and texts to our volunteers, Andrea did a run director tutorial over the phone, and soon everything was under control. At 9:10 I got a text from our run director to say that he had rolled into the start just as the runners were setting off. At that point I was one mile into the Mansfield parkrun. That gave me peace of mind to turn attention to my own running, so I got to enjoy the fast final mile at Mansfield, and unexpectedly found myself the first finisher and inaugural course record holder. Yet more reasons to #loveparkrun.