Fletcher’s Cove celebrated its first two 50 club milestones in February: Jolanta Blazaite, who had a considerable head start, previously running in Wimbledon Common parkrun (UK), and Jeff Neradka, Fletcher’s first fully home-grown 50 club parkrunner, with all runs completed in the US since the start of the event, in Jan. 2016, barely missing a run during the year!.

College Park celebrated the first 3 official parkrun milestones, all juniors: Ian Parsons, Sam McGranahan, and Thomas Parsons all earned their 10-club shirts. The achievements were celebrated with cake, of course! In addition. Cindy Conant, a new addition to the parkrun family, she set the two best age-graded runs ever for parkrun USA. And the following week she returned as a volunteer! 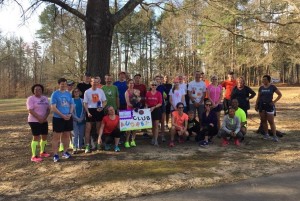 In Cleremont Waterfront, 2017 50 Club honors go to Daniel Whitehouse, with others on schedule to reach their milestones in March.

Finally, Livonia parkrun, the first event in the US, will turn 5 on June 3rd, and is already encouraging parkrunners to start planning a visit for what will certainly be an epic celebration of five years of parkrunning in the US. There are at least seven parkrunners from Livonia in the 100 milestone club, among whom we’ll likely see the first American member of the legendary 250 club!

With apologies to any runner or volunteer whose milestone may have been missed here - and an invitation to contact us to correct our error. Congratulations to all parkrunners, whether you’ve just started your journey or already have parkrun tattoed on your legs!