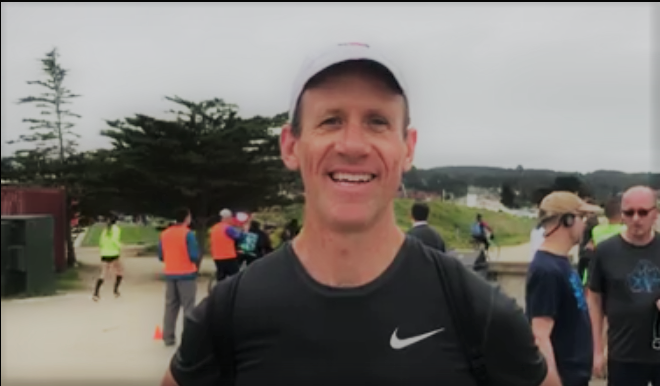 We often hear people say that they wish they could do parkrun more than once per week, but Washington DC area parkrunner Paul Durbin has gone to extreme lengths to make that wish a reality. On March 18th Paul did Cornwall parkrun at 8am in Auckland, New Zealand, then he flew to San Francisco where he did Crissy Field parkrun at 9am.

Lots of runners enjoy sampling other parkruns when they are traveling. Your parkrun barcode is a free entry into around 1000 weekly events worldwide, and it’s a fun way to meet friendly people in new places. For some, ‘parkrun tourism’ becomes the goal of the travel, and there are some people who make a point of visiting as many different parkruns as possible. A couple of months ago Norm Driskell of London visited Washington DC where he ran his 199th different parkrun at Roosevelt Island parkrun on New Year’s Eve and his 200th  at College Park parkrun on New Year’s Day.

New Year’s Day is the one day when it’s sometimes possible to do two parkruns in one day. In areas with lots of parkruns some of them start later on January 1st, so that people can start the new year with a double parkrun. This hasn’t been possible in the US before, due to the great distances involved, but with new parkrun USA events coming online in 2017, 2018 might be your first opportunity for an American New Years Double.

But there is one other way of getting in two parkruns in a day that has been discussed but never attempted, to our knowledge. New Zealand is 19-21 hours ahead of the west coast of the US, depending on the time of year. So if you can use that to squeeze in a flight from New Zealand to the US, it is in principle possible to do two parkruns in the same morning. But the flight has to be at the right time (and on time!), and the parkruns need to be close enough to a major international airport. In late 2016 United Airlines introduced a new direct flight that is remarkably well timed for parkrun, leaving Auckland, home of 3 parkruns, at around 2pm, and landing at San Francisco, home of Crissy Field parkrun, at 6:30am the same day. Paul was a couple of minutes slower in Crissy Field than in Cornwall. Perhaps it was the jet lag, or perhaps he was just soaking in the amazing views of the Golden Gate.

Are there other ways of pulling off a double like this? Probably, but it’s more complicated than we thought. Since summer in the Southern Hemisphere is during the northern winter, time differences change by a couple of hours over the course of the year. Also, the Auckland – San Francisco flight that Paul took is seasonal, so by the time you read this your next chance for that double won’t be until November. A double starting in Sydney, Australia could work, as you have a choice of 3 parkruns very close to the airport. But if you’re traveling in the northern summer you have 2 fewer hours to play with, so you’d probably want to focus on Kamay parkrun, which starts at 7am, unlike most parkruns in New South Wales. In any case, the timing would be tight on the SFO end, as it’s some distance from SFO to Crissy Field. So you might be better off pairing Sydney with the recently launched Richmond Olympic parkrun in Vancouver, Canada, which is conveniently located right next to the airport. In Singapore, East Coast Park parkrun is also very close to the airport, but even in winter the timing is so tight that you’d probably need to be flying first class in order to speed through security and immigration. That would be one way of spending all the money that you save at parkrun.

Ed. Note: We’re awed by Paul Durbin’s feat, and we’d like to hear directly from him next time he shows up to run, but Colin Phillip’s – this article’s author – investigative knack is quite something, too. Colin, would you consider a career as a parkrun tourism travel agent?