“We have never felt so connected to our community” 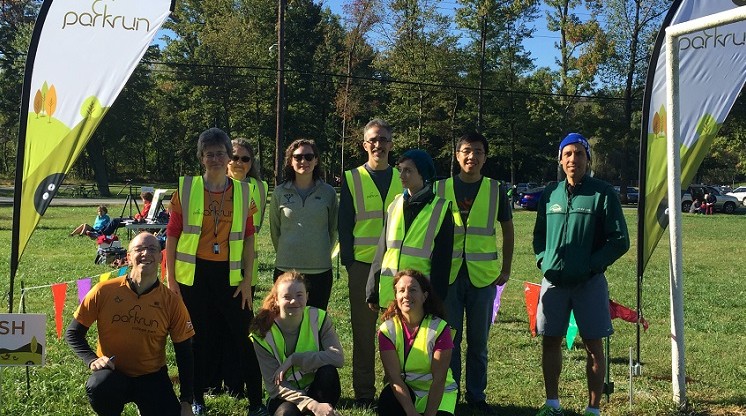 Creating a parkrun in our community is one of the most rewarding things that we have done together. We feel more connected to our community than ever before, and we have met so many people near and far since we started College Park parkrun in 2016.

We come from very different running backgrounds. Colin has been a competitive runner (of no great distinction) his whole life, whereas Andrea did not start running until she was 49, and she knows what it’s like to be an apprehensive beginner. We had vaguely heard about parkrun a few years ago, but we didn’t really “get it” until we tried some parkruns during family vacations in the UK (Colin’s a Brit, Andrea’s from Detroit). We wished we had something similar closer to home, but had no idea how to make that happen.

That all changed in December 2015 when Colin’s brother in the UK sent us a Washington Post article about the launch of Fletcher’s Cove parkrun. Somehow Andrea quickly decided that if they could start a parkrun, then she could too. We visited the Fletcher’s Cove inaugural, chatted with the team there, and immediately set about starting College Park parkrun. We created a Facebook page “Let’s Bring parkrun to College Park” and the next Saturday we started unofficial weekly Saturday 9am runs on the bike trail that we hoped to use for our course, followed by meetups at a nearby coffee shop. These “proto-parkruns” were very informal: no timing, no volunteers, and no accurate measurement — we simply ran out-and-back to a convenient landmark on the trail. Our only equipment was a stake that we used to mark the start, with a little flyer to tell other trail users what we were up to. We never had more than about a dozen runners. On one particularly hot and humid summer morning it was just the two of us. But those 33 trial runs were very valuable. They got us comfortable with the Saturday morning habit, they taught us a lot about our course in different weathers, they built what became our core team, and they showed some potential sponsors that we were serious. The process of getting park permits, insurance, raising one-time funding for the event was sometimes frustrating. But we built a lot of valuable connections along the way.

Since October we have now held 29 events, with around 1500 runs by 500 runners, and around 80 people contributing as volunteers. But the numbers don’t begin to tell the story. We have learned a huge amount. The details of organizing the weekly runs and the results seemed complicated at first, but after a few weeks it became surprisingly easy. We have learned that despite the amazing international success of parkrun, you can’t expect big initial interest for a US event. People don’t know about parkrun, and until they see it in person they have no reason to expect it will be different from any other one-off 5K event. Building a parkrun community takes effort, and you get out of it what you put in. We have learned a huge amount about how to use various communication channels to engage with our community. We have learned that things sometimes don’t go according to plan, and that those times can be the most fun. One week the stopwatch died (we reconstructed the results from photo time stamps). Another week the run director got stuck in the traffic jams headed to the January 21st DC Women’s March (we quickly trained up a new run director over the phone; on that day we were in Ohio at the Mansfield parkrun inaugural). And another week novice marshals stationed themselves only halfway to the correct turnaround point (our quick-thinking first finisher picked up the cone and ran with it to the correct location).

But the main thing that we have learned is the strength of human connections. They are central to what gets people coming back week after week. It has been a thrill to get to know so many people who we would never have met otherwise. We tried contacting many different groups via letters or emails, and that rarely went anywhere. But when individuals come to our parkrun and enjoy it, and then start bringing their family and friends, that’s what really makes a difference. That word-of-mouth spread takes time, but it’s so worthwhile. Our participation numbers are not huge, but we’re really happy with the number of people who are now regulars and with the depth of support from our local community. Both our current mayor and our former mayor are now regular parkrunners. Our initially skeptical parks department is now an enthusiastic supporter. On April 1st we teamed up with them and the University of Maryland’s Good Neighbor Day for an event that combined parkrun with trail cleanup and tree planting near our start/finish area. (Here’s a nice video about that event.) They’re now offering to create signage to help publicize parkrun, and they’re interested in the possibility of additional parkruns in the county. Our post-run coffee meetup is quite popular — we routinely see 20-30 people at The Board and Brew after parkrun — and that further adds to the personal connections. The strong sense of community has also made it fairly easy to line up volunteers every week. Sometimes we are not sure on Friday night how the various roles will be covered the next morning, but there are always people willing to step up to help. After 6 months we’re now expanding our core team from 4 to 10 people.

Our Christmas holiday experience nicely illustrates how parkrun has changed our lives. Mary Botto is an event director at Mosman parkrun in Sydney, Australia who grew up in Maryland and attended UMD, long before parkrun existed. She flew halfway around the world to attend her family’s traditional December 26th gathering, but wanted it to be a surprise. Her flight arrived too late for our December 24th parkrun, but she was still incognito on the 25th. So our core team arranged to meet up with Mary for a ‘freedom run’ on our parkrun course, and then she joined us for a very enjoyable Christmas dinner, sharing stories of life in Australia, Europe, and the US. One year ago there was no way that we could have imagined holidays like this.

If you are interested in learning more about the process of creating a parkrun USA event, Colin has written a couple of blog posts, about launching the event and about what they have learned since the launch.