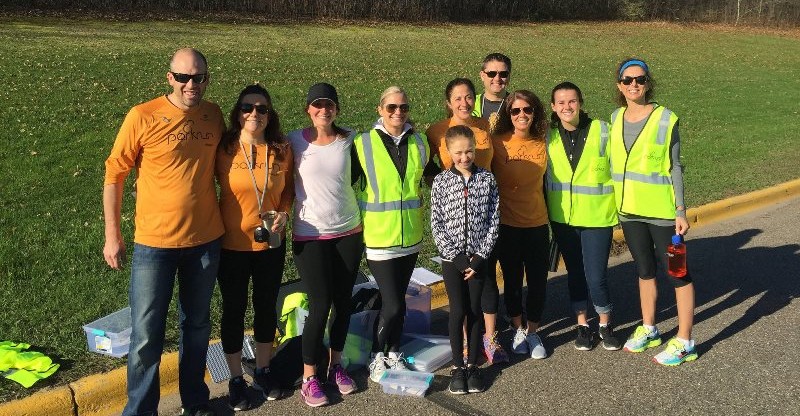 Eagan parkrun started on a gorgeous morning, April 22nd, 2017. We had 47 runners and 14 volunteers… a great effort by all and really a smooth event. Our first run report is here:

The best part, now that we have actually started the events is speaking to runners and other people that just don’t comprehend the idea… that it is actually free. In this fast paced, connected world, less and less is free, but parkrun not only is, it always will be. Once they get it, BOOM, they are a parkrunner.

The story of Eagan parkrun really starts back in 2014. I was exposed to parkun near Birmingham, UK in late 2014. I was living in England and had joined a local run club (Knowle Dorridge Running Club shoutout!), so heard plenty about parkrun. I actually didn’t run a parkrun until the following August in 2015, when I ran with my family at Coventry parkrun and then Brueton parkrun in Solihull, UK. I managed to get in three total that summer prior to unexpectedly returning to the US and Eagan… but I had been “bitten” as they say and wanted to get a run off the ground in my home community. Eighteen months later, Eagan parkun was a reality. I would break that timing up in three chunks… 1) getting organized and sorted out with what, how, who, etc. parkun US was a huge help here. 2) Took a little while to sure up permission from the city. It just wasn’t something that had been done before… which was intriguing, but also just added some time. 3) winter!! I didn’t want to start the run later than October for fear of sub-zero temperatures and single digit runner counts.

Throughout the process we received to top notch support and guidance from Darrell Stanaford from Roosevelt Island parkrun and US . In the run-up to our inaugural, I was able to run as a tourist at Mansfield, OH and Willoughby parkrun in Sydney. Karen Crane at Mansfield has been a big help and always open to bouncing questions off her or a quick idea. She also sent me all sorts of cheat sheets and laminated cards to help make sure we were successful from Run #1. Special thanks goes to Colin Phillips, co-ED at College Park parkrun, for making the trip out to MN and participating in our inaugural run, and generally helping make sure things went fine throughout the day. Colin exemplifies what parkrun is all about… people coming together, helping each other, enjoying running or walking, building community and generally a great guy… Thanks Colin from everyone at Eagan parkrun.

Many people, even the volunteers, ask how long in the year does the run go… October, November? Always great to tell them… “no, no, no, this event takes place every week, all year, weather permitting”. We’ll see how the next winter is and how the course holds up. I’m hoping we can run most weeks but expect we’ll need to cancel a handful of runs each winter… it is Minnesota after all.

One other item that has been a big help in preparing for a parkrun as well as getting the spirit of parkrun has been binge listening to the parkrun Show podcast. The show started on September 12th, 2011. It is a weekly recap of parkrun. I’m currently in February, 2013. The show ended March 2015, so only 100 or so more episodes to go. On the show, it’s great to hear from parkrunners, event directors and parkrun organizers from back in the day, where there were ONLY 100-200 parkruns. There has been quite a bit of growth in the last 4 years. Speaking for the team of Run Directors, volunteers, and runners, Eagan parkrun is happy and fortunate to add to the parkrun story, week after week.

An invitation goes out to any parkrun tourists, hope you can make a stop at Eagan parkrun. We are only 10 miles from the Mall of America. You can run in the morning and then shop till you drop!