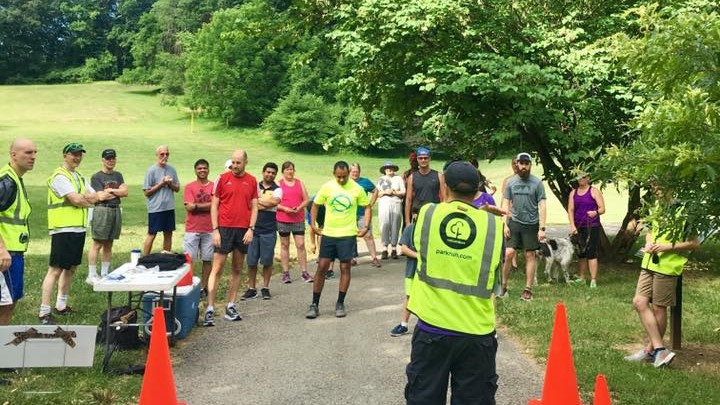 parkrun Ambassador Rory Murphy and Leakin Park parkrun Event Director Doug Jones share their vision for the newest parkrun in the US.

When you mention Leakin Park to people in the US (or even beyond), you typically get one of three responses:
1) “Yeah, I loved Hybrid Theory, but their latest stuff isn’t that good”

3) “Oh yeah, that was in the Wire. Where all the bodies are, right? Have you listened to the Serial podcast?”

The first is usually only from fans of Linkin Park, a nu-metal band. The second normally from people who don’t watch box sets, listen to podcasts or live anywhere near Baltimore.

The third response is worryingly common though. And not without cause either, it must be said. Beyond the podcasts and dramas, Leakin Park has a bit of grisly reputation  locally.

And yet it only tells a tiny fraction of the story. Gwynn’s Falls/Leakin Park (the two are contiguous parks sharing the same overall boundary) is an oasis of tranquility and greenery in the heart of urban Baltimore. It is the second biggest area of urban parkland in the whole of the United States. It has trails and paths and bike trails. It has green meadows and babbling brooks. It has historic buildings and modern improvements. It has car parking, easy access to I-70/I-695, yet also has a bike path you can ride all the way to the Inner Harbor. It has a dedicated group of supporters who look after the park and promote it at every opportunity.

Despite all this, the park remains very much a hidden secret and badly underused. I’ve ran through the park on several occasions since first alerted to its potential as a parkrun venue, and I’ve been stuck by how rarely I see other people – walkers or runners, using the park. One of our local core team members, Doug Jones, elaborates further below
I rediscovered running about four years ago when my neighbor encouraged me to join her on a joint venture towards self improvement.  After much cajoling, Kristie convinced me to begin running again as she started to run for the first time; however, Kristie established a requirement: our running locations had to vary and had to be scenic.  This restriction provided a unique challenge and opportunity to begin exploring various paths in our neighborhood.  Through sheer luck, we stumbled on the Gwynn Falls Trail and fell in love.  The trail became the one location we allowed ourselves to run as often as desired because of its scenic vistas, flat trails, rich history, and quiet surroundings.

After running the trail for years and never seeing more than two people per visit, we lamented how so few people knew about or used the park and its trails.  The only knowledge many locals had of the park came from hand-me-down folk tales of violence with the unfair notoriety solidified by the podcast Serial. We were motivated to try to find a way to bring new life to this urban oasis. Enter Rory Murphy. Through a mutual friend, he heard of our interest in helping parkrun, and we heard he was looking to create a run in Baltimore.  Kristie and I were ready to push hard to use Gwynn Falls for the endeavor, but Rory had already beaten us to the punch and chosen the same location we had always envisioned using.

Rory, with his passion, energy, and knowledge became the hub in uniting different groups that shared a singular goal while using the vehicle of parkrun to accomplish the task. Kristie and I later realized that we were not alone in our goals for the park. The Friends of Leakin Park, the Baltimore City Council, and many others were also looking for ways to bring visitors to the park and showcase all the park has to offer. Together, we are all happy to help bring parkrun to Baltimore, and to bring Baltimore to parkrun.

We hope you can join us.