As usual we were spoiled for choice in this week’s parkrun USA roundup. This week saw some impressive new records, some striking costumes, and some new members of the parkrun USA family. 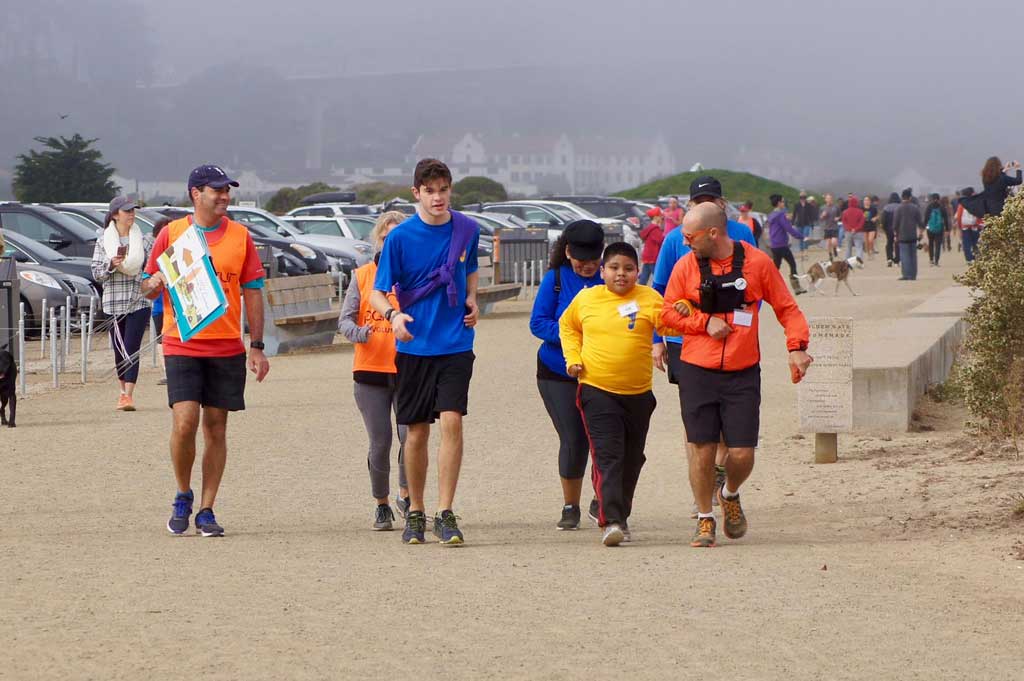 At Crissy Field parkrun this group rounded out an impressive new parkrun USA attendance record of 256, thanks to a big contingent of kids and their mentors from Running for a Better Oakland.

The crowd at Crissy Field was so big, an 83% increase on their previous record, that they ran out of finish tokens and had to make emergency extras. 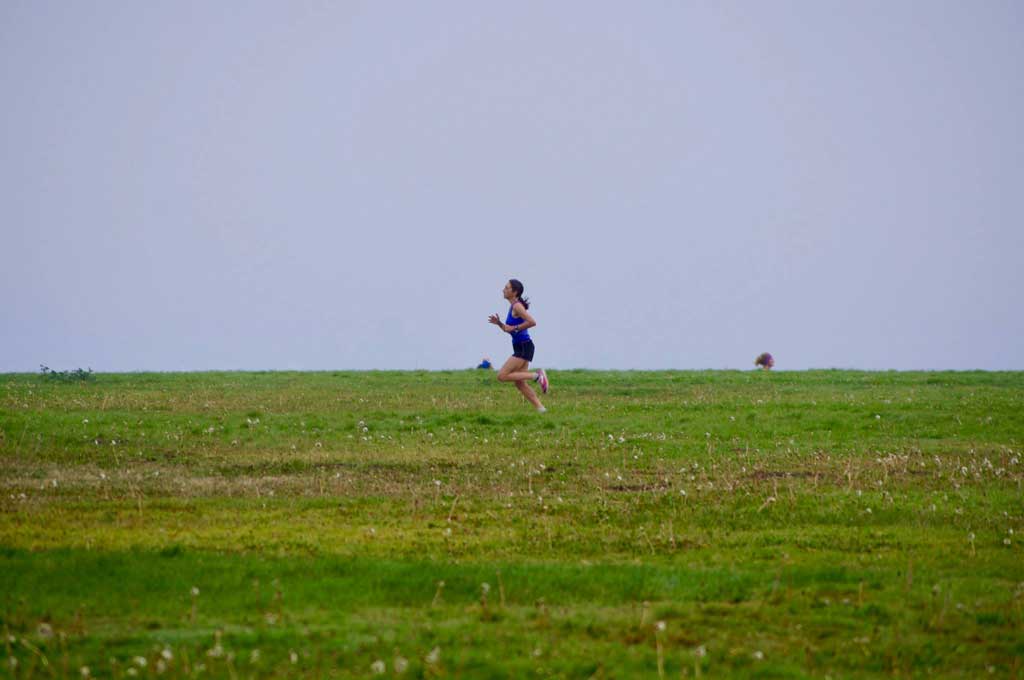 That wasn’t the only record at Crissy Field parkrun this week. Away from the crowds, Rebecca Robinson returned for a second week and set a new parkrun USA female record of 16:53. 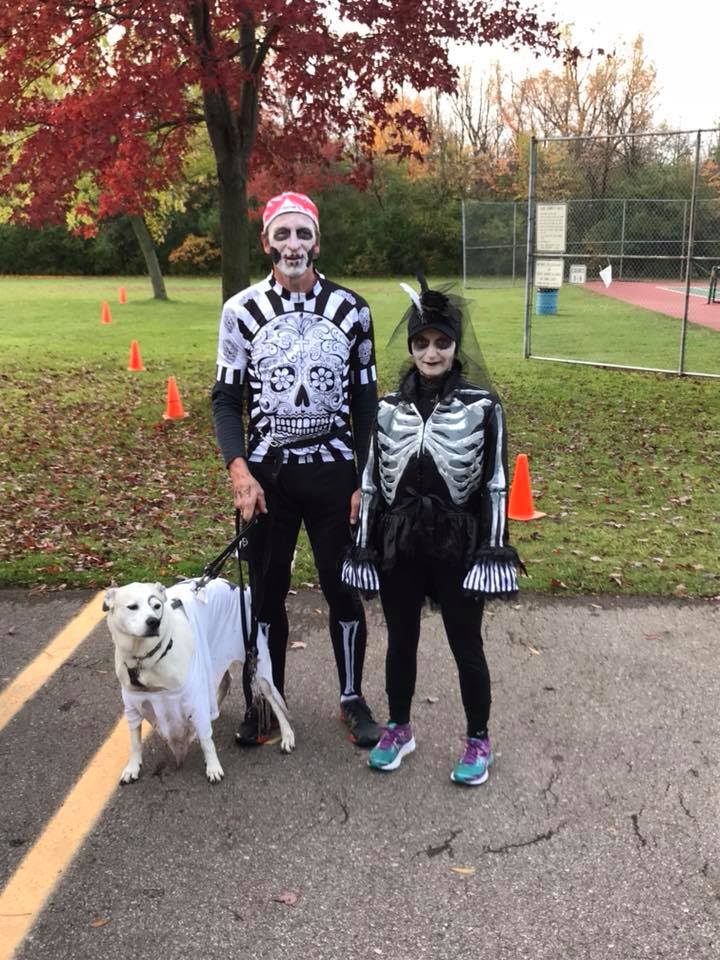 At Livonia parkrun in Michigan even the parkrun dogs were getting in the Halloween spirit. 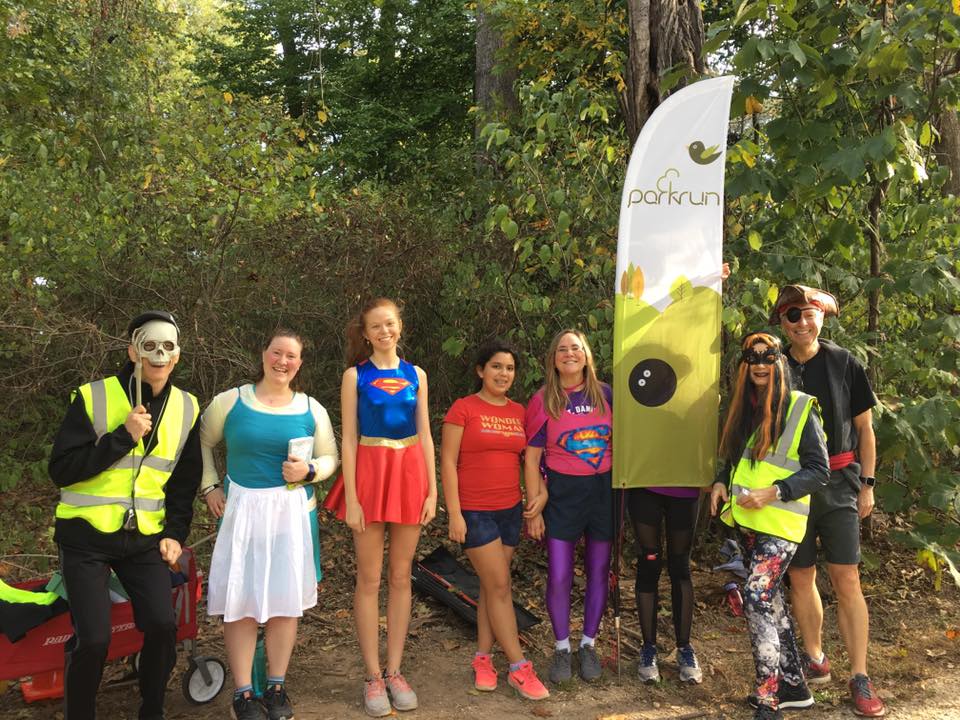 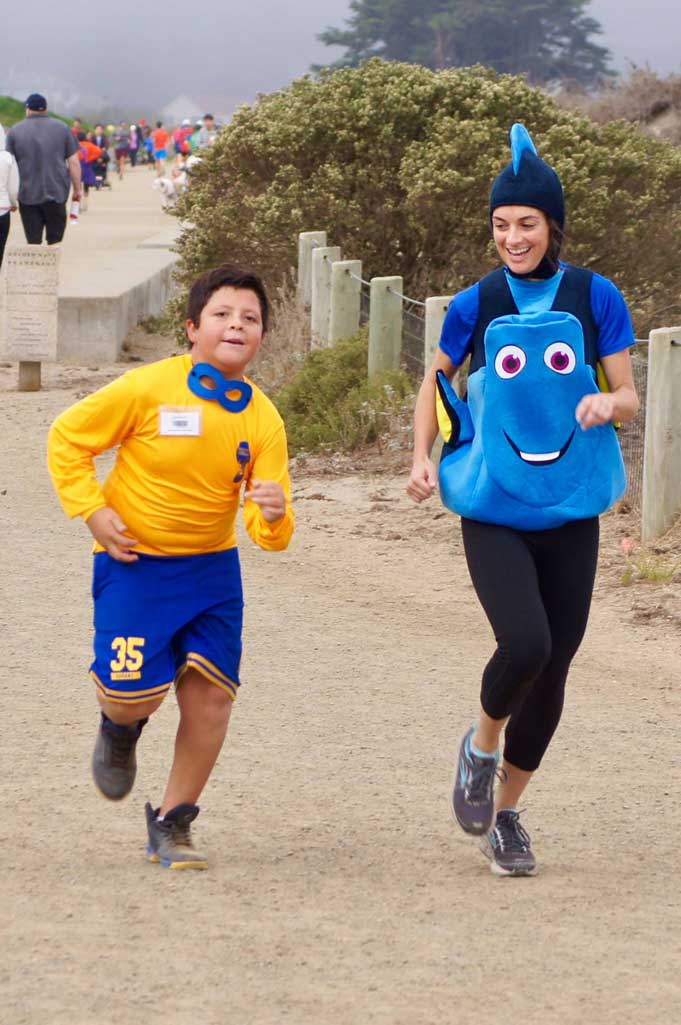 The folks at Crissy Field parkrun of course did not want to be left out of the Halloween costume fun. 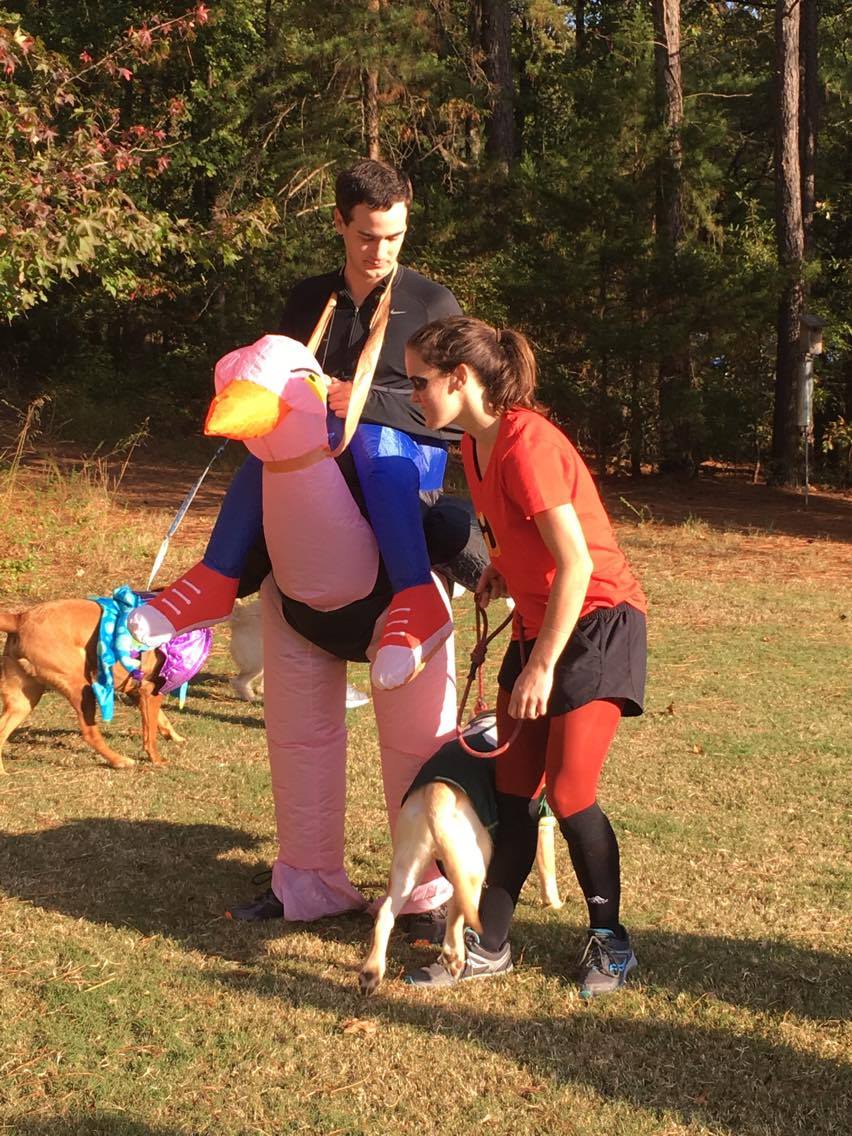 Rob Rhoton’s flamingo outfit at Deep Run parkrun has to be one of our favorites of the weekend. 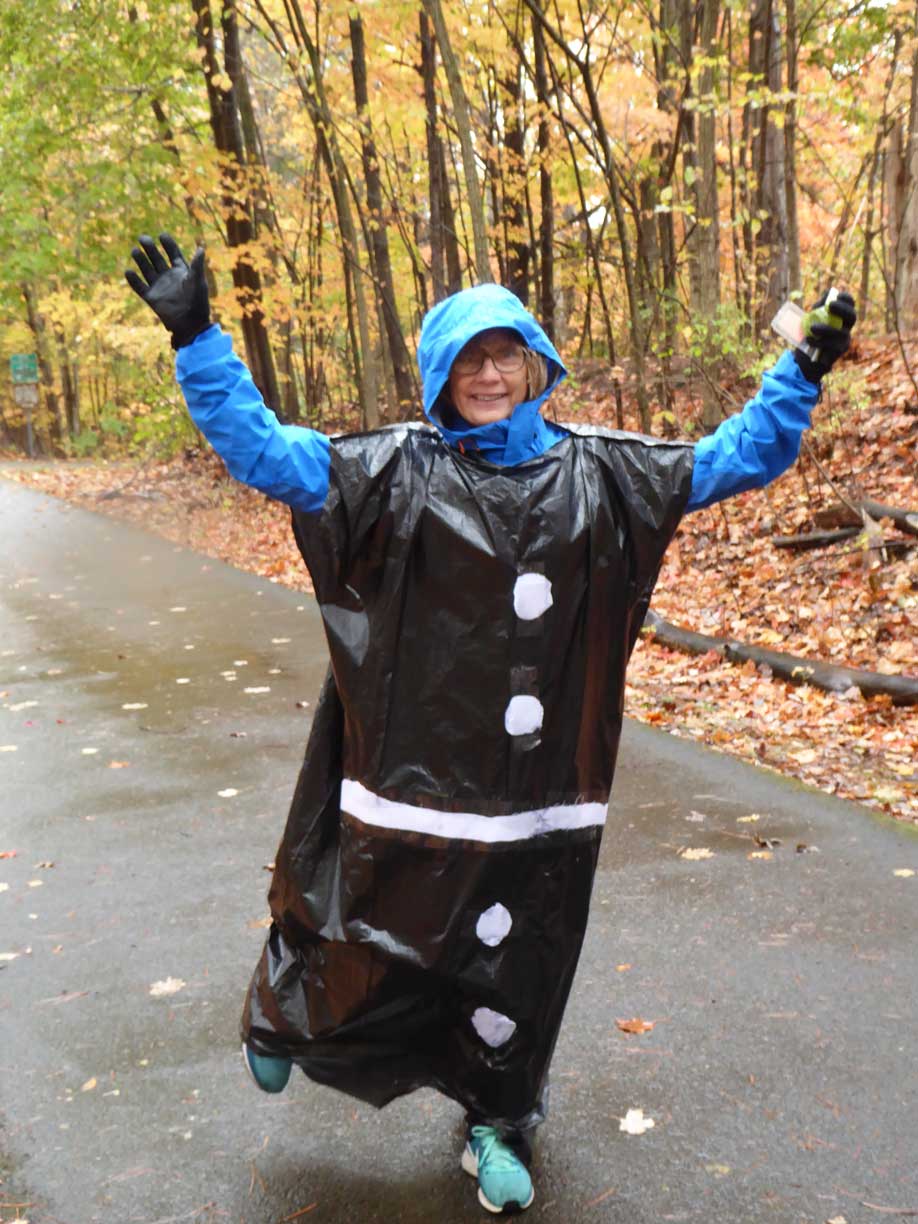 At Mansfield parkrun some of the costumes doubled as protection against the sleet and snow that paid a visit. 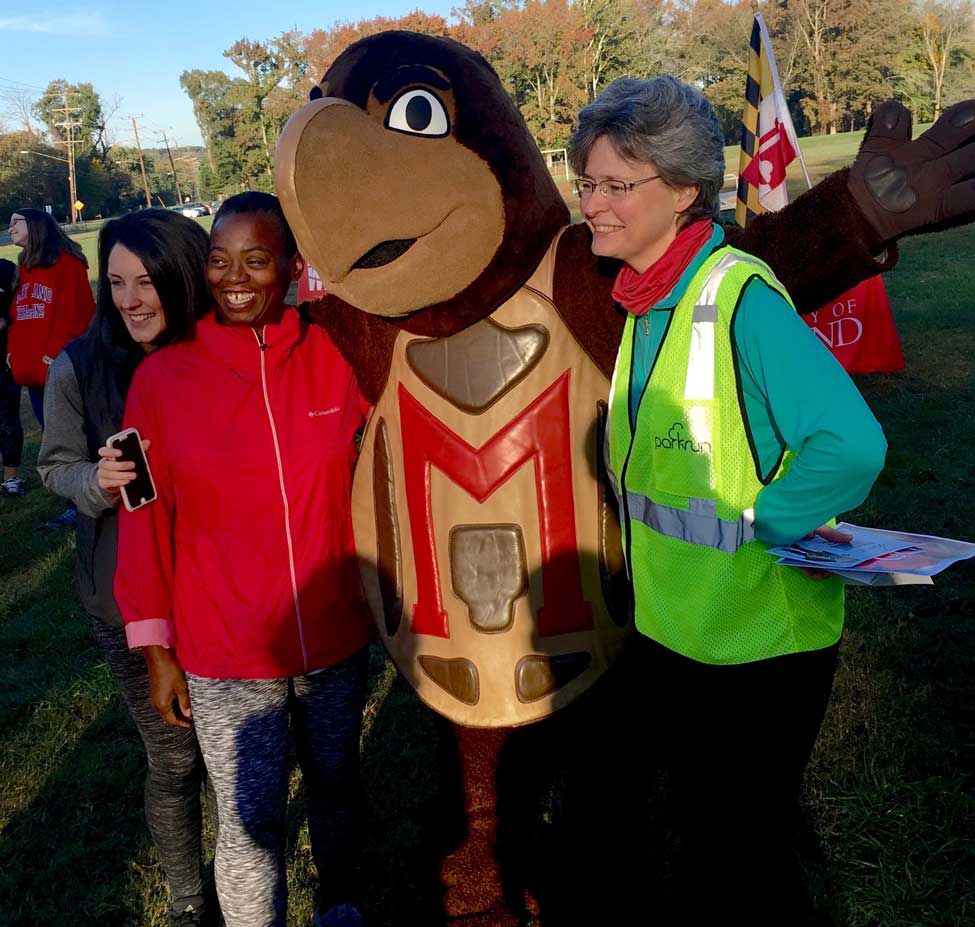 Not a Halloween costume. At College Park parkrun they hosted the University of Maryland Homecoming 5K as a part of the parkrun. Special guests included beloved UMD mascot Testudo. Dogs are welcome to run at parkrun. We could find no policy on terrapin turtles. 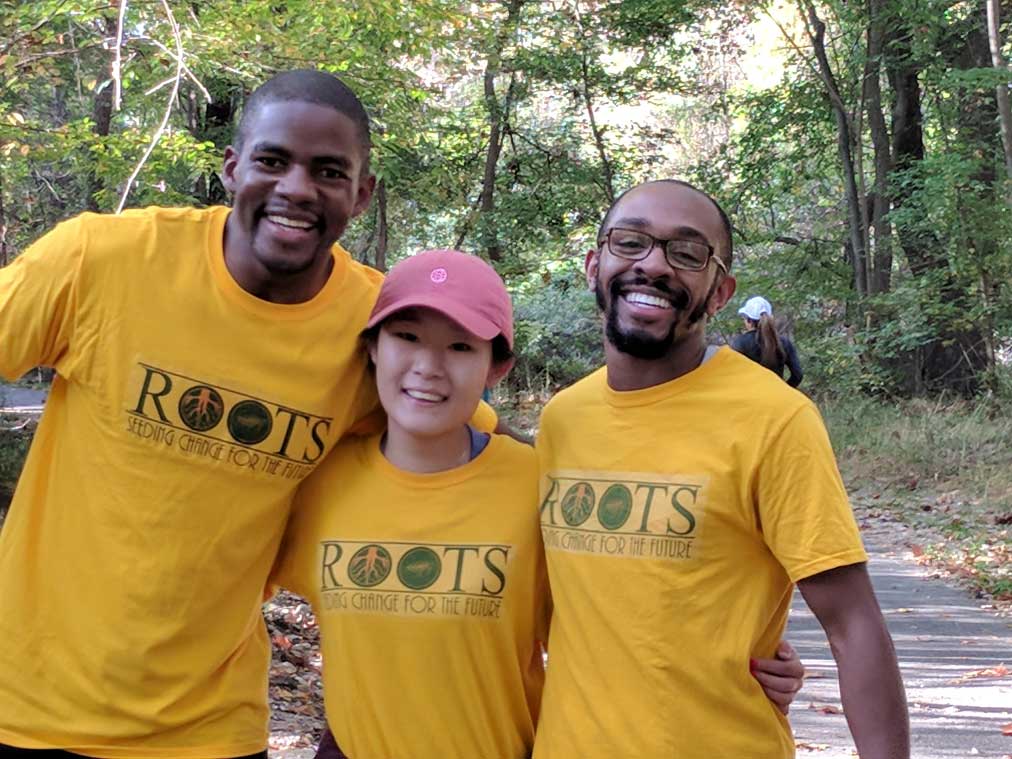 The Homecoming parkrun drew many newcomers among the 158 finishers at College Park parkrun, including Nebafabs Nwafor, Leyla Merlo, and Mandela Jones. 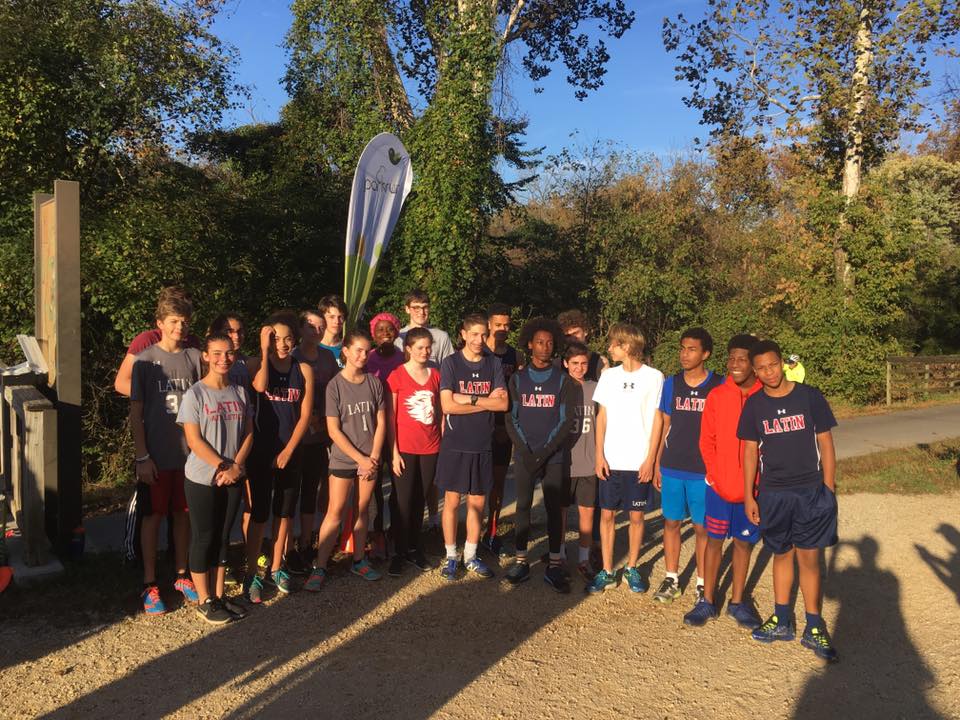 They also had a surge in newcomers this week at Fletcher’s Cove parkrun, where they welcomed a contingent from the Washington Latin School. First finisher Luke Tewalt covered the 5K in only 16:36. He’s 14 years old. 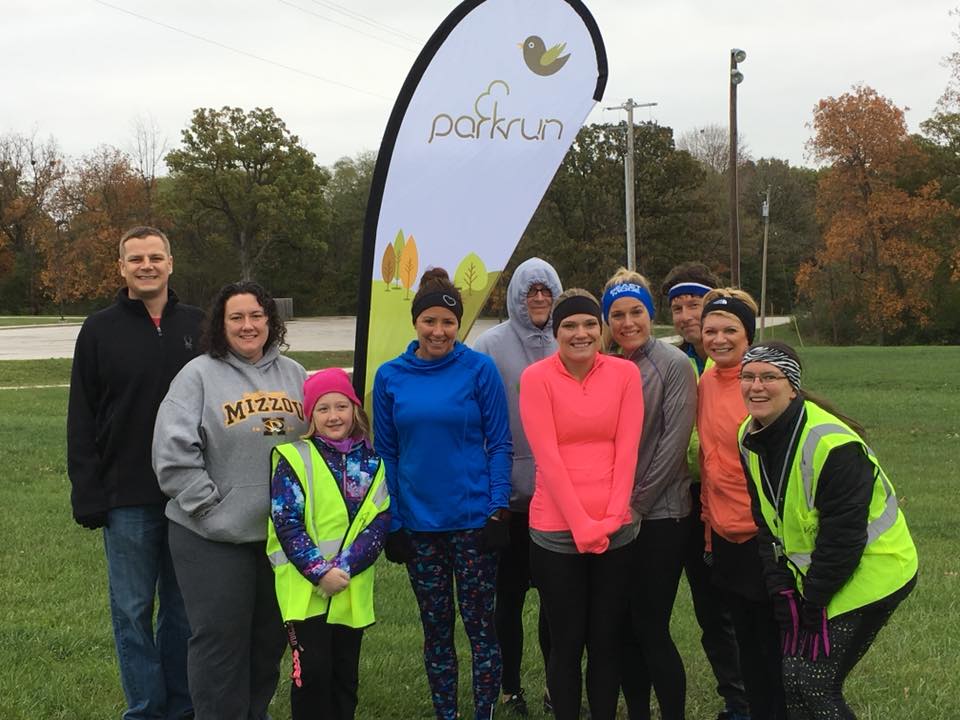 Over at Moberly parkrun in Missouri it was their inaugural run, so everybody was a first-timer.

Temperatures plummeted overnight, so the runners stuck together. 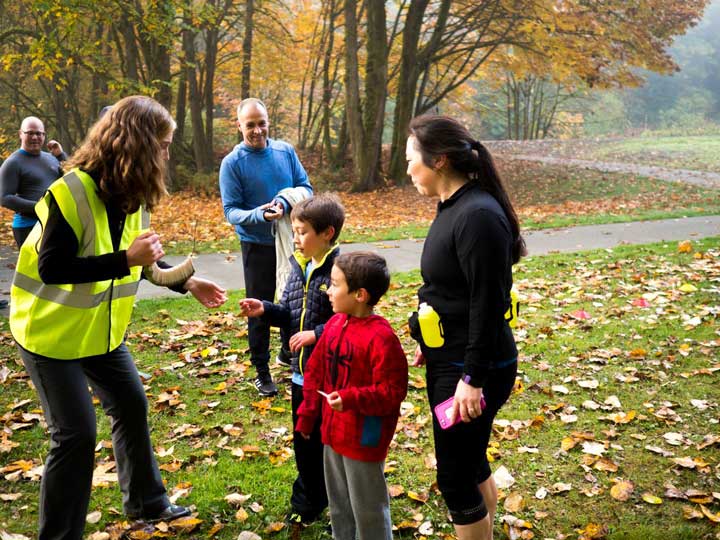 In the Seattle area, the Renton parkrun team got to do a dress rehearsal for their launch 3 weeks from now. They’re hoping for launch day on the Cedar River Trail will be as lovely as it was this week. 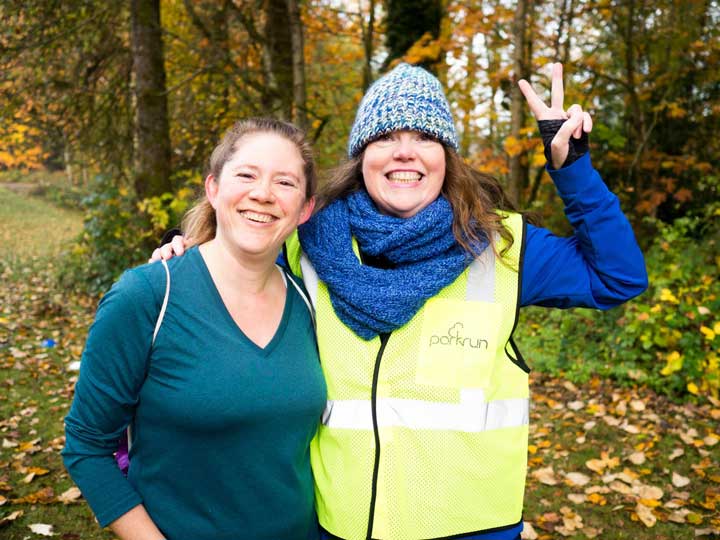 The Renton parkrun tailwalkers had a great time. 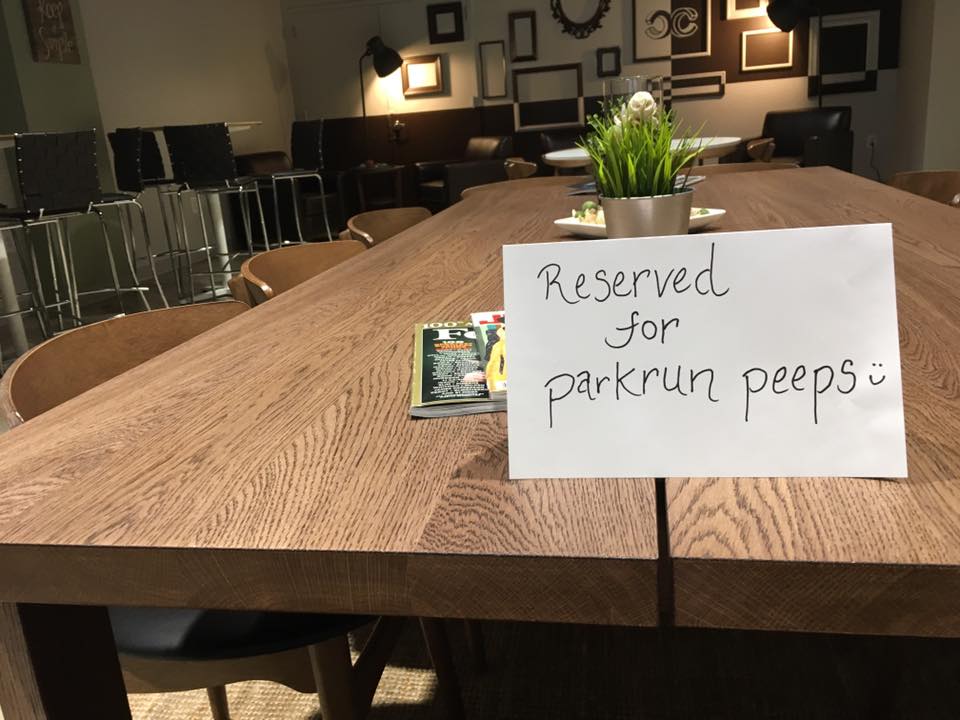 The Roosevelt Island parkrun team has clearly hit it off well with their new post-run coffee place. 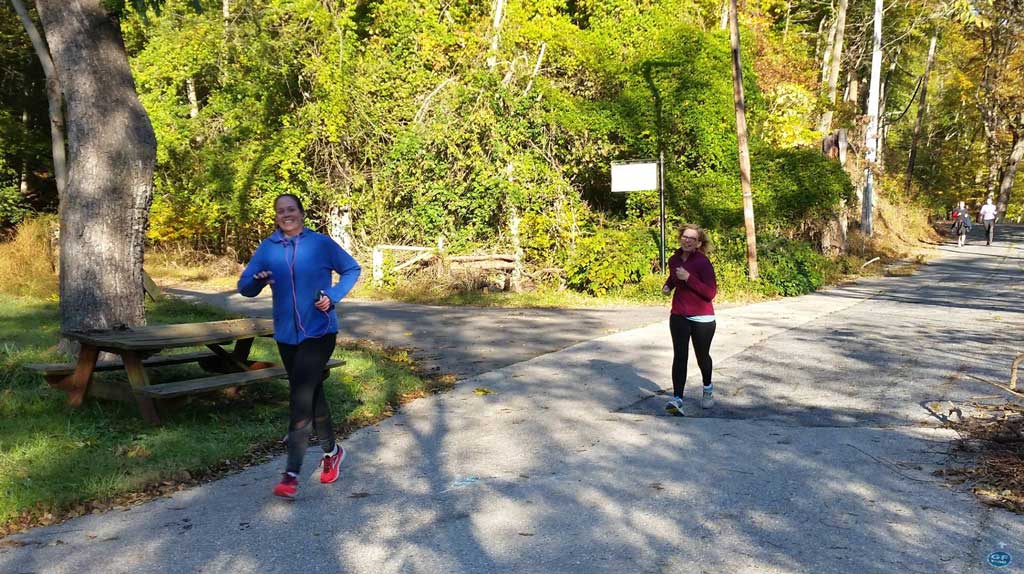 The launch of Moberly parkrun meant that Leakin Park parkrun is no longer the newest US parkrun. They are only on their 19th event, but Stacy Poliseo and Robin DeStefano have already taken part 20 times between them. 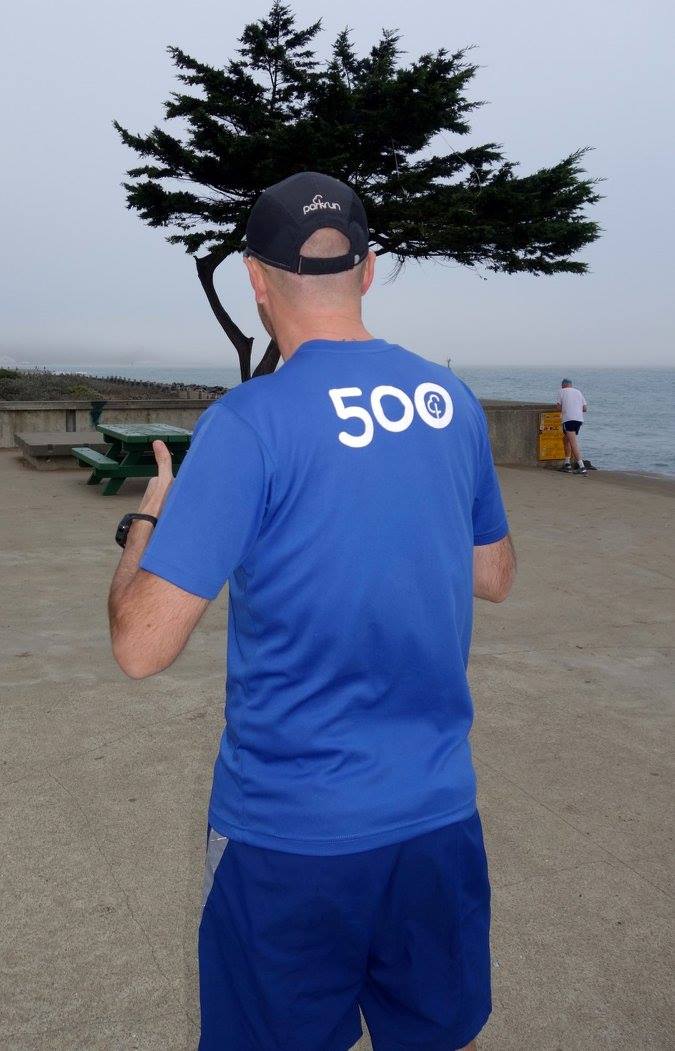 Meanwhile, back at Crissy Field parkrun we got only the second sighting on these shores of a parkrun 500 milestone shirt, worn by pioneering parkrunner Danny Norman.

That’s a lot of Saturdays. 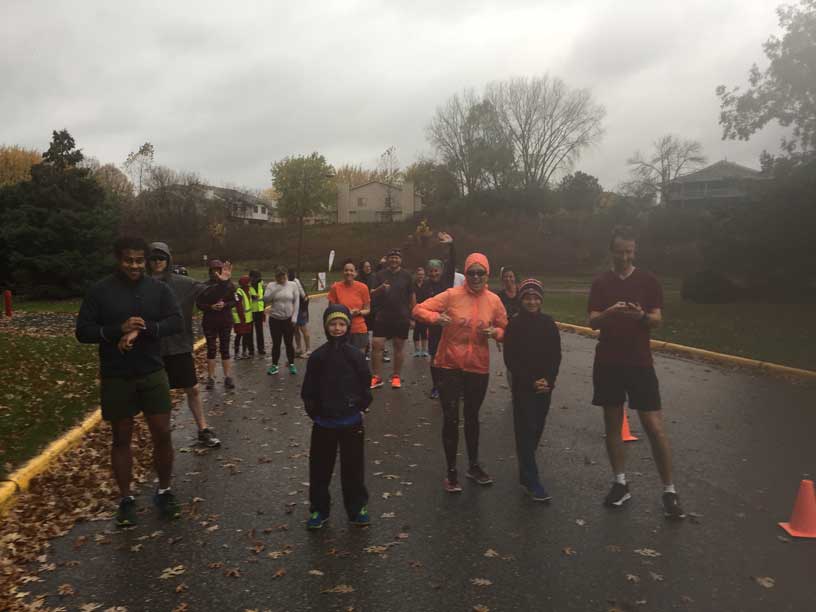 This was last week at Eagan parkrun in Minnesota. The skies opened as the run was starting. No problem.

This week there was snow and sub-freezing temps. Still no problem. 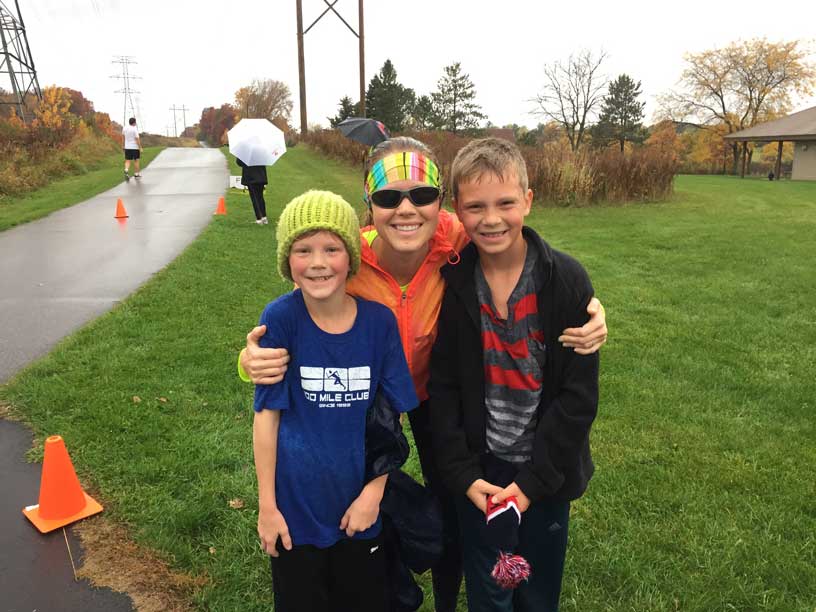 Despite the rain, the Dahlager boys had a great time. 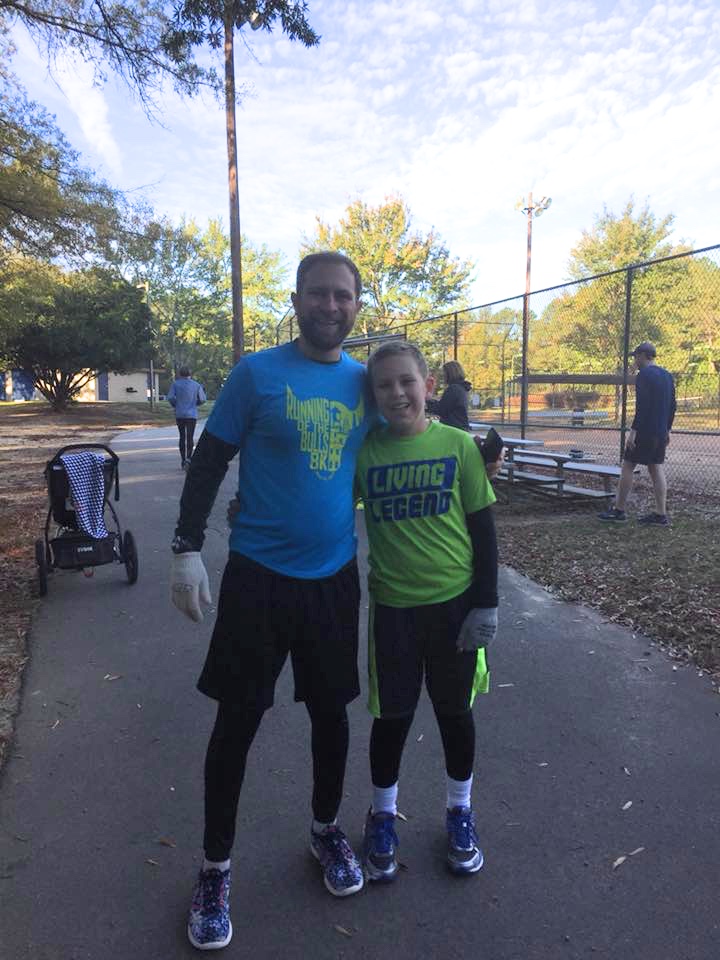 The parkrunners at Durham NC parkrun shared in the perfect fall running weather. 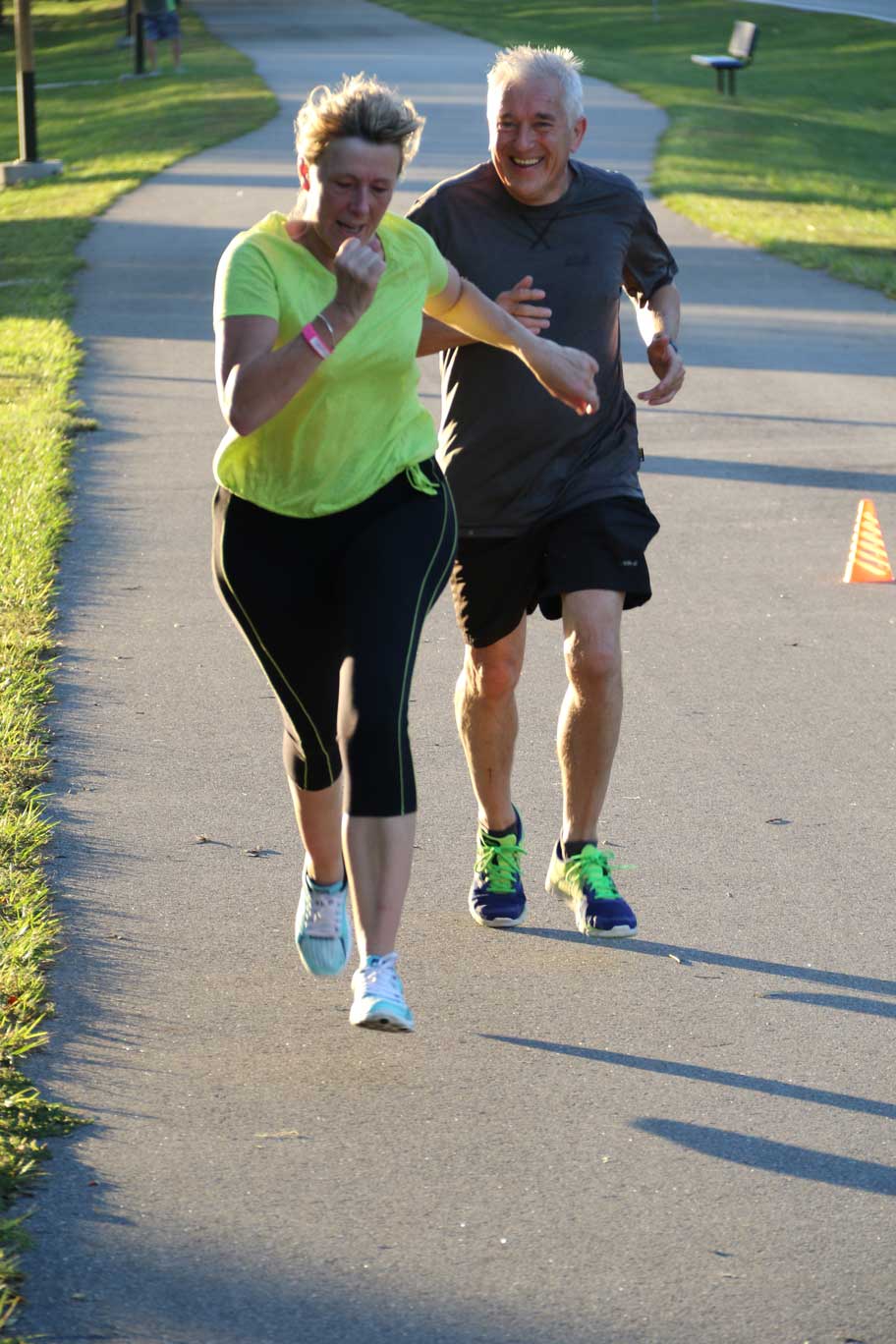 It’s a run not a race. Honest.

This was at Clermont Waterfront parkrun. Check out our new story about Clermont parkrun: A very warm welcome. It predicted that Clermont’s US parkrun attendance record would soon be challenged. How prophetic! 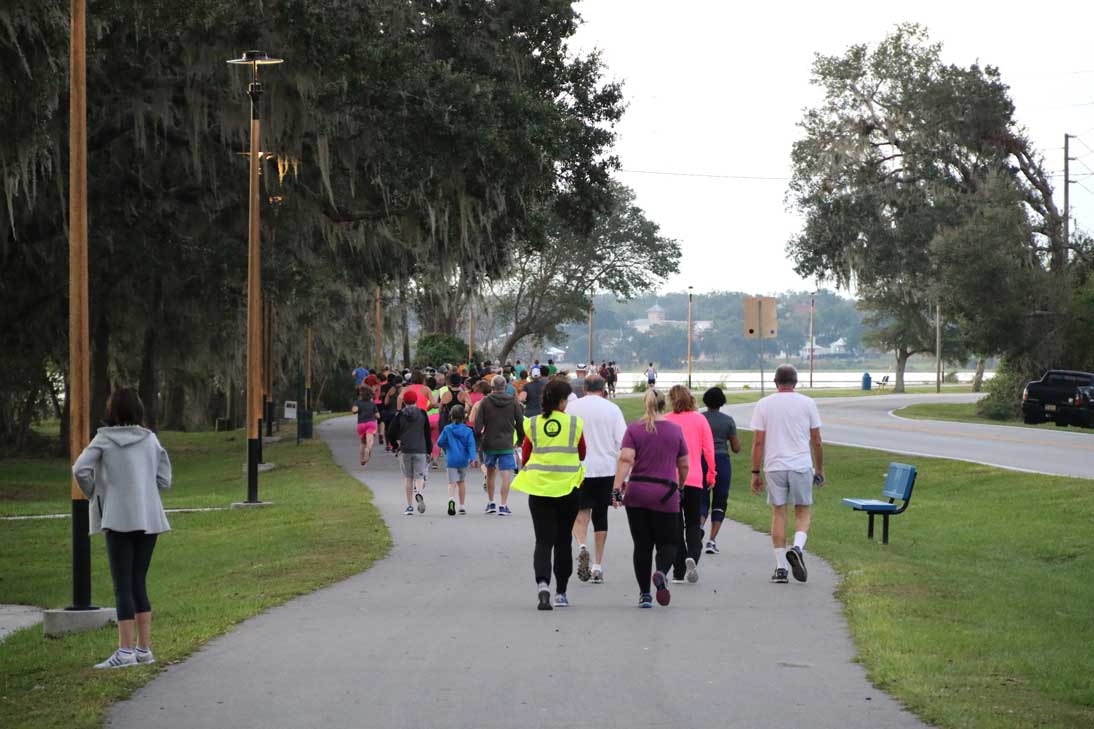 But with or without records, early Saturday morning is a great time to be running alongside a lake in Floida.