This week’s parkrun USA roundup is from our first weekend with 15 events from coast to coast. We feature lots of kids, new events, new courses, and visitors from near and far.

Next week: special Thanksgiving parkruns on Thursday in Clermont and Eagan. Almost all events go ahead as usual on Saturday. 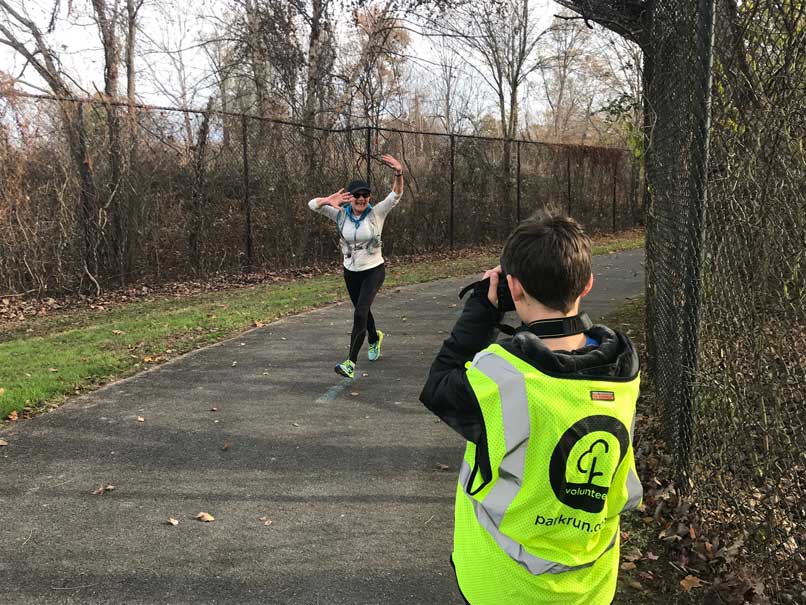 At College Park parkrun it was Kid Takeover Day. Almost all volunteer roles were taken by kids, and the grownups had a blast. 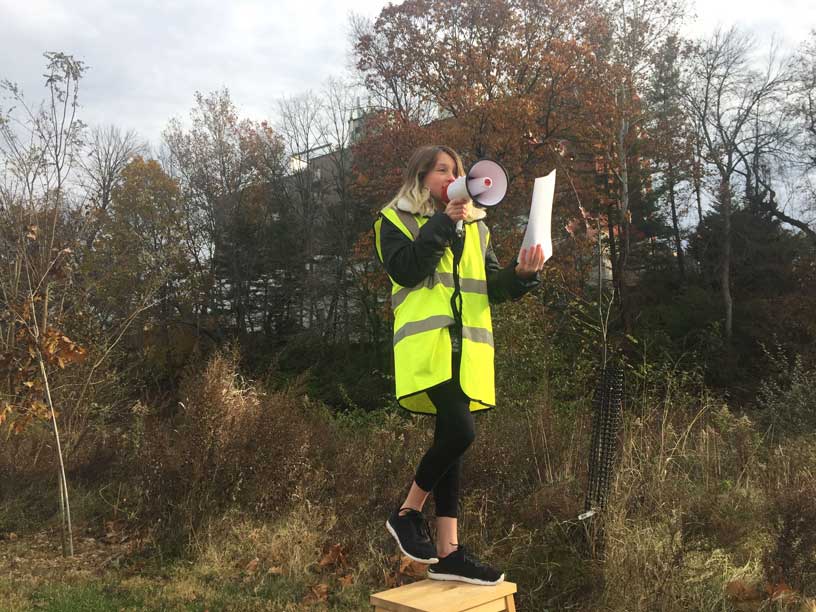 At College Park parkrun 11-year old Ginger was Run Director. She did a great job of giving the run briefing for a crowd of 100 adults. 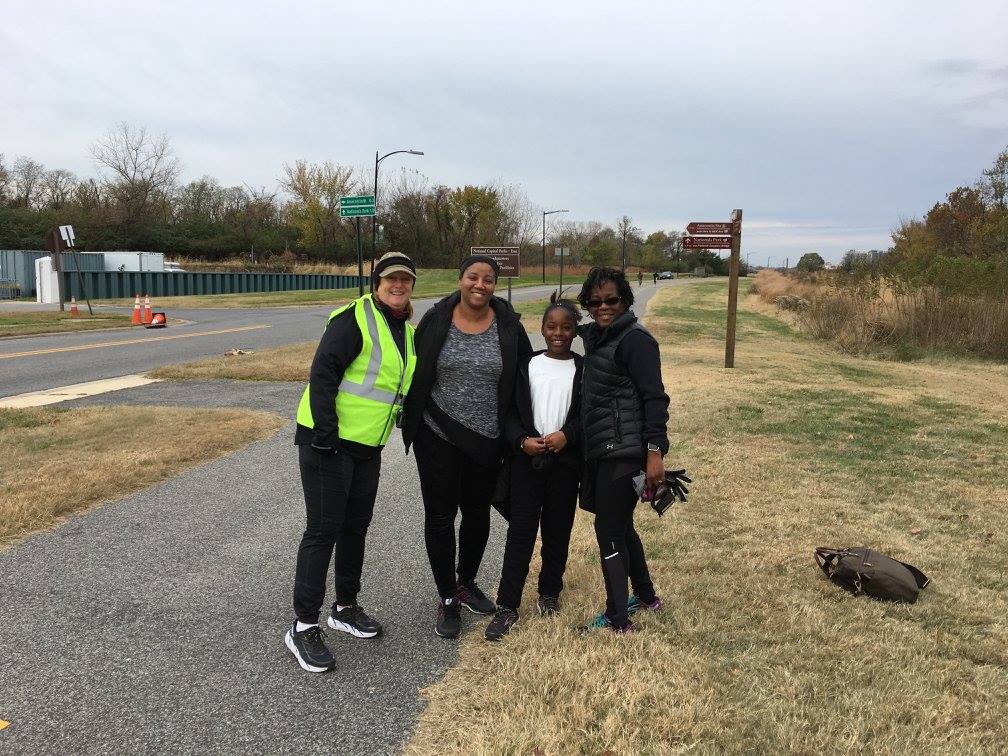 Young Kayla wore her white 10 parkrun milestone shirt to Anacostia parkrun, the third DC-area parkrun that she has tried. 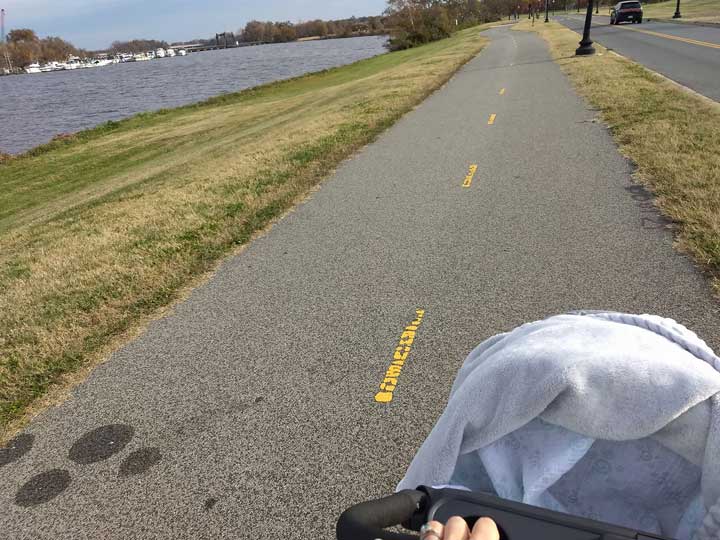 Henry is only 2 months old and Anacostia parkrun is already the third different parkrun USA event where he has been the tailwalker. At least his mom Stephanie enjoyed the riverside views. 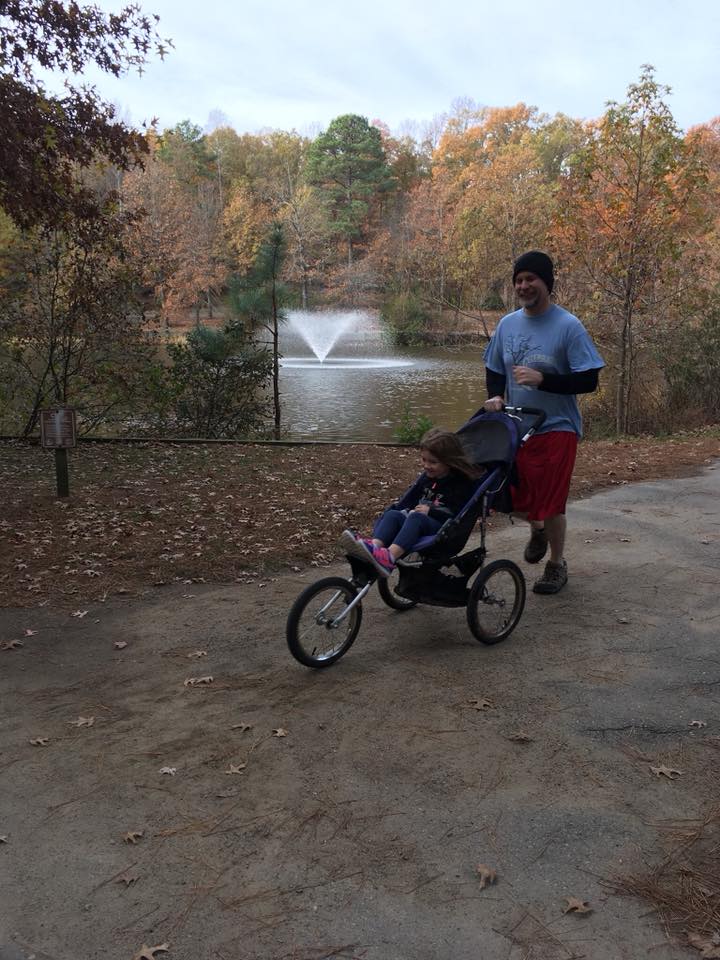 This might look like easy lakeside parkrunning, but we have the utmost respect for anybody who runs a stroller up the hill at Deep Run parkrun. 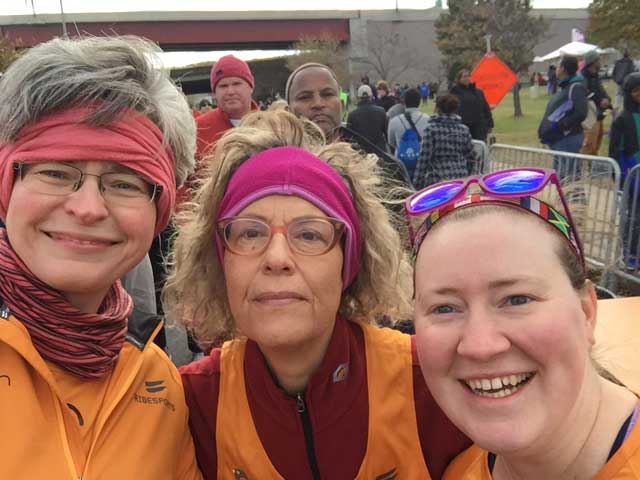 This was the route of Anacostia parkrun on Sunday morning, where Andrea, Jan, and Joyce joined hundreds in the DC Girls on the Run 5K finale, and spread the word about local area parkruns. 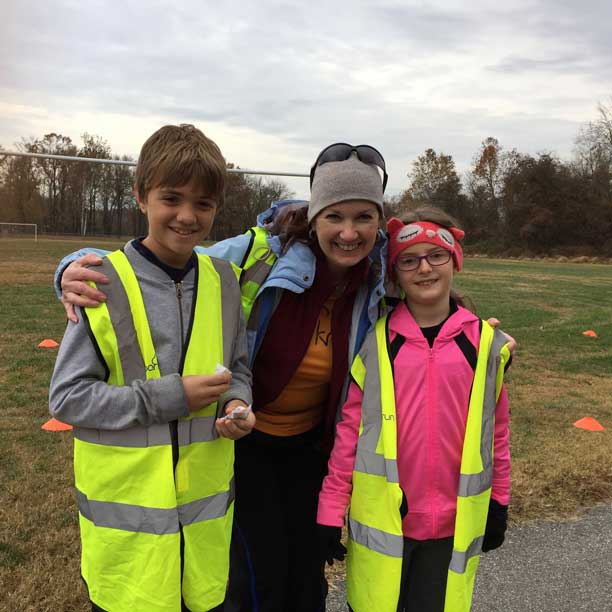 Back at College Park parkrun Lisa Wilson completed her 50th parkrun and 54th volunteering stint on only their 58th event. Marco and Violet were her course marshal understudies this week. 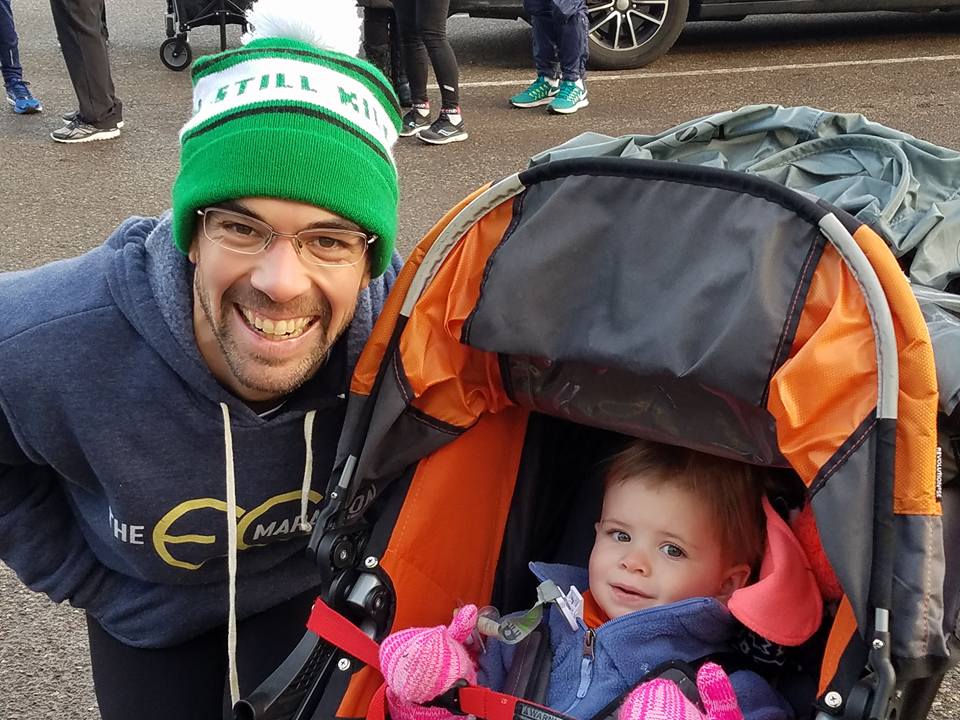 The snow had cleared at Eagan parkrun, so it was two thumbs up from this young parkrunner. 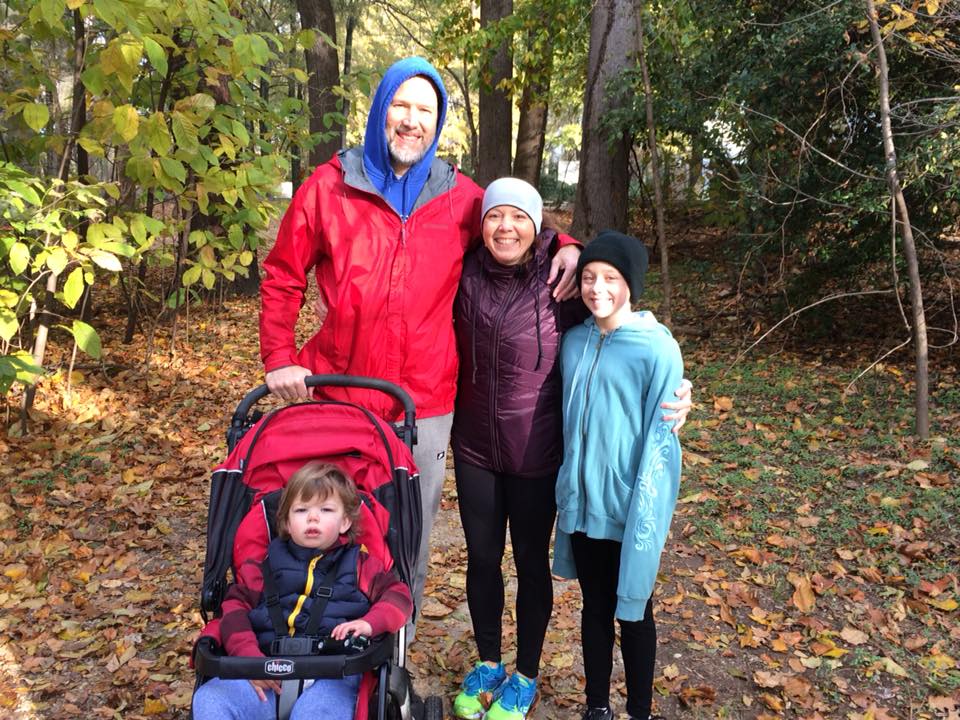 And it was a beautiful late Fall morning for a parkrun with the family at Roosevelt Island parkrun. 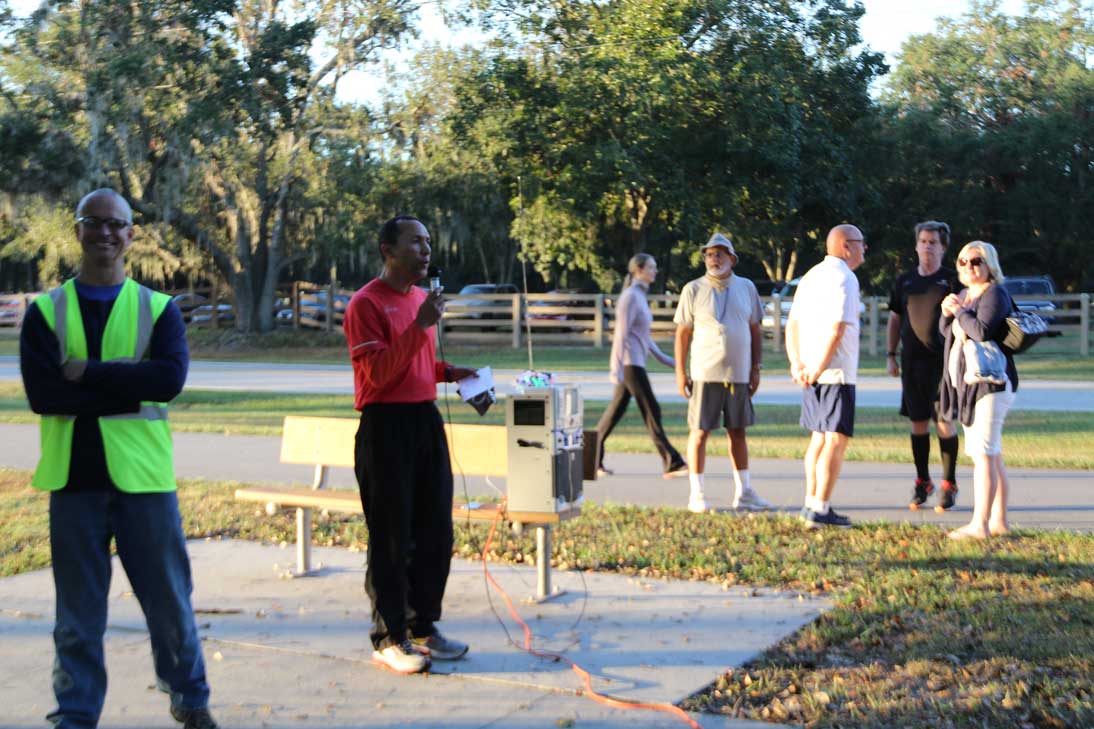 Normally Hector is the person behind the tens of thousands of great pictures from Clermont parkrun. 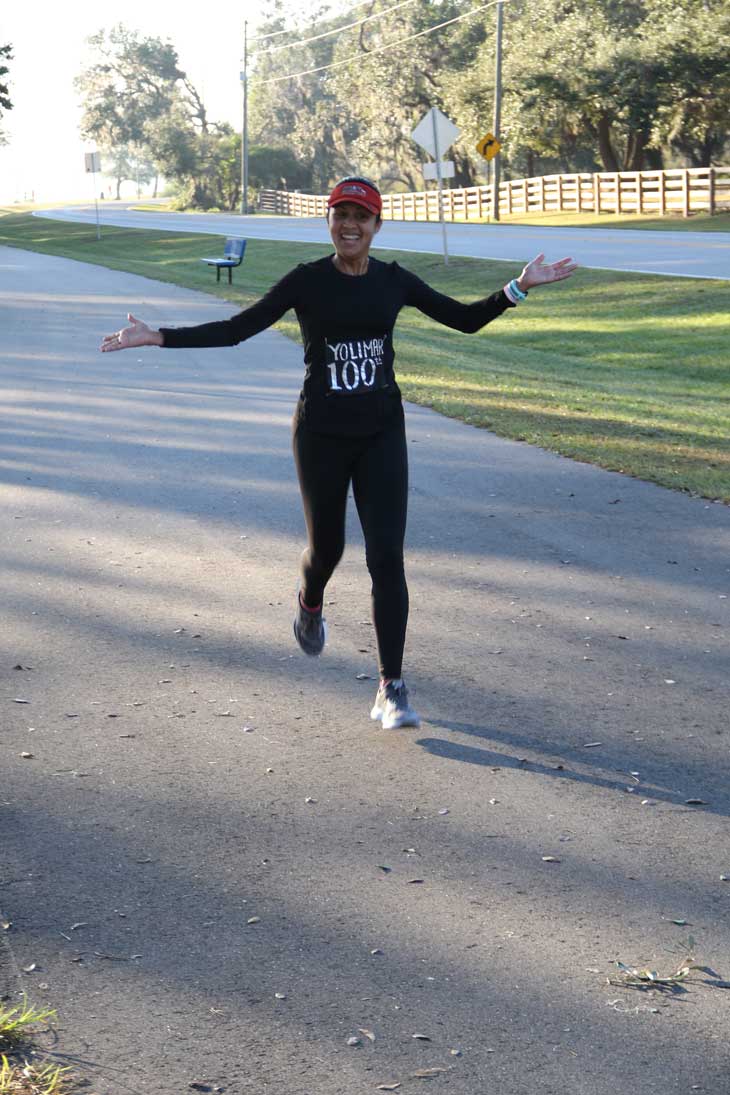 Also at Clermont parkrun they celebrated Yolimar Bolivar’s 100th parkrun.Yolimar has done all 100 of her parkruns at Clermont. 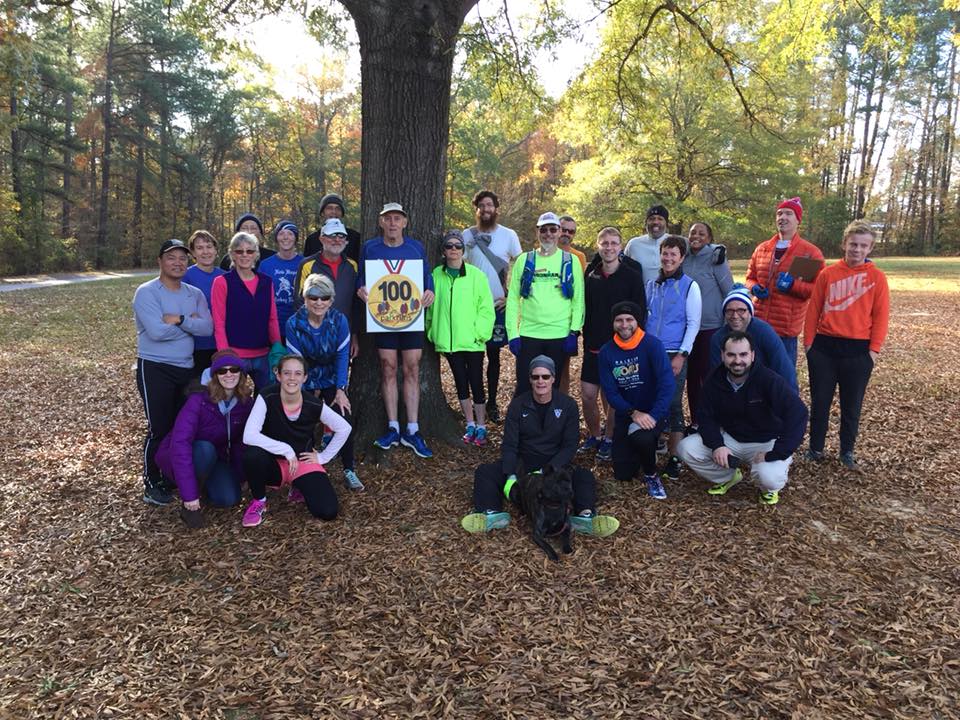 At Durham, NC parkrun they celebrated David Cromer’s 100th parkrun. David is going strong at 71 years old. He has missed only 7 parkrun Saturdays in the past year. Impressive. 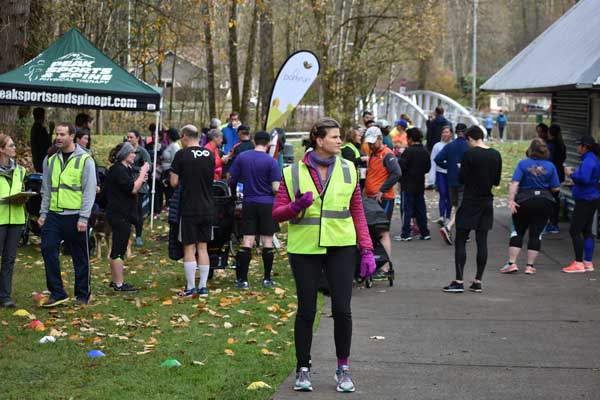 3000 miles away a big crowd turned out for the launch of Renton parkrun, the 15th parkrun USA event and the first in the Pacific Northwest. 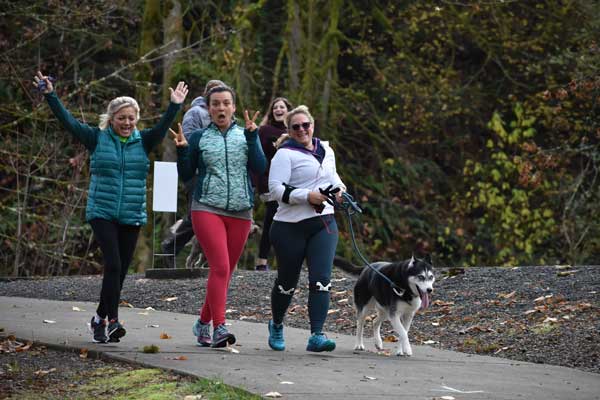 With the launch of Renton parkrun there are now 18 million Americans who live within 20 miles of a parkrun. Just a couple of hundred million to go. 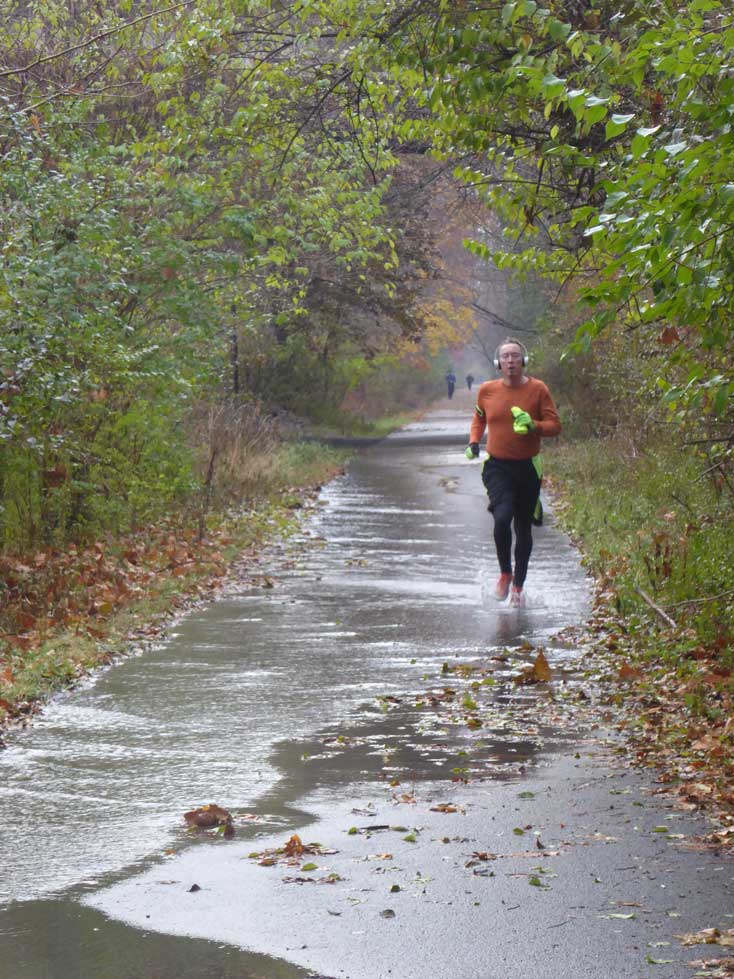 The torrential rains briefly abated for Mansfield OH parkrun, but there were still plenty of opportunities to get wet. 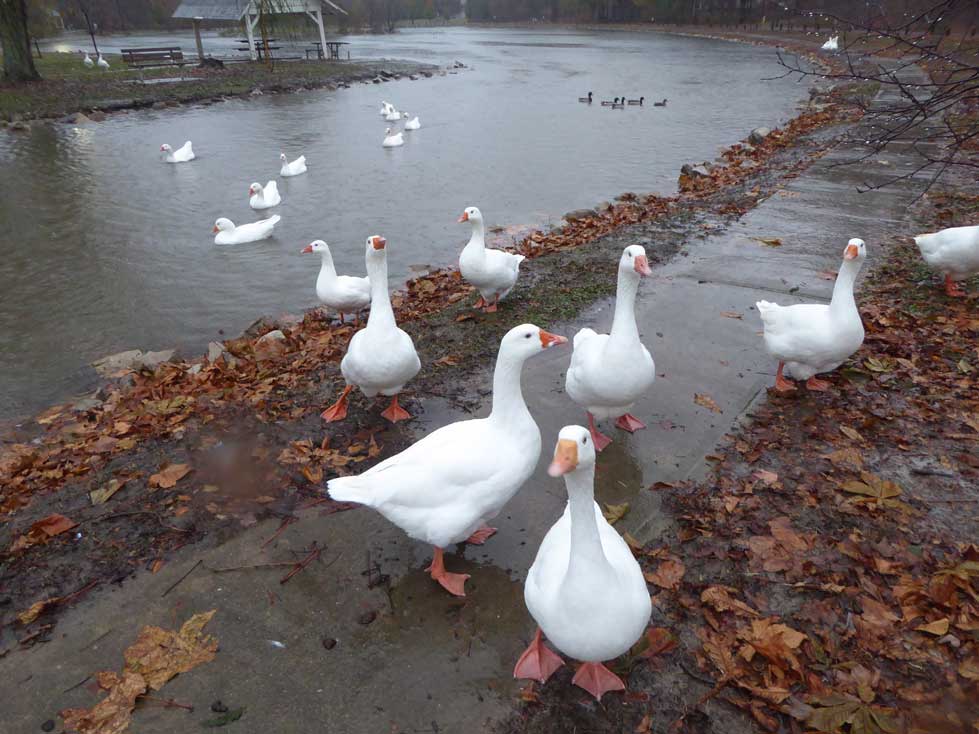 The geese at Mansfield OH parkrun were pretty happy about the weather. 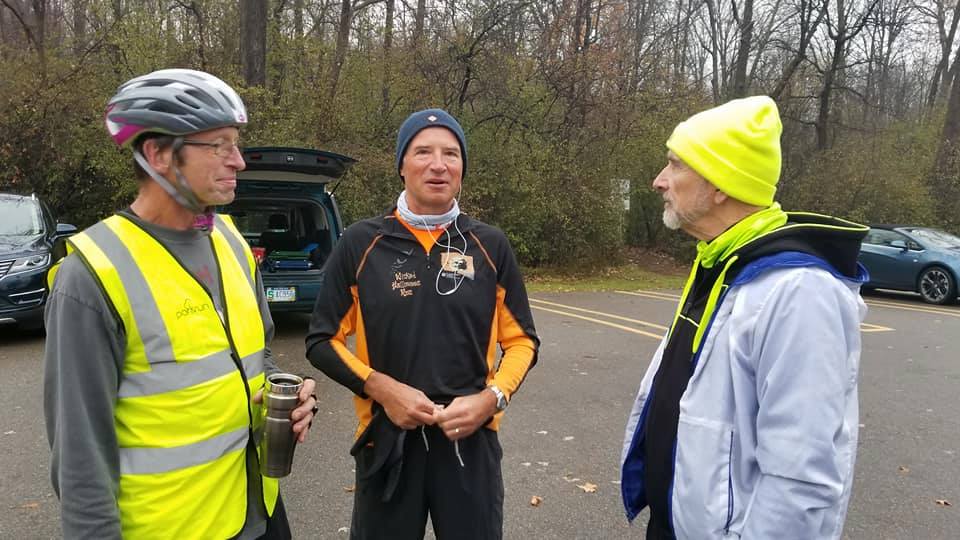 The same weather that flooded parts of the Mansfield OH parkrun course created much deeper water hazards at Livonia parkrun. So Event Director Lynn Boven quickly designed an emergency workaround, and guided the parkrunners on his bike. 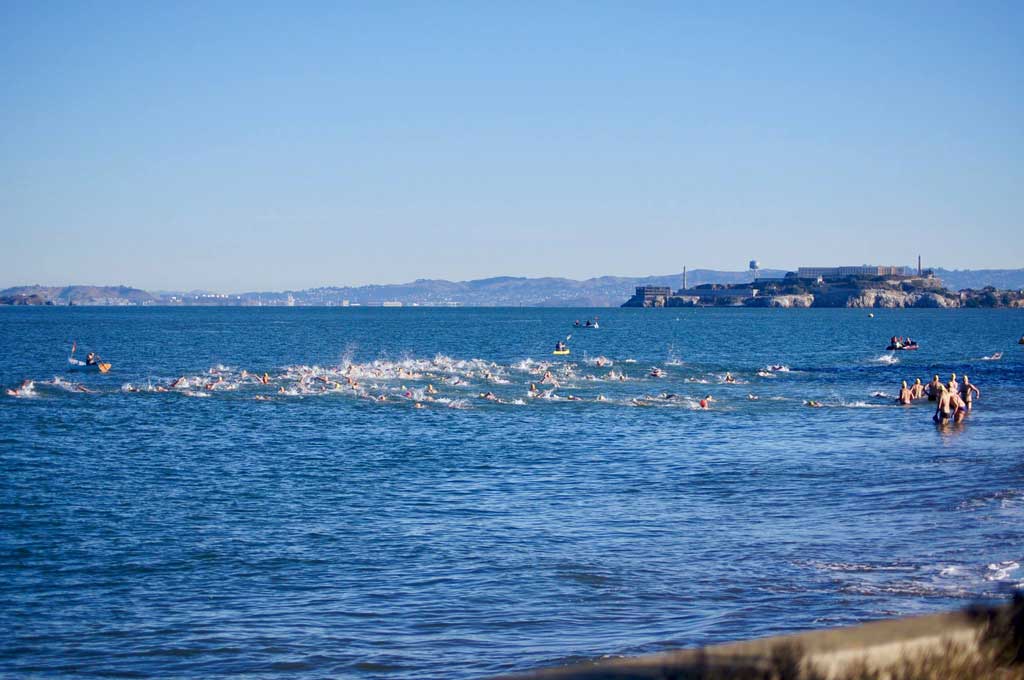 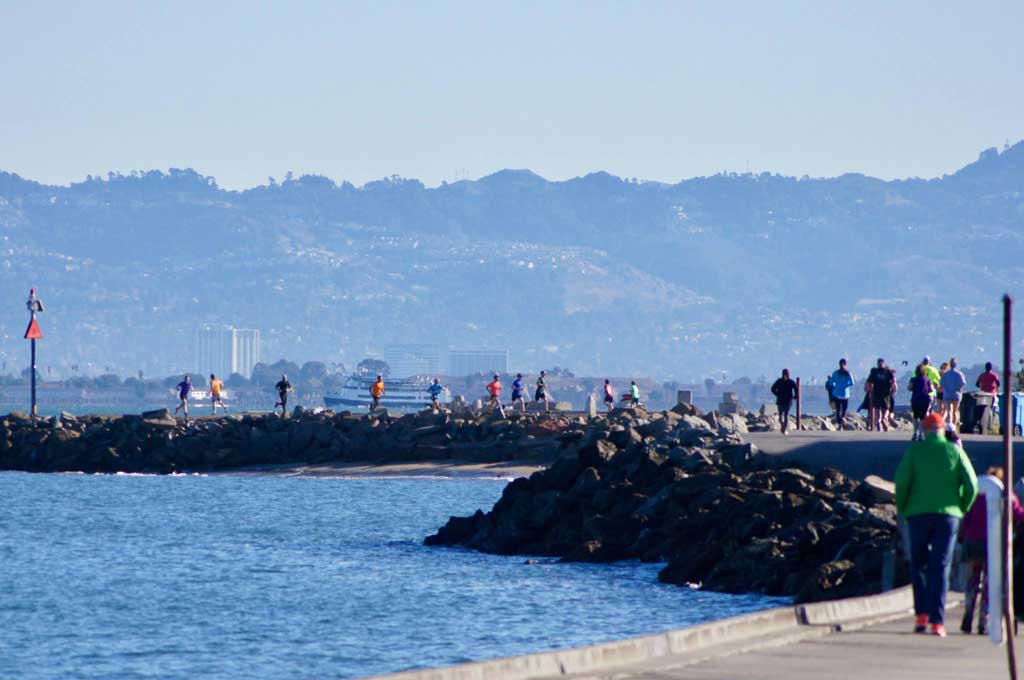 The team at Crissy Field parkrun promised that the route diversion would make for great photo ops, and they did not disappoint. 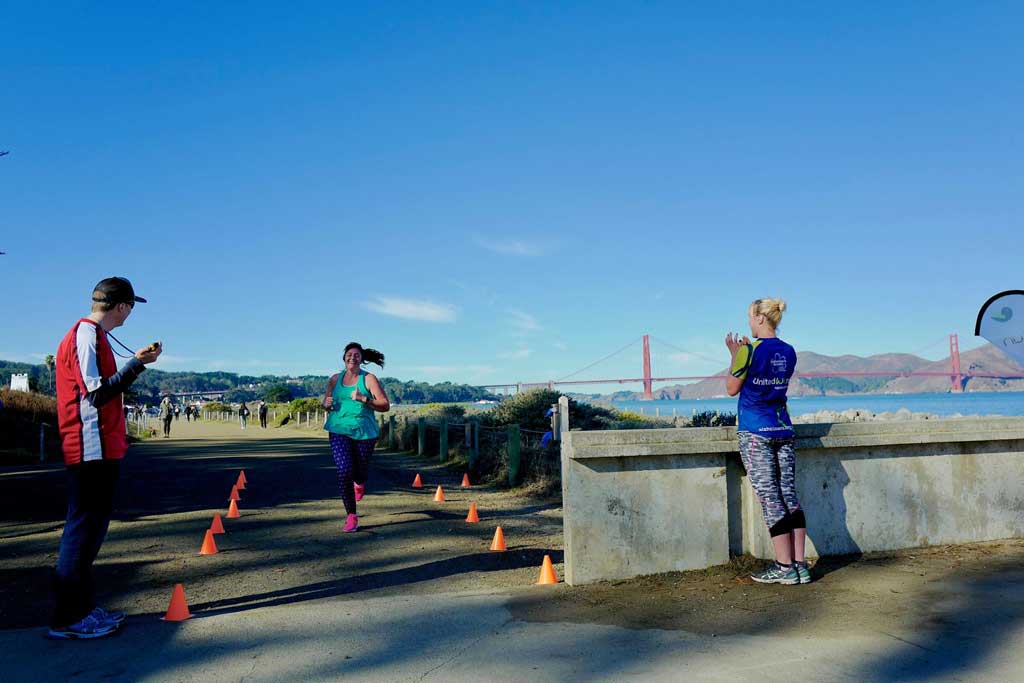 What a way to start off your Saturday. At Crissy Field parkrun. 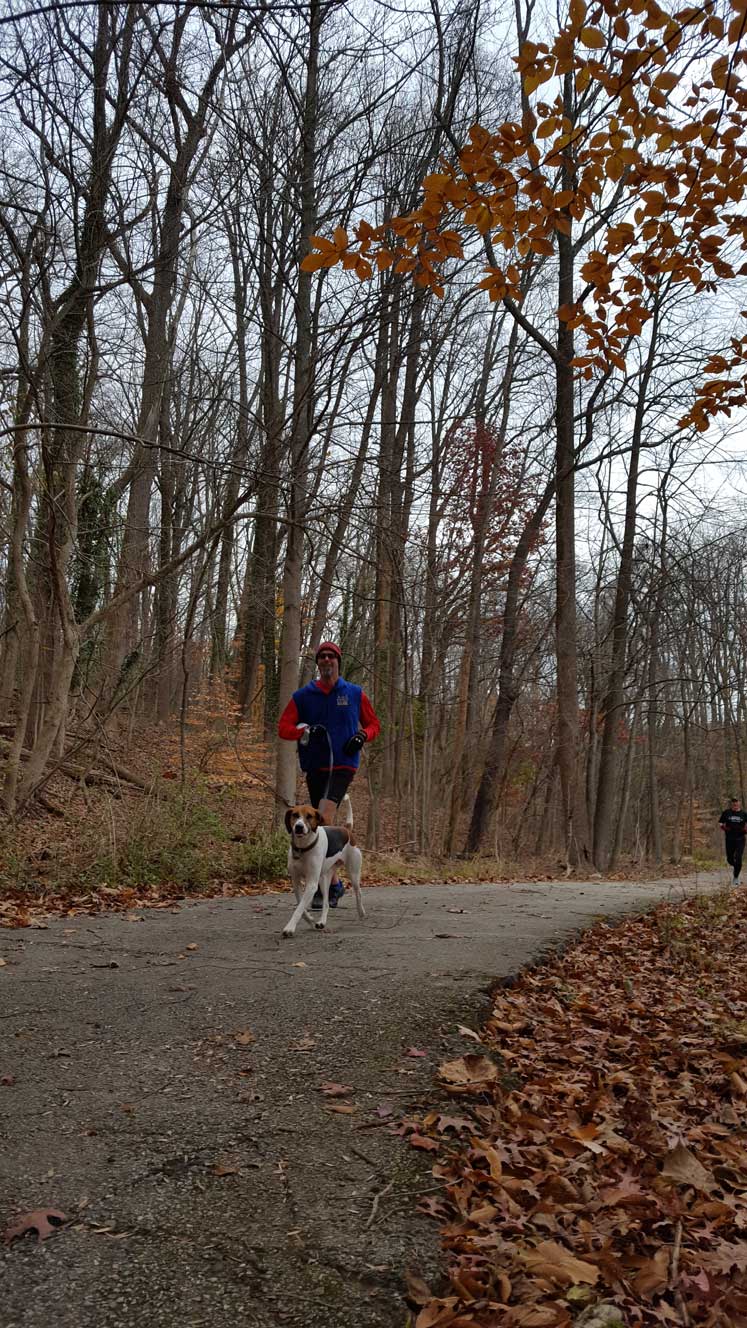 The trees are mostly bare now at Leakin Park parkrun, but it’s still a beautiful place to run with a friend. 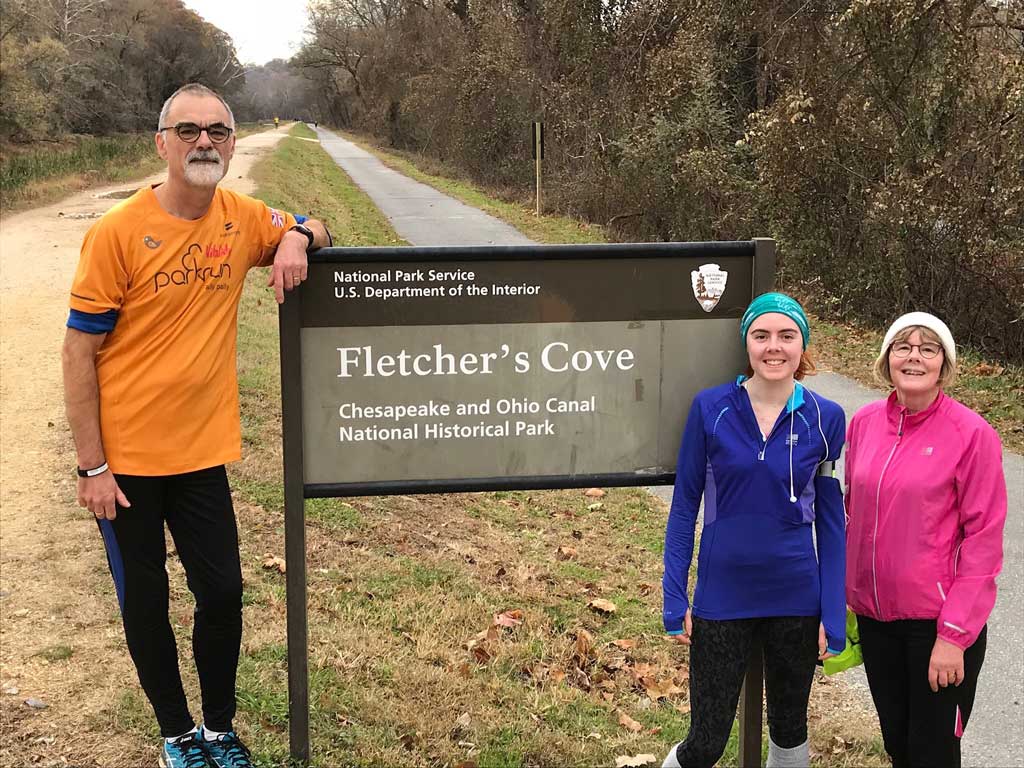 “Being in Washington there was really only one parkrun we could do! Thank you @Fletcherparkrun for the warm and friendly welcome.”

Well, for most of us Washington DC is the one US city where you’re spoiled for choice. But if you’re parkrun tourists Jessica, Tim, and Caroline Fletcher, then Fletcher’s Cove parkrun really is the only viable option. 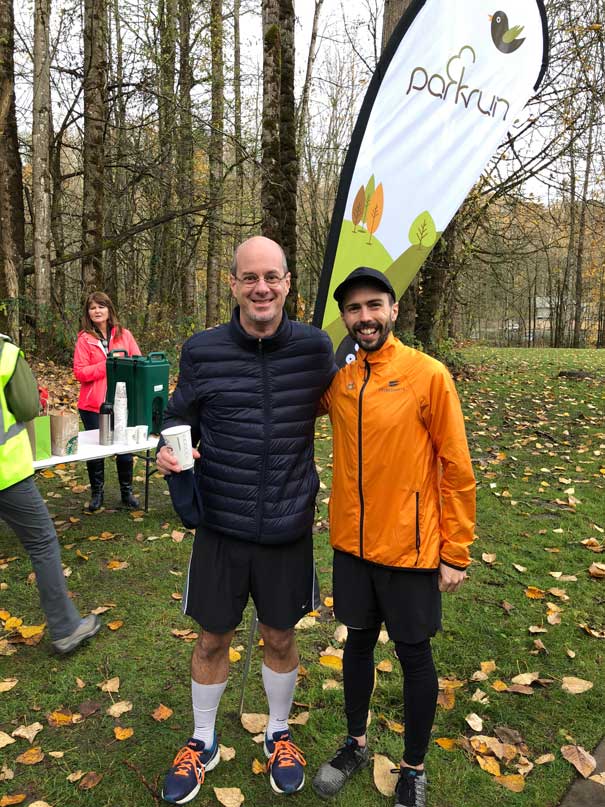 These days the international parkrun tourists are not all from overseas. At Renton parkrun they were pleased to welcome Euan Bowman, Country Manager for parkrun Canada.

Euan did not have to travel very far for his first parkrun USA run. Much less far than Andres Falconer, event director at Fletcher’s Cove parkrun in the “other” Washington, who traveled a couple of thousand miles to be there.