A parkrun and a wedding

Shortly after launching Renton parkrun in November 2017, the event team welcomed an energetic and passionate parkrun couple to the local family: Rebecca Adams and Ben Oxwell. The two had been dating long-distance between the US and Australia for 15 months but were happy to share that they intended to get married mid-2018 when Ben’s marriage visa was approved. “Why not get married at parkrun?” asked Renton co-Event Director Kortney Thoma. This past Saturday, the couple came to parkrun and said “I do.”

To understand why Ben and Becca agreed to get married at parkrun, you need to know how central running is to their story. 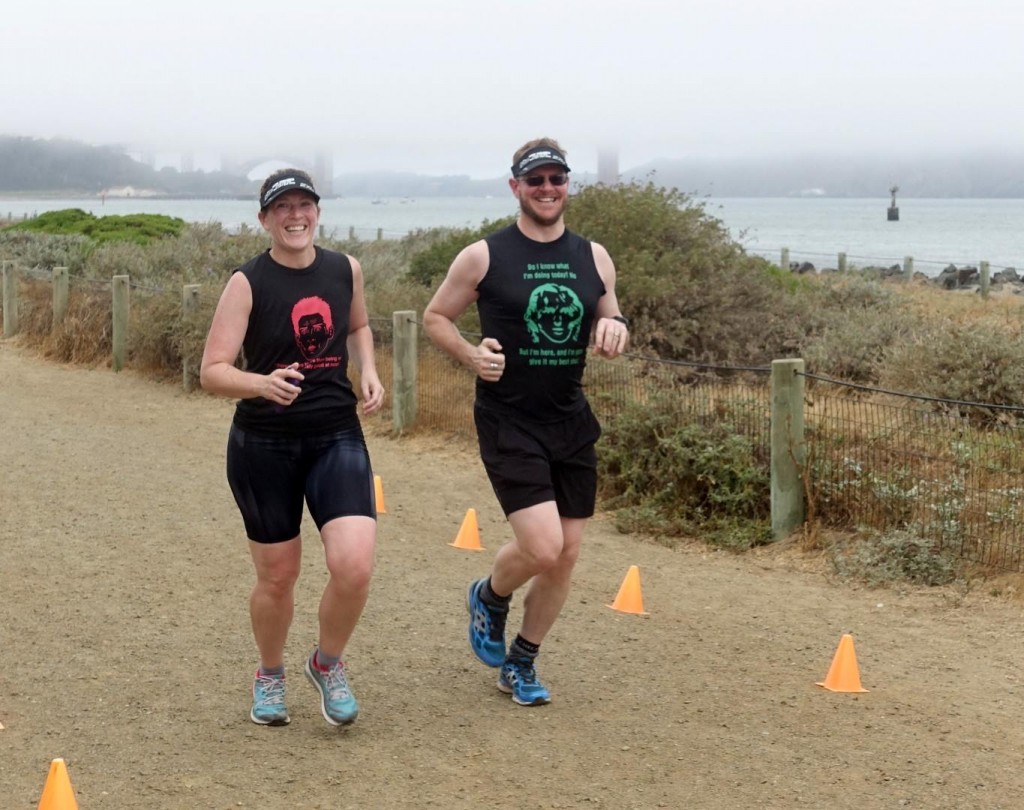 Ben shares his story of how they met: “Becca and I met through an ultrarunning group on Facebook. Becca made a post asking for advice on how to train for a 50k while being a single mum and only being able to do long runs every second weekend. We ended up chatting on messenger, and eventually moved to calls and video chats, with me planning to visit Becca and pace her race: the Cle Elum Ridge 50K.”

Rebecca was first introduced to parkrun at Pioneer parkrun while visiting Ben in Perth, Australia (Ben’s home event). Ben has been a regular on scene at Pioneer since 2014 where he’s completed 122 of his 161 runs and several stints as Run Director.

“I first learned about parkrun when I saw an article online about it while I was building up through a Couch to 5K program. I went along to Canning River parkrun with no idea what I was doing and met some extremely cool and friendly people,” recalls Ben. “A few weeks later I returned for my second parkrun (work had prevented me returning earlier) where I found that I was welcomed like an old friend, and from then it became a regular event for me. I ‘moved’ parkruns when Pioneer started as it was closer to home, and I became part of the event team.”

“If it wasn’t for parkrun and the amazing group of friends I made through it, I doubt I would have ever gone past running 5k,” Ben continued. “I definitely wouldn’t have had the confidence to go up to Ultra distances, and have the confidence to pace/accompany someone through a 50k race. So naturally when Becca visited, I wanted her to meet as many of these wonderful people as possible. Unfortunately Becca did have an injury requiring her to wear a moonboot. This didn’t stop her completing the course though, and I feel that she found out just how wonderful and supportive the parkrun family is at that event.” 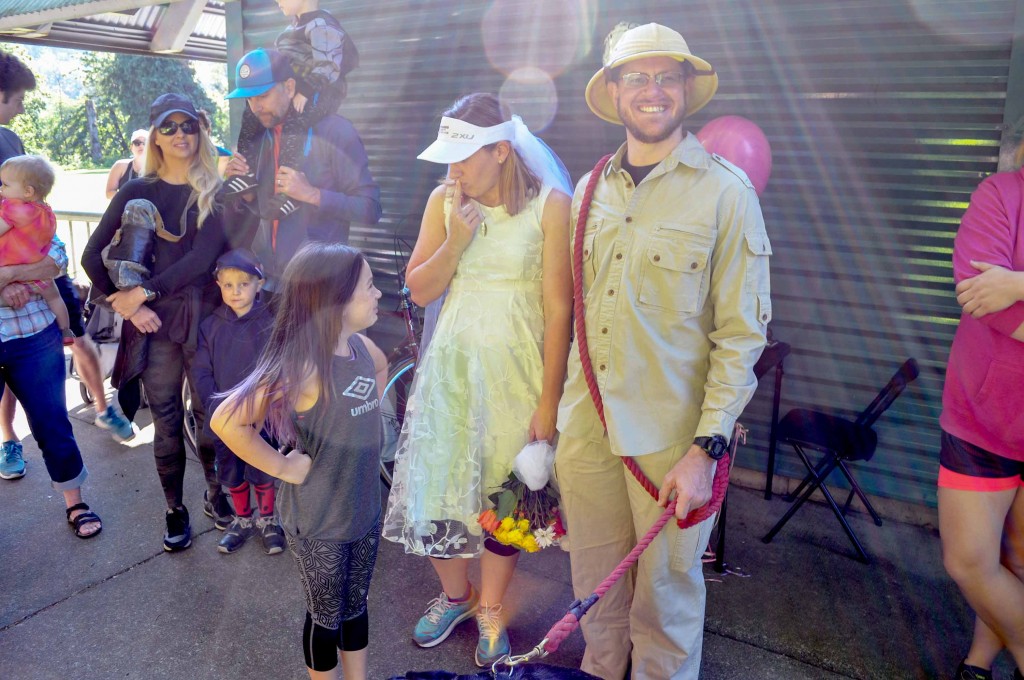 Now acquainted with parkrun, it was just a matter of time before Renton parkrun would launch near Becca’s home and she would have a local option to participate in.

“Ben and I heard about Renton parkrun from a friend of Ben’s in Perth who is an avid parkrunner. She heard about it before it launched and reminded us to go while Ben was in town visiting in December, so we did!” says Becca. “Becoming part of the Renton community has been wonderful. Everyone has been kind, welcoming, supportive, and definitely more like family than a weekly run/walk group. Everyone has been supportive of me attempting parkrun solo with two U11s for the past 6 months, taking the girls under their wing and allowing them to run with them when things got challenging for me. I have also valued the volunteering opportunity for the kids and how that has been welcomed and supported by everyone in the Renton parkrun family. It helps them see beyond themselves and give back to the community.” 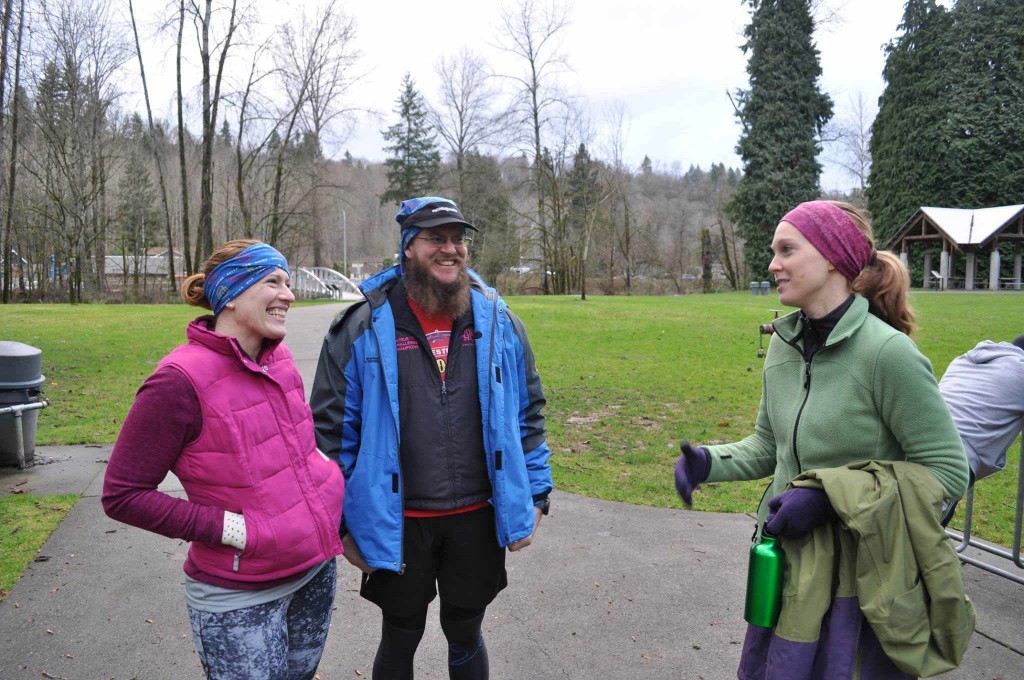 “I clearly remember meeting Ben and Rebecca at their first Renton parkrun event in December 2017,” says co-Event Director, Kortney. “I was still so new to being RD, had mixed up the barcode scanning order at the finish line, and I was starting to give our volunteer scanner the wrong directions! Ben was standing nearby and helped me and our volunteers sort out the correct order (always athlete before token). Becca and I of course became fast friends having both fallen in love with Aussie blokes and bonding over the woes of immigration.”

In just seven months, Becca and Ben went from strangers to core team members of the local Renton parkrun community and on June 13th, with the marriage visa approved and Ben’s flight to America booked, they set a wedding date. While the initial offer to host the wedding at parkrun might have been made as a bit of a joke, there was no longer any joking about it: these two were getting hitched and the most appropriate place to do it was with their running family! 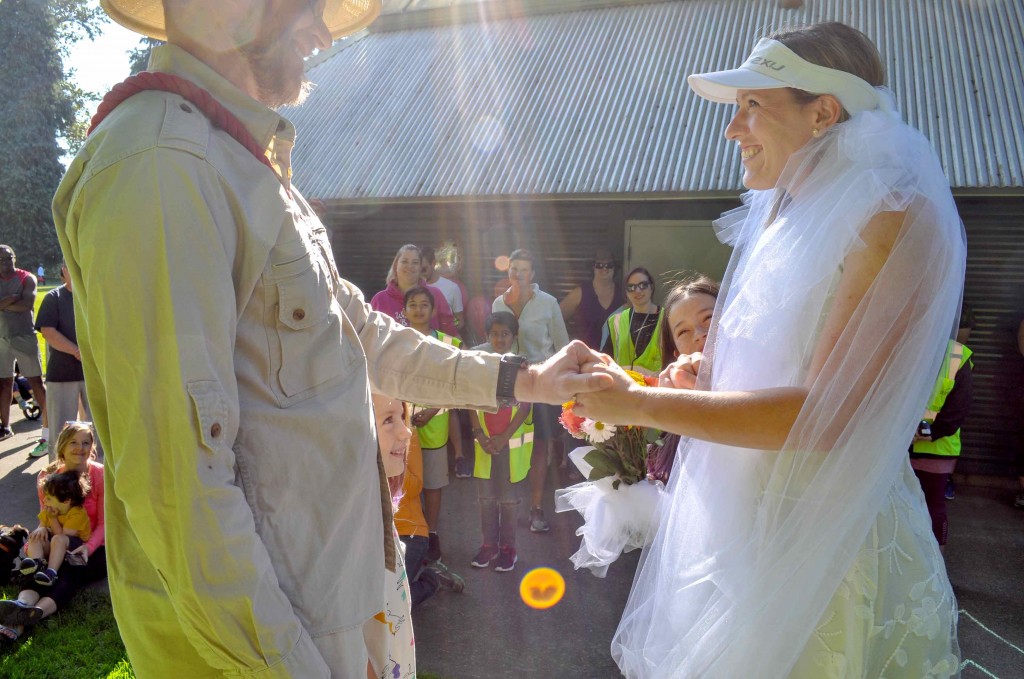 On July 21st, 2018, Ben Oxwell and Rebecca Adams tied the knot at the 37th event of Renton parkrun.

“The day went pretty well, the ceremony was wonderful, and we had so many friends show up to celebrate with us. The parkrun community was awesome as always,” says Ben. “I definitely felt welcomed by the Renton parkrun family; there’s something about parkrun where you feel welcomed at them all. I think it’s something to do with the people that parkrun attracts.”

Becca also felt loved and taken care of by her parkrun family. “I started a new job two months ago and we are two weeks out from our huge global event. I have been working 10-12 hour days and I was definitely stressed and overwhelmed before the wedding. Thank goodness for Ben! He was a lifesaver! The day of the wedding was way more relaxed. The girls were in a great mood and things went unusually smoothly as we headed out the door for parkrun. I felt excited and walked into a true sense of family and warmth at parkrun. It was so much fun to have family and friends from inside and outside of the parkrun community join us in celebration. I felt surrounded by love and joy, supported on this big occasion.” 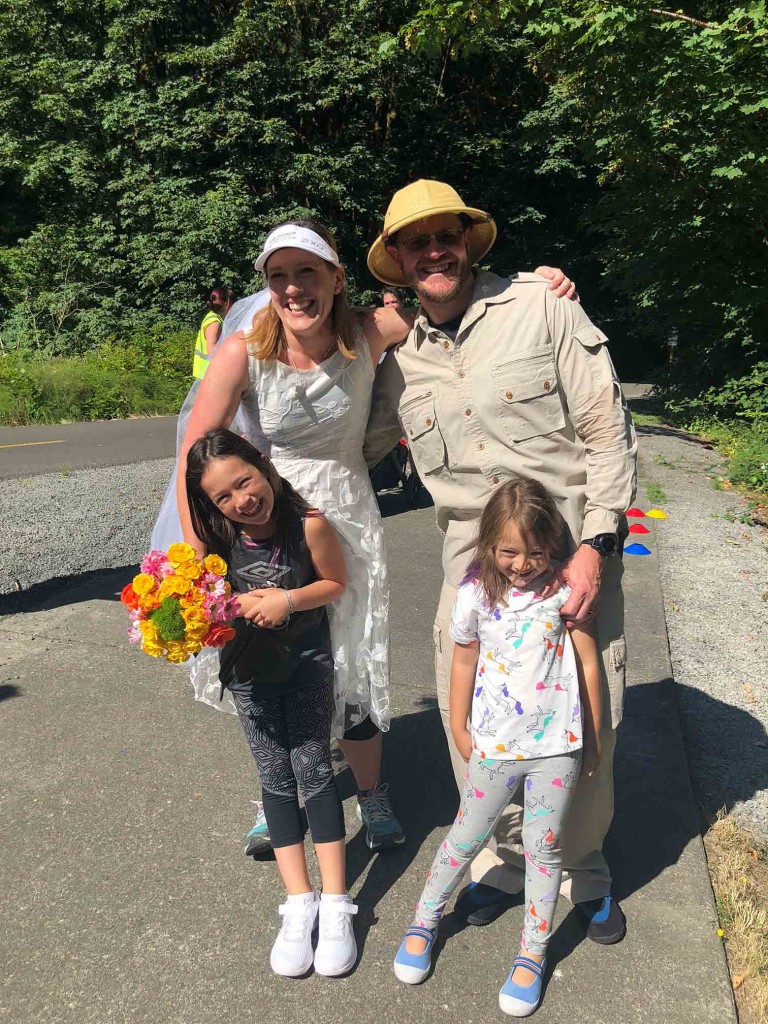 Rebecca’s two daughters, Kesha and Kalah, helped on the day and were assisted by Mya, Ben’s dog. There were 38 runners and walkers in attendance, 11 volunteers, and 15+ observers who were there just for the wedding. 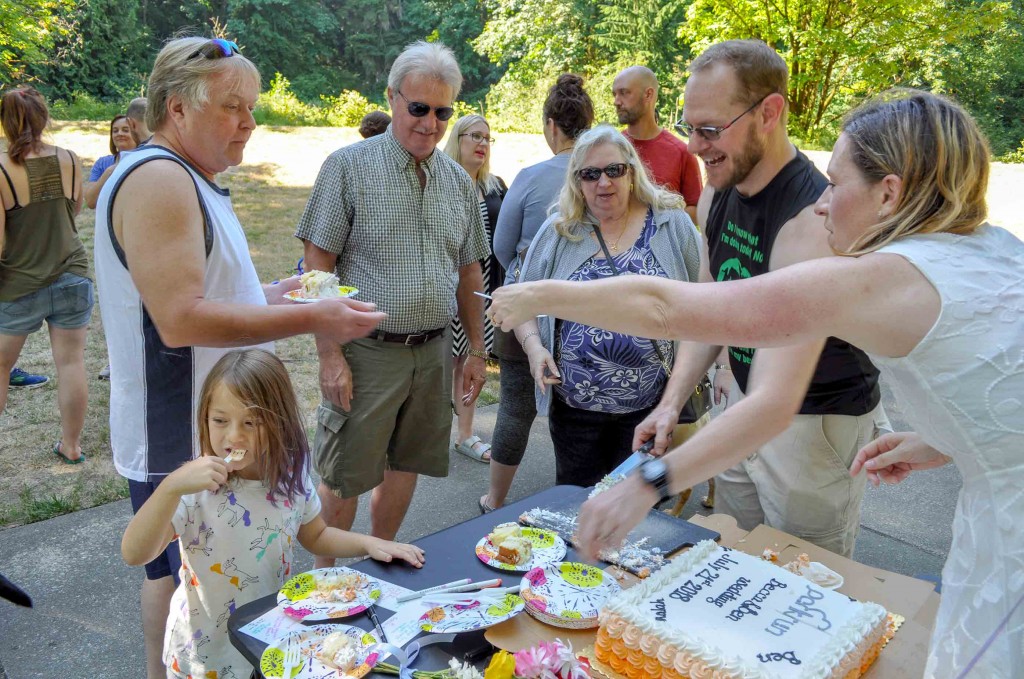 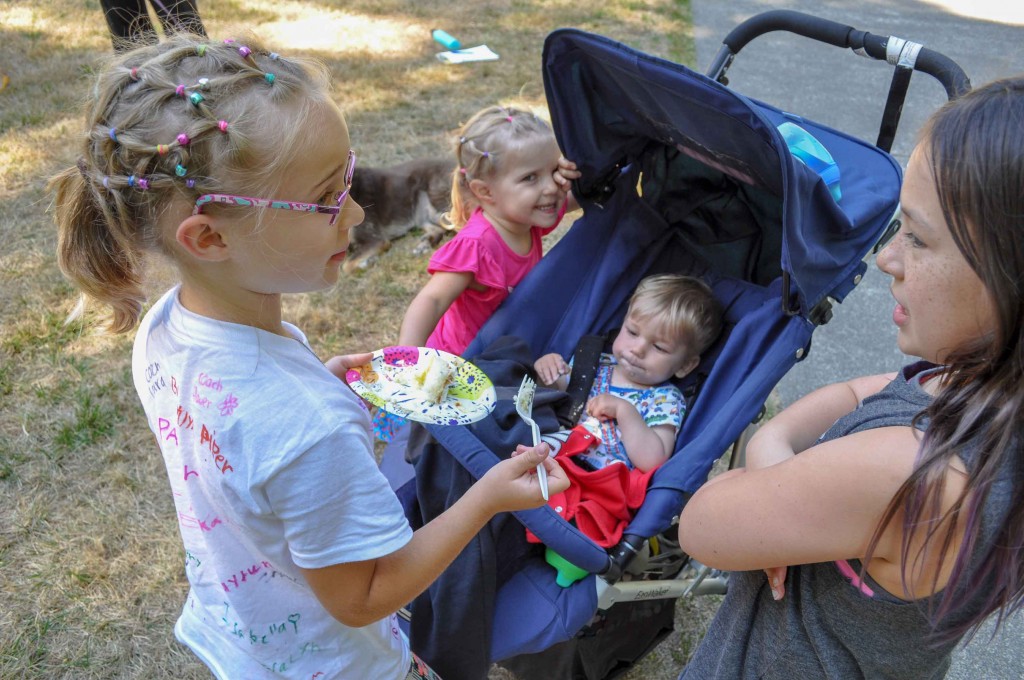 News about the parkrun wedding spread fast in the one week between announcement and nuptials, with parkrunners across the world tuning in to watch the Facebook live video and send the couple their happy wishes. Well-wishers at Woodhouse Moor parkrun in Leeds, UK sent Renton, Ben and Becca a video from their run briefing where they offered a toast in absentia to the happy couple; the gathering at Mountain Goat Trail parkrun in Tennessee also sent a video conveying their congratulations. Many more individuals from Ireland, the UK, Australia, and all over the US sent their well wishes to the couple. 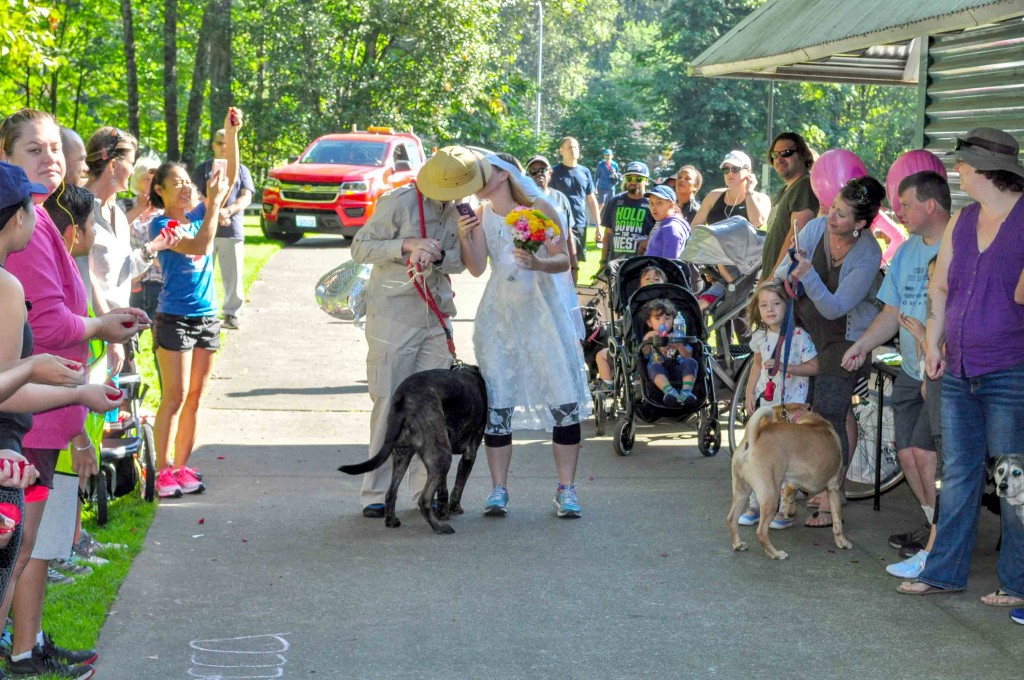 From Renton parkrun and the entire parkrun USA community, congratulations Ben and Rebecca!

Can’t get enough of the photos from Ben and Rebecca’s parkrun wedding? There are lots more on the Renton parkrun Flickr pool. Many thanks to volunteer photographer Blake Kennedy for the photos.