In the parkrun database of nearly 5 million barcodes, Hump Plotts A2976072, shows as having completed zero parkruns. Another person who registered but never took part? That couldn’t be further from the truth. Hump has spent longer on the course at College Park parkrun than anybody else. Well, anybody except for his wife, Lisa Wilson. We found out what keeps these two super volunteers coming back every week, in all weathers.

Lisa came along to the inaugural College Park parkrun as a walker, with her dog and her daughter. She lives directly down the street from the start/finish, and she was curious. “I saw an email from the city highlighting the start of parkrun. I could not justify to myself to not see what it was.” She has been back almost every Saturday since.

Hump got involved because Lisa asked him. Lisa: “After a few weeks I started volunteering, and one week I did the golf course marshal role, and found that you don’t get a run credit for that. Since Hump might never be able to do the 5k course, I thought this was how he could help.” Hump has been back almost every Saturday since. 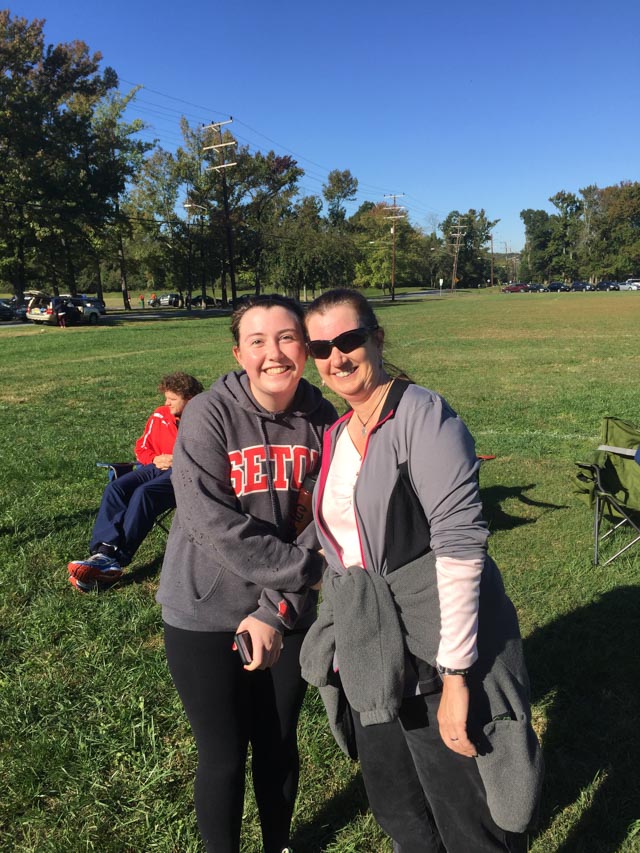 In the 87 weeks since Hump first came along, he has been golf course marshal 80 times. He’s such a fixture at the event that they named his spot “Hump’s Crossing”, and made him a sign that he proudly displays at his spot. Co-Event Director Colin Phillips: “We made the sign as a surprise for Hump when he was reaching his 25th time as marshal. On the day when (parkrun founder) Paul Sinton-Hewitt visited our parkrun last spring we arranged for College Park mayor Patrick Wojahn to present it to Hump as he ran past with Paul, and then the rest of the record-sized crowd congratulated Hump as they ran past.” 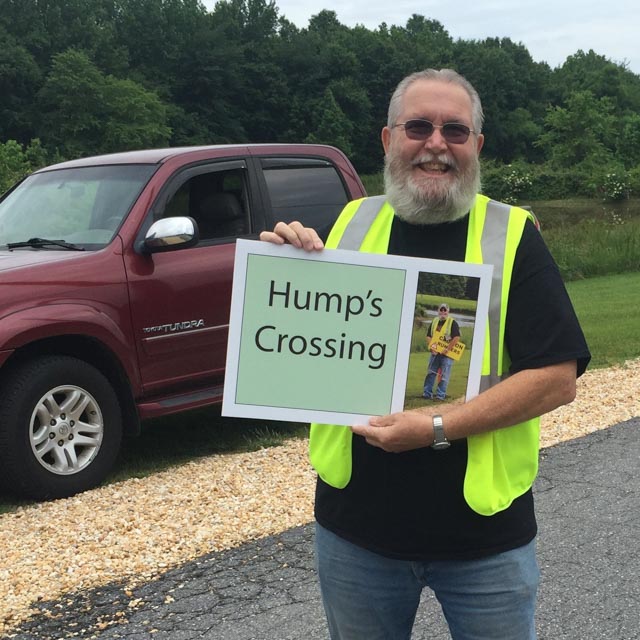 Lisa has volunteered on 80 times, and she has also completed the course 81 times, more than anybody else at College Park. She’s the turnaround marshal on an out-and-back, so she covers the full 5k like everybody else. She also takes thousands of photos of parkrunners from her wooded spot, and every week she accompanies the tail walker back to the start.

Being course marshals year round requires resilience, especially on the coldest winter days, when the temperatures have been known to reach single digits (that’s -10 to -15 in celsius). Hump: “I worked construction all my life. I got used to it.” Lisa: “You need to dress appropriately, and bring water in the summer. In the winter I get a hot chocolate from the nice golf course marshal.” 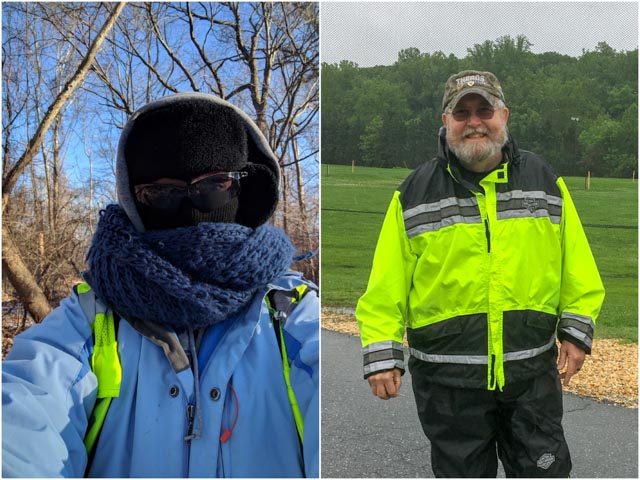 It’s not only the marshals who have to be ready for the extreme weather. Hump has brought along a water bowl specially for the barkrunners to drink from as they pass him in either direction. “All the dogs stopped for a quick drink. Even if the runners didn’t want them to.” 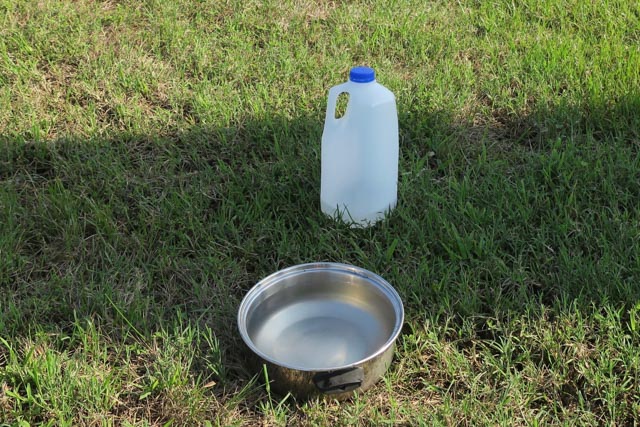 Lisa and Hump are as resourceful as they are dedicated. They have fixed event gear, they have even arranged for the course to be fixed. After a recent heavy storm made part of the course unsafe, Lisa arrived 2 hours early at her marshal spot to meet with a crew who would help clear the obstruction. On January 20th 2017, a march in Washington DC drew an extremely large crowd, blocking the roads into the city. Rory Murphy, the run director for the day, was stuck in a traffic jam. And the event directors were 400 miles away at Mansfield OH parkrun launch. So at 8:50 they were on the phone to Lisa in College Park, walking her through the steps of being Run Director. All went off smoothly, of course. A few months later, Lisa had surgery that meant she couldn’t fill her usual marshal role. But she came along anyway, and distributed finish tokens from a chair.

So what keeps them coming back every week?

Hump: “I enjoy all the people.”

Being a course marshal might not be your first idea of outdoor activity, but Lisa points out the benefits for Hump, who is retired, and has a wardrobe to prove it. “Hump retired about the same time that College Park parkrun began and I saw how he missed the socialization, and really needed some form of exercise. …. I love that he walks more on Saturday mornings just doing his figure 8′s at the golf course than the rest of week. He has lost pounds and he has a bit more energy since he started showing up at parkrun.” 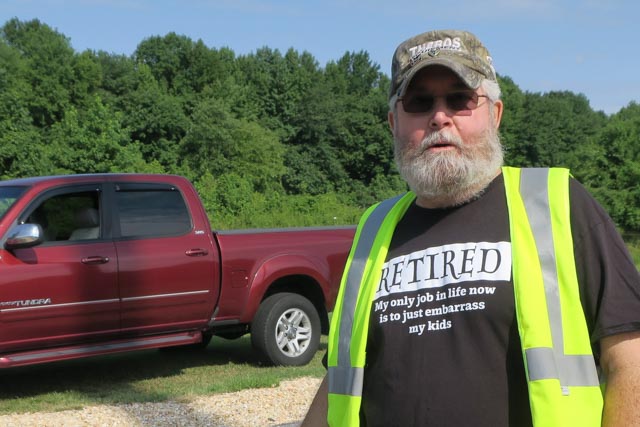 In their parkrun roles, Lisa and Hump have a different vantage point than everybody else. They’re often the first at the park in the morning, then after helping to set up they’re out on the course before most people arrive. Folks pass them in a flash, and by they’re the last to return to the park, after most people have left. So have they got to know the people that pass them?

Hump: “Just by face, not by name, I only know a handful of names.”

Lisa continues: “The first walk down the trail in the woods, and waiting for the runners to arrive is very peaceful. If I don’t do parkrun for a week, it seems something is missing from my life. That serenity I find in the woods is very comforting. Then I learn about the tail walkers or the last person to arrive at the turn around. These are the folks whose names I don’t forget.”

Lisa: “Violet and her puddles. And everybody’s milestones.” 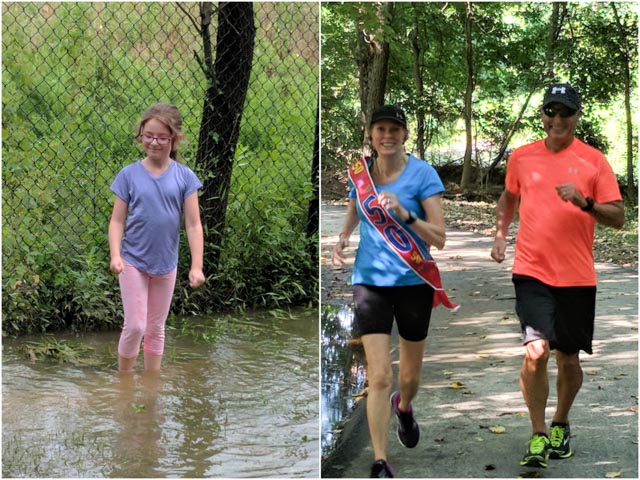 Co-Event Directors Andrea Zukowski and Colin Phillips marvel at what Lisa and Hump bring to the community. Colin: “Who would have thought that we’d start a running event and these two would become its greatest supporters! They’re a reminder that it’s really a community event.” Andrea: “Most of our parkrunners have little idea how much Lisa and Hump contribute to the event. I cannot imagine College Park parkrun without Lisa and Hump.”

Last week we had three events join the thirty that had already returned post Covid. One of the events wasn’t really a return as it was a launch event. We’ll do a feature on Peace Valley parkrun in the coming weeks but for the meantime we want to give a very big welcome to Matthew, Patrick…