Over a post-parkrun coffee last winter, one parkrunner commented, “My body is falling apart!” A newcomer to the group chimed in, “Let me show you what that really means.”

Neil Jograj really knows what it means for a body to be struggling, after confronting many issues following a 20-year military career. But he is always smiling at College Park parkrun, which he generally runs while guiding his wife Julie, who is blind. He was recently surprised to be named as parkrunner of the month. The next week he sprung his own surprise by stepping up as a debut run director. 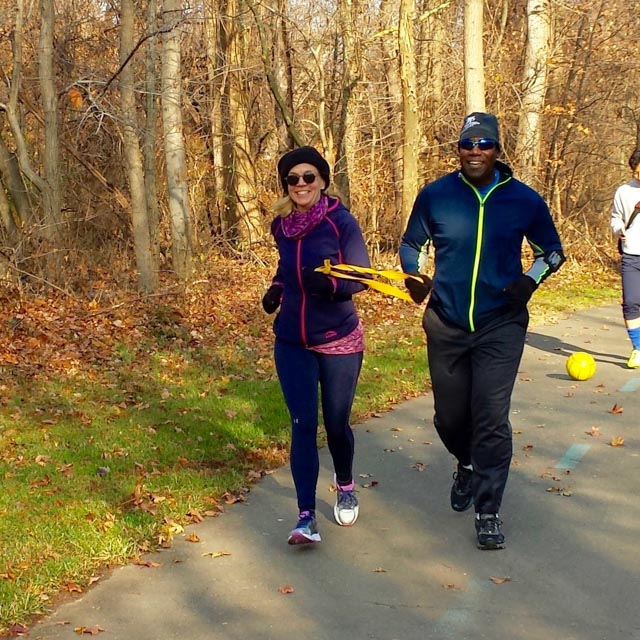 Neil did a lot of sports: “In high school I ran track, played soccer, wrestled, and more. In the Navy I was a fitness coordinator for most of  my commands. I ran 5Ks, 10Ks, half marathons, and marathons. I also loved to swim.”

Julie wasn’t so sporty. She was talented academically, but just did a bit of exercise on the side. When she was in college in New Orleans, she and her girlfriends would go running on a Sunday morning after a late night out with friends, “mostly to check out the guys in the park.”

One morning when Julie was 21 she woke up blind. That made it harder to do many things, but especially to pursue physical activity. Her mind was strong and she went on to enjoy a lot of professional success, but it was hard to stay fit.

Neil’s Navy career took him around the world, including to Iraq. But the career took a toll on his physical health. After retirement he developed avascular necrosis, a gradually acting condition involving death of bone tissue. He had 9 surgeries in the space of 4 years. Julie: “My house is a graveyard of medical hardware: wheelchairs, walkers, the works.”  X-rays of Neil’s legs show that there are big chunks of bone that are missing.

At some point in their early 40s it became clear that they needed to make a change. Neil’s health was struggling and they did not want him to become a patient with a chronic disability. At 42, Julie realized that she had been blind and out of shape for half her life. “I told myself, I can’t change being blind, but I can work on being in better shape. If we don’t get in shape now, it’s just not going to happen.”

Julie was accustomed to being surrounded by fit people, working on health programs for the Air Force. “At my work, you can bring a dozen donuts, and nobody touches them. It’s pathetic!” But she felt less comfortable getting fit in public. She started working out alone on an elliptical.

Over time, Neil and Julie did more and more to get fit together. Neil: “With Jules in my life, I developed a love for sailing, indoor rock climbing, and other activities. We ride a tandem bike, hike, and run.” They sail a 35-foot sloop up and down the East Coast, from Virginia to Connecticut and Martha’s Vineyard. They even sailed together in a regatta on the morning of their wedding.

Neil’s relentless positivity is a big part of the story. He rarely stops smiling. “After 20 years in the Navy you learn to look at life with the outlook that there are joys in everything. I have a more realistic attitude after the decrease in my vision, the deterioration of my bones, and tons of other crazy changes to my body. The changes in my health have driven me to hold even more to the things that I value. No matter what, life keeps me strong and motivated. If I am the positive one when all hell breaks loose, people will focus on the positive, and we will all succeed together.”

Julie: “I’m the shy one. Neil doesn’t even know what shy is. He’s never met someone that’s not his friend.”

Neil and Julie started running together only fairly recently. They did their first 5K together in a Thanksgiving 2017 Turkey Trot. It was fun, but it was a one off. Julie wanted to do more, but $25-$30 wasn’t sustainable on a weekly basis.

Julie started looking around for other options. “I looked for something that brought together things important to us: health, people, and food. Everything’s better with food!”

They first showed up at College Park parkrun the week after Thanksgiving. They ran slowly, towards the back of the field, but they immediately felt like they fit in. Neil: “No one gets left behind, no one is last, and no one is a loser.” Around them on that day were an 80 year old, a 4-year old, a Muslim woman running in an abaya, and a walker. All smiling. At the post-parkrun coffee they enjoyed meeting new people. They promised that they would return. 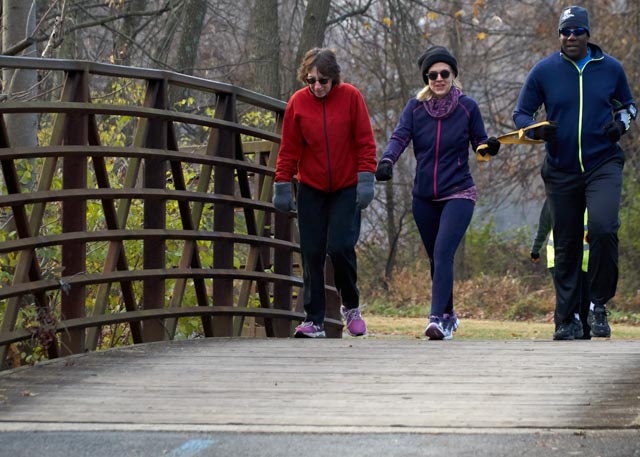 After a couple of parkruns they started volunteering, generally in roles that still allowed them to exercise. “On days when one of us is feeling slow it is great that we can chat with the walkers or volunteer as a tail walker.” Their average finish time is around 50 minutes, though their best is around 40 minutes.

By New Years they did their first spot of parkrun tourism, calling in at Clermont parkrun in Florida while traveling. They were among the die-hards who showed up for College Park’s coldest ever parkrun, on a January morning with temperatures in single digits Fahrenheit. They checked out Kensington parkrun when it opened not far from College Park in March. 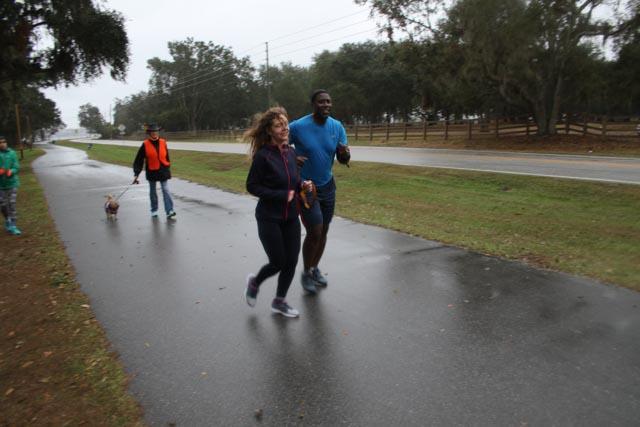 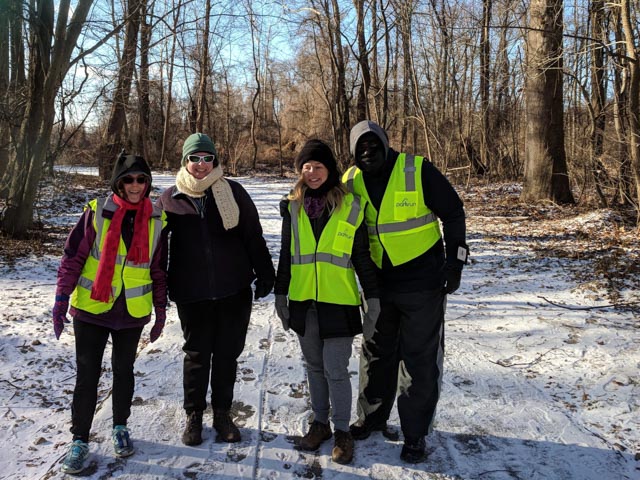 On a recent August morning Neil took a turn as tailwalker, and on that same day the College Park team surprised him by giving him their parkrunner of the month award, in recognition of his positive contributions to the community. On that day Neil noticed that the next week’s run director role was still open, so he said, “I can do that!” He wasn’t really sure what it involved, but he knew that there would be support to help him.

Co-Event Director Andrea Zukowski was away on the day when Neil was at the helm, but she lined up a mix of veteran and new volunteers to support him. 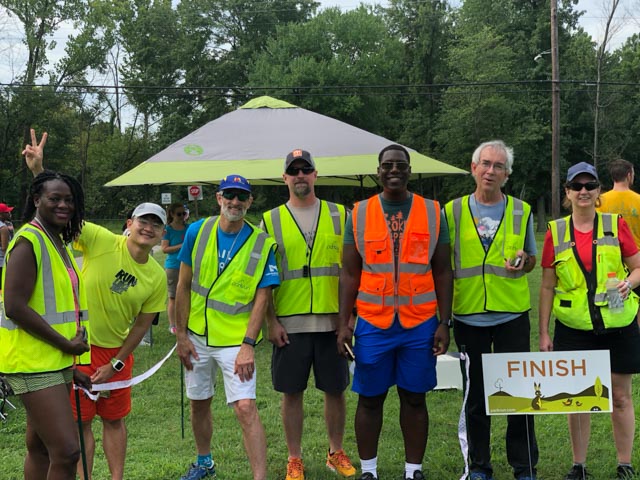 Neil was nervous about doing everything right, and this surprised him. “I have seen a lot of work-related stressful environments, but never did I expect to be nervous doing something fun.” A few people show up early for parkrun, but most people stream into the park right before 9am. And then after the first few runners return, it’s a hive of activity for the next half hour or so, before the team packs up and retires to the coffee shop to sort out the results.

Julie: “I was thrilled that Neil was run director. He has endless energy, and he loves to give directions. Something like a Chief in the Navy giving orders.” 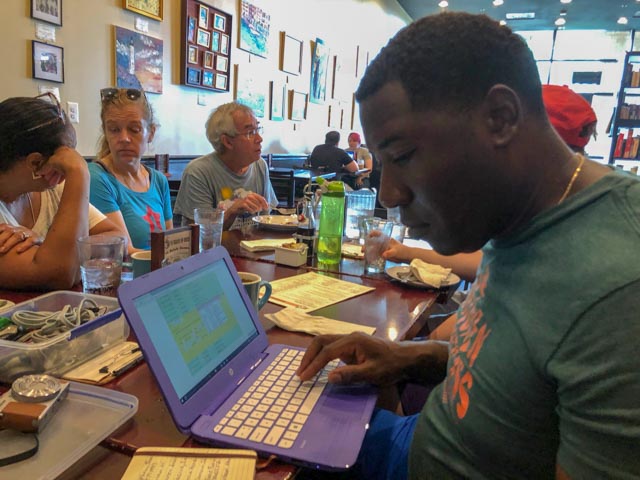 Mom in the Mix

To mark the occasion, Neil also brought along his mom. Dottie Jograj is a charming 70-year old Jamaican lady, who is regularly active as a walker, but isn’t used to going as far as 5k. Dottie was proud to walk the whole course, in the company of Julie and substitute guide walker Anna. And she was just as proud to see her son in charge of the event. 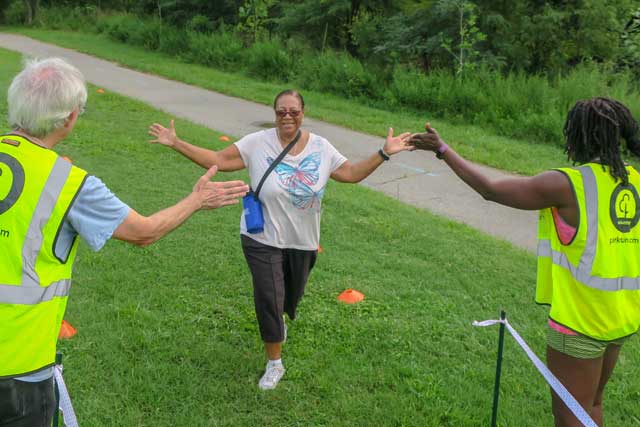 Dottie felt the same welcome that Neil and Julie had felt when they first visited, the same surprise that she fit in. So she was back the next week for more. This time Neil and Julie were back to running together. But Dottie already had a parkrun friend, Anna, who she had walked with the previous week.

Meeting Dottie, you understand where Neil got some of his outlook from. Julie: “It was awesome to bring Dottie. She’s socially a force. She’s happiest with people. It’s a good way to start the weekend. You get up, you move. You have good conversations. I never have to worry about Dottie having conversations.” 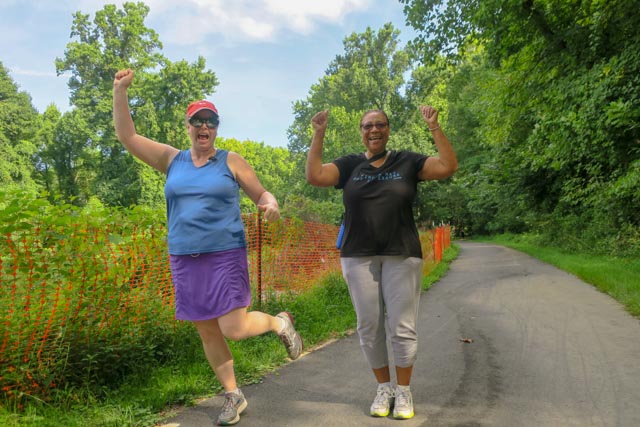 Neil and Julie are grateful to parkrun for what it does for them.

Julie: “parkrun is an encouraging group that has challenged us to do a bit more, be a bit more, and give a bit more. People have two needs: to belong and to have purpose. Thank you for starting College Park parkrun. It means more to us than you will ever know.”

Neil: “I am encouraging my friends at the Wounded Warrior Program to get involved with parkrun. Other veterans need the community that parkrun provides.”

But at College Park parkrun we are just as grateful to Neil and Julie for the inspiration and warmth that they bring to the community. We all have niggles, and we have ups and downs in life, but these two remind us to see the positive.

Last word to Julie: “My mother said something to me when I was 21 and still in the hospital. I could live a perfectly normal life. We just have to figure out how. My goals for life never changed. Neil’s never changed. We just changed how we get there.”