At Livonia parkrun Lynn Boven recently became the first US parkrunner to join the 250 parkrun club. Lynn reached this milestone 6 years to the day after showing up for his first parkrun. That’s a lot of parkrunning, even in cold Michigan winters. But for Lynn that only adds to the appeal.

On November 17th Lynn Boven’s friends threw him a little party. It was a parkrun party celebrating Lynn’s 250th parkrun. Those of us lucky enough to participate at Livonia parkrun know how fortunate we are to have Lynn as our Event Director, our Equipment Storage and Delivery Specialist, and our Event Set-Up Expert. Lynn does all these official roles every week, but he also does much more. His banter, his wide circle of friends, and his connections to the local community, make him an ideal ambassador for Livonia parkrun. 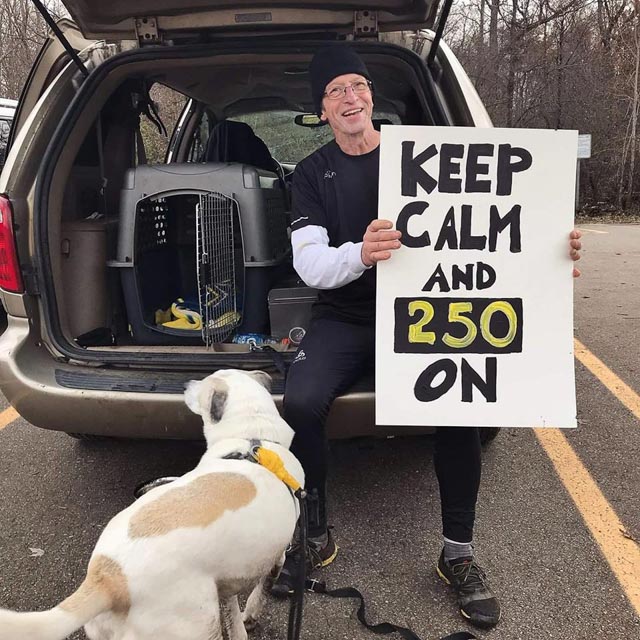 Lynn found out about parkrun in a roundabout fashion. Livonia parkrun started in June 2012, launched by a local high school track coach and his wife, Rick and Lori Brauer. It was the first US parkrun. At the time Lynn worked with Robert Vance, Lori Brauer’s brother, and from June until November 2012, Robert would often come in to work and mention his volunteering at an event on Saturday mornings. Robert knew Lynn was a big runner, and Lynn knew Robert was volunteering at some sort of free community event, but it wasn’t until Lynn saw a blurb about parkrun in the local newspaper that he connected the two. Lynn then came to parkrun for the first time on November 17, 2012 at Livonia’s event #25, and he never looked back.

When Lori and Rick decided it was time for them to step away from parkrun they knew just who would be an excellent caretaker of their parkrun baby. Lynn, along with Spencer Greve, gladly stepped up to the challenge of being Co-Event Directors.

Lori and Rick would occasionally cancel Livonia parkrun for inclement weather. We get plenty of that in Michigan. On the other hand, a snowstorm or a flood are magical occurrences to Lynn, creating extra incentives to get out and run, and looking forward to whatever interesting weather or course challenges await.

We are happy we have only had one cancellation during Lynn and Spencer’s Event Director tenure, due to a park closure following a storm. Once the danger passed, several parkrunners met up to do a freedom run through the two to three foot deep floodwaters that engulfed our normal parkrun route. Lynn was in heaven. 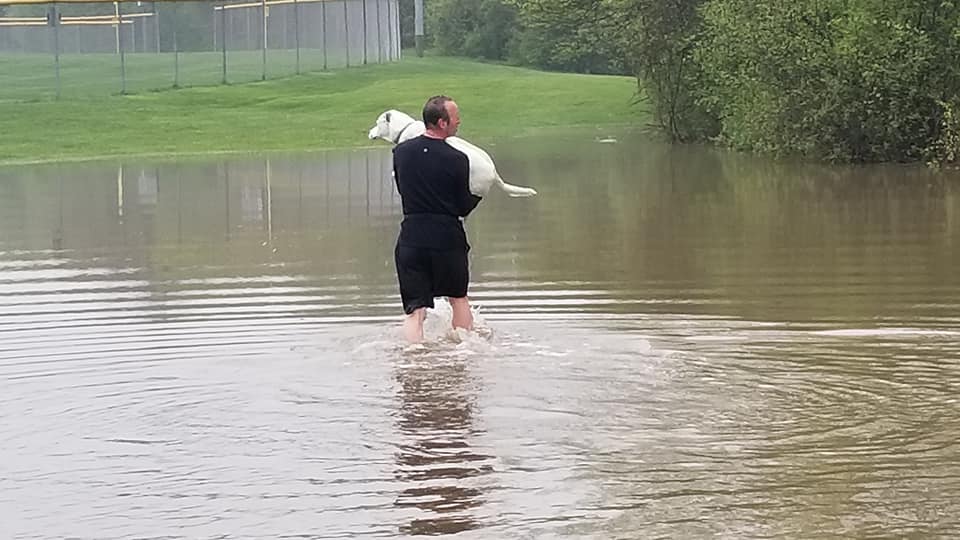 Lynn and his wife Joanne recently celebrated their 40th wedding anniversary. After getting a pass from Joanne for 250 Saturdays, Lynn did not think he would get permission from home to do Livonia’s first ever Thanksgiving parkrun. We do not know what went on behind the scenes, but Lynn did get permission and we enjoyed his presence on Thanksgiving Day as well. Lynn’s wife, daughter, and granddaughter all came to help Lynn celebrate his 250th run.

Lynn spends a lot of time playing with his granddaughter, water play, playing with Lynn’s dog and parkrun companion Cooper, playing in the garden, and frequent trips to the playground. Lynn works the afternoon shift at General Motors, leaving much of the day to play with Jolynn. Also during the day, Lynn always finds time for a workout. Close to his home is Hines Park. Hines Park is a pre-planned flood zone through much of Wayne County, hugging the Rouge River. The road through Hines Park is frequently closed to vehicle traffic, leaving Lynn to use it as his playground, either running on pavement, the trails, or riding his bike. 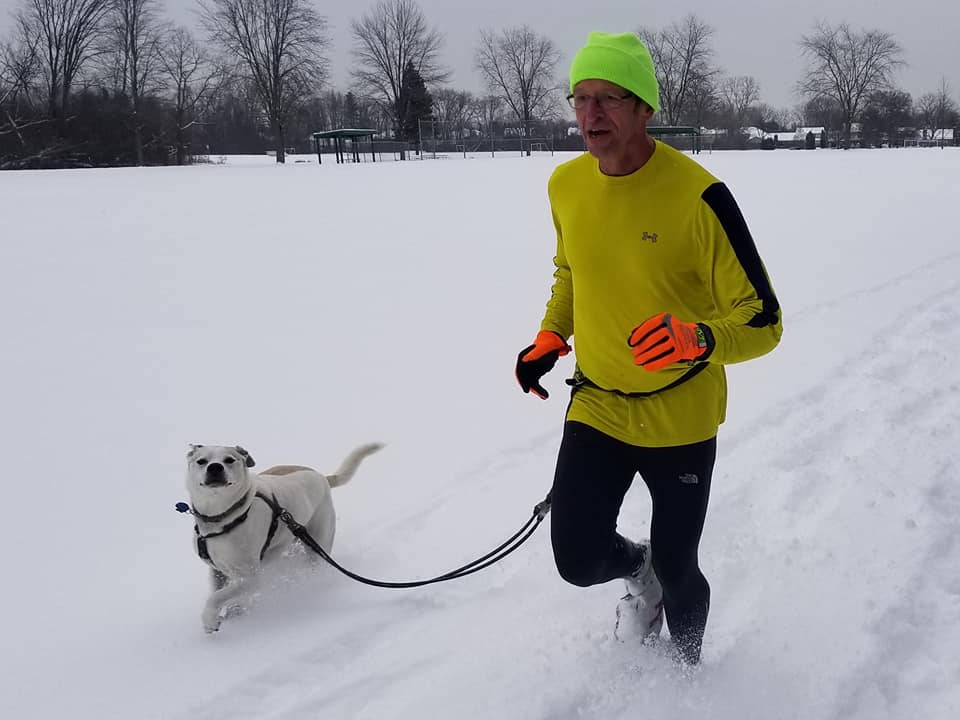 To say Lynn is a big runner actually is an understatement. Lynn runs nearly every day, and on days off, rides his bike. Lynn is also an ultra-marathoner, having completed several runs of 50 miles or more along with assorted regular length marathons. Lynn has run Rim to Rim of the Grand Canyon, and surprisingly speaks fondly of throwing rocks at the mountain lions trying to sneak up on him in the dark to scare them away. Lynn recently completed the Detroit Free Press International Marathon where you run across the Ambassador Bridge to Canada, and then back to Detroit through the tunnel under the Detroit River, a beautiful and challenging marathon.

Speaking of Canada, Sault Ste. Marie, Canada is the home of Bellevue parkrun, Lynn’s only International parkrun to date, where he holds one of his two age group records. Lynn has also enjoyed his trips to the Mansfield and Leakin Park parkruns. Lynn’s current job on the afternoon shift, along with limited vacation time, limits his ability to travel to other parkruns, although the recent launch of Lillie parkrun, only 30 minutes drive from Livonia parkrun, makes for a tempting target. Upon retirement at some future date, Lynn hopes to be able to travel and visit so many of the wonderful tourists who have visited Livonia throughout the years, along with meeting many of the friends he has virtually met through the parkrun USA Facebook group. 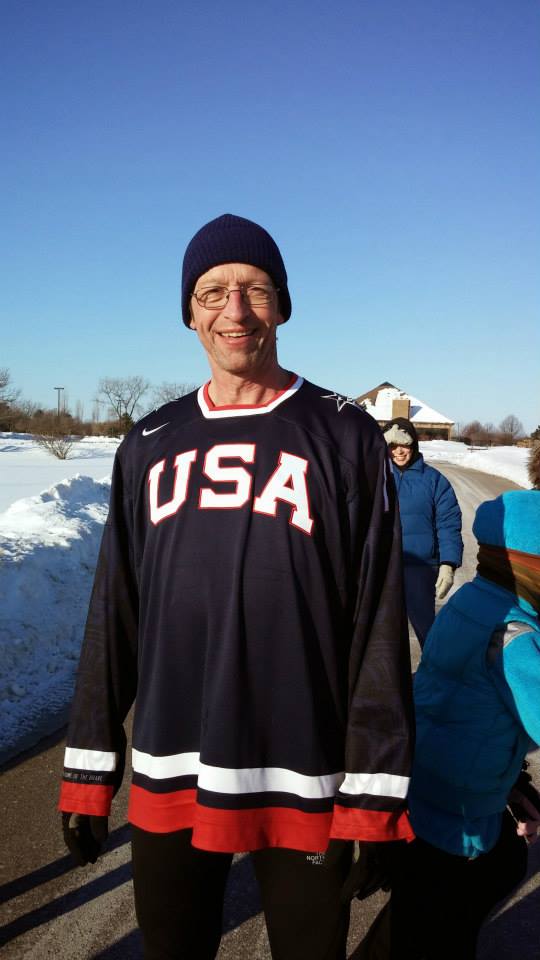