Our small steps may have felt like such a giant effort this weekend, with much of the country baked in a heatwave. Through the innovation and determination of our volunteers and participants, we survived the heat, celebrated 50 years since the moon landing and continued the parkrun magic! 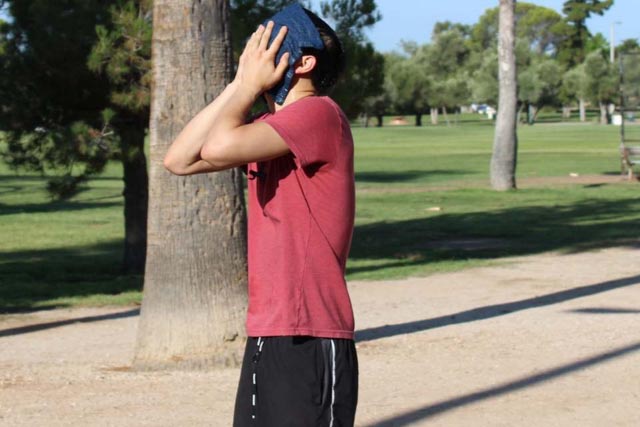 A cooler full of ice cold wet towels provided by parkrunner Alec were a welcome relief as the finish line temps approached 90 degrees at Himmel parkrun in Tucson, AZ. Great idea, and Thank You! 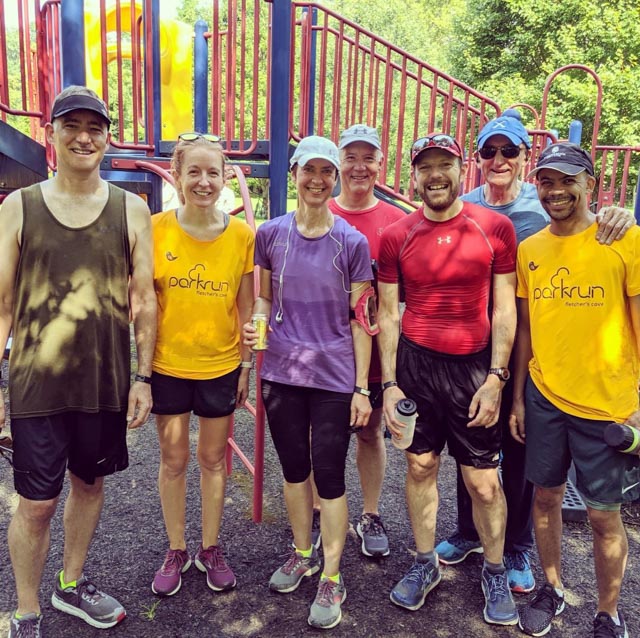 Fletcher’s Cove parkrun canceled, due to excessive heat and a lack of shade. Lucky for these regulars, they could take the short trip to shady Kensington parkrun for a spot of parkrun tourism. 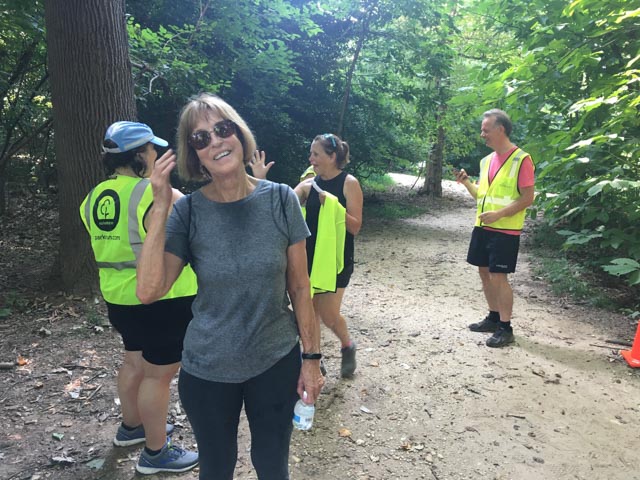 Judy Wynant is a regular at Anacostia parkrun. With that event cancelled this weekend due to the heat, she took the opportunity to walk the shaded trails at nearby Roosevelt Island parkrun. The Island hosted ‘refugees’ from both Anacostia and Fletcher’s Cove parkrun. 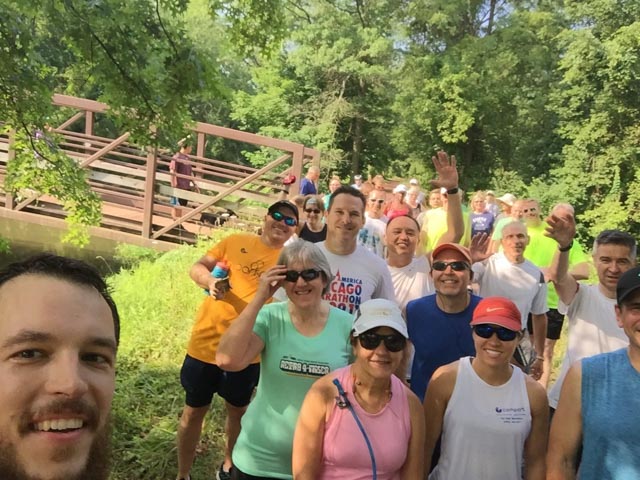 Delaware and Raritan Canal participants, happily waiting for their starting orders. Shades and caps the order of the day on a hot and humid day in New Jersey. 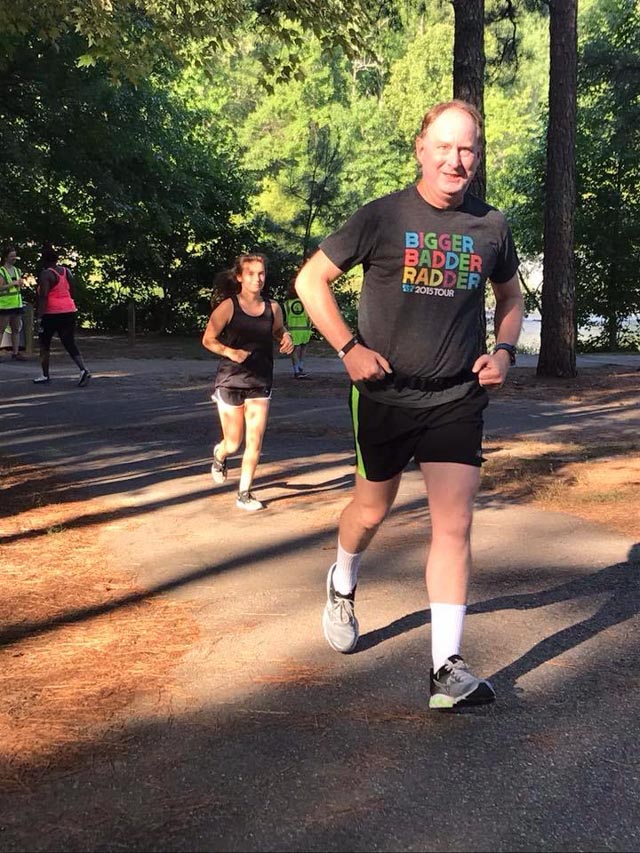 What could explain one of the largest ever crowds at Deep Run parkrun in Richmond, VA? Maybe it was the cooling shade. Or maybe they heard that a parkrunner had brought popsicles. 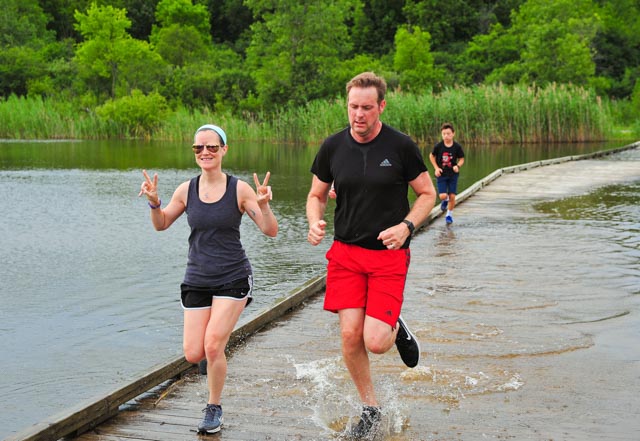 The puddle on the boardwalk turned out to be a welcome way to stay cool in the heat at Lillie parkrun. 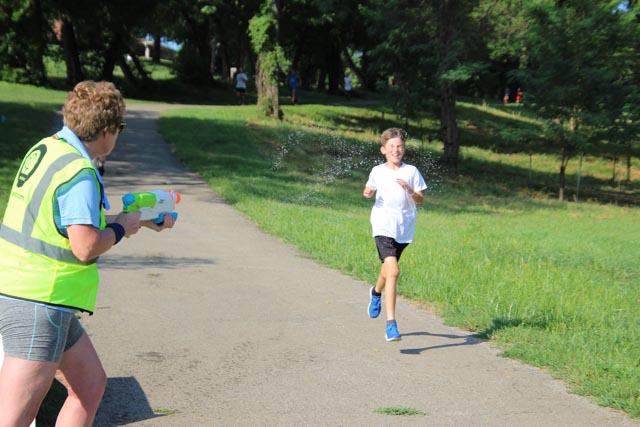 Here’s another way to beat the heat – Super Soakers! Totally optional, of course, but almost everybody wanted a squirt. 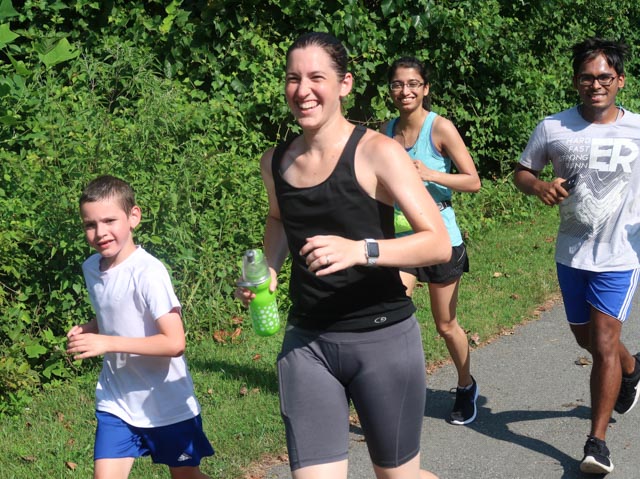 To combat the heat, personal bests were abolished for the day at College Park parkrun, and personal worsts were embraced, with a third of the field accomplishing their slowest parkruns.

Neha and Yogarshi were among the proud “PW” achievers. Xander didn’t manage an all-time PW, but since it was his slowest time since he was barely 5-years old, that’s good enough for us. 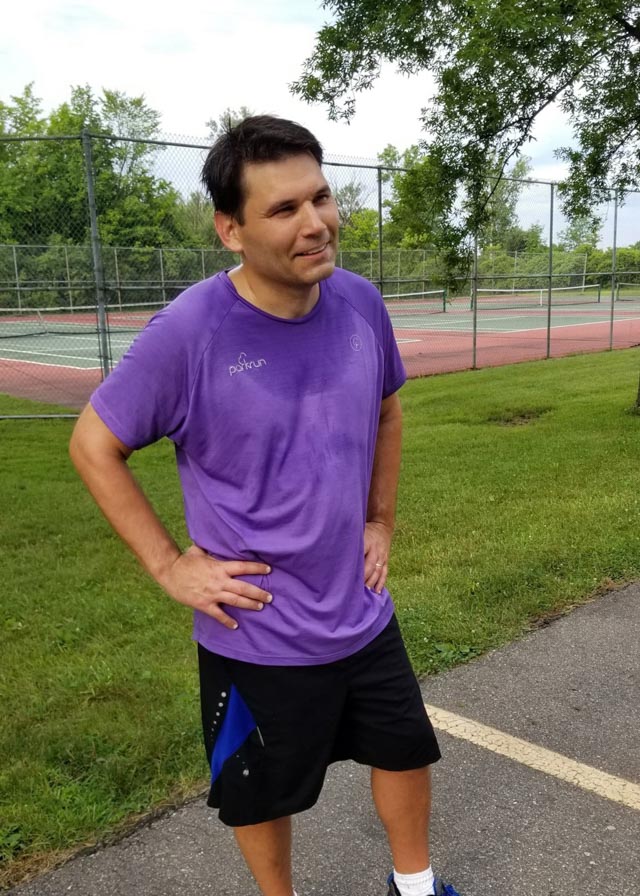 Sam Bailo has finished 259 parkruns, almost all of them at Livonia parkrun. So it’s remarkable that he has now set a PB 3 weeks in a row. We want to know what he’s having for breakfast!

Donna traveled halfway around the world to do her 100th parkrun at Crissy Field parkrun. Congratulations! Bay Area locals get to enjoy this every week, for free. 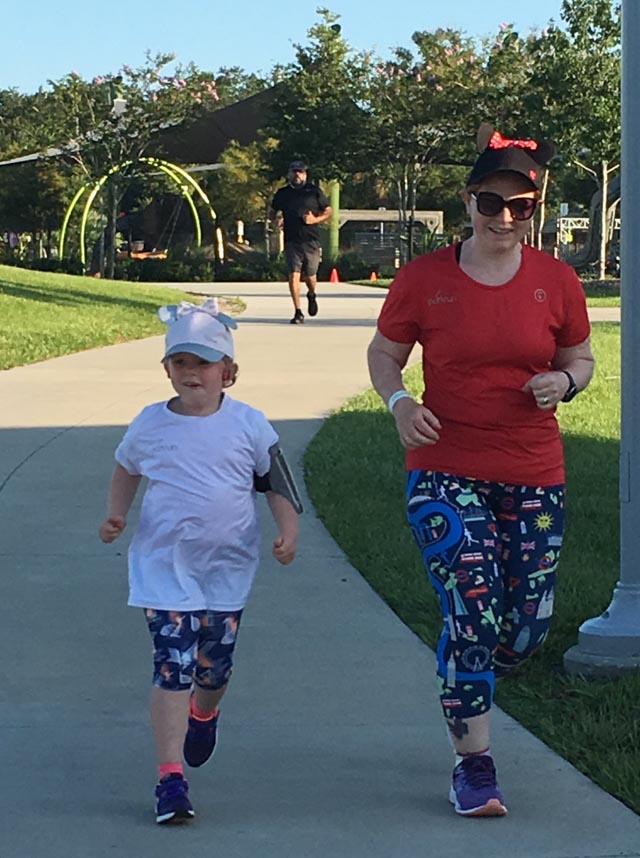 Depot Park parkrun welcomed a special parkrun family from England who, together have completed over 260 parkruns, with 6 year old Rose responsible for 57 of them! 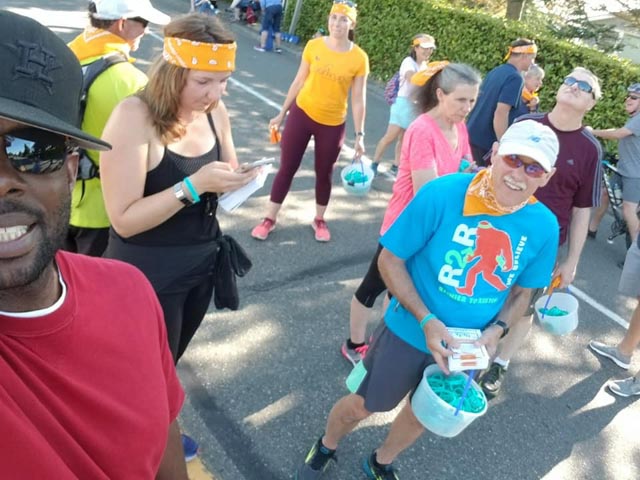 The Des Moines Waterland Parade celebrated its 60th year this year. Des Moines Creek parkrun is about to celebrate its 60th event, too. But they have done that in a little over a year. The DMC parkrun community was out in force to spread the word at this year’s parade. 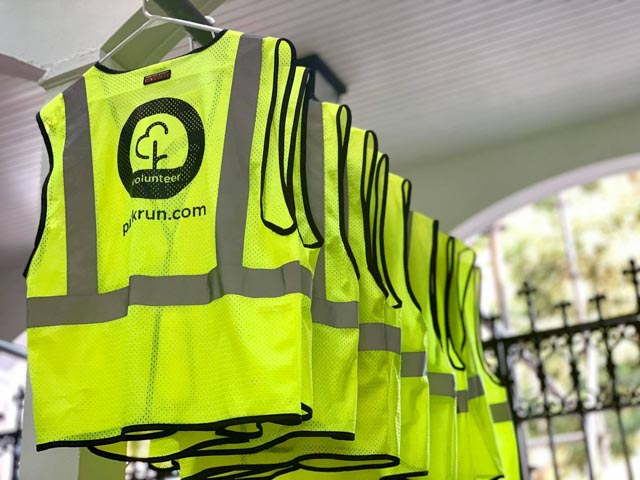 All our hi-viz heroes deserve extra kudos this weekend for supporting everybody in the heat. And at Charleston, the volunteer vests got a well-deserved wash. 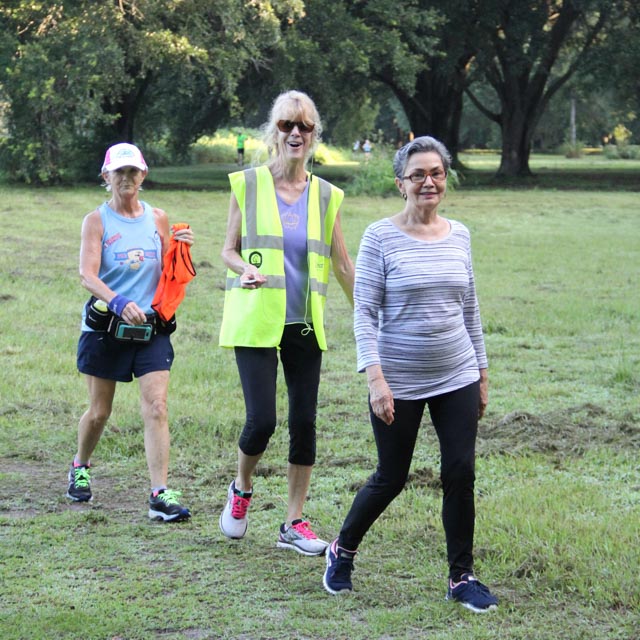 It was a great weekend to slow things down a little. At Clermont parkrun it was a perfect day to enjoy the company of the tailwalker. 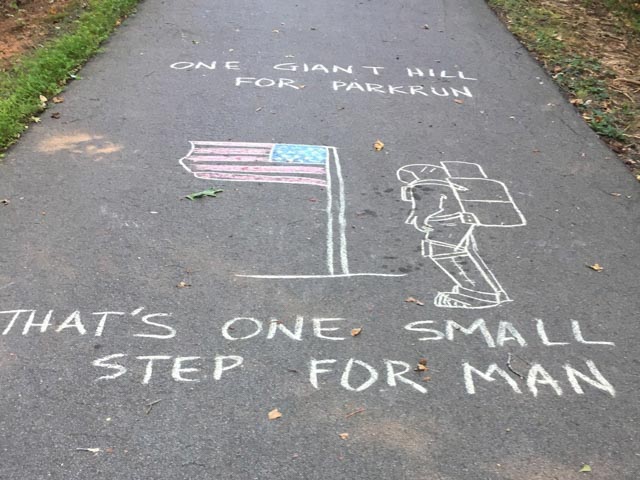 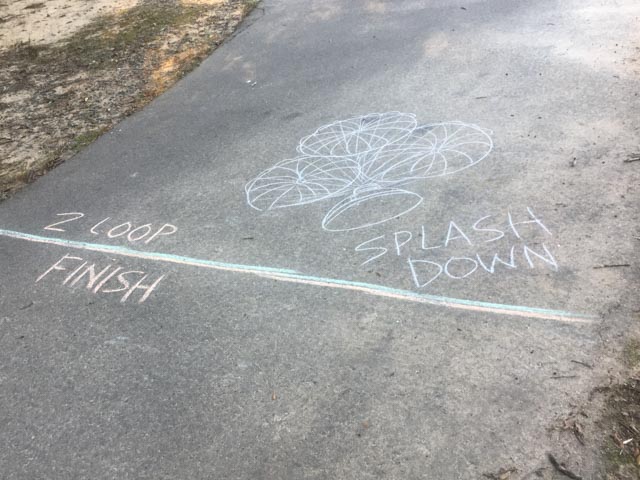 It’s an out-and-back journey, and at the end you’re a bit wet. Summer parkrunning at Durham NC parkrun isn’t so different from a moon mission. 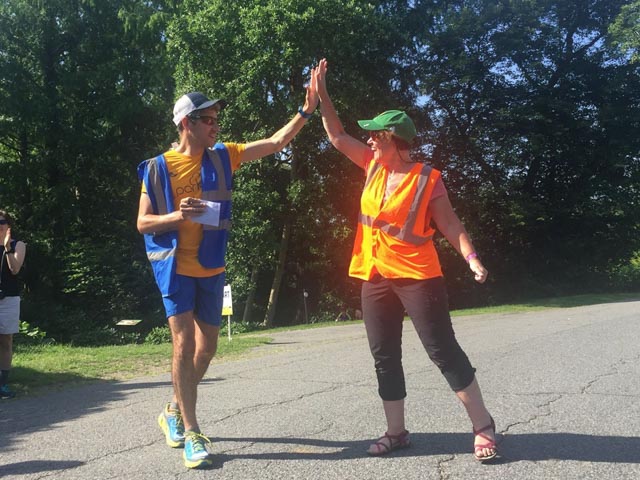 At Jamaica Pond parkrun they bid a fond farewell to Lynda, their second recent departure of a dedicated volunteer to North Carolina.

Know of anybody looking to start more parkruns in NC? 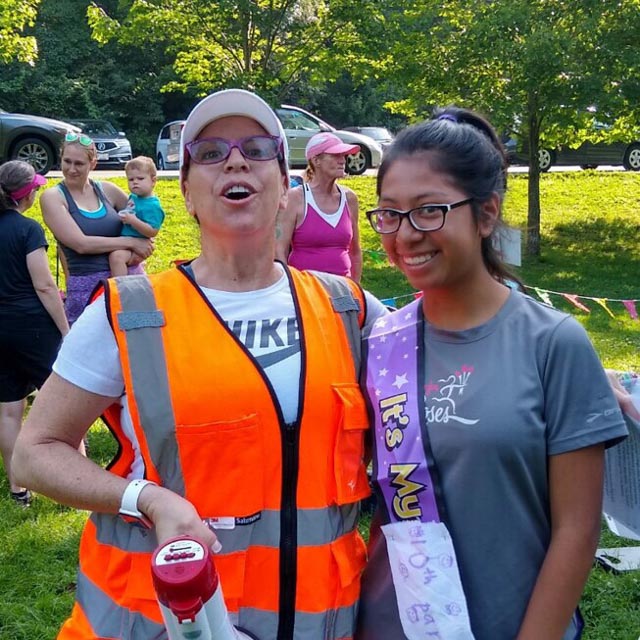 At Kensington parkrun, regular runner and volunteer Emily debuted as RD and did an awesome job. She had the pleasure of presenting Rosa with her 10th parkrun milestone sash. 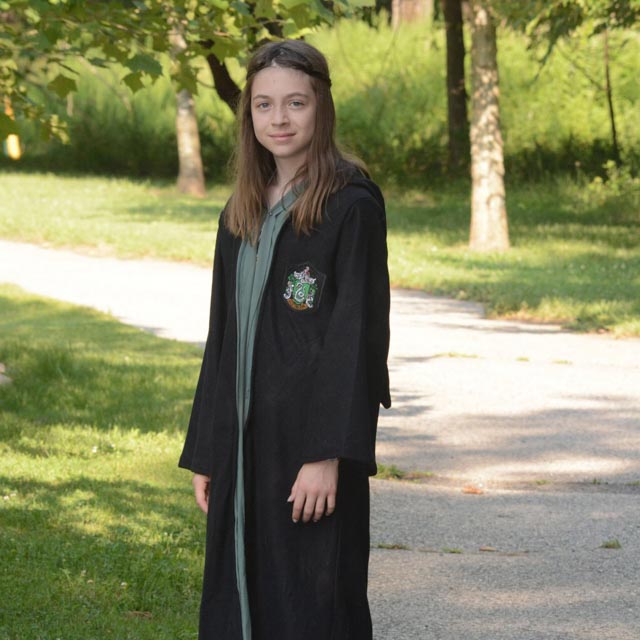 No, they didn’t abandon parkrun for Quidditch at Leakin Park, but spearheaded by Vivienne, they held a Harry Potter themed parkrun in honor of Harry’s birthday. Vivienne’s daughter Autumn gave the pre-run briefing, Her tales of dementors and moving bridges did not seem so far fetched after the storms that the Leakin Park course has seen in the past 2 years. 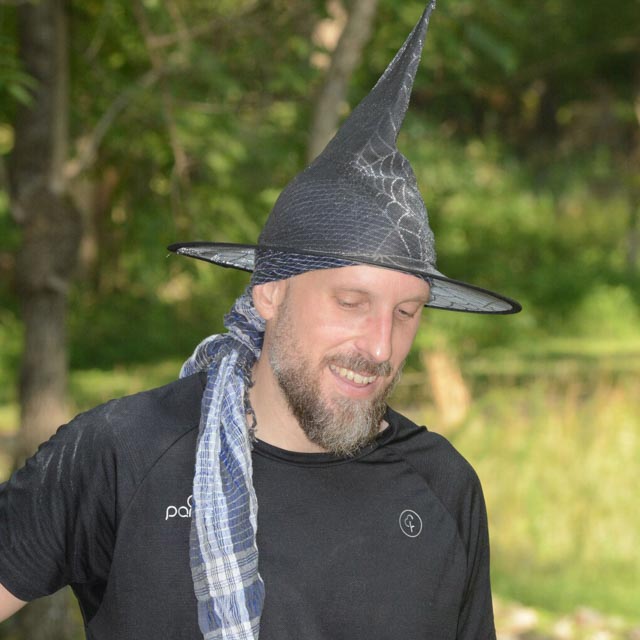 In this heat, even wizards can appreciate some lightweight, performance-oriented clothing. A black parkrun 100 shirt is just the ticket. 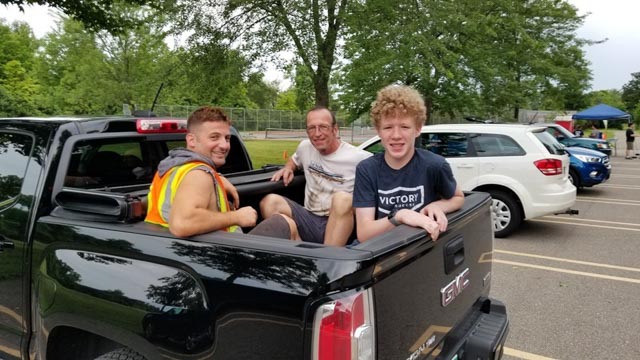 A pre-event course check at Livonia parkrun found a tree had fallen across the path in the woods. Frequent volunteers Lynn and Patrick, along with new volunteer Greg sprung into action. Well done guys!

Seeing double? At Mansfield OH parkrun they celebrated Jon becoming their first 100-club member. They also switched to a double out-and-back course this week, so that they could better look out for each other in the heat. 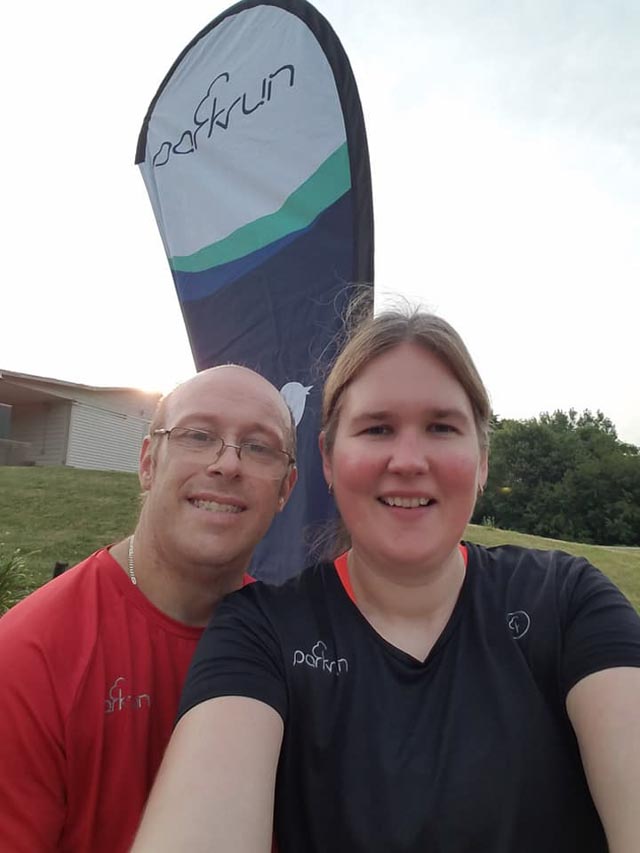 Janet and Chris stopped off in the middle of a cross-country move. They just ‘happened’ to be near a parkrun on Saturday morning. They didn’t expect to both come away with age-group records at McAllister parkrun. 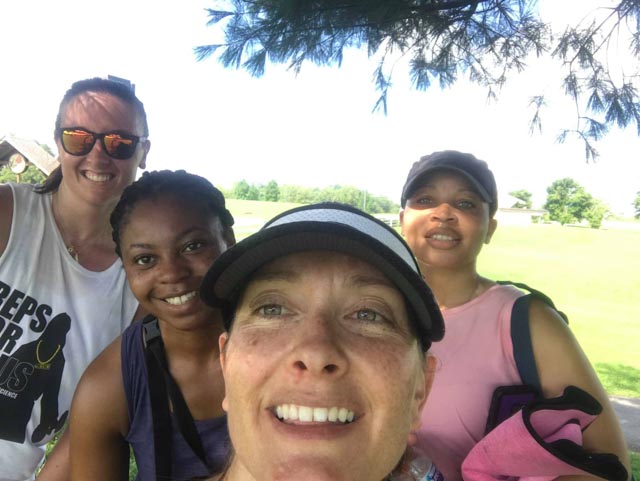 Enjoying the shade of the trees at Oak Grove parkrun 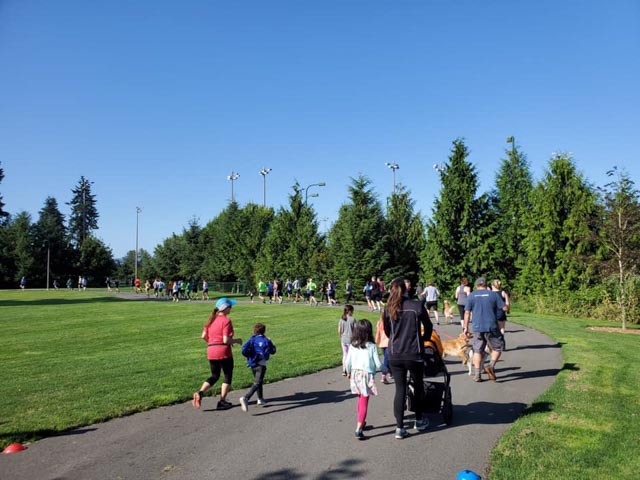 At Perrigo parkrun in Redmond, WA they enjoyed somewhat cooler weather than parkruns in the east. It was a great morning for families with kids and barkrunners to enjoy the outdoors.

At Pensacola’s Rec Plex North parkrun, father and son Jim and Todd Harris have been regulars since the beginning. Jim had multiple bypass surgery some years ago and in an effort to become more active, he joined Todd at parkrun. They both look forward to their time together at parkrun each week and after finishing, they go to a weekly family breakfast together. 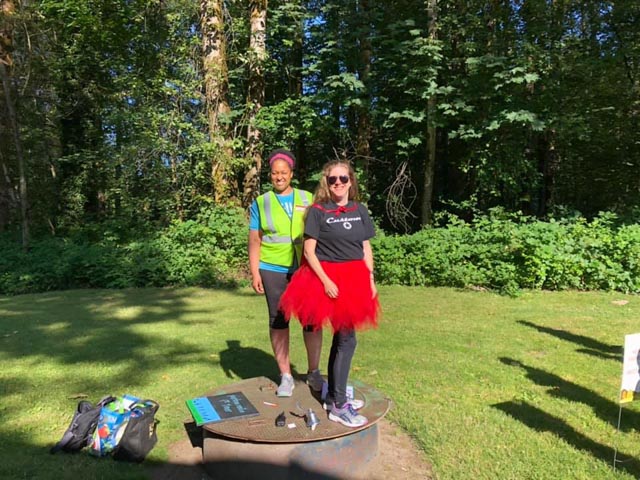 Daphne is a natural! Last month, after only her first parkrun, she responded to an email looking for new run directors at Renton parkrun. Since then she tried out all key volunteer roles, this week did her debut as RD.

Daphne: “Today was absolutely FANTASTIC!! Such an awesome day! I’m so grateful for the opportunity to be a Run Director and to be involved with parkrun!”

As a bonus, she got to bestow the red cape *and* bonus red tutu as Drea celebrated her 50th parkrun. 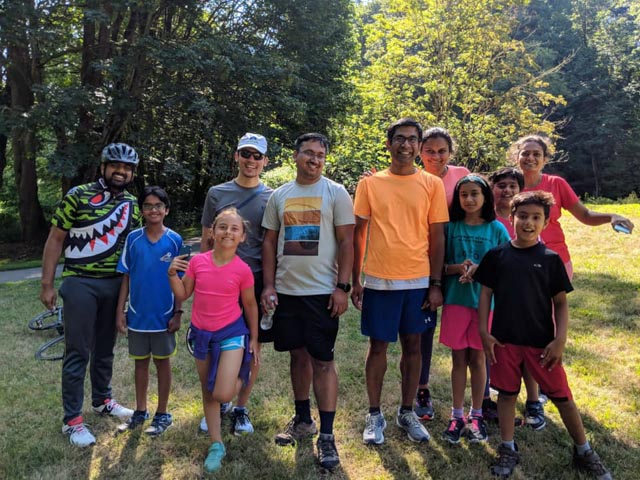 Srinivasan and Vidhya have been recruiting parkrunners, and their crew is growing! Their son Ahkil earned his 10 shirt recently and sister Dahnya is now motivated to get one for herself! 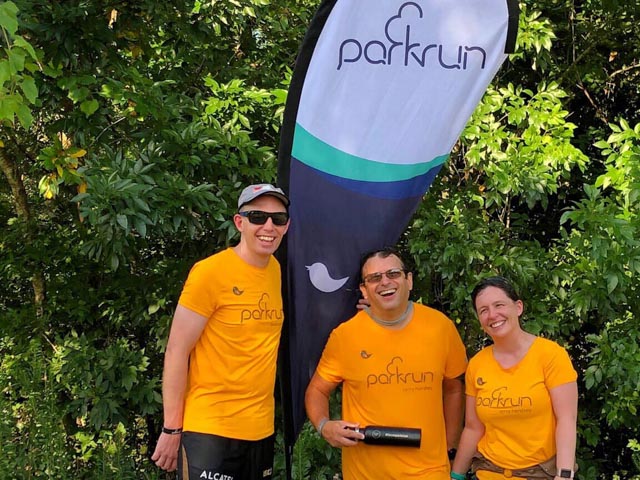 Keen parkrunner Chris grew up just 5 minutes from Terry Hershey Park. So naturally he was thrilled when a parkrun opened there early this year. The only problem is that Chris now lives 8,000 miles away in the Southern Alps of New Zealand, where he is event director of Queenstown parkrun. This week he escaped the southern winter to sweat with his new friends at Terry Hershey parkrun.

High fives for everyone at Sippo Lake parkrun. 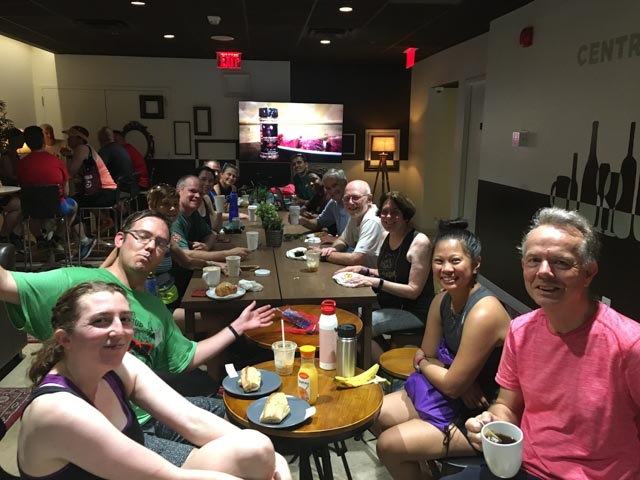 After a steamy run or walk at Roosevelt Island parkrun it felt extra good to chill with friends at the post-parkrun coffee.