From Addiction to a New Healthy Habit

In high school and college, long distance running was a hobby for Peter Wachira and something he really enjoyed. However, when he lost his mother his world changed.

Peter shares the story of how parkrun helped him overcome alcohol addiction and soaring blood pressure. This week his friends at Anacostia parkrun in Washington DC will be cheering Peter as he completes his 50th parkrun. 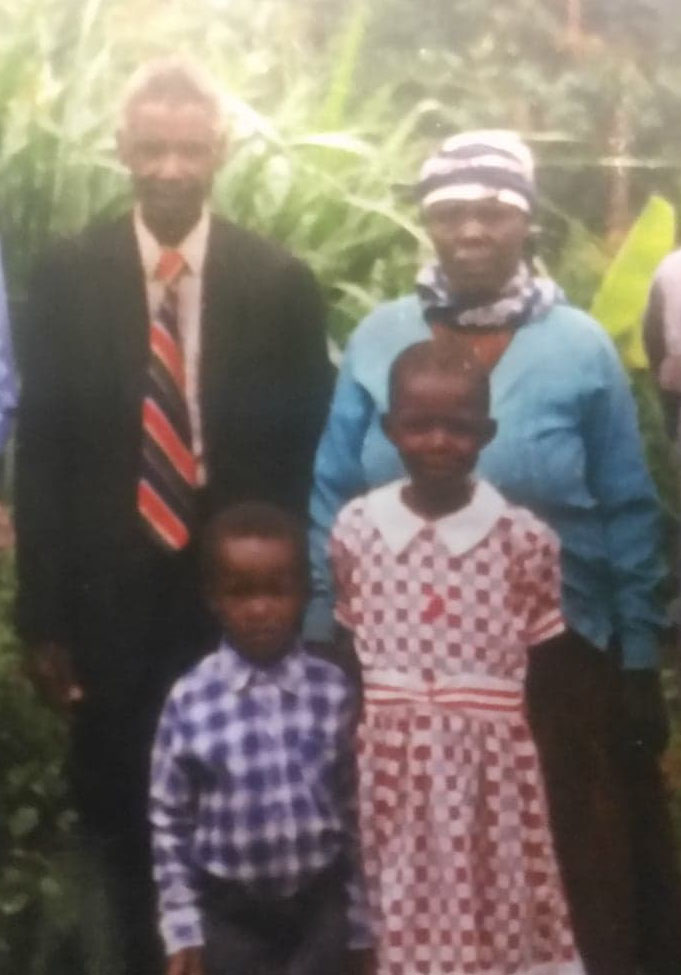 Childhood in Kenya. Peter with his parents and sister

After losing his mother, Peter became depressed, started drinking too much alcohol and his blood pressure soared. He felt hopeless and called himself a DDO, or “Daily Drinking Officer” because of his alcohol habit. Clubbing and other social activities involving alcohol became his life outside of work.

Though he tried to stop three times, Peter relapsed all three times, too. He turned to his addiction counselor for help and he advised Peter that he needed to find something he liked doing to help develop a new, healthy habit to help him to quit drinking. After searching online, Peter came across something called parkrun. Lo and behold, there was one near him, in Anacostia (Washington, D.C.).

Peter decided to see if he could re-develop his love of running and attended his first parkrun on May 5, 2018. Peter said that the welcome alone made him feel at home. He kept coming back because he fell in love with the parkrun community. And he has quit alcohol. On August 31st 2019 he will earn a red shirt for completing his 50th parkrun.

In the future Peter will probably alternate wearing his red milestone shirt with his favorite blue t-shirt with “OC” on the front. He sports the shirt at most parkruns, even on the coldest of days. We asked him if there was a backstory and it turns out, there is. 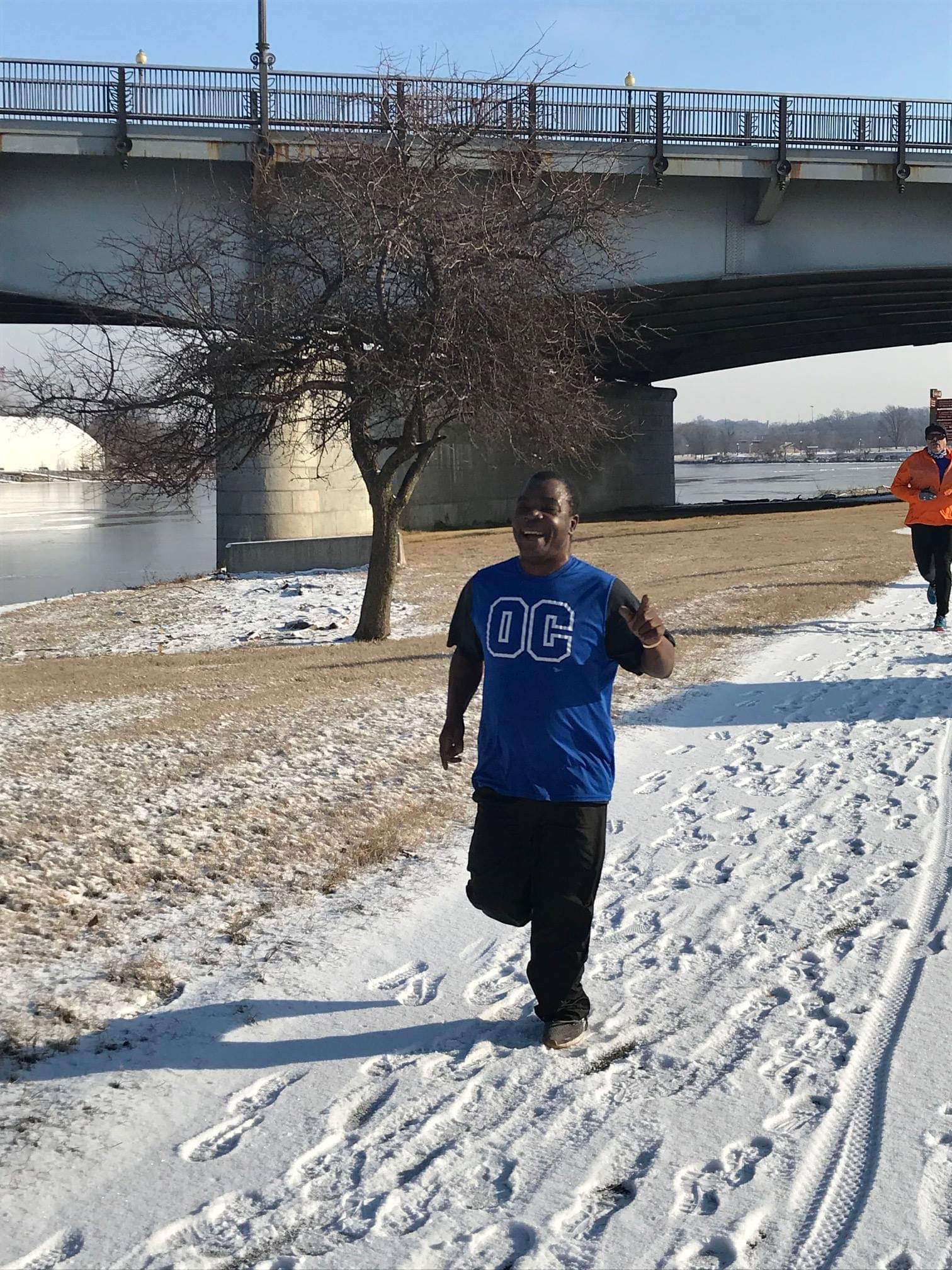 Peter’s blue shirt comes out in all weathers

“On cold days, I always try to break a sweat. By nature, I sweat a lot and I love to sweat. When it’s cold I always try to do something so that I sweat. By wearing a short sleeve shirt on freezing days, the competition is between the body and the cold and I see how far I can go before I start sweating.” The blue “OC” shirt that he wears each week is a nod to fellow parkrunner Ms. O’Connor, who remarked that she was honored that his shirt displayed the first two letters in her last name. “From that day, I got attached to the shirt. It makes me feel that it has a meaning because it made somebody at parkrun feel special.”

Peter is also recognizable for his signature “airplane arms” move. “The airplane arms is a sign of a plane landing. When I was growing up in Kenya, we use to compete running long distances a lot. Before crossing a finishing line, airplane arms was a ‘must do,’ to inform people that you are back and healthy. Back in elementary and high school days, a lot of people used to collapse after long distance running. So the rule of ‘airplane mode’ was introduced among peer groups, as a sign to mean you are fine and having fun.” 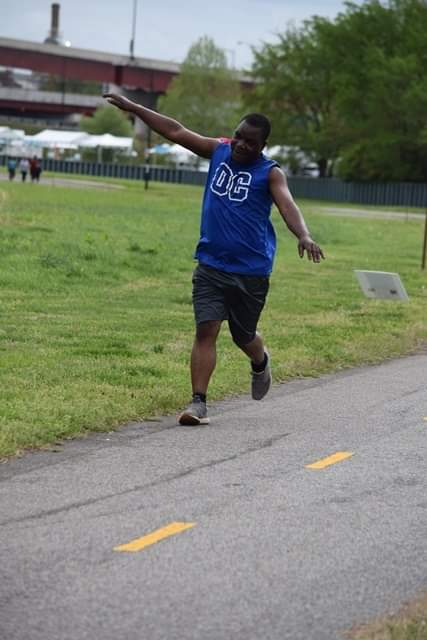 Peter is more than fine these days and he is having a lot of fun. “To me, joining parkrun was a blessing. I found this group at the right time, when I really needed it, and it truly changed my life.”

Peter thanks everyone at Anacostia parkrun for being a part of the community that has made such a difference in his life.  “Anacostia parkrun is not just a group of people who share a common interest, but it’s also a family who cares, cheers, and gets excited to see each other every Saturday morning.”

“Nowadays, this group keeps me moving. It gives me a clear weekend start and I am always eager and happy to meet up with my parkrun family. There is nothing more exciting than meeting up with lovely people with a common interest.” Some of Peter’s parkrun aquaintances have become friends, like Tyrone and Andrew, who he feels free to talk to about anything. He has even introduced several of his friends to parkrun, though some of them run at nearby College Park parkrun since it’s closer to where they live. 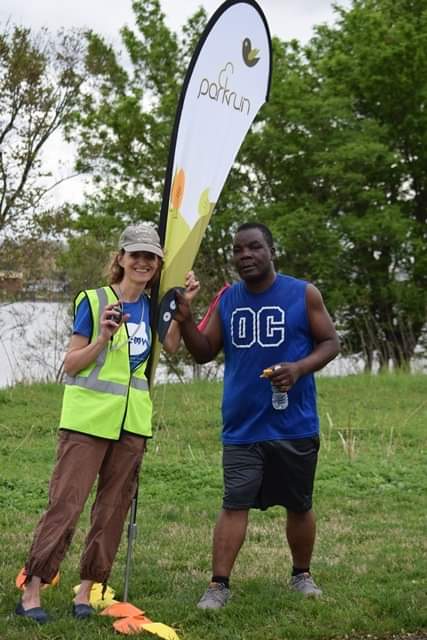 Besides the community aspect of parkrun, Peter enjoys tracking his parkrun times, which helps keep him focused on improvement. “My goal every Saturday is to improve my time and perform better than the week before. It makes me feel productive and like I’m a somebody in the community.” He now exercises 2-3 times a week in addition to parkrun, motivated by his desire to shave seconds off his time.

Peter wanted to share his story because he is proud of  who he is today vs. who he was a few years ago before joining parkrun. “I am proud to have changed my life and I thank God every day. I want to share my life so that people can know it’s not too late to change and it can be done.”

If he had the chance to give advice to someone with an addiction who might not be able to see a clear way out, he shared the following:

“The first thing to realize is, addiction is a disease and selfish. Nobody likes to believe they are addicted. So the first thing I’d do with such a person is to support them and be on their side. Then I’d show them that I was at one time an addict and still consider myself an addict. I’d show them the importance of changing and believing in change. They have to believe they can change and once that feeling comes in, it’s easy to follow it up. It works if they work for it. I’d tell them to always occupy themselves with something and stay away from places associated with the addiction and friends who use.”

Not only does he recommend parkrun to others who may be struggling with addiction, but everyone else, too! “If you are bored, have spare time, are willing to meet new friends who are like a family, or you just want somebody to chat with, this is the place to come. At Anacostia parkrun, it’s not a competition, it’s a place to come and enjoy yourself, run, walk, volunteer or just be a spectator.”

We asked Peter what he would say to someone like himself who used to run but hadn’t in a long time and may be intimidated to start up again. His response: “I’d tell them to visit parkrun just one day. Expecially Anacostia! The welcome alone will make them feel at home. Second, I would let them know that at parkrun it’s not a competition … and nobody finishes last. Do it at your own pace, help others and have fun.”

“Today, I can stand with a smiling face and say “parkrun is a life changer!!!!‘ Thank you, parkrun.” 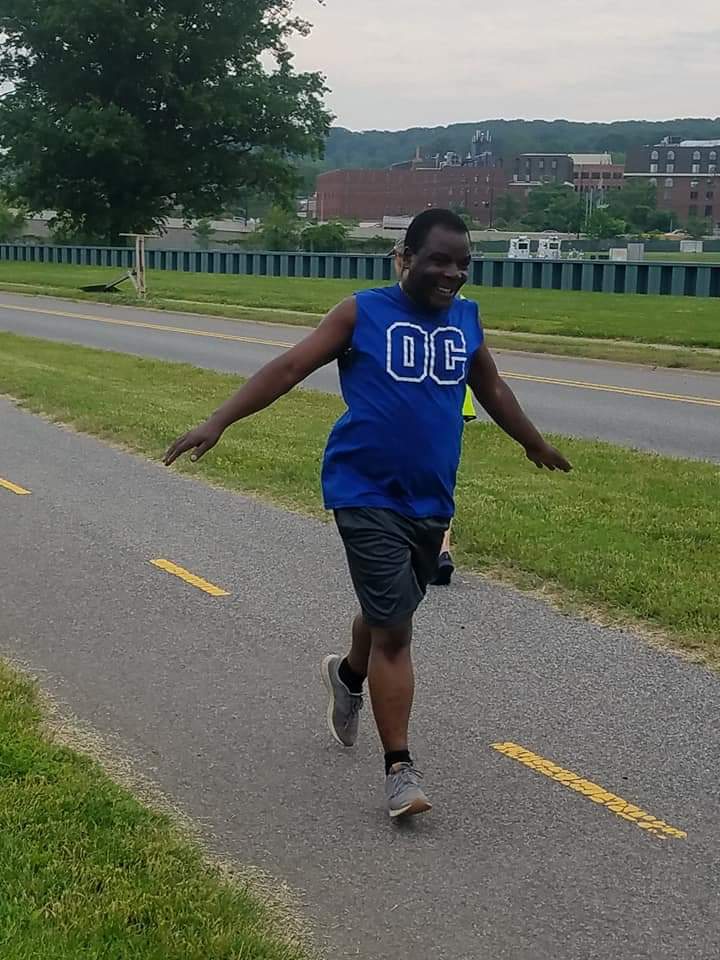