This week we welcomed a new parkrun to our parkrun USA family - Howard Temin Lakeshore Path parkrun in Madison, WI. We also saw more people volunteering and more people coming back to parkrun than ever before.

We love that we are gaining around 2,000 new registrants per month but it’s especially encouraging to see parkrunners coming back. And as always, we are so grateful to our wonderful volunteers who never fail us. 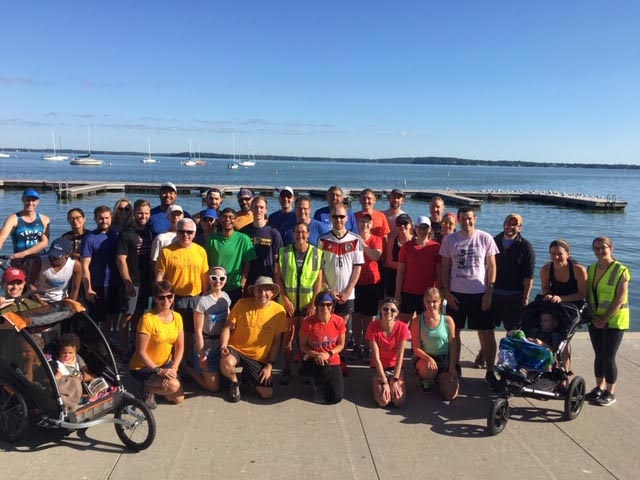 All smiles and blue skies for the Howard Temin Lakeshore Path parkrun inaugural in Madison WI. The majority of the finishers are first time ever parkrunners, though you just might see some familiar parkrun tourists among them! 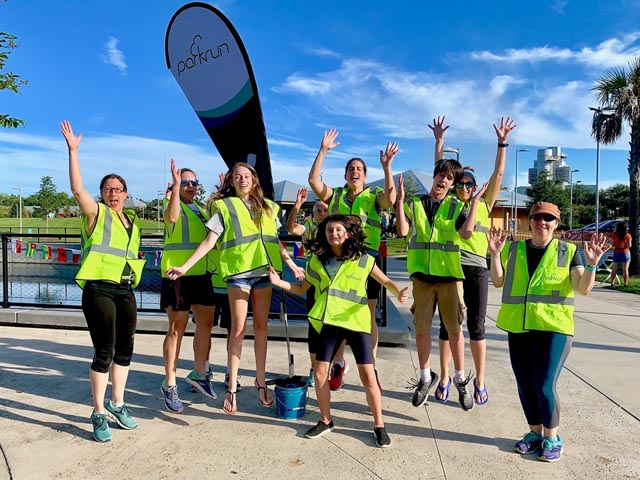 Yay! We smashed our volunteer record this week! This group of volunteers are jumping for joy at Depot Park parkrun in Gainesville, FL.

Included in our record number of volunteers this week was this wonderful crew of happy volunteers at Charleston WV parkrun. 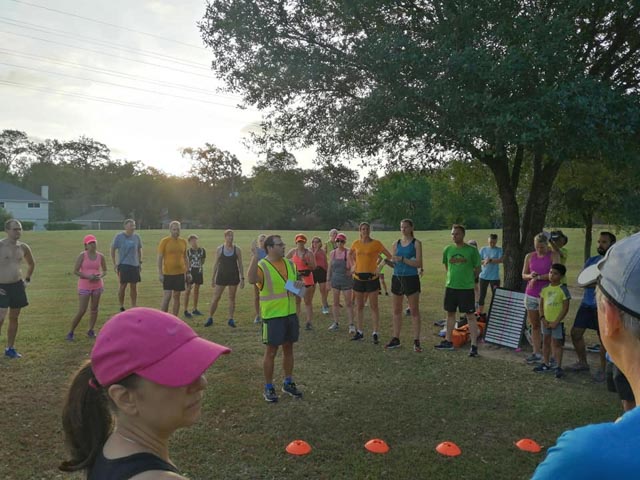 As the sun rose over Terry Hershey parkrun in Houston, TX, run director Paul welcomed a lot of familiar faces – more people than ever before are coming back to this parkrun. Since starting in January, TH parkrun has seen almost 2,000 finishers already. 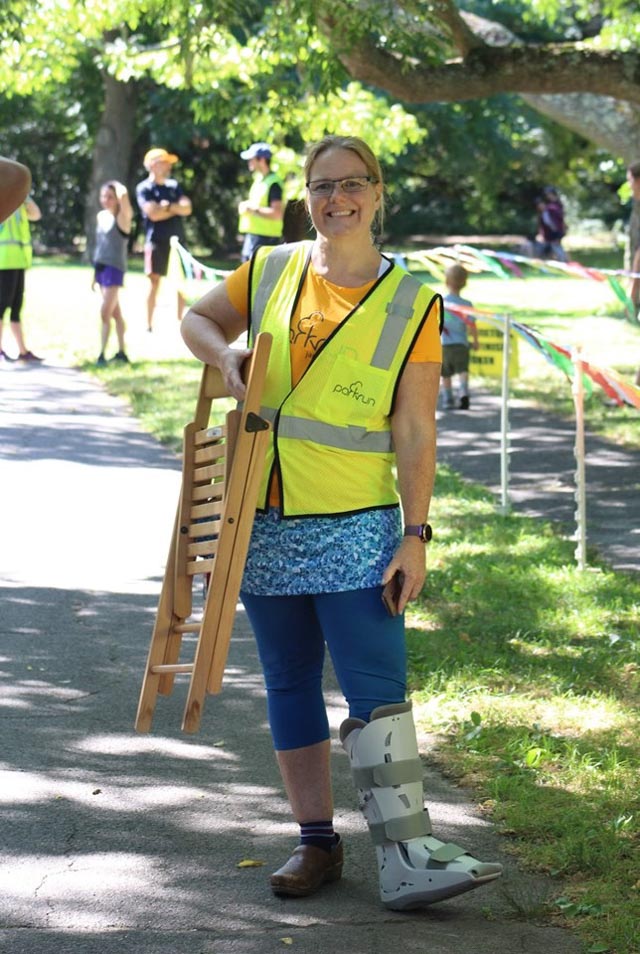 Injuries don’t have to be all bad, they can give an opportunity to volunteer, like at Jamaica Pond parkrun in Boston, MA.

There was parkrun heroism at College Park parkrun from Janet, who showed up at parkrun in her scrubs, fresh from working her nightshift as a nurse. With the parkrun in need of a tailwalker, Janet pulled a yellow vest over her scrubs seconds before the start, and then tailwalked and took loads of great pictures along the way. After finishing she declared: “Now I’m ready for bed!” 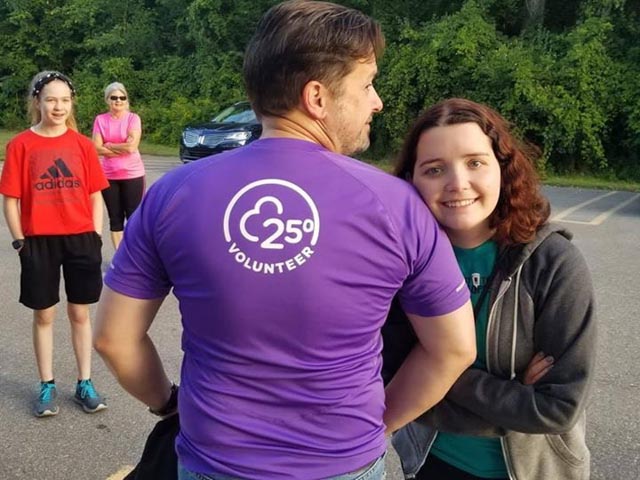 Look very carefully – yes, your eyes are not deceiving you, that is in fact a (temporarily hacked) 250 on that V25 shirt! Wow! Huge congratulations to Spencer Greve at Livonia parkrun, pictured here with proud daughter Katie on his 250th time to volunteer! He is the first person in the US to achieve this astonishing landmark! 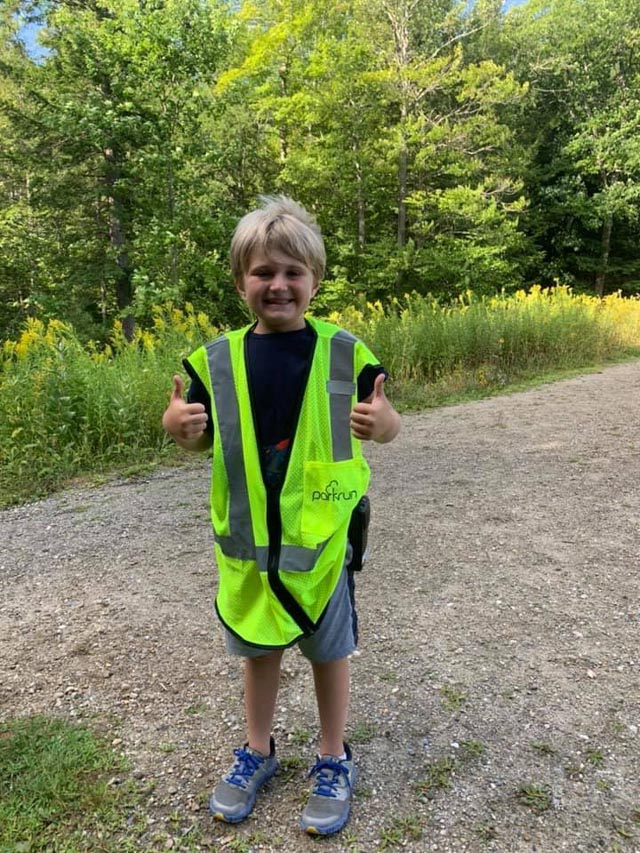 What a happy young volunteer at Marsh-Billings-Rockefeller parkrun in Woodstock, VT! 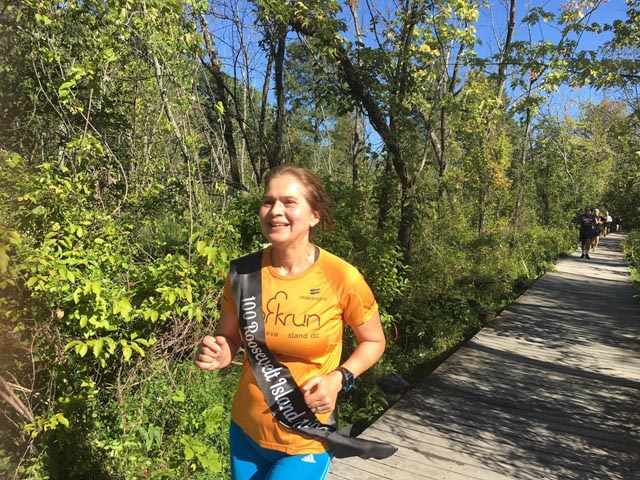 At Roosevelt Island parkrun they celebrated their third anniversary with their founder Svetlana completing her 100th parkrun. Nowadays she’s based in Baltimore and more often visits Leakin Park parkrun on a Saturday. But there was no question that she wanted to return ‘home’ to celebrate this milestone. 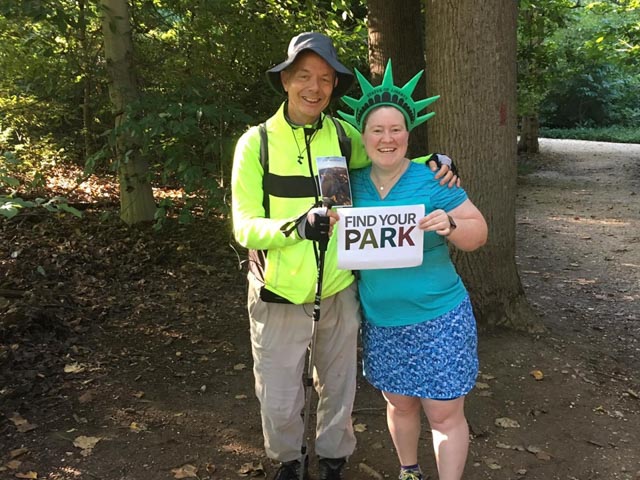 Also at Roosevelt Island parkrun, they had a walking tour and dressed up to celebrate their favorite national parks & public lands in celebration of the 103rd anniversary of the National Park Service on Sunday.

We are so fortunate to be able to hold a number of our free, weekly events on NPS land.

Panic stations at Fletcher’s Cove parkrun when both scanners unexpectedly failed. They quickly shifted to ‘manual mode’, and results processing was completed successfully by some very dedicated processors! 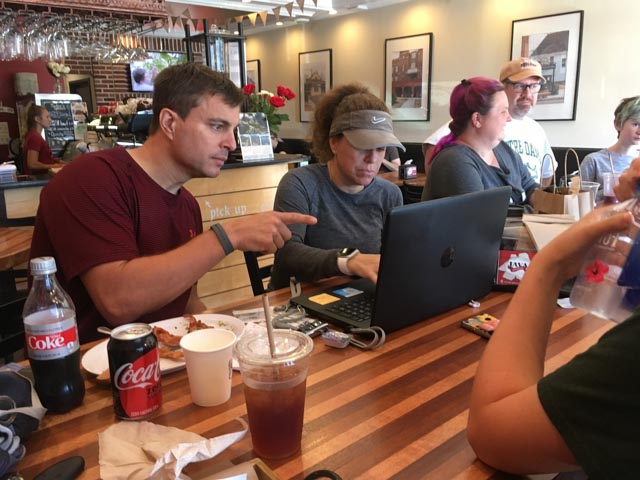 No such trouble at Kensington parkrun. We love to see volunteers bravely undertaking new roles and Emily did results for the 2nd time and did a fantastic job! Assistant Greg reported that she was flying solo for nearly all of it. 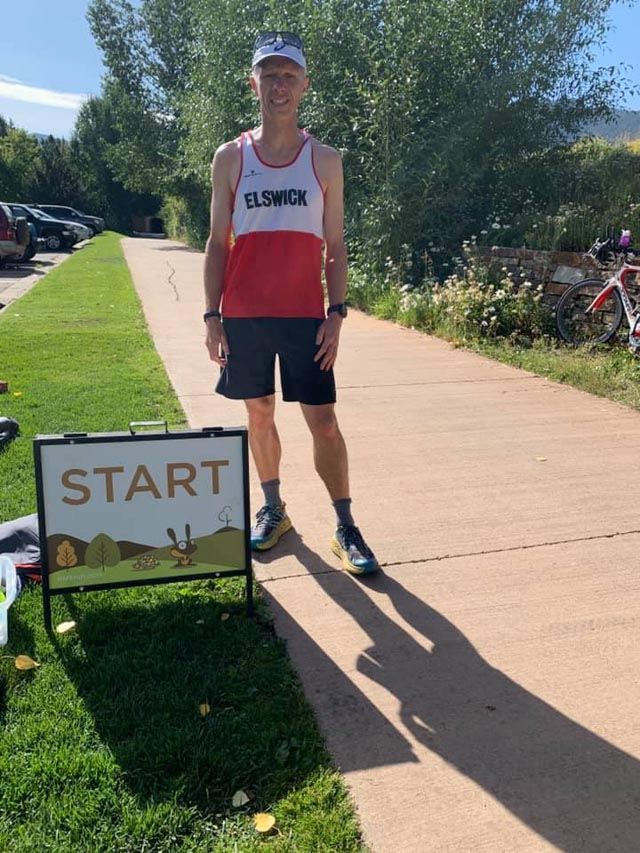 At Aspen parkrun UK visitor Daniel notched up his 150th parkrun AND he ticked off two firsts from his parkrun list … highest parkrun in the world, and a parkrun starting with “A”. (Yes, for some people that’s a thing.) Nice work Daniel! 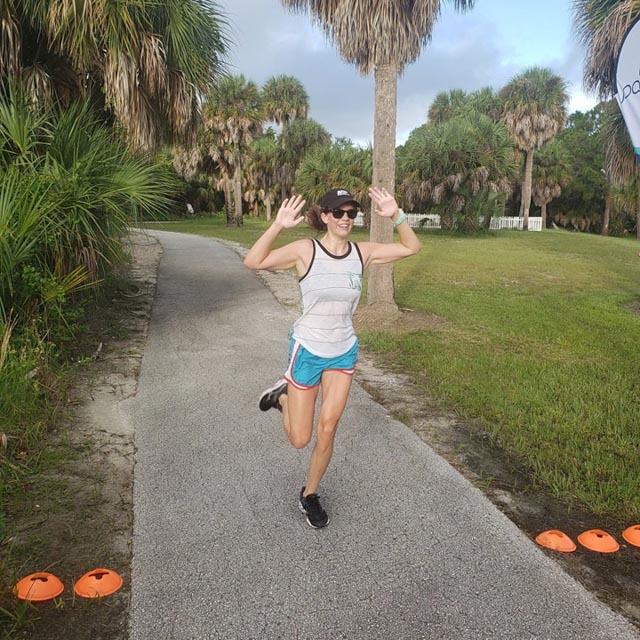 It is a run and not a race, but we all are winning when we participate at parkrun, just like this runner at Weedon Island Preserve parkrun in St Petersburg, FL. 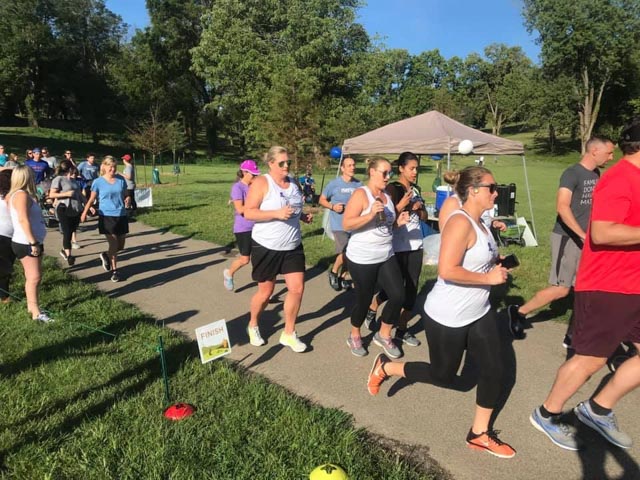 Plenty of visitors at Joe Creason parkrun, including a bachelorette party!

Amazingly, one quarter of the field at Anacostia parkrun in Washington, DC were under 10 years old this week! Fall cross-country season is coming along, and many events are seeing younger parkrunners coming along to get their training in gear.

Congratulations to Barbara Robben on her VW85-89 age-group record at Crissy Field. As the oldest woman to complete a US parkrun, Barbara sets a record every time she scans her barcode.

Running or walking, all are welcome, no matter their size or ability. At Leakin Park parkrun each step is a big step (even if they are baby steps). 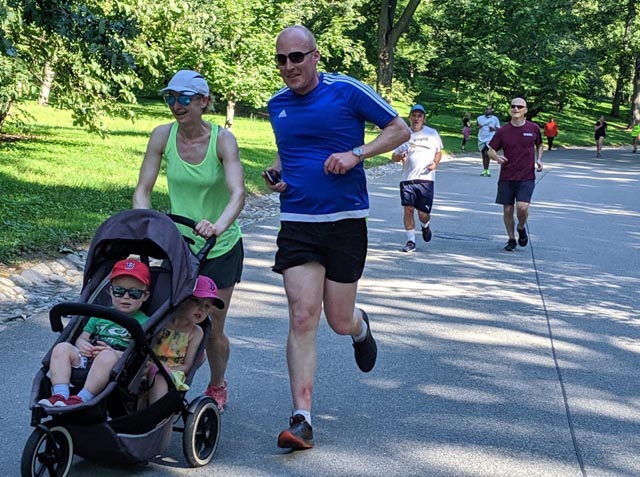 There were 99 participants at Jamaica Pond for the third time this summer- including this happy family! 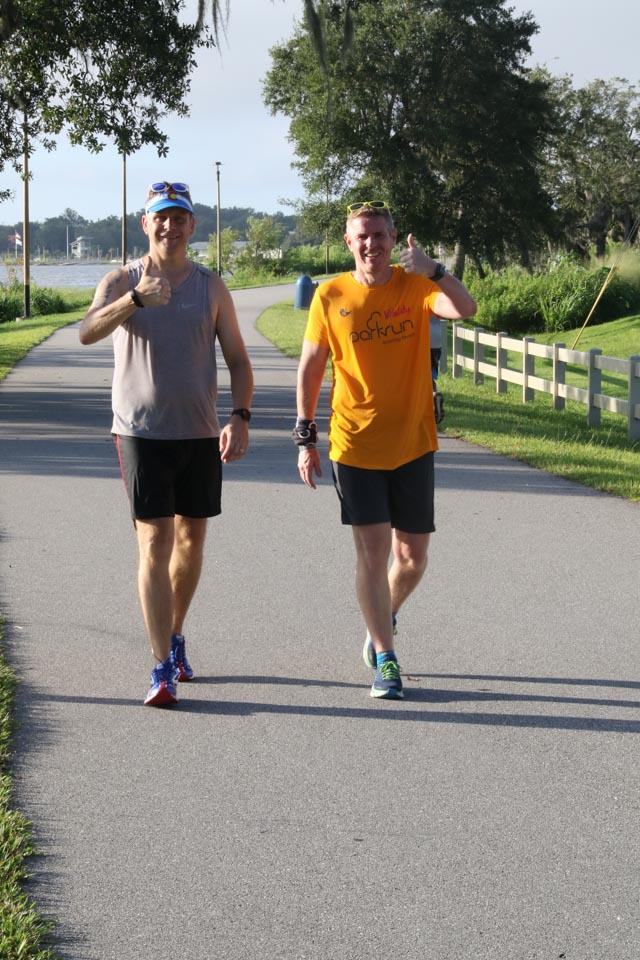 The seal of approval for Clermont Waterfront parkrun. 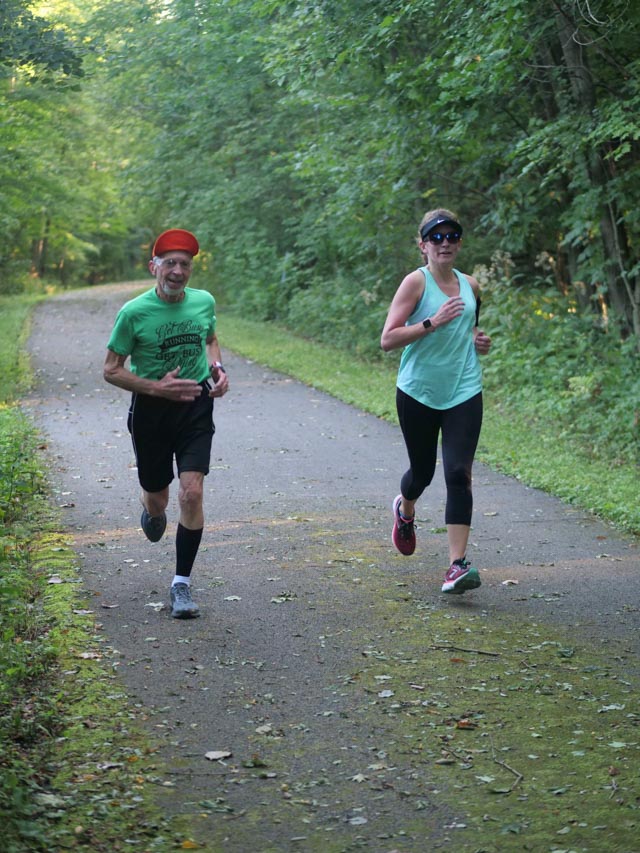 At Mansfield OH parkrun, Lana paces her father, and trail angel, Wes, to another PB! His wife and granddaughters also join him for parkrun most weeks. Wes cleared multiple trees from the trail after storms this week so the parkrun could go ahead, and he was celebrating his 50th time volunteering. Thanks, Wes! 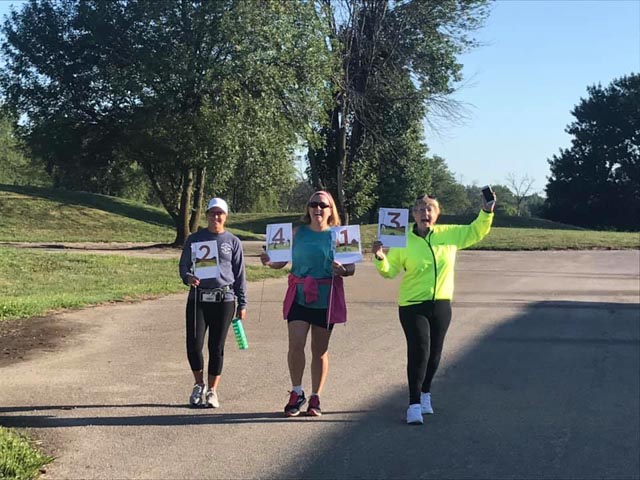 Bringing up the rear with the tail walkers at McAllister parkrun. Thank you to volunteers Lisa, Jill and Pat. Jill was the 25th different volunteer at this new event in Lafayette, IN. 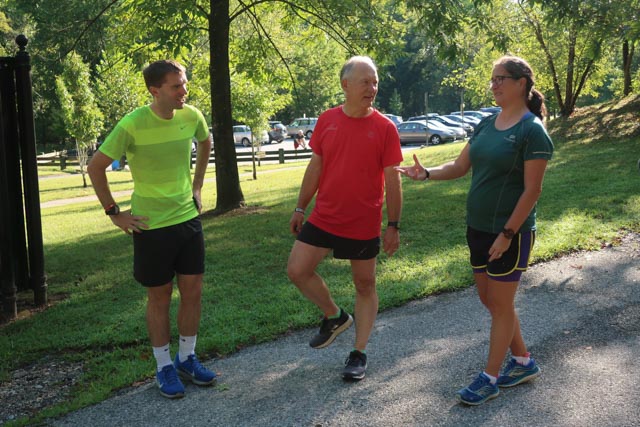 Tourism from across the globe and across the region at Leakin Park parkrun – Jacob, Michael, and Karen represent almost 750 parkruns among them. Wow! 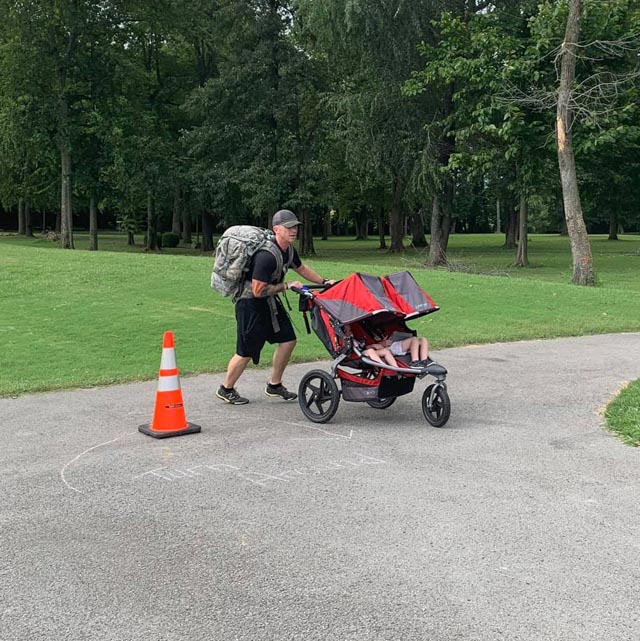 Two kids and a backpack at Oak Grove parkrunThat’s either a lot of diapers, or training for something big!

Happy to be last at Perrigo parkrun in Redmond, WA. Tailwalkers rock! 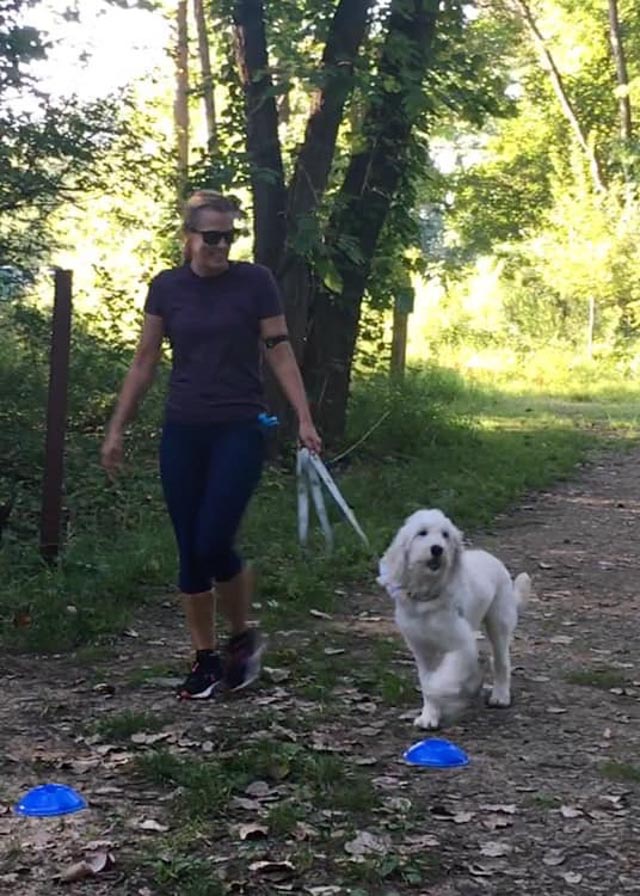 Irene and Will enjoying the cooler weather at Sippo Lake parkrun in Canton, OH. 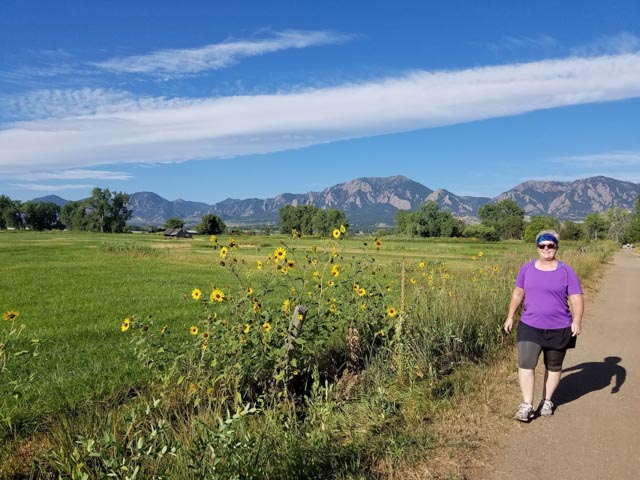 Another bad weather day in Boulder 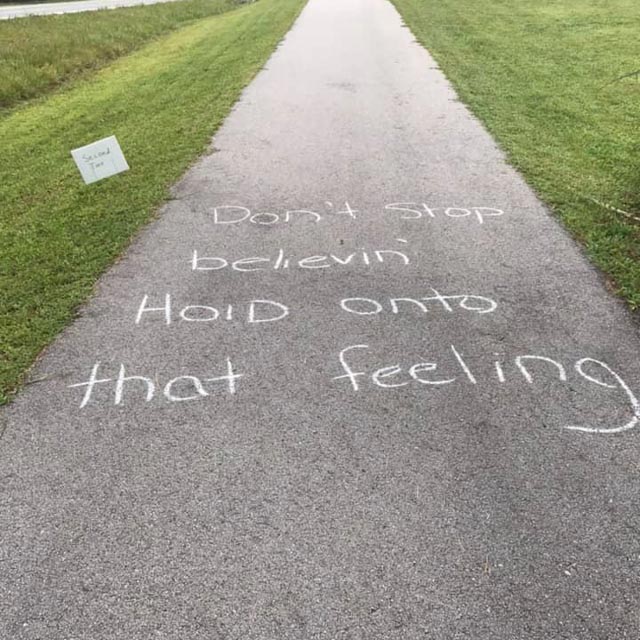 A reminder from Mountain Goat Trail parkrun of that wonderful feeling we get from parkrun!

‘Hold onto that feeling’ til next week!