Just a few days after many parkrun communities held extra Thanksgiving events, the usual Saturday parkrun activities resumed all around the country.

As usual, there were celebrations of milestones, families getting active together and smiling volunteers who helped to make each event possible. 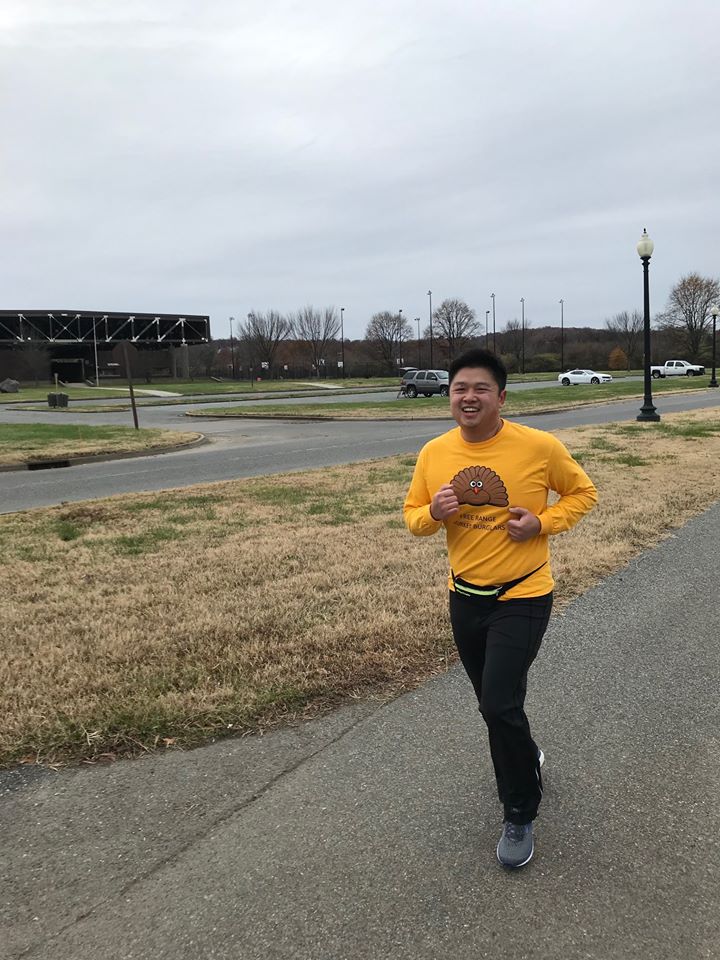 Sherwin sported a whimsical turkey shirt and a big smile at Anacostia parkrun in Washington, DC just a few days after Thanksgiving. 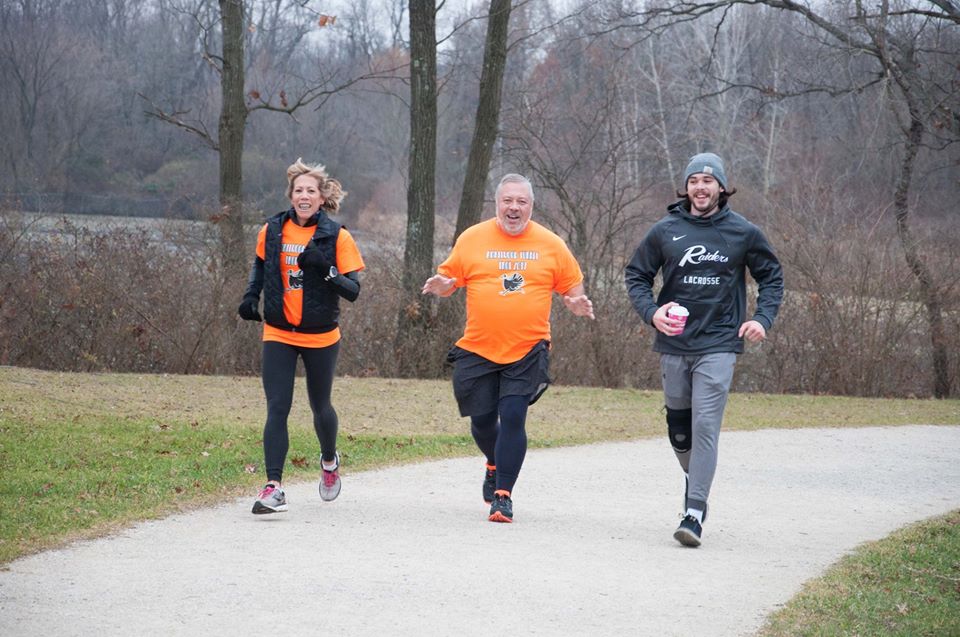 There were also a few turkey shirts at Sippo Lake parkrun in Ohio. 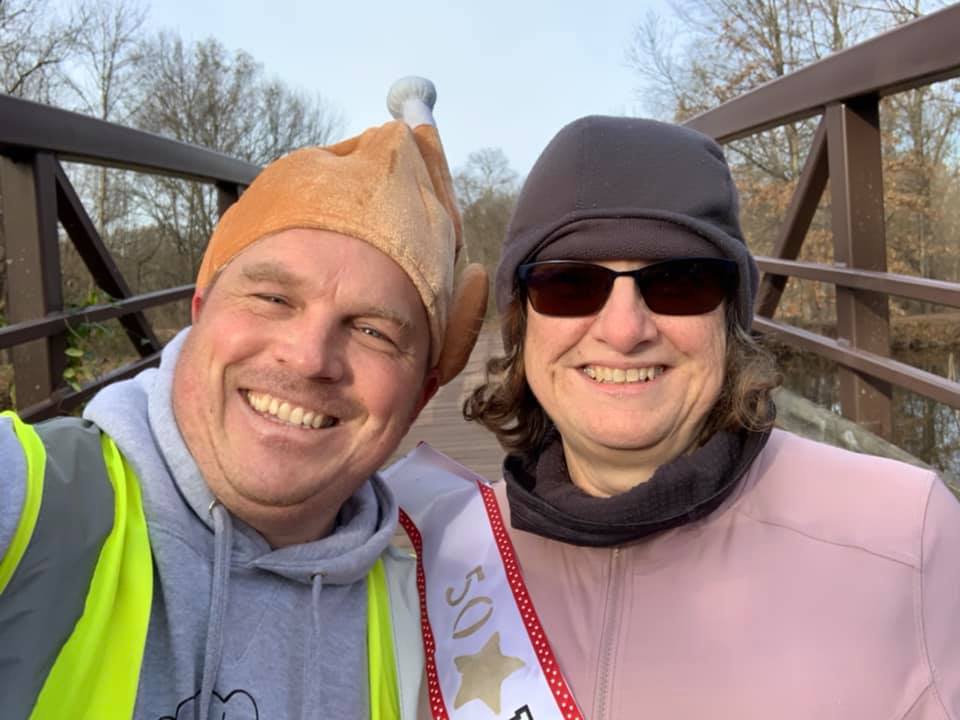 And we spied Event Director Rory in a turkey hat at Delaware and Raritan Canal parkrun in New Jersey. He posed for a picture with Luann, who is the second local at DR&C parkrun to reach the 50 milestone! 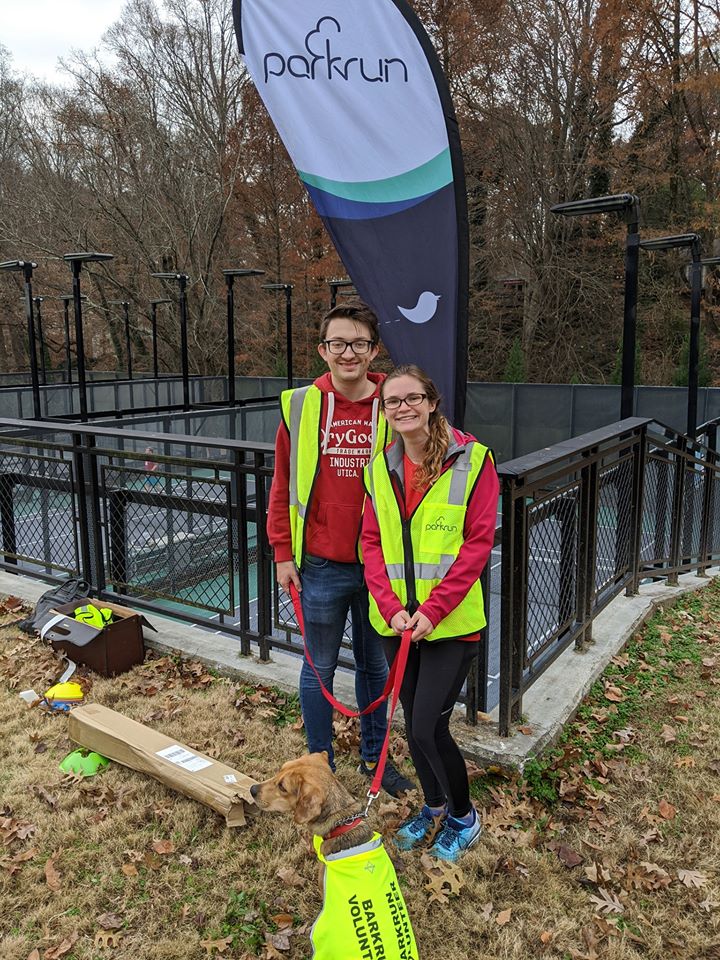 But the coolest piece of parkrun garb that we saw in event photos this weekend was this barkrunner volunteer vest at Northside Beltline parkrun in Georgia. 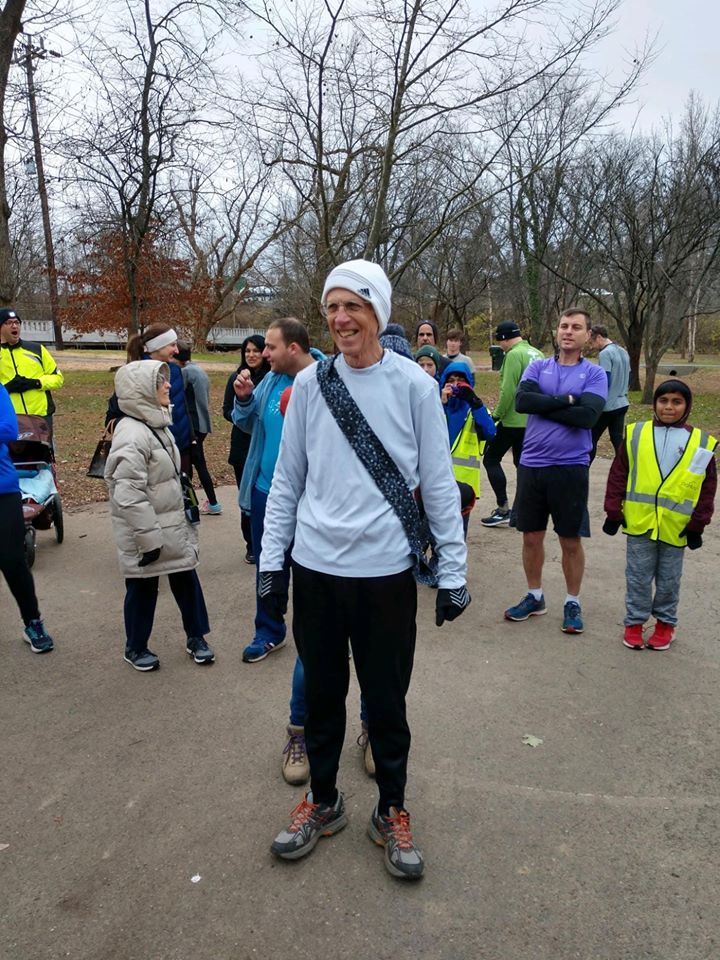 Kensington parkrun in Maryland celebrated its first 100 milestone. Congratulations to Timothy for claiming the honor. They were also excited about having visitors from Jamaica Pond parkrun in Boston, Roosevelt Island parkrun in DC, and Connecticut & Clarisford parkrun in County Clare, Ireland. 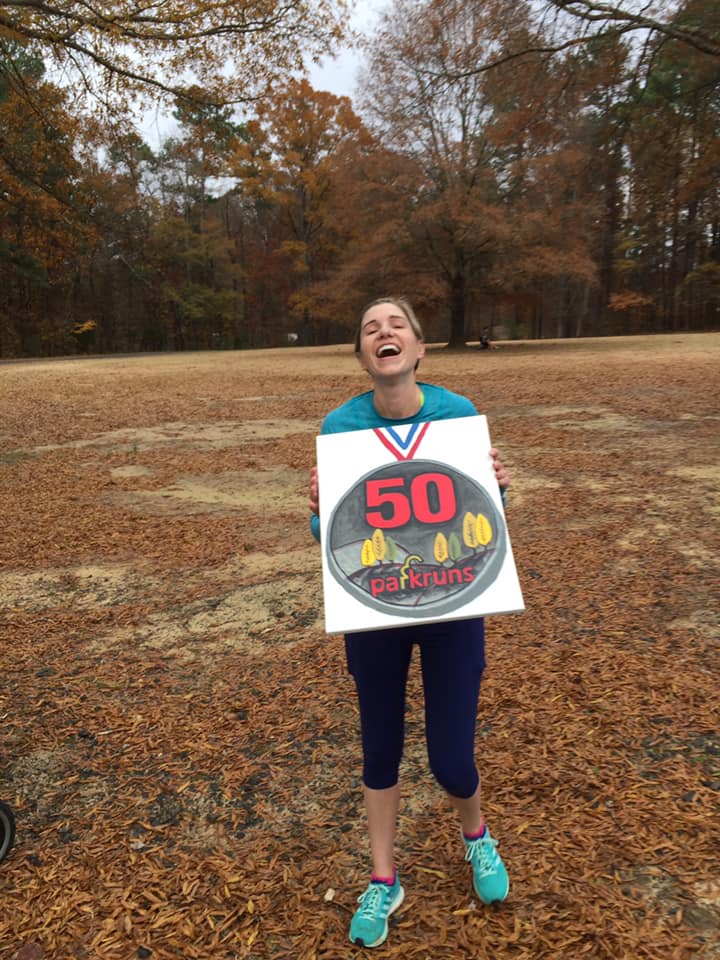 Shannon was excited to reach her 50th milestone at Durham parkrun in North Carolina. 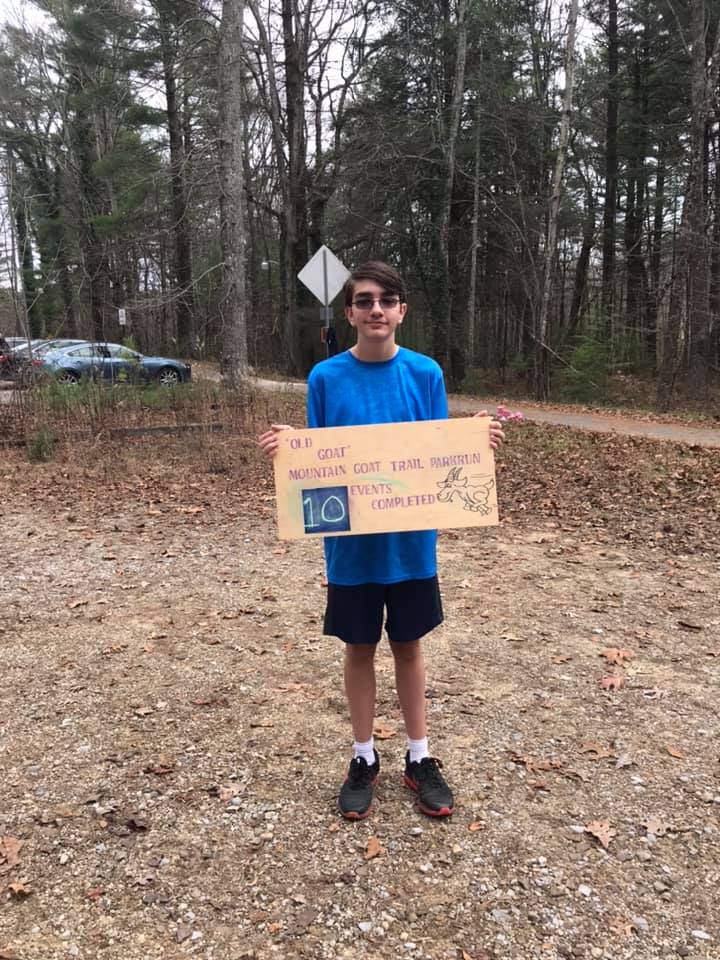 Congratulations to Ethan at Mountain Goat Trail parkrun in Tennessee for completing his 10th parkrun AND clocking a PB in the process. 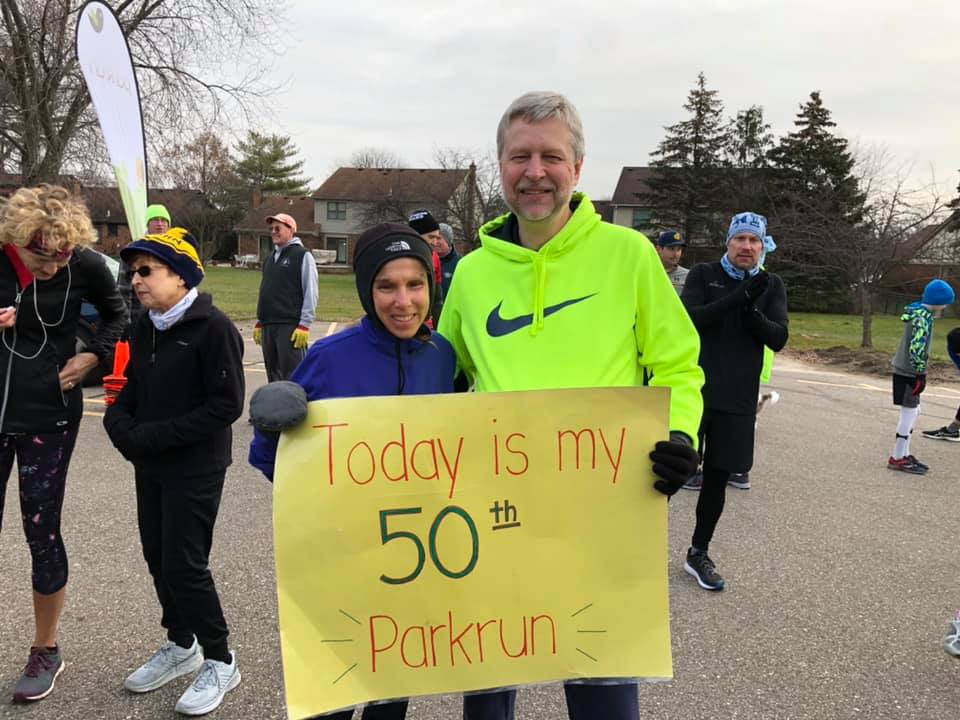 Two more parkrunners, Tracey and Ian, joined the 50 club at Livonia parkrun in Michigan on a cool cloudy day. 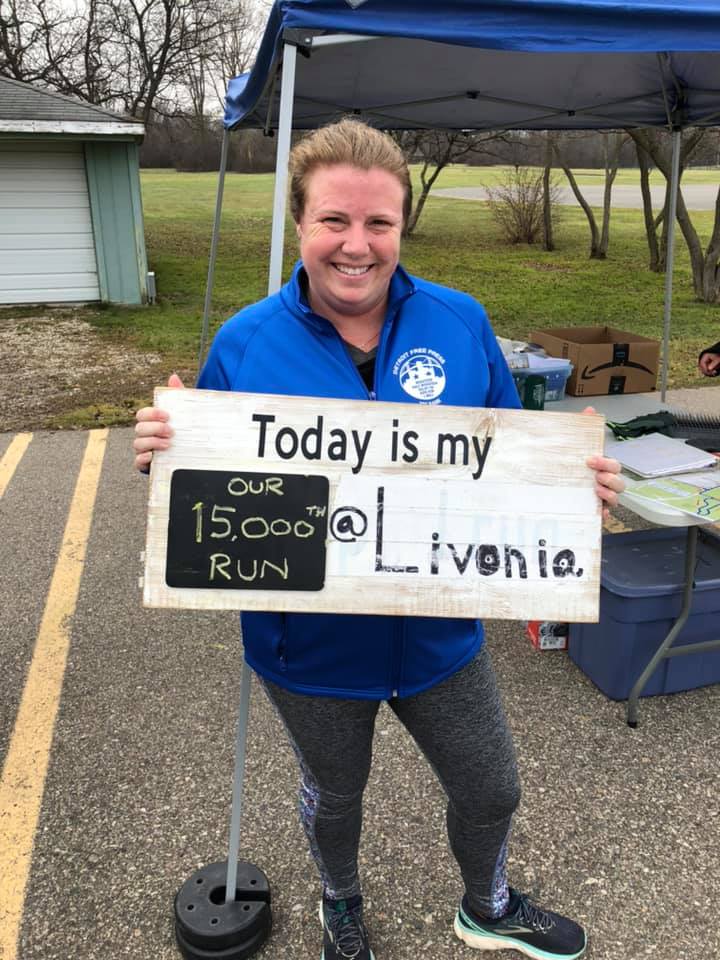 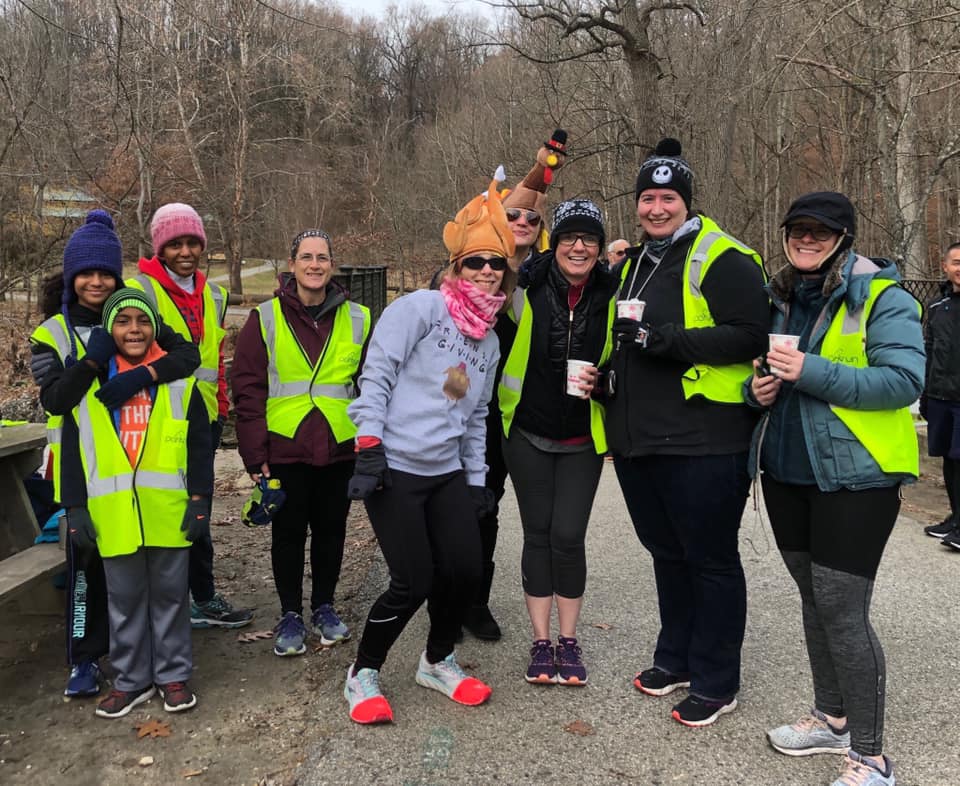 Leakin Park parkrun in Maryland broke the 50 attendee mark for the second week in a row with 53 finishers (plus 16 volunteers-wow!) Their partnership with the Catonsville Moms Run This Town group helped contribute to the boost in numbers this week. Prior to last two weeks, the attendance record sat at 49 for 89 weeks. 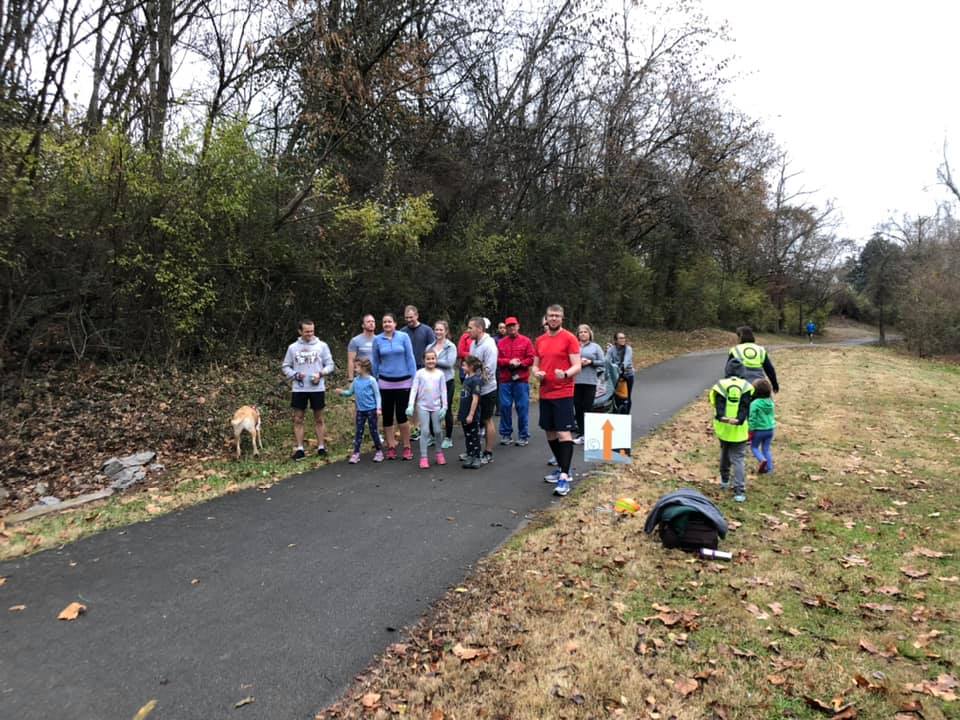 The crew at Third Creek Greenway parkrun in Tennessee was utterly delighted that it didn’t rain after last week’s washout. They welcomed the Holdcroft and Heck families, visitors from overseas who were en-route to South Carolina from Indiana. They perfectly timed a break in their road trip to stretch their legs at their first US parkrun. How efficient! 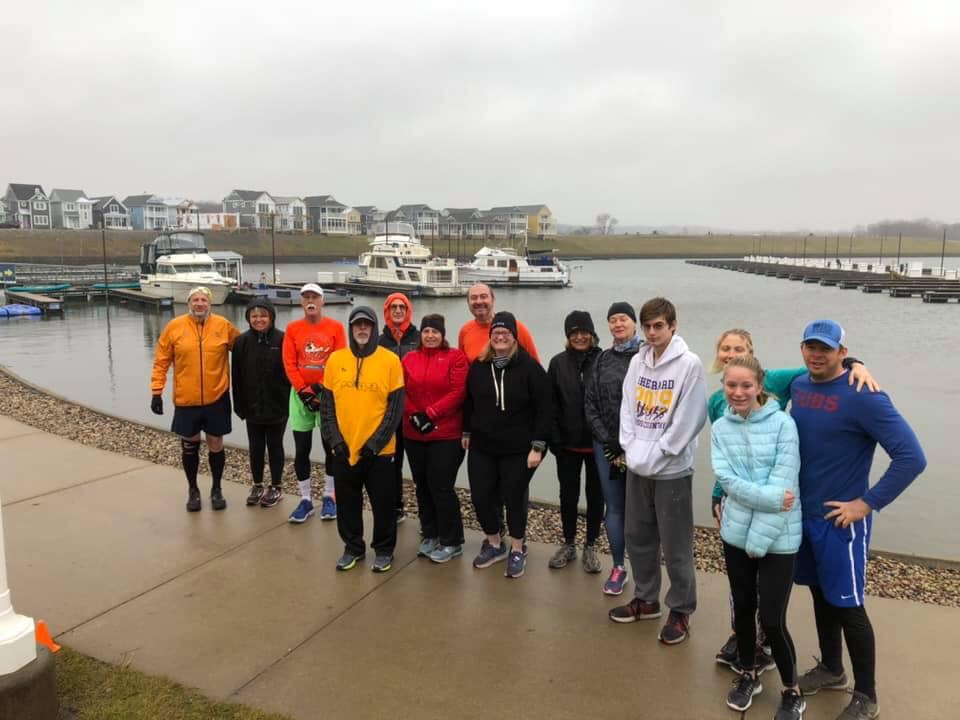 The crew at Heritage Harbor parkrun in Illinois was happy that the rain mostly held off for their parkrun, too. After all, it would just be rude of Mother Nature to rain on Rosy, parkrun mega-tourist and spreader of cheer wherever she goes. 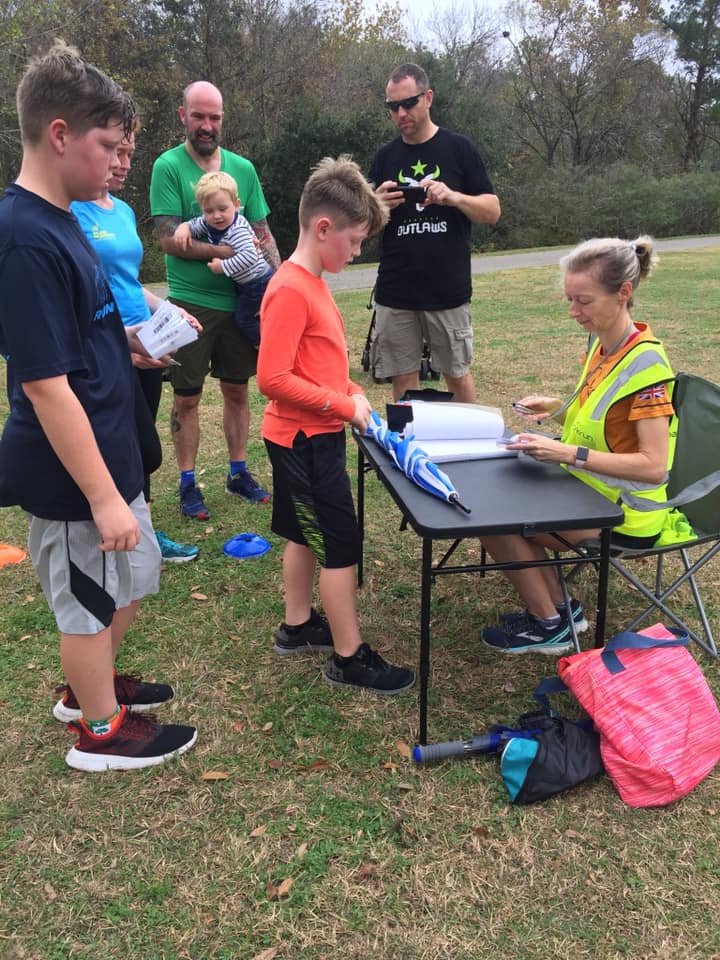 Terry Hershey parkrun in Texas was overcast but hot and humid, making for an unusually sweaty group of participants for this time of year. But, they were a happy group! 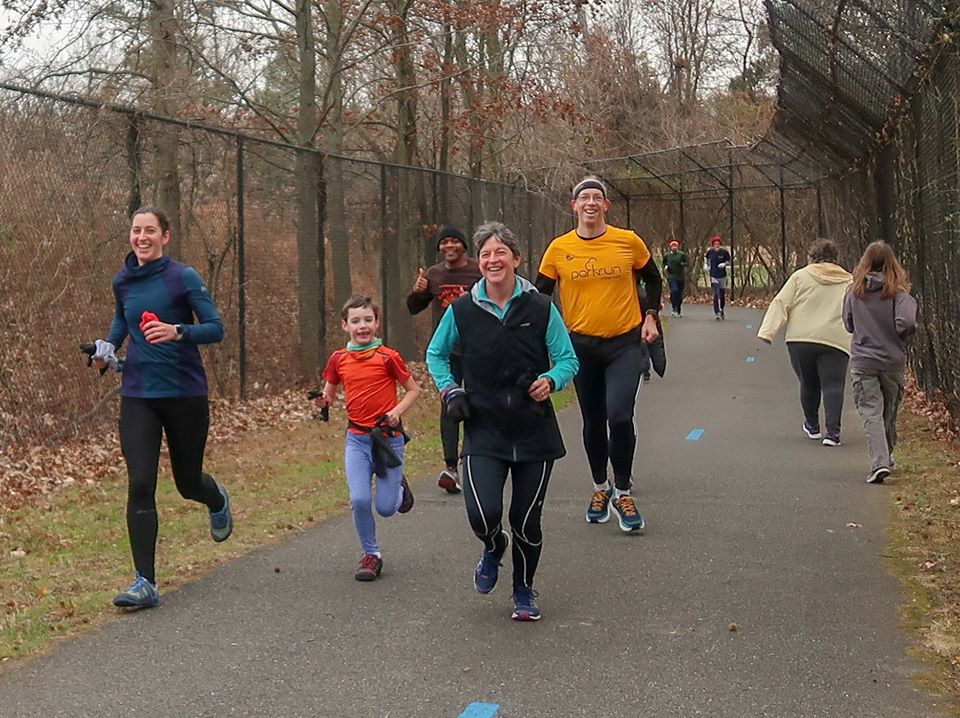 Event Director Colin Phillips wrote “My parkrun morning in College Park was GREAT. First parkrun in a month, testing recovery from injury. My slowest parkrun time yet, but I got to run with new 100-clubber Xander (and his mom and grandma), and we had a great conversation about Thanksgiving fun and about learning to fly.” 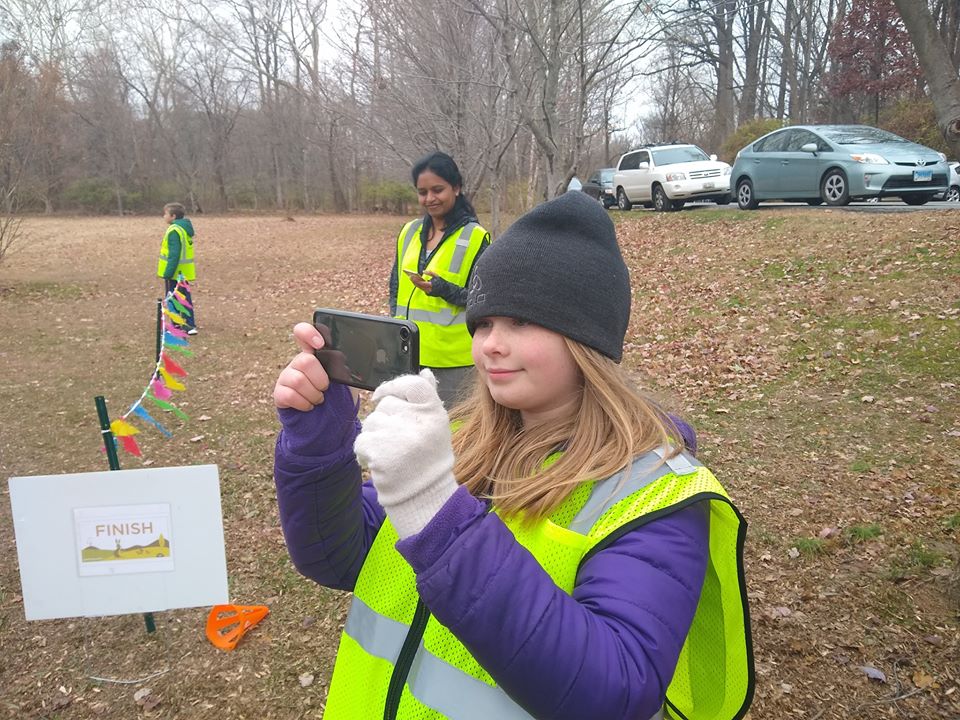 There were TWO photographers at Kensington parkrun in Maryland this weekend. And both were youth volunteers. Together they took over 400 photos that captured so many of the wonderful moments that happened in the span of just two hours. 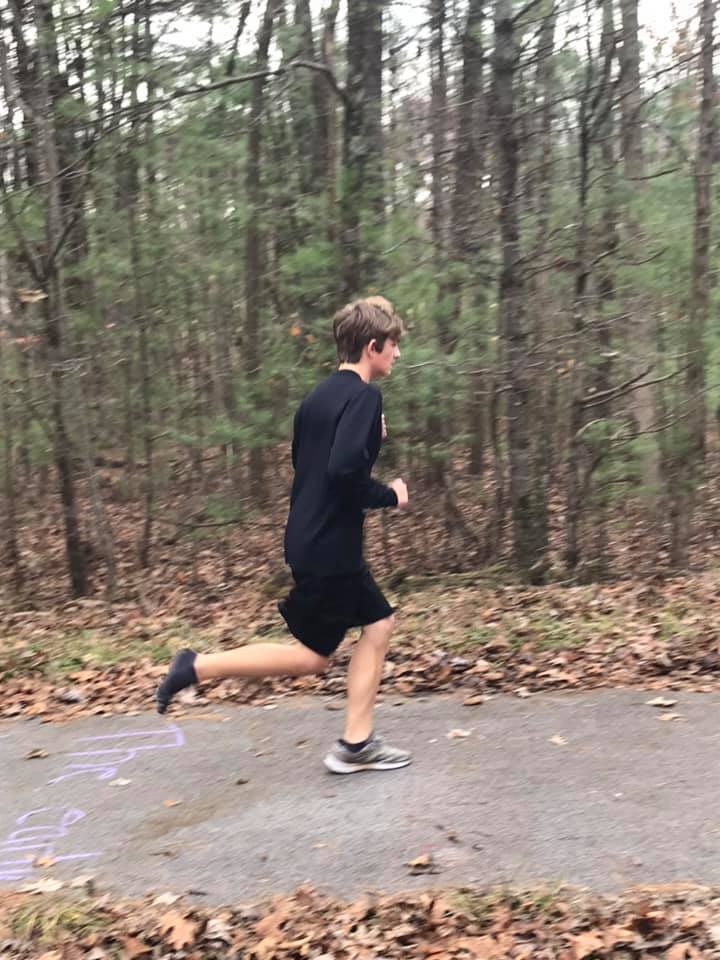 Sometimes you just really want to finish your run. This parkrunner at Mountain Goat Trail parkrun in Tennessee somehow lost a shoe about a mile into the course and though his parents entreated him to stop, he kept going and finished, seemingly no worse for wear. Oh, and he got a PB. Go figure. 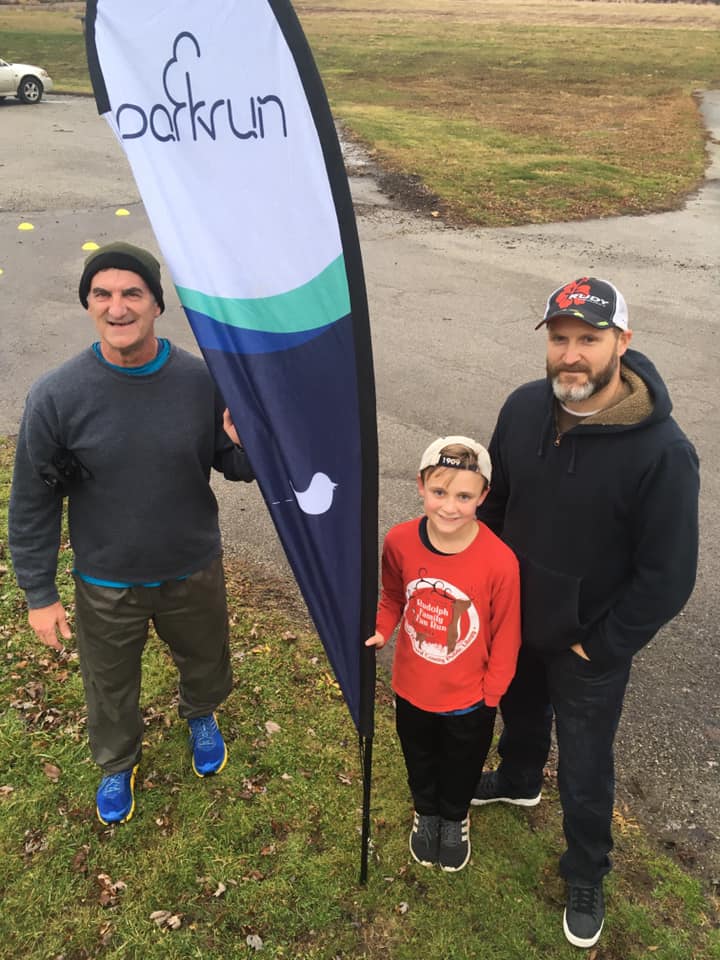 McAllister parkrun in Indiana welcomed several first-timers, among them a speedy 11-year-old who brought smiles to everyone’s faces. 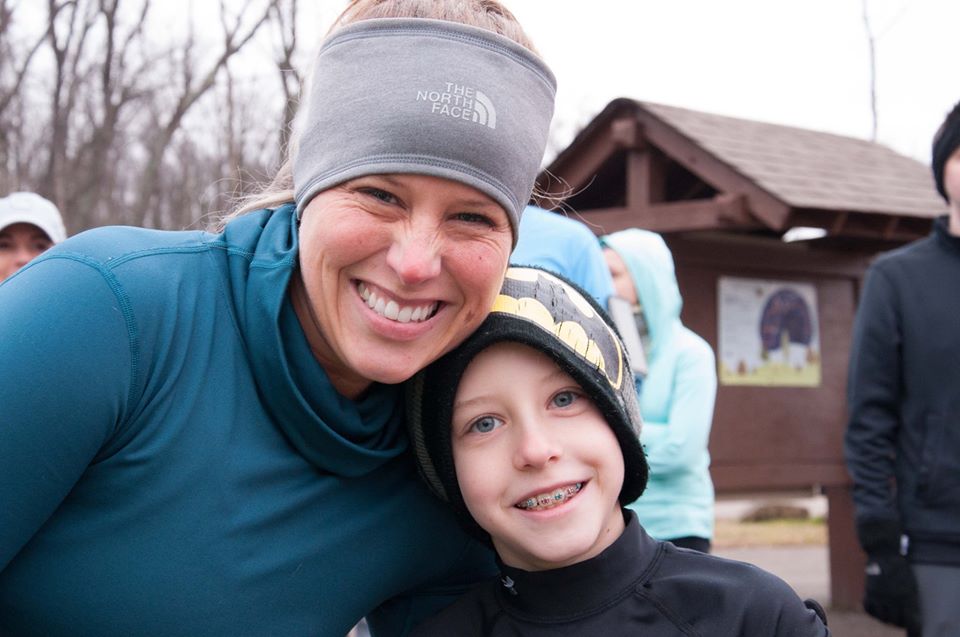 Speaking of smiles…Amy and Cooper had big smiles for the camera at Sippo Lake parkrun in Ohio. 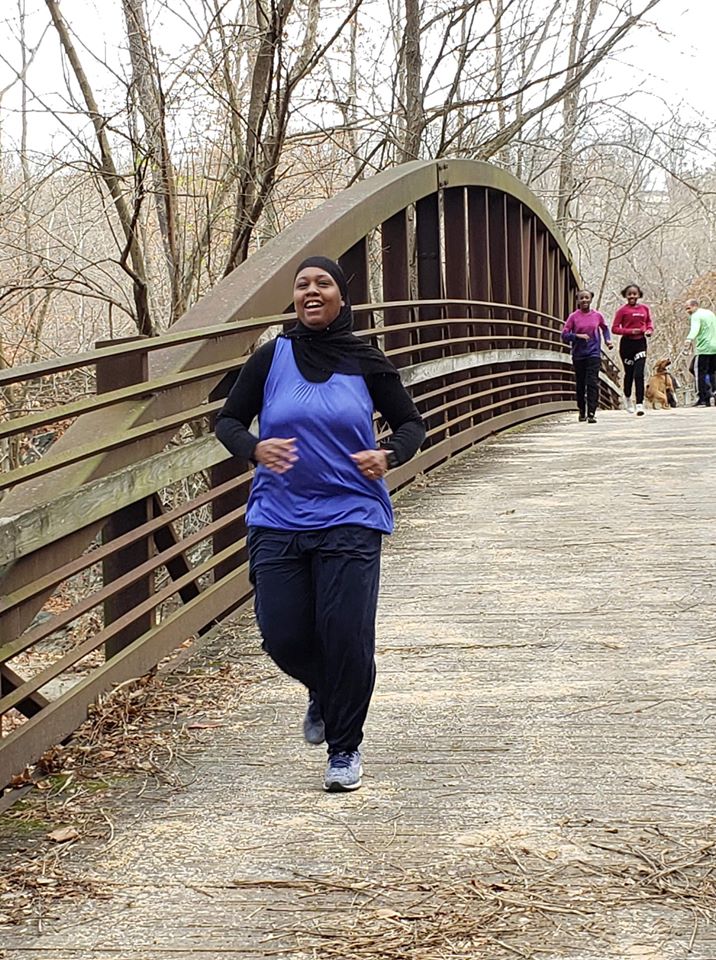 A scenic bridge in a beautiful park combined with a spot of downhill running = happy parkrunners like this one at Leakin Park parkrun in Maryland. 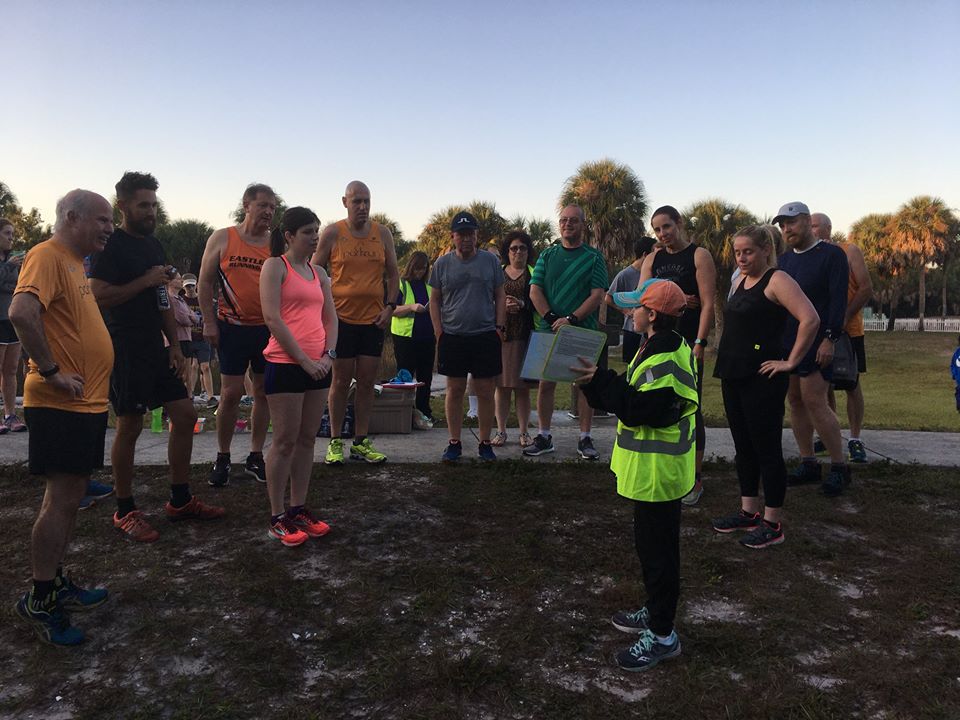 Something was in the air at Weedon Island Preserve parkrun in Florida as both the men’s and women’s course records were broken at their 28th event. Maybe it was youth Run Director Josilynn’s entertaining first-time and pre-run briefings? 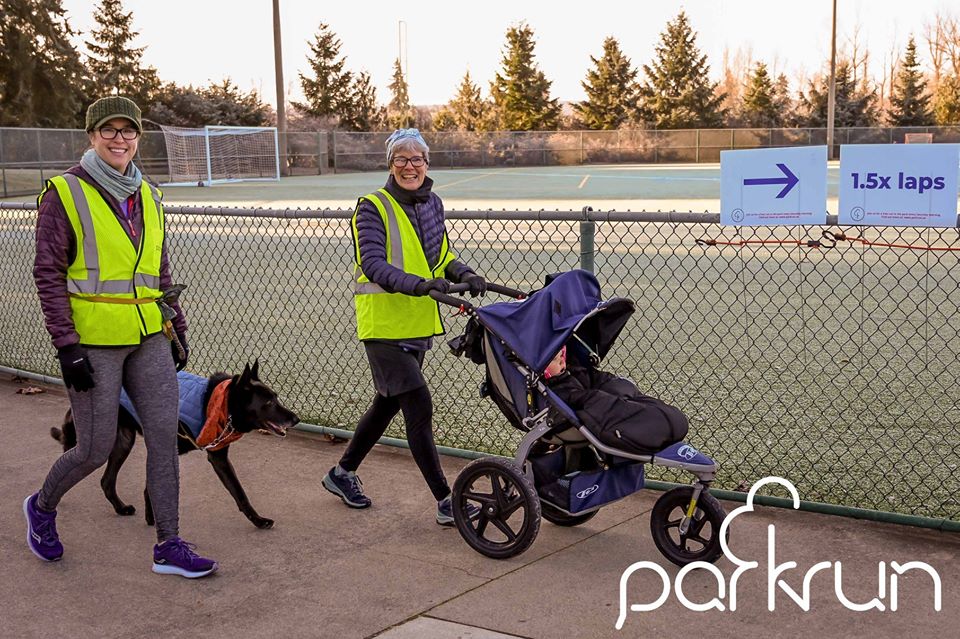 The Nathan family made up 50% of the volunteer roster at Perrigo parkrun in Washington on a frosty parkrunday. Lee was a barcode scanner, Amanda and Markie were tail walkers and Keith was the photographer, who snapped this photo. 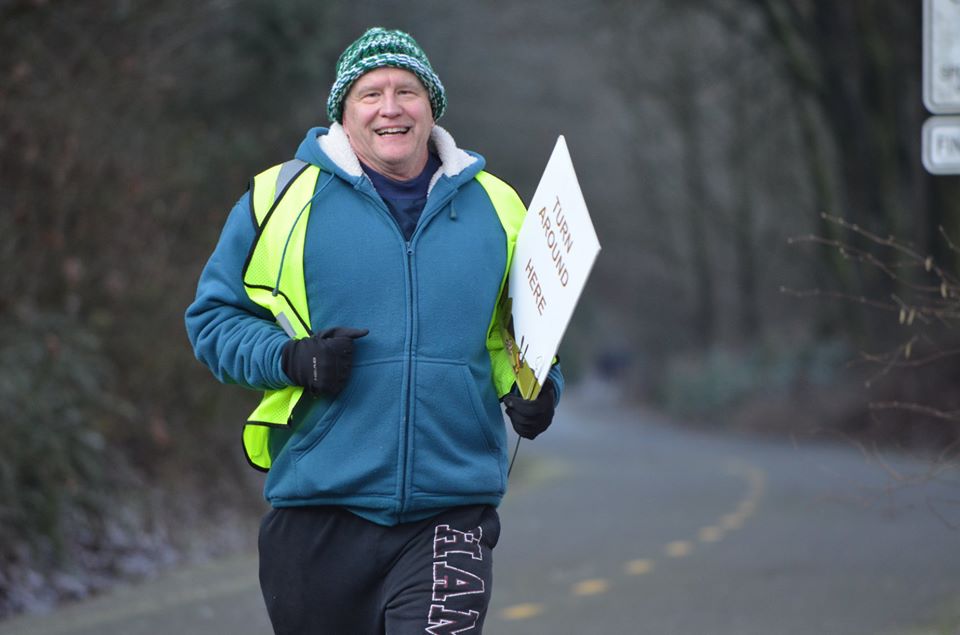 It wasn’t any warmer 45 minutes away at Renton parkrun in Washington. Tail walker Matt ended up running most of the course to keep up with the participants, who were motivated to get out of the cold. Matt started off at Des Moines Creek parkrun but moved to Renton and has been part of their crew since. They get to see this high-vis, high-wattage smile combo frequently, as he steps up to volunteer on a regular basis. 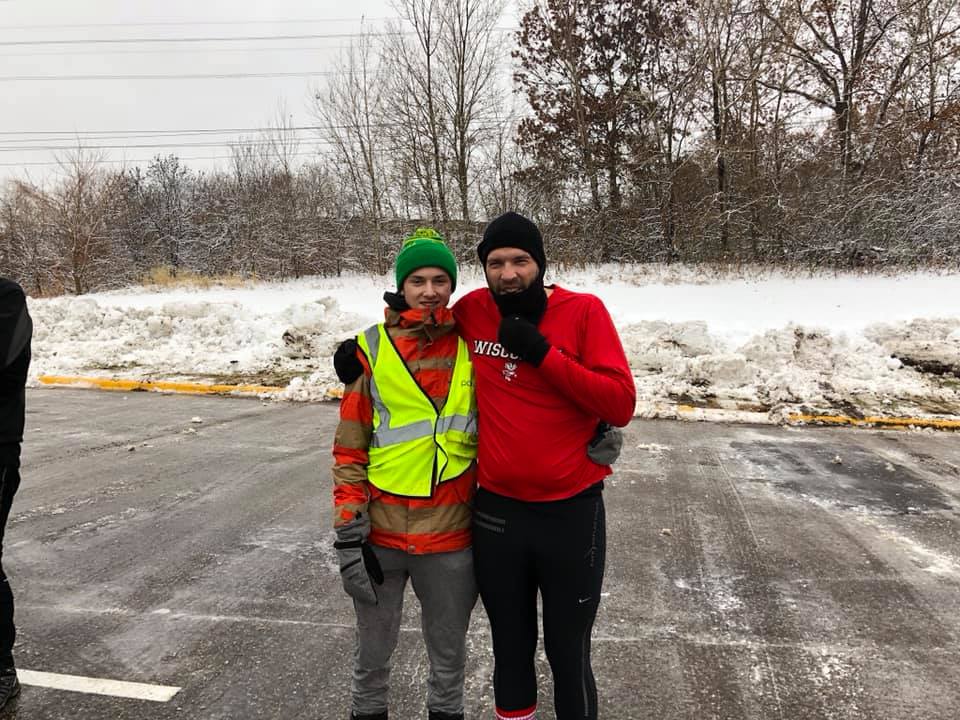 Eagan parkrun in Minnesota battled even more challenging conditions which included cold, wind, sleet and snow. However, they also reported smiles on the faces of the finishers and gave a special shout-out to their hardy volunteer crew. 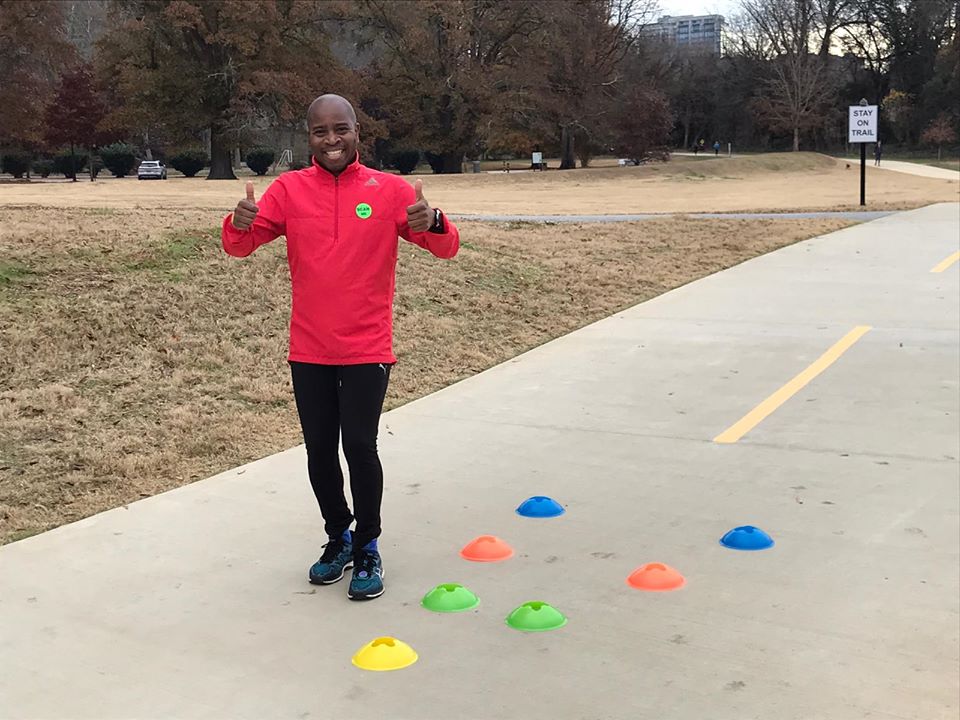 Conditions at Northside Beltline parkrun in Georgia were a bit more favorable, earning a double thumbs-up from this participant. 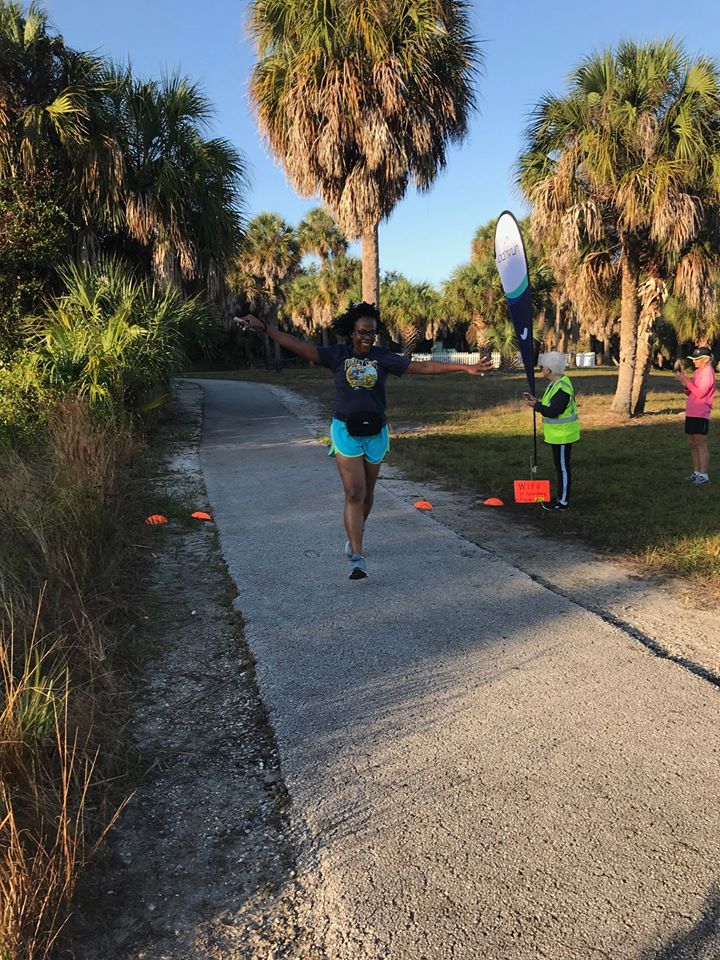 And at Weedon Island Preserve parkrun in Florida they enjoyed mild temperatures, too. 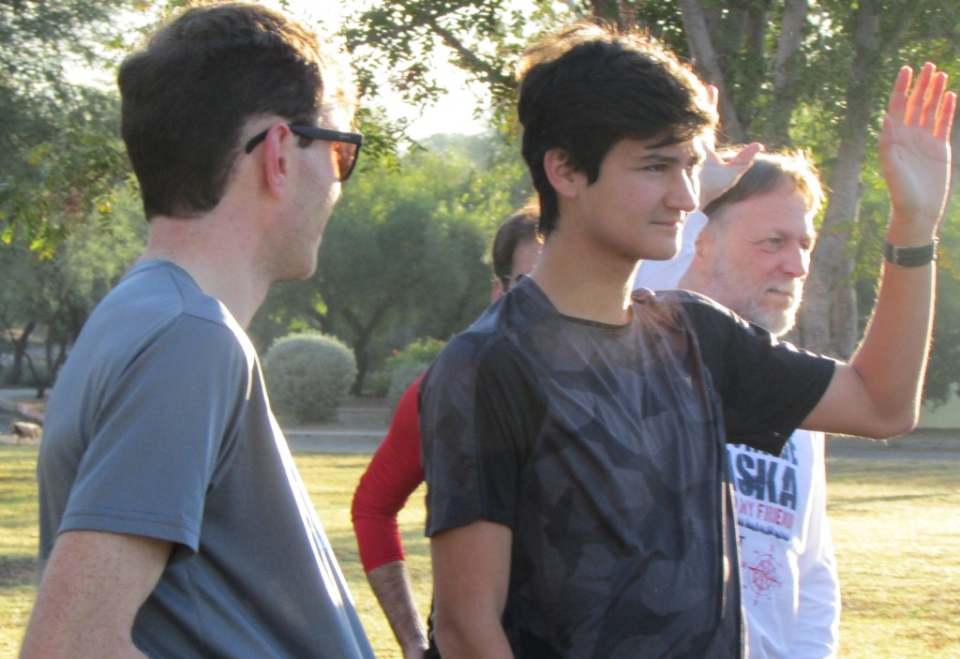 Nick raised his hand as a first-timer at Himmel parkrun in Arizona, however he mostly parkruns in the Seattle area. We think he may have been bitten by the parkrun bug, as he just started parkrunning in May of this year and has already been to 6 different events in the US. 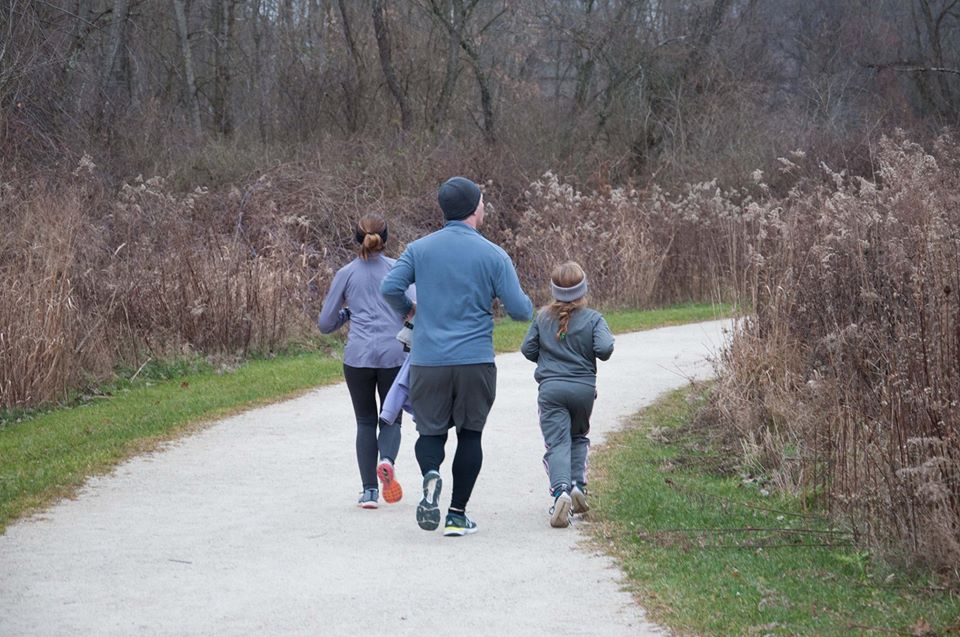 See you next week, from Sippo Lake parkrun in Ohio.

Carrying on, with friends!

When the South Boulder Creek parkrun scheduled for March 14 was cancelled along with all other US parkruns, my running buddy Dave said “Sam, let’s just run everyday until the pandemic is over.”   Dave had just resigned from his job and I’m retired so it seemed like a fun idea … at least for…