Mansfield Ohio parkrun is fortunate that Wes found us. Wes found parkrun and improved his running times. He also built an amazing coat rack and put in a doggy waste can at the parkrun start. As a member of the Richland Trails volunteer group he re-engineered culverts so there is no more ice on the trail . He also regularly cuts back and clears fallen trees, sweeps the trail clean and even shovels and plows the course during the winter snow falls. Best of all, he always has a smile and friendly words of encouragement for all. Wes is locally known as the ‘trail angel’.

Following are some words from Wes, daughters Lana and April and granddaughters Abby and Zooey.

“Serendipity; I really like it! And that is what it was when I saw a sign in a sign shop advertising “parkrun, free timed 5k” and the time and location. I had been running by myself but could imagine the benefits of this group affair. So in June of 2018 I joined my parkrun group. And thanks to our group of 50+, of all ages and abilities, running has become a major priority in my life and of five other family members. I remember when I worried about being able to run the whole 5k and now I worry about getting an age group 1st place when my family goes to run a big sponsored race. I have become a race brat (a good thing).

Linda, my wife, and I were exercising at a gym and I was telling her what a good thing parkrun was but she kept dragging her feet, not a good thing for a runner to do. Finally, in March of 2019 she attended her first parkrun and walked the course. Now she enjoys running the whole thing. After six months of parkrunning she has lowered her cholesterol medication by half (a good thing).

My daughter Lana says: ” My dad came back from parkrun and kept talking about how great it was and such a friendly group of runners. It sparked my imagination. I had not run since middle school, 27 yrs. ago, but quickly became comfortable with the parkrun group. I really enjoy going for coffee to socialize after a great run.” (That’s another good thing.)

My granddaughter Zoe (13) will tell you: “I got started running because my family thought it would be a good idea for me to be more active. After lots of convincing I attended my first parkrun on 9/22/2018. I am very glad I did.”

From April: I first came to parkrun so my daughter could participate, and my plan was to sit at a picnic table and wait for her. However, the positive attitude of everyone made me think-”why not at least walk part of the trail since I’m here.” As weeks passed I began doing a run/walk combination. Now, I can run the entire 5K! I enjoy Park Run because everyone is very encouraging. People are at many different levels of ability, but it doesn’t matter. What matters is you are there giving your personal best.

From Abby: I came to parkrun for the first time after being invited by my grandpa. I liked how nice all the people were. I like going to Park Run rather than run on the roads because I get my runs timed which push me to to better each week. The structure of having a run planned for the same time each week helps me get up and get in one more run.

We’re so happy that Wes and his family found us! Please come and meet them when parkrun re-starts. 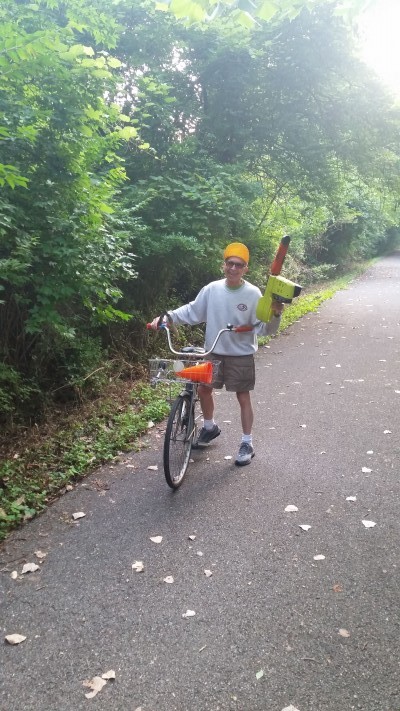