For Canyon Rim Trail, the wait is over!

We’re two weeks into our post-COVID return and we’ve welcomed 17 parkruns back so far.  Social media feeds are filling with lots of runners and walkers parkrunning again and we are thrilled to see so much positivity. Of the events that were held last Saturday, one was a bit different.  That event was Canyon Rim Trail parkrun in Twin Falls, Idaho, that held it’s first ever event!

“Originally we were scheduled to launch March 28th last year” explained Rene Enock, who is one of the co-EDs.  Canyon Rim Trail was one of the event’s that wait.  We did a piece during the pause to very briefly introduce the parkruns that were ready to go until we all went into lockdown.

For Rene and Adam, they had all the training, equipment and their website was online.  With 2 weeks to go before the launch it wasn’t all that surprising to them when it was cancelled.  Rene told us that it wasn’t an absolute shock.  “It was very sad but we knew it was coming”.  It was clear from the news that it was on its way. So while it was a jarring, it wasn’t a total surprise as Rene explained. “We thought it would only be a month or so, but as we saw it turned out to be a 14 month wait”.

Co-ED Adam Enock was first introduced to parkrun in England and grew up with the series, participating with his Dad at Bromley parkrun.  A stint in Australia cemented his fondness for the events and after moving to Idaho with Rene, Adam felt it was important to introduce parkrun to his new community.

It was in Fall 2019 they reached out and worked with parkrun ambassadors on what was required to bring the event to Twin Falls and by November they had been holding weekly test events. 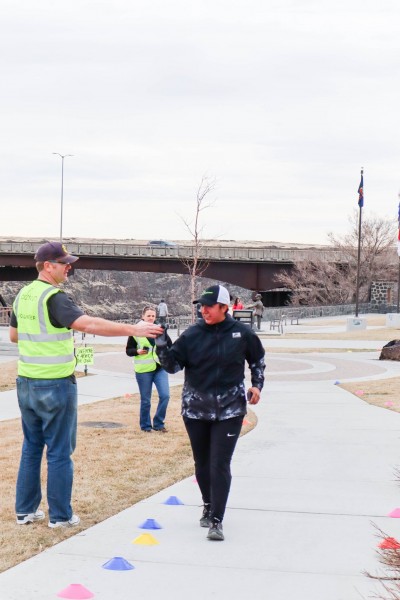 “From 15 people at the first event. It organically grew to 85 weekly” Rene remembers.  She continued to describe how it was the positive, welcoming environment that was the driver behind the growth and countered the windy and cold winter that is typical of the area.

Fast forward to May 2021 and it came time to prepare for the first event, except it wasn’t the slow and careful preparation that you might expect.

“We were out of town the week before so it was a case of loading the car at 10pm the night before!”  Adam and Rene were thankful for their preparation in their practice events and the time they had to get familiar with the equipment, which made the last minute packing for the event not so frantic.

The day itself was a great success but it did not come without its fair share of surprises!

“We obviously were expecting challenges and surprises, especially with our first event but what we didn’t expect was a charity base jumping event to be happening right beside us!”  When Adam and Rene drove into the parking lot they couldn’t believe their eyes when they saw the setup for the charity event! 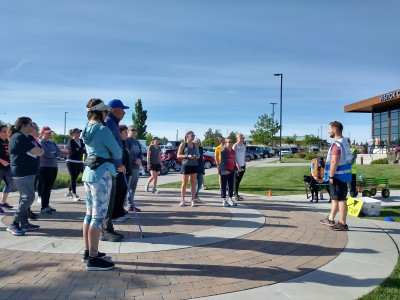 Thankfully, the base jumping event turned out to be a good thing.  It was great exposure for them as there were many people coming over and asking what this ‘parkrun’ thing was!  They also got a piece on local TV station KMVT which aired across the city.

The first event hosted 27 participants, and aside from their parachuting neighbours it all went really smoothly. 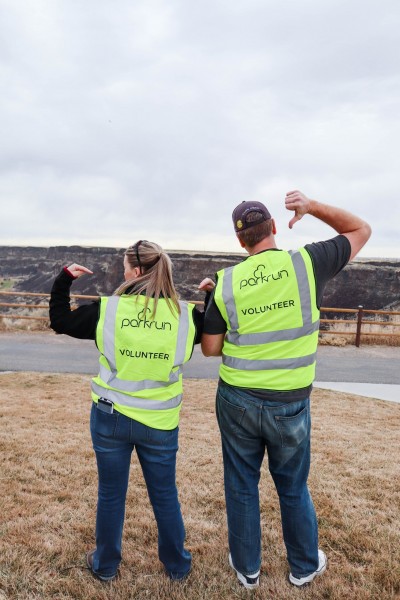 When asked how they dealt with any issues, Adam explained that they had a bit of help.  “Chris Cullen from Boise, ID, came down and he really helped because he is an experienced event director who helped set up and operate Rock Creek Trail parkrun in Portland.  He was really useful!”

They also had an 81 year old ex-Olympian shot-putter who really enjoyed himself, and will invite his friends along next time!

Overall the event went down really well and Adam and Rene are both thrilled and relieved, and get to do it all again next week.

USA-wide, we had 927 participants over 17 events.  This week we expect to welcome four more events to return.  Please check with your local event on their news or social media channels to confirm!

We hope you have a great weekend parkrunning or (not)parkrunning! 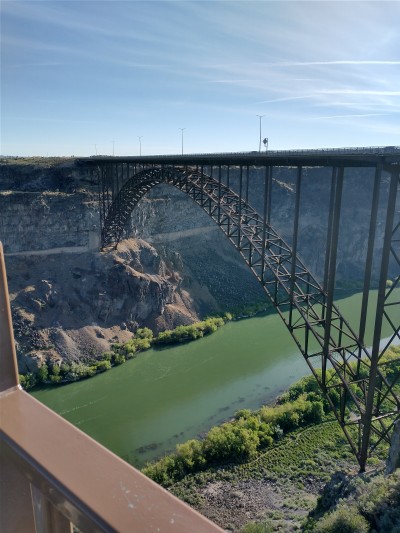 We have some great snippets from parkrun’s across the USA since we restarted.  You have been posting lots and lots on social media and we love seeing them!  Here’s a great selection that came through:   A brand new parkrun!  We’ll have a profile of Utah’s first event in a couple of weeks, but a big…