In mid November, avid parkrunners Kim Goetsch and Richard Atkinson (whose home run is Greenpoint) celebrated their wedding in Riebeek Kasteel. Several wedding guests and the groom took the opportunity of doing the nearest parkrun in Malmesbury on the morning of the wedding, where they were warmly welcomed by the Malmesbury parkrun team. We knew we were in good company when it was noted during the speeches at the wedding that amongst the couple’s many life achievements was their recently jointly attained 50thparkrun milestone (achieved at Century City). The wedding guests and couple amongst them had completed more than 500 parkruns!

Today at Roodepoort parkrun I witnessed first hand a spirit of parkrun I had not previously seen. In the pre run announcements a call was made for a volunteer to guide a disabled runner. I was set for a PB today having trained hard all month so I took little notice. Just before the horn they called again for a guide and I thought nobody was going to volunteer, so I did.

I was humbled to walk round the course with a very brave young woman Jessica Grib who has been blind since birth, has hearing problems and other medical problems but who still gets out and DOES it. We did it in 50:20 and I met up at the finish with her blind friends and their guide dogs.

She is organising a special braai event next Sunday to raise funds for the SA Guide Dog Association and all sighted attendants have  to be blindfolded and will pay “peeping” fines.

Hermanus parkrun launched on 31 October 2015 and on average the turnout at 8am every Saturday is over 300 parkrunners, including both local and international visitors.  We expect this number to more than double over the holiday season.This year we celebrated our 100th parkrun and our second birthday and we have a very special occasion on Saturday 25 November when Oom Willie took part in his 100th parkrun, all of which have been at Hermanus.  He is the first Hermanus registered parkrunner to achieve 100 parkruns. On 28 November Oom Willie also celebrated his 90th birthday!  Oom Willie is one of our regular volunteers at Hermanus parkrun where his task is that of tail walker.  He is well known and loved by our parkrunners.Oom Willie said “I came first in  my age group (85 to 90) – and also last  – on each occasion ! Surely this must be some ridiculous kind of record? I have enjoyed every parkrun, I enjoyed being tailwalker, and always tell people that your team of volunteers are just amazing. I am just a simple old walker, but thrive on the thought that I can be a small part of such a team from time to time. I am not going to stop at 100!”Congratulations on your achievements Oom Willie and thanks for your passion and commitment to Hermanus parkrun.Lots of love from the Hermanus parkrun team 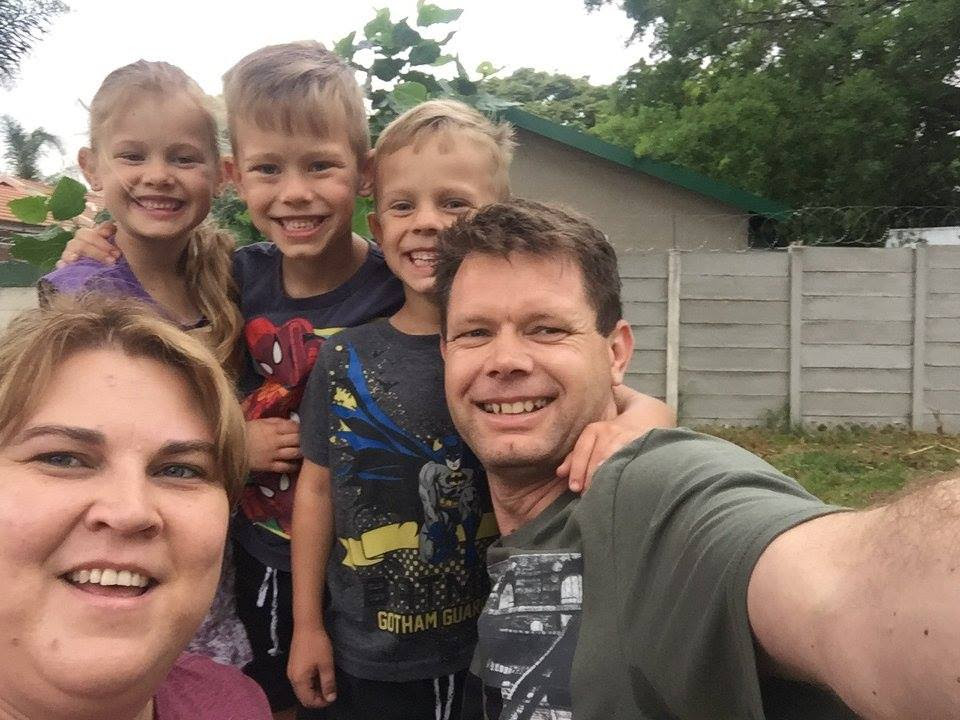 The Vorster family recently completed their first Bronberrik parkrun together – Mom, Dad and all three triplets! 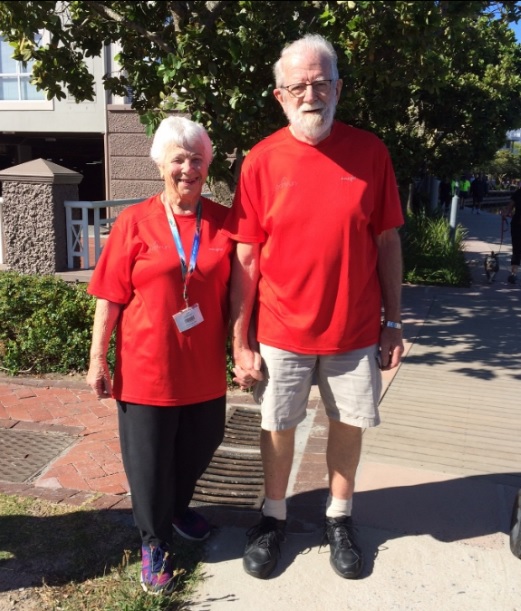 Yvonne and Alan Collins are regular Century City parkrunners. They have both done 80+ parkruns and in January will have been married for 55 years. Their love and enthusiasm for parkrun (and one another) is inspirational. 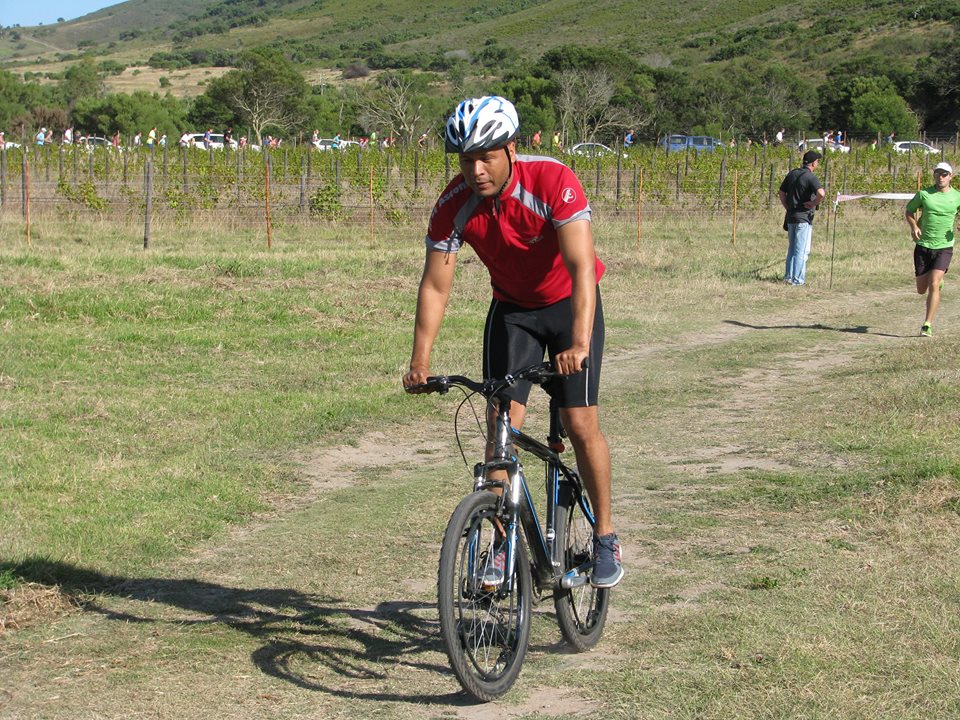 It was a glorious summer morning in December 2015. Everybody was geared up for the influx of holidaymakers and resultant higher number of participants and first timers at Hartenbos parkrun. However, it was also one of THOSE days which started off with many people arriving late due to a bicycle race in town which caused significant traffic delays and also the sound system that decided to go on strike.
As I scanned the crowd of eager parkrunners I noticed a group of young guys with their Kovsie T-Shirts. It was something about the energy they exuded and animated way of talking that made me think they could be extra fast. So I walked over to our Lead Biker of the day and said to him, “Ek dink jy sal daai fiets ekstra hard moet trap vandag William want daai Kovsies lyk vir my WARM.” William is Mossel Bay’s own crowned Strong Man champion and therefore super-fit and super-fast on his bicycle.
When the Run Director said “GO” the Kovsies went straight into turbo-charge mode. We then heard somebody shouting “hulle hardloop verkeerd!” It later transpired that the Lead Bike’s chain came off and due to the striking sound system the Kovsies did not hear when the route was explained during the announcements. They therefore ran straight instead of taking a turn to the right. They were so fast that they did not even see the marshal who tried to direct them. Werner, the Run Director went on this Olympic-challenging sprint with his longish shorts flapping around his legs, arms waiving like mad and shouting with his already hoarse “striking sound system voice” to redirect the Kovsies. Fortunately the astonished marshal recovered quickly and made sure the next batch of parkrunners followed the correct route.
Another participant interrupted his running for a while to assist in refitting the bicycle chain – also in an Olympic -challenging time. Fortunately the second marshal realised what was going on and managed to redirect the Kovsies. They took it in their stride, turned back and overtook the other runners again with the Lead Bike now in hot pursuit. He eventually caught up with them and there were no more wrong turns taken.
As Werner came back he found me busy picking up the things he left behind – first the striking microphone, a bit further the clipboard with the announcements and lastly the sandals he was wearing. His words were “I don’t think I have ever RAN so fast in my whole life”. As William came back his words were “I don’t think I ever CYCLED so fast in my whole life”. I said, while handing over Werner’s things, “I don’t think I have ever WALKED so fast in my whole life”!!!!
The Kovsies came back last December and did only the normal 5 km route and we hope to see them again this year.
Ita Janse van Rensburg
Hartenbos parkrun