I love volunteering at parkrun. I love helping my community, and to watch everyone have fun puts a smile on my face. I started volunteering at parkrun as a remembrance of my granddad. He volunteered at parkrun for about three years before passing away. It was his passion. And I want to share his passion with him. I do not only volunteer because of my granddad but also to keep those who run /walk safe and happy as they pass by.
Tandice Rynhoud (Rietvlei parkrun) 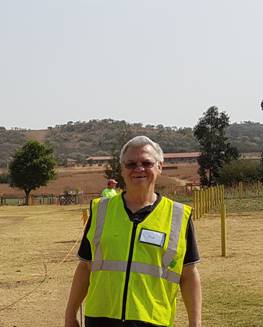 Paul Engelbrecht was a huge asset to Rietvlei parkrun and has sadly passed away.

He supplied the clock at the finish line and helped set-up every week.

He also repaired the stopwatches and was always willing to help out wherever he was needed.

According to the statistics on the parkrun website, he did the following:

He won Central Gauteng Athletics Award for Technical Offical for Road Running of the year 2017.

He was also the Development Coach at Central Gauteng Athletics.

He was a well known referee.

He will be sorely missed by all members of CGA, Rietvlei parkrun and a lot of athletics club members and his family.

Every now and again you meet someone who inspires everyone they meet.  My mum, Cheryll Strydom, is just that lady.  When she was young she didn’t have the opportunity to do sport.  So you can imagine that running or walking as a sport was very foreign to her.  Just over 50 parkruns ago, mum joined us at Piggly Wiggly parkrun in the beautiful midlands of KZN.  When she first entered it took her roughly 1 hour 15 minutes to complete the course.  She was exhausted.  As time went by she started looking forward to her Saturday mornings at Piggly Wiggly.  Dad was very ill at the time, so couldn’t join her, but used to sit at the finish, every week, to watch her come in.

A few weeks ago mum did her 50th parkrun.  Sadly Dad has passed away so he couldn’t cheer mum in, but we know he would have been very proud of her.  This was a very special day for Mum.  Some of her grandchildren and children joined her on this special morning, to encourage her on.  She even did the notorious Piggly Pollies in under 4 minutes. Well at the brilliant age of 74, mum came in, in under 50 minutes.

You must see her smile, when as she comes toward the finishing funnel, and weekly she gets a chorus of – “Come on nannie, Go Ouma, You go girlfriend”.  She’s an amazing lady and inspires each one of us every week.  Thank you Rosemary and Tarryn, for making this parkrun possible, for us all at Piggly Wiggly parkrun. 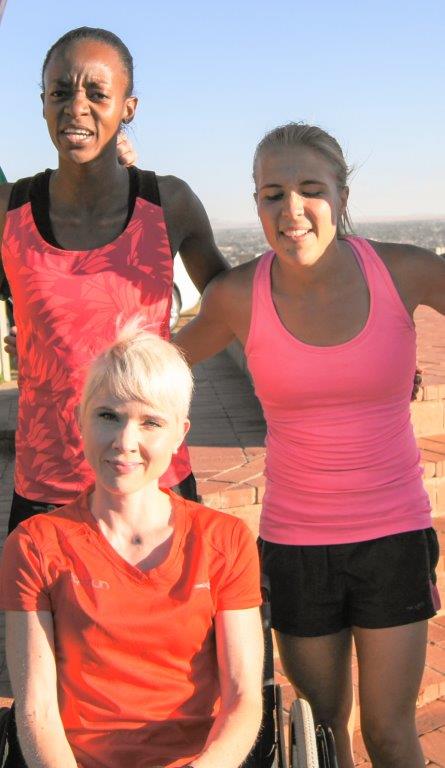 Two of South Africa’s foremost and world class middle- and long-distance runners, hailing from Bloemfontein, Kesa Molotsane and the blind record breaker, Louzanne Coetzee love running and joining in the fun at the parkrun on top of Naval Hill in Bloemfontein.

Kesa, who distinguished her as South Africa’s best middle- and long-distance senior female athlete, says her coach, Sarina Cronjé, incorporates the Naval Hill parkrun in Kesa’s training program as often as possible as she enjoys the vibe of the event.

Coach “Tannie Sarina”, as Kesa calls her, is one of the best runners South Africa has ever produced. She ruled the track, cross-country and road races in the country during the late 1970’s and early 1980’s.

Molotsane is the current Spar Ladies 10km series for women champion and represented South Africa at the world cross-country championships earlier this year, to mention only two of her great performances during 2017. Sarina takes part in Naval Hill parkrun as often as she can as well.

The completely blind Louzanne, who runs with the assistance of a guide, uses Naval Hill parkrun often in training runs. As in Kesa’s case, Louzanne enjoys the camaraderie and social side of the event tremendously. Louzanne is the current world record holder for completely blind female athletes (T-11 category) in the 5000m with a time of 18:14 and possesses the fastest half-marathon time in the same category of 1:27:45.

The highly inspirational lady in a wheelchair, Lize Botha motivates each participant at the Naval Hill Parkrun to complete the event and do their best when she rocks up in her wheelchair to do the parkrun most Saturdays.

Lize states: “I love the Naval Hill parkrun. The atmosphere is fantastic, and everyone is so positive and encouraging towards each other. It means so much to me, and even though I can’t walk, I still have the ability to do a 5km parkrun, even if it is in a wheelchair. It also means a lot to me when people come up to me to tell me that because of me, they started exercising and they see me as a source of inspiration. When I started out in 2015, my first recorded time was 52:54 and my Personal Best (PB) for that year was 45:17. In 2016, my PB was 44:46 and my best time thus far in 2017 is 38:50. I am continuously attempting to improve on that, and I am close to my objective! My current time is 39:15.”

Lize received her 50 parkrun T-Shirt a couple of weeks ago.

Join us on Naval Hill as a parkrun tourist and experience a parkrun that caters for all!