On 27 January 2018, Ebotse parkrun said goodbye to one of their core volunteers, Nathalie Murray.Nathalie, by happy coincidence, joined the 50 club on that day, also having clocked 40 volunteer occasions.It was a long road for Nathalie to get to 50 runs, having started in March 2016 but managing a mere 10 runs in 2016.But then, what turns out, a “lucky break”:“I slipped and fell early January 2017 outside of the shops, breaking my foot in two places. While I was recovering, I remembered Gary Jackson, the Ebotse parkrun Event Director, appealing for volunteers at the start of every event. So I decided that I would volunteer whilst being out of running action, not realising that this would be the beginning of a love affair with parkrun volunteering!”Nathalie then quickly became one of our core volunteers, achieving 40 volunteer occasions in under 10 months, missing only the weekends when she was on holiday.“Volunteering at Ebotse parkrun enriched my life, we have such a wonderful group of core and regular volunteers, and we all have become great friends, a true parkrun family! Libby Abelho, our volunteer coordinator, keeps us all driven to volunteer regularly, and keeps challenging us to try new roles and new responsibilities.”Due to her emigration to Belgium, we therefore say goodbye with a heavy heart, but Nathalie promises to do her best to get a parkrun up and running in Belgium. “I just can’t imagine not getting up at the crack of dawn every Saturday to get to parkrun, so I will have to stay in touch with parkrun head office, who have unfortunately advised that Belgium will not be on the launch list until earliest 2020. I will just have to keep at them to make sure I can help start it up in 2020, or earlier!” 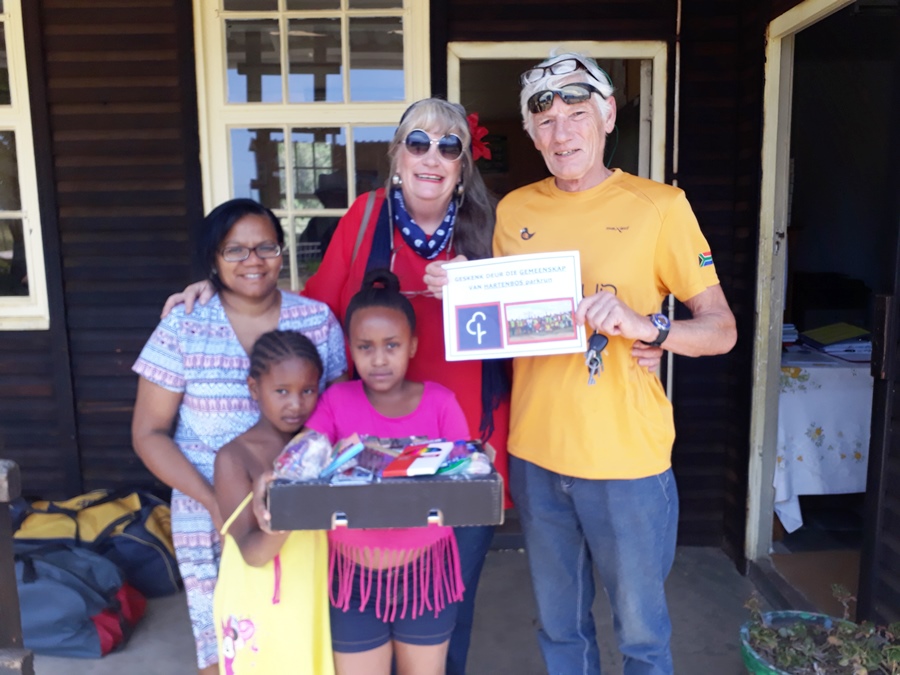 We launched an initiative at Hartenbos parkrun over December where we asked our parkrunners to each contribute one item of stationery. We would then donate it all at the beginning of the school year to assist students in need. We didn’t anticipate the response we received in our wildest dreams - everyone really and truly opened their hearts in a spirit of giving.

Because it was holiday season these contributions came from all corners of the country.  We had a box at the “finish” for three Saturdays and it was filled every week, meaning that we had to empty it for the next week.  The idea was for the initiative to run until 23 December but even afterwards the stationery still kept coming in. For a few weeks our spare bedroom looked more like a stationery shop than a place for guests, with the nearly 2,000 items we collected!  These were donated on behalf of the parkrun community to six schools in and around Mossel Bay who accepted it with appreciation.  It was a very fulfilling and humbling experience for us all. 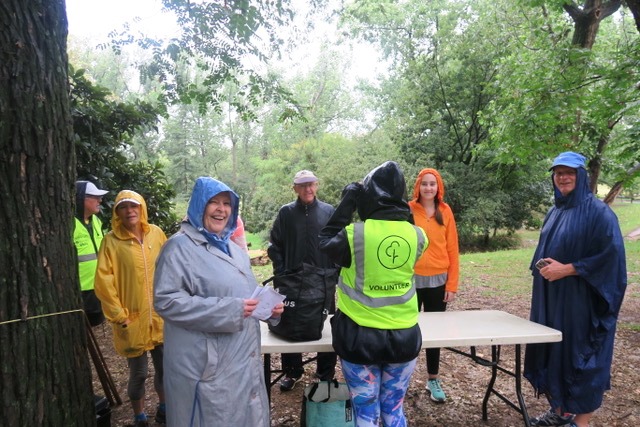 On Saturday 27th January, I woke to lightning, thunder, and rain lashing down. Delta parkrun was due to start in a couple of hours, and as the morning’s Run Director the scenarios were playing through my mind: would the lightning necessitate a cancellation, disappointing the 2,000+ runners in attendance at each of the previous two events? What muddy, boggy conditions would runners encounter on the route? How many runners would turn up?

The least of my worries was about the volunteers. When I arrived at Delta an hour before the run start, I found a group of volunteers huddled under umbrellas in the car park. It was still raining steadily, but the lightning and thunder had moved off and together we decided that the run would proceed pending a check of conditions on the course. A couple of volunteers were dispatched to inspect the known problem areas. They soon returned with positive reports, the volunteer team sprung into action and in no time we were ready to host the day’s run. By 8am, the rain had let up resulting in pleasant running conditions.

There’s no other way to say it – the commitment, advice and support from the day’s volunteers was fantastic. The 50 run milestoners were able to celebrate their achievement; first time parkrunners enjoyed the experience, and parkrun visitors from the UK completed an international event.

Volunteers, you made lots of people happy – you are the best!

Potchefstroom parkrun has been honoured and privileged to have hosted an official freedom run on Sunday 12 November 2017. This run was as a result of the founder of parkrun, Paul Sinton-Hewitt being in South Africa on this specific weekend. Not many know that Paul attended and matriculated in Potchefstroom from 1973 to 1977 and at Potchefstroom High School for Boys, or College as it was known. As an Old Mooi he attended his 40th Matric reunion at the school on Saturday 11th November after completing an early morning parkrun at Delta Park as it was their official 6 year anniversary.

We were 65 eager runners who joined Paul and his wife Joanne in a very memorable event and with the smiles on their faces afterwards I believe possibly a highlight on a very hectic weekend. As usual a hearty thanks to the volunteers and especially to our Event Directors, Sannet Kirstein and Johan Steyn who organised this run, and also Sheila Labuschagne (teacher at the school) who coordinated the arrangements.

Thanks are in order to the 5 Old Boys from out of town who also joined us in the Sunday run.