Lonehill parkrun was visited by the SA Hockey Mens Squad who are leaving for the Commonwealth Games in two weeks time. The team ran with the field and were very friendly and added a great atmosphere at Lonehill’s 200th parkrun.

The squad’s coach, Tommy Hammond said “The atmosphere was awesome and we really enjoyed it, it’s great to see community coming together and supporting each other. Congrats again on your 200 event.”

I live in Cape Town, and my home run is Constantia Greenbelts.

Visiting my son in Jo’burg,we left on a camping trip on Friday morning with him and his 2 daughters to the Mahai Camp in the Drakensberg, Royal Natal National Park. And as we booked for our two night stay there, my son pointed out the parkrun poster!  So we went to do a recce, and found that the parkrun was 4 km from our camping site.

Early Saturday morning I jogged the 4km to the start at Cannibals Cave – and after a while a whole lot of kids arrived – Musi collects kids from all over the Bonjaneni village to come and run. In the village they have about seven young Belgian volunteers who are doing their 3 month teacher internship in the village before going back to Belgium to graduate – they are such fun and gave such a spirit to the event!

The run has the most spectacular scenery in the mountains! And these little kids run so well! A little 7-year old girl, Amanda, kept me company, and finished the run just behind me in 32 minutes. There were lots of lots of little kids who were ahead of me too!

Steven the game ranger came to run, as well as another couple, Cheryl and Bryan (visiting from Benoni) from the Mahai camping site. Such a happy, friendly atmosphere!

Such a lovely surprise to find parkrun in the Drakensberg! 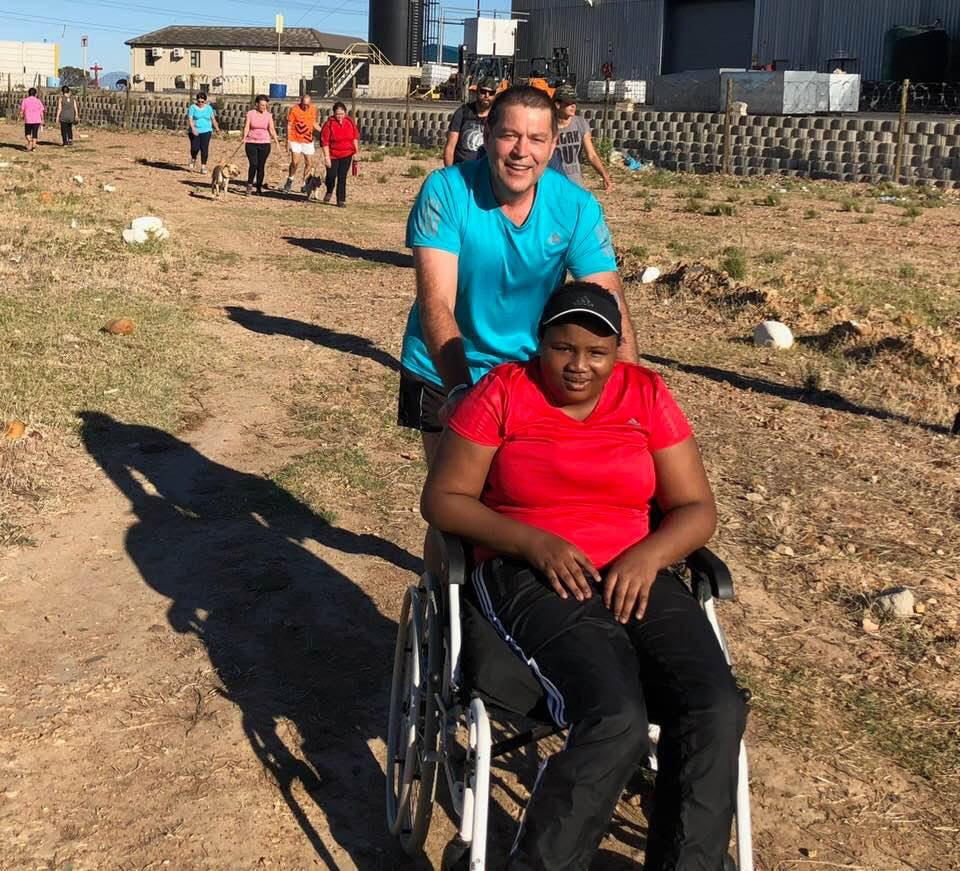 At the age of 54, in August 2015 after suffering from pains in my left arm, I received the unexpected and shocking news that I needed a five-way bypass operation.  After enduring a 9-hour open heart surgery, and some slow steady recuperation, I decided to fight my way back to health by starting to run on my own.  Four months later I found out that three of the bypass grafts were not successful and that I needed five stents to be fitted. This brought the total number of medical interventions to a nice round number of ten; five bypasses and five stents. With the repairs successfully completed, I asked my cardiologist if I could start running again, he said: “Go ballistic”.

I had heard of parkrun and was happy to see the Somerset West one launched. I jumped at this opportunity to run the 5 km run every Saturday and have now completed 50 runs with a personal best time of 33 and a half minutes. I’ve had some memorable times, made some great friends and enjoyed every moment. As crazy as it sounds, I can’t wait for the alarm to go off every Saturday, so that I can be there at the start. As a previously declared “non-runner”, I would never in my wildest dreams have imagined myself doing that!

To celebrate my fiftieth race, I invited a good friend of mine, Baphilele Ncaphayi to join me on today’s run. Baphilele had cerebral palsy as a baby and as a result is confined to a wheelchair.  What a joy it was to share being outdoors, in a world of activity so alive with possibilities and with an awesome crowd of fellow travellers.

Thank you, Somerset parkrun, for making this possible. 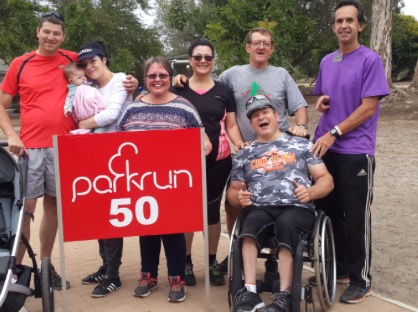 Jaco decided to accompany his wife Riani to parkrun at Bellville thinking he would wait for her in the car. When they arrived at the park, his neighbour challenged him to do the 5km in his chair. With his wife’s invitation to go along and this challenge, Jaco decided to do it and finished in just under an hour!

Family and friends wished they had a board with the number one for him, but the number 50 was much more inspiring. Jaco says he will be back.