Sophie Grobelaar, or Tannie Sophie, as she is well known in Secunda, is an inspiration to many parkrunners of all generations. She is a regular parkrunner, and never misses an opportunity to volunteer at Secunda and the newly opened Standerton, often walking the route early morning, and doing it again for a second lap as volunteer Tail Walker. Tannie Sophie is always full of energy and dishes out hugs to volunteers and friends she has made through parkrun, and high fives to passing runners. 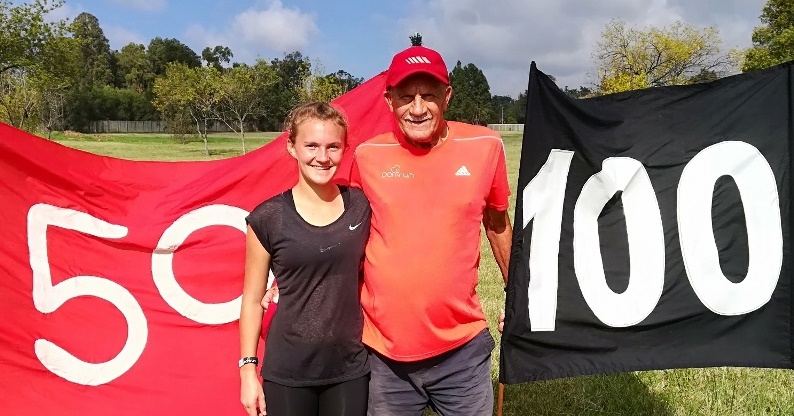 Our Dad & Granddad, Koos Muller has been an adamant sportsman all his life, playing rugby, cricket and many other sports. At the age of 44, he started running to work and back and this lead to him doing road races. This became his passion and he ran all races possible, Loskop, Om Die Dam, Two oceans, Comrades and many more. He also represented Gauteng cross country as a master and grandmaster. However, as we all know, age catches up with you and the body picks up injuries along the way, which forces you to scale down and in the end, stop running.

He lives in Benoni and every year when the Johnson Crane Marathon passed his house he would stand on the pavement cheering all the athletes. Longing to be part of the run.

Then in 2013, his granddaughter Anais started running at school and competing in Cross-country, along with her dad they started going to Ebotse parkrun each week. She told her Granddad about parkrun and challenged him to come and walk with one Saturday. This challenge would change his world. All of a sudden, he felt part of something again; meeting up with old running partners and friends on a weekly basis and running with his family was amazing.

He became an inspiration for us, if Oupa could do it, come rain or shine; we could do it. He was the first to 50, wearing his red shirt with pride. Every Saturday he could not wait to get his results to see what his time was and where he finished in his age group.

Then he set his target on doing 100 parkruns and he wanted it to be on his 80th birthday. We realized that Anais was nearing her 50th parkrun and we managed to plan her run for the 24th March 2018, achieving what hardly any other grandparent and grandchild has done before – running their 100th and 50th parkrun together. What a joyous occasion! Koos received cheers all the way from all the marshals and friends.

parkrun has truly changed the lives of our family and has given an old man an opportunity to compete against himself again. 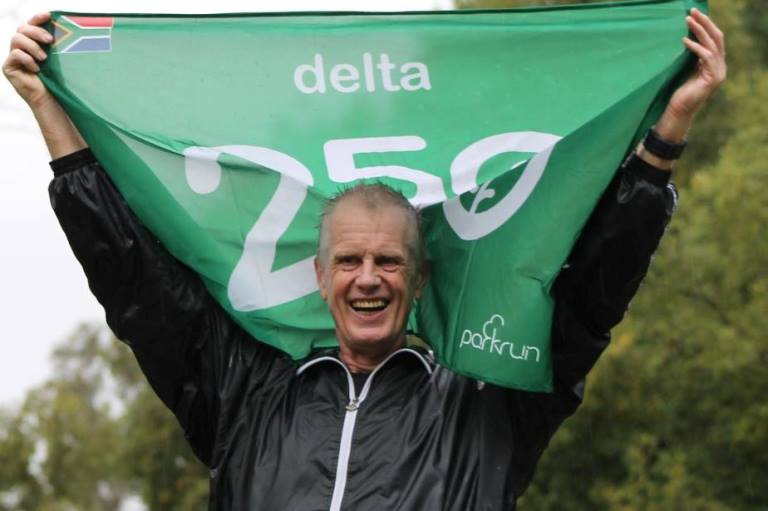 It sure feels great to become the latest member of the exclusive 250 club, although joining the 25 volunteering club the previous weekend may be an even prouder moment – Bruce has indoctrinated me that the purple T shirt is the most important of all.  Although the field wasn’t very big, what a memorable run it was in the pouring rain with the cosmos in full bloom at Delta – definitely one that I will not forget in quite a while – and thanks to the few who aren’t fair weather runners who joined me on the occasion.  Kind of humbling to think that, having done nearly the distance from Johannesburg to Cape Town in parkruns, I represent only 0.005% of the kilometers that South Africans have logged on their parkruns.  So now on for the next challenge of the 500 club.