On route to my marshalling point at Root 44 parkrun I took a photo on my cell phone.  Some marshalls can be seen on their way to another point on the far side of the dam, between the trees. 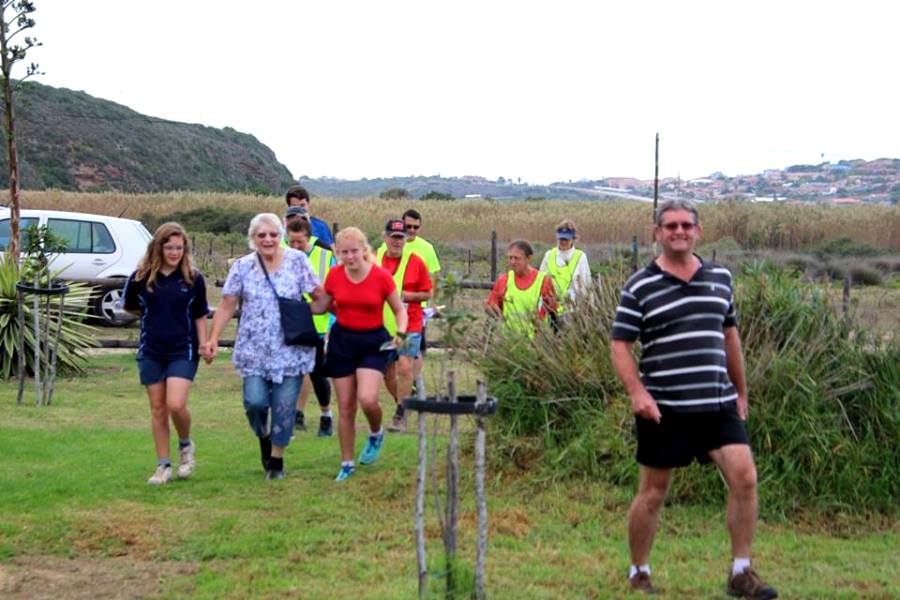 On 14 April, Ron Briant, our tail walker on 62 occasions, experienced one of his most inspirational parkruns to date.

Ron and Clem Nel (our other regular tail walker) were joined by a lady who introduced herself as Lottie Jones. During the walk they chatted on the way and it transpired that it was her birthday the previous day when she turned 79. She accompanied her family to Hartenbos parkrun that morning with the idea of only giving them some moral support – without the slightest thought of participating in the event herself. After all, she was not “dressed for the occasion” neither was she wearing proper shoes for our trail route. However, at the last minute she decided to give it a try and embarked on the epic five kilometers. She walked with Ron and Clem who encouraged her all the way. Lottie finished her first, unplanned parkrun in position 228 with a time of 1:16:24 to the cheers and jubilation of her family and host of volunteers. It was indeed a special day and an inspiration to all who had the privilege of being part of it. We salute you Lottie Jones and hope that you will celebrate your 80th birthday next year with us at Harties. 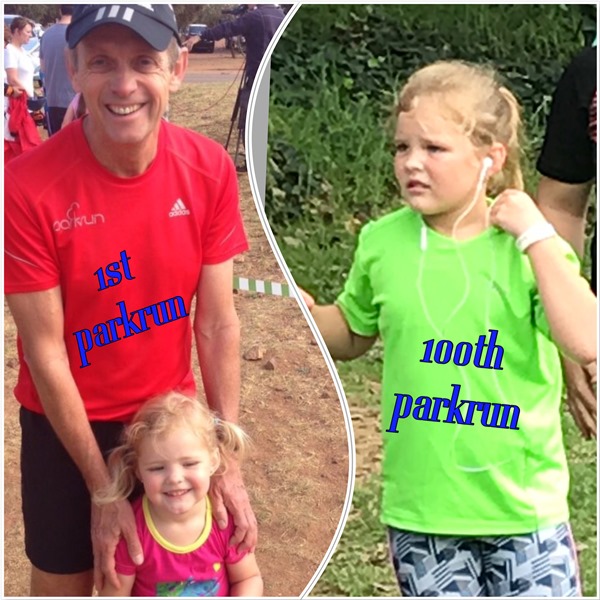 Hante de Vries had a photo with Bruce at her first parkrun at Voortrekker Monument. She has now completed her 100th parkrun at Midstream and is only 9 years old!

Definition of parkrun: a fun way to get fit and stay healthy and meet new people. I have the pleasure of doing the Amanzimtoti parkrun every Saturday. The fact that you are right at the beach to do a parkrun is awesome!

Why Amanzimtoti parkrun? It is a challenge: you have 3.2km on the promenade, where after you get onto the beach and 1.8km is done on the sand. The attendance is on average 250. So at 7:59 all the participants are ready and waiting at the start. At 8:00 when the Run Director, Chantelle Webber, says those words: “parkrunners are you ready? Go!” everyone starts moving. You can shuffle, walk, jog, run or bolt like lightning, but you move. Big and small, short or tall, two-legged or four-legged, as long as you enjoy and have FUN! However, the small ones must be accompanied by a big one, as must a four-legged be accompanied by a two-legged.

The easy part of this parkrun is the promenade; then you get onto the beach!  That sand is a real challenge at times. If the tide is high, then the sand is very soft and not so easy to move on. If the tide is low, the sand is firmer and way better to move on. So participants will look at the tide and know if the sand is easy-going or not. Some participants are lucky to be fleet-footed like a mountain goat on the sand; others, well we dig in those heels and move on. Some choose to do the beach section barefooted and that allows you to move on the shoreline; some choose to keep their sneakers on and do not mind getting them wet. For those who keep their sneakers on and who do not want to get them wet, well we do the ‘Crab Slide’: you run close to the shoreline but if a wave comes you sidestep like a crab to higher ground.

And there is no shortage of volunteers to help out along the route. Cheering one and all to carry on. So should you find yourself in KZN, in Durban, make a stop on a Saturday morning at Amanzimtoti’s main beach and join us for a parkrun.

In late 2017, Linda Lanz, Event Director of Stutterheim parkrun, proposed the idea of a visit by parkrunners to Stutterheim in April the following year to see the rare Cape Parrots. Stutterheim parkrun had been going for nearly 3 1/2 years and had yet to break their record attendance of 162 which was set at their inaugural parkrun on 1 November 2014.

We woke up to an overcast Saturday morning and made our way to the start of parkrun, having earlier collected the travellers coming down by bus from Gauteng.  Spirits were high, with heavy rain we thought we would be lucky to have 80-100 parkrunners – well above recent attendances, but sadly nowhere near the record.

And then something almost magical happened; that unique magic that seemingly only happens at parkrun.  More and more cars kept arriving (including a school bus), more and more people joined at the start

Watching at the finish as timekeeper, I could see the schoolkids arriving and it wasn’t long before we were at the 50 runner mark on the stopwatch … most participants sliding into the finish with a huge grin on their face.

The numbers grew steadily, as the time continued to tick on the stopwatch. A bit of a rush crossing the finish at 150. A crowd of finishers started to gather at the finish funnel … 158, 159 … you could see the next few people in the distance, walking and chatting together. Everyone counted the number of people as far as they could see… Yes, we WILL break the record.  Each finisher was counted down as they entered the funnel by a crowd of about 20 that had gathered.   A huge cheer went up as we hit 163.  We’d done it, and the smiles were wide and infectious.

And before you knew it, finisher 218 crossed the line as tail walker on the day.  What a day, what an experience, what a memory.  #RecordHASFallen.