During December 2015 somebody left a smallish thermos flask behind at Hartenbos parkrun.  I could see it wasn’t a “cheapie” and was still brand new. I took it to parkrun for the next few weeks but the rightful owner never claimed it.  This was even after we posted on Facebook the collection of “lost and found” things which was increasing every week. I assume it must have belonged to somebody who was on holiday over the festive season in our area.  Eventually the flask found a space in the back of a cupboard at my home and was never used for the next two years while it languished there.

When people were asked to donate things for lucky draws for our parkrun’s third birthday the flask immediately made its way into the lucky draw box and I couldn’t be happier when I said goodbye to it.  Some items were kept aside for prizes for the volunteers of the day since they could not qualify for the “normal” lucky draw and the flask was one of the items identified for this purpose. I was asked to assist with the lucky draw. I had the margarine bowl with pieces of paper with the volunteers’ names on it. I would draw the name and hand it over to Glen who had a box with all the lucky draw items and he would draw randomly the prizes to be handed over.  I was as excited as a child when I drew my lovey Clem’s name. And that is where my excitement or my luck stopped because the prize he won was … Yes! You got it! THE THERMOS FLASK! So it found its way again into the same space in the cupboard where it waits for the next call for items to be donated. Of course, just to make sure the next time it leaves my house will be the last neither I nor Clem will make ourselves ”available” for the lucky draw. Or just maybe the rightful owner will read this story and come forward after all this time to claim his lucky flask. 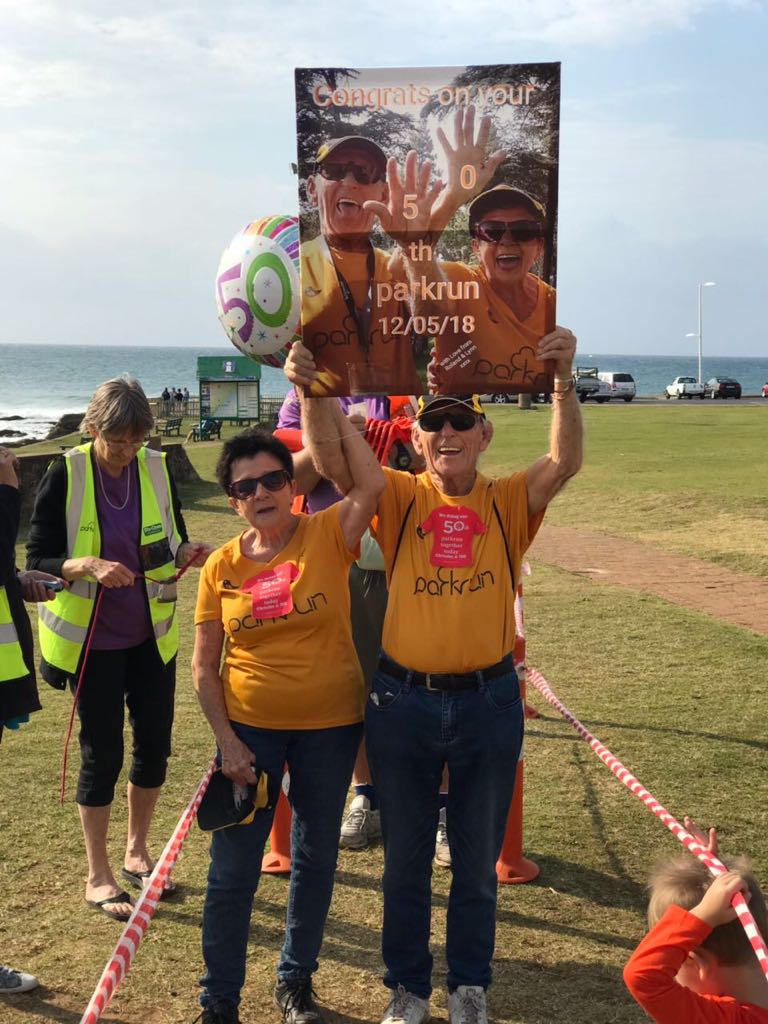 parkrun has no age limit… and you are never to old. On Saturday 12 May  2018, Christine and William Bartle completed their 50th parkrun at Uvongo. Of their 50 parkruns, 41 were completed at Uvongo, KZN.

Roland Bartle and Lynn Du Plooy, volunteers and parkrunners of  Victoria Lake parkrun, Gauteng  and members of the parkrun South Africa tourist group  went down to share the moment with them and make it even more special for them.

As it was Uvongo’s 5th Birthday, it meant cake at the finish line as well.

The couple are both turning 88 this year, William in July & Christine in August. They have completed all 50 parkruns together. Not only have they celebrated achieving their  50th milestone parkrun this year, they also celebrated their 65th wedding anniversary on the 11 April this year.

A total inspiration to all. 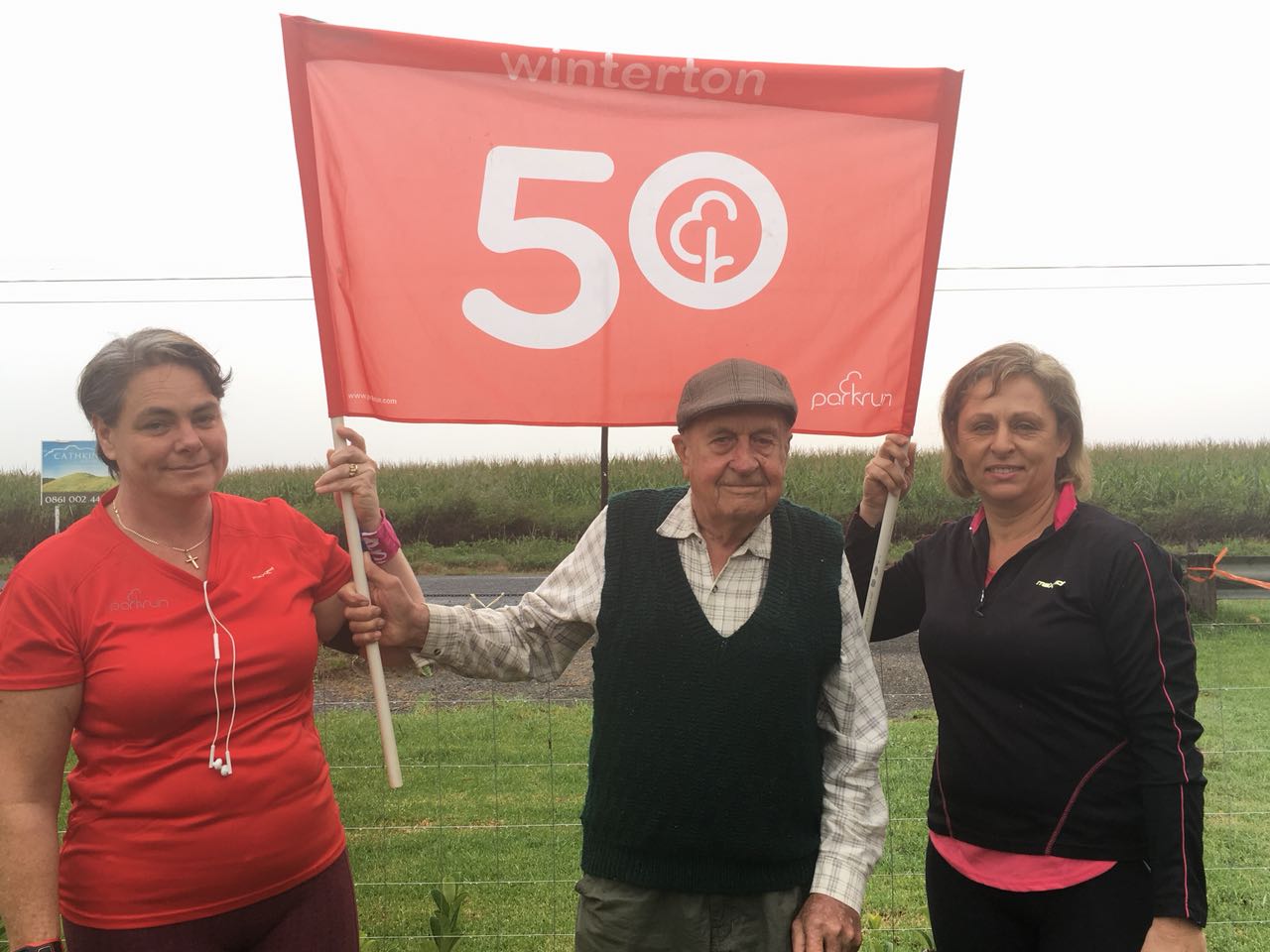 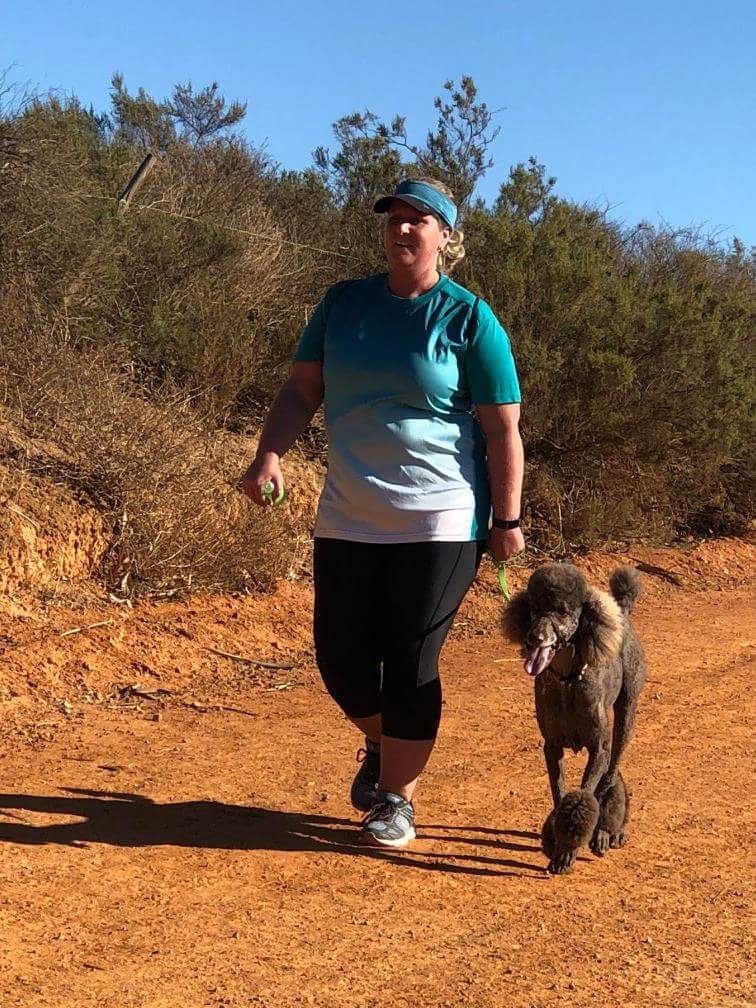 Just want to share the joy parkrun brings to me and my poodle. His name is Dino. He has done every parkrun with me. Thank you for making it pet friendly.

When he sees me putting on my parkrun clothes on a Saturday morning he gets all excited and can’t wait to get there.

My heartfelt thanks to the kind member of the parkrun family at Roodepoort who picked up my phone on Saturday 5 May.

I am forever grateful.