As an avid Comrades runner I had never quite seen the point of parkrun, mostly due to the fact that it was “only” 5km in distance but oh boy was I wrong. After taking part in my first parkrun at North Beach parkrun, amongst over 2,000 participants, the day before my 20th Comrades in 2017, I suddenly realized what a phenomenon it had become.

What amazed me was the total inclusivity of the event, young and old, elite athlete and beginner walker, everyone and anyone was welcome and slotted in perfectly as though the event was being presented just for them.

I’ll never forget the smile of a little old lady still dressed in a night gown and slippers shuffling down the walkway amongst all these people. As though she was thinking to herself “today I am also an athlete”. Needless to say I was hooked.

On arrival back home, we started to look at different routes and slowly began to realise that finding a route that would be safe, suitable and the exact 5km wouldn’t be easy. Then in 2018 after almost giving up on finding a route, Belinda and I went for a jog in Fairy Land, a piece of land above Graskop protected by nature conservation, so-called due to the amazing rock formations found in the area.

We started our run at the Graskop horse stables and after completing an out and back route we stopped at the stables dead on 5km. Needless to say but we took this as a sign and promptly let Clive Smart (regional parkrun SA ambassador) know of our willingness to get an official parkrun going in our little town.

In August 2018 we had our 1st trial parkrun and Clive gave us the thumbs up. Bruce and Gill Fordyce, the driving force behind parkrun SA, already had their hands full with other launches over the next five or so months before they could attend to our launch, which was scheduled for 16th February 2019.

Unfortunately the week before our inaugural we had well over 100mm of rain and ended up postponing the launch due to a flooded route, much to the disappointment of a very enthusiastic bunch of volunteers.

Finally on 23rd February 2019 our day arrived and the Jock Trail parkrun was officially launched. We had perfect weather and a great turnout of 84 participants and 16 volunteers. I can truly say that parkrun never ceases to amaze me. It’s an event put on for the people by the people. Every event we meet new participants from all over the SA and other parts of the world.

The vibe is always positive even after a wet and muddy parkrun and I get such satisfaction seeing a person that has told me they would never run or walk 5km come through the finish tunnel of a parkrun, face beaming with the realisation that they have made the distance. It’s then when I think to myself “yip, we’ve hooked another one”.

Alice Campus parkrun launched on 16 March 2019. The University of Fort Hare celebrated its centenary in 2016. On its main campus in Alice, the university serves as the alma mater of anti-apartheid struggle figures such as the great ZK Matthews, Nelson Mandela, Robert Sobukwe, Oliver Tambo and Govan Mbeki.

The Department of Human Movement Sciences took the initiative to establish a parkrun on the campus as a means to promote an active lifestyle among our students. Research indicated that only 5% of our students are either exercising regularly or participating in sport, primarily due to fear of academic failure. The parkrun is part of our departmental community engagement, aiming to change these perceptions while promoting fitness and health.

Five of our athletes who ran in the first parkrun ran the distance under 15 minutes, which is quite close to the South African record. Although these runners are highly motivated and performing well, their journey as Fort Hare athletics is a painful one.

Coming from a rural and poor background, it has not been an easy road. Siphiwo Ngcenge, who is also a student athlete and serves as the coach of team, started to recruit students with a passion for running in 2016, but due to lack of support some left the institution looking for better options.

The remaining athletes participated in a few races within and outside the Border region. The athletes are facing serious challenge such training and racing shoes, transportation, sports equipment such as cones, skipping ropes etc. The department of Human Movement Sciences is planning to assist them with the sport and conditioning as well as mental preparation for performance in future.

This year, we have recruited short distance runners and have identified a number of students, and looking forward to build and shape the team in all aspects.

Alice Campus parkrun now serves the team with an opportunity to do their time trials. Our athletes find it exciting to participate in the weekly runs. The course is a flat course but tricky at places, with a wonderful view on the surrounding environment. The athletes attend the parkrun every weekend as a team.

Regardless of some of the challenges that their training environment poses, they are taking up the challenge to bring the record to the Alice Campus.

These runners are passionate about their running skills and ability and although they sometimes have to borrow each other’s running shoes, they are very disciplined and don’t miss any training sessions. They are punctual in both their sports and academic work. They like and respect their academic time. Not having access to a full time coach, the athletes appreciate any kind of assistance that they can get.

We are keen to grow parkrun on the Alice Campus among our student population and the wider community in Alice. This is indeed a wonderful opportunity to engage our community of staff and students and create a fun and enjoyable environment for health promotion. 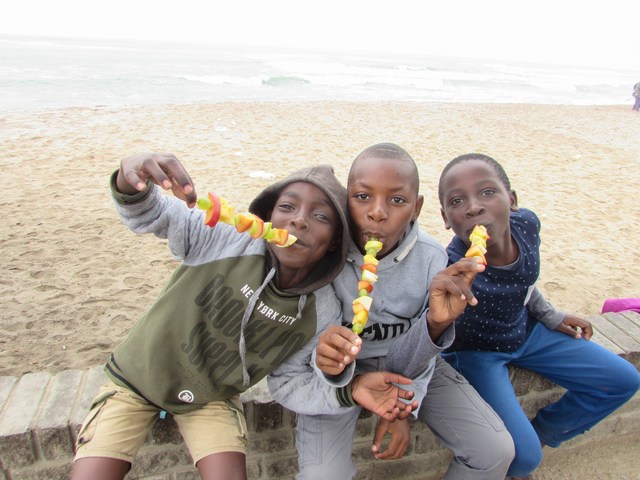 The Mondesa Youth Opportunities kids are still active in Swakopmund parkrun and we had our own celebration of two years of parkrunning with a Picnic Brunch on the Beach!

We had beach games, picnic food, and the lovely singing of the Thank You song with great words of thanks from you and the kids.  I know that every bit of effort was worth it for this dedicated little band of committed and enthusiastic parkrunners.