I was asked by my son, David , whether I would assist at the Roodepoort inaugural as there was a shortage of volunteers. I reluctantly agreed as I had no interest in running at all.

The following week I again volunteered to assist not realising that this would become a habit. It was only after my 121st volunteering event that I started to actively participate in running thanks to the encouragement of my family.

To date I have run 160 parkrun events and still going strong. I have even managed to record a few local age category records including an age category at Porirua and Rotorua New Zealand!

I am currently a runner/volunteer at Alberts Farm Johannesburg. 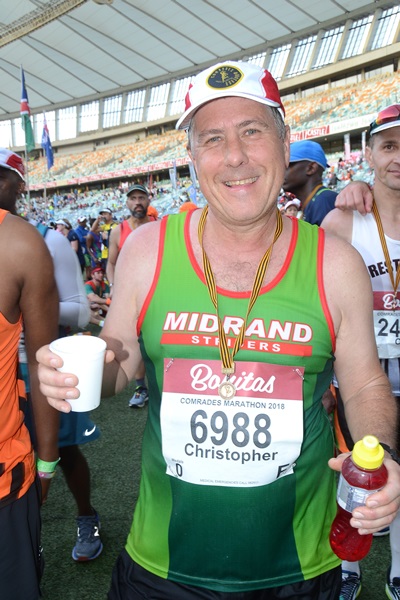 Both my husband and myself have made major lifestyle changes, all thanks to parkrun.

It all began about 3 years ago when my husband Chris became seriously ill. He is 55 years old. He had lost about 16kg’s without even trying.

My husband had always been overweight since we first got married back in 1989. When he described his symptoms to a neighbour, she advised him that it sounded like he had diabetes. A doctor’s appointment confirmed that he did, in fact, had diabetes and his blood sugar levels were dangerously high.

A change in diet together with medication helped him to regulate his sugar, but he was still lacking the one critical remedy to also regulate his diabetes and that was exercise. I advised him that he should try out a parkrun which we both did. From that first run at Lonehill he was hooked which was 2 1/2 years ago.

He subsequently joined a running club. Since that time he has completed two Two Ocean marathons as well as two Comrades Ultra marathons (back-to-back) with bronze medals. parkrun has definitely turned my husband’s life around.

I also love our weekly parkruns. I never used to enjoy running, but have since completed a couple of 10km races and now am training to attempt my first 21km next year. Our two sons aged 23 and 20 also enjoy running with our youngest having completed a few 21km races.

So, thank you parkrun for introducing us to running and changing our family’s life around so that we are able to live a more happy and healthier lifestyle.